Following the recent 5.1 earthquake south of San Jose, the long-dormant Angel Island volcano stirred back to life with the first signs of a new eruption early the other morning. To date, no further tremors or eruptions have been felt, but authorities* are keeping an eye on it.

*Actually any “authority” can witness this if, like us, they’re up for an early morning walk in Belvedere and happen to be in the right place at sunrise.

Usually it’s mariners calling the Coast Guard for help. Right now the tables have turned, and for the next few weeks the USCG is calling out for help from mariners. The Coast Guard is currently conducting a Waterways Analysis Management System (WAMS) study and is asking mariners who frequent San Francisco Bay and surrounding areas, and San Diego Harbor, to answer a questionnaire. The questionnaire seeks to obtain data on the effectiveness of the system of Aids to Navigation.

The first survey covers multiple areas in and surrounding San Francisco Bay, Monterey Bay and Half Moon Bay to assess the current aids to navigation, highlight any waterway concerns, and assess potential impact of future projects to widen and deepen areas within Sector San Francisco.

The second survey is intended to assess the current risks associated with the San Diego Harbor Special Anchorage Area (33 CFR 110.90). Relevant factors include Risk to Navigational Safety, Risk to the Environment, Risk Due to Subsea Infrastructure, Risk to the MTS, Risk to National Security, and Economic Impact.

The survey includes multiple waterway areas in and around San Francisco Bay, so please choose the one most applicable to your area and assist the Coast Guard in reviewing current trends, activities, and needs of the waterway.

The USCG will use this information to ensure that the aids are serving their intended purpose and meeting the needs to provide safe navigation corridors in San Francisco Bay. The Coast Guard also uses the information from all waterway users to assist with maritime transportation system management.

The WAMS Survey will be active until November 20, 2022, and can be found by using the following links: 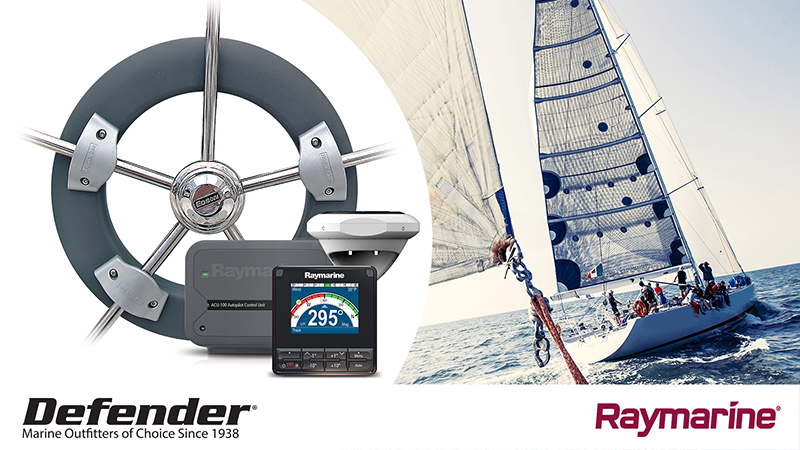 Get your Autopilot Systems from Defender — Marine Outfitters of Choice Since 1938.

Writer and St. Francis YC Staff Commodore Kimball Livingston has an enviable history of writing some of the most informative, insightful and entertaining stories in the world of sailing. He wrote for the San Francisco Chronicle when they covered sailing, and has written about everything from the America’s Cup to numerous great races and great sailors around the planet for many of the world’s sailing publications. There are also several books and the movie Wind among his many credits. He’s also been dedicated to youth sailing and improving the pathway for participation for kids from all corners of society.

We always appreciate seeing sailing break into the mainstream press, and therefore we were happy to see Kimball’s story on the very accomplished Canadian Olympic Laser sailor and SailGP crew member, Sarah Douglass, published in a recent New York Times.

Kimball has been “Sailing the Bay” for decades, but his writing has carried his stories around the world, and his efforts to support participation in sailing have helped many enjoy sailing as much as he does.

As we head into the Halloween weekend, we prepare to flip the calendar page to November and start to plan and sign up for midwinter racing series.

Super Saturday will happen a week from tomorrow, on November 5. What’s so “super” about it? It’s a convergence of maximum midwinter conflict. You will have to choose from one of these, and perhaps geographical proximity or one-design choices will be your deciding factor:

Sausalito YC’s Chili Midwinter Regatta will sail on Sunday instead, starting on November 6.

Having started in October, the Berkeley Chowder races continue every Sunday through March except on BYC Midwinter weekends.

The Berkeley YC Midwinters are among popular series the second weekend of the month, starting on November 12-13. Yes, that’s series plural. Saturday and Sunday each have their own separate competition. Sign up for either or both. A shorthanded division is developing for Sundays again.

The Yacht Racing Association’s Shorthanded Sunday Midwinters will kick off on November 20.

More Midwinter series will join the list in December and January.

Midwinter series aren’t the only game in town during the month of November.

For the teenagers, Encinal YC will host the BAYS High School NorCal Regatta on November 5-6 on the Estuary.

St. Francis YC will welcome Cal and Stanford for the Big Sail on Wednesday, November 16. Students and alumni will compete in the club’s J/22s.

November Is for Turkeys

Turkey-themed regattas, that is. They range geographically from the Turkey Bowl hosted by the Corinthian YC of Seattle to the Turkey Day Regatta at Alamitos Bay YC in Long Beach, both on November 19-20.

Tiburon YC will offer their Wild Turkey Race on November 25 as a refreshing alternative to the Black Friday shopping madness and/or a cure for the Thanksgiving-feast hangover. On the other side of the Tiburon Peninsula, CYC will host a Thanksgiving Pursuit Race the following day, Saturday the 26th.

More regattas and series will be offered in November; look for a longer list in our Calendar in the next issue of Latitude 38, coming out on Tuesday, November 1. For regattas this weekend, take a look back a month at our October Sneak Peek.

With the world adopting a “post-COVID” or “living-with” approach, as opposed to “in the throes of” reactions, cruisers around the globe are on the move and actively seeking out their next long- or short-term anchorage. We recently received an email from a reader, Francene McLaughlin, who was grappling with New Zealand’s policy on returning yachts. Francene said hers was one of several hundred yachts that had been stranded in New Zealand (NZ) during COVID, and that having left the country in June this year, was told she could not return for another two years. She was hoping we might have some information about any changes to this rule that would enable her to return sooner.

Due to border closures around the world, Francene stayed in NZ aboard her sailboat AKA for two years before being able to move on to other destinations. But in applying the rule she describes above, she would be barred from returning until June 2024.

“There’s not much information out there, and trying to talk to immigration NZ is a nightmare. So [I] just wondered if you had heard anything.”

At our last communication, Francene was in Fiji, determining where to go for the Southern Hemisphere’s upcoming cyclone season. The information she had received indicated that NZ was overwhelmed and struggling to deal with around 35,000 pending visas. It appeared that the country was focusing on special visas for sport or employment and not giving much thought to cruisers.

“We are such a small number we’re not even on their radar. But we have a big impact on small towns,” she wrote. “The question is, can returning cruisers (who were stuck in NZ during COVID through no fault of their own) be allowed in and allowed an extension to avoid [the] cyclones north?”

We put the question to our editor-at-large, Andy Turpin, and our chartering editor, John Riise, to see if they could come up with any concrete answers. To date, all we’ve uncovered is from one person who wrote, “My understanding is that immigration compromised on one year away for this group.”

Francene says she has been sailing into and out of New Zealand for 28 years. “Its almost our home,” she adds.

“We don’t use their medical systems, we don’t take up the housing that migrant workers might need. We are not a burden on their country. We’re a bonus. During COVID the cruisers were the only tourists NZ had coming through their borders.

“Lots of us want to come back and spend our money there,” she writes.

As the cyclone season is fast approaching, Francene acknowledges that by the time she has a definitive answer, it may be too late to move down to New Zealand. At the time of writing she said, “It’s nuts, crazy in here with boats hauling out to get bottoms painted. NZ is very strict on having clean bottoms when you come in. They check with underwater cameras. Boats are fueling up and leaving, and cruisers are putting their boats in cyclone pits for the coming season.”

Regardless, she is hopeful that there will be an answer that others can perhaps benefit from. “If this helps someone, just a little, that would be great.”

So our question to you, dear readers, is, “Does anyone have any current information about the real situation of cruisers returning to New Zealand?”

If so, please drop your answer into the comments below, or send us an email at [email protected], subject line “NZ Immigration.” 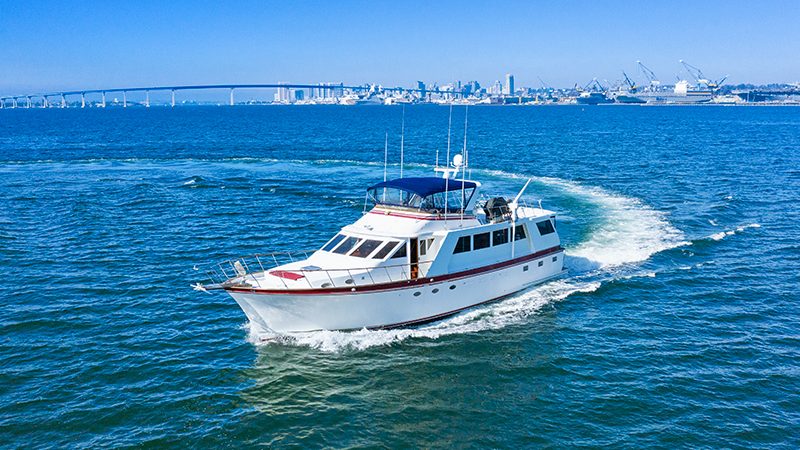 SHARE ON Tweet Share Email Linkedln
Receive emails when 'Lectronic Latitude is updated. SUBSCRIBE
'Lectronic Latitude: Wednesday, Oct 26
Help the Fleet Send Off
You’re Welcome To Join the Baja Ha-Ha Kick-Off Parade on Monday
The 28th Baja Ha-Ha sails out of San Diego on Monday. All sailors are welcome to join the send-off by land or sea.
Sailors' Stories
Good Jibes With Ronnie Simpson on the Global Solo Challenge
Join host Nicki Bennett as she chats with Ronnie Simpson about his 2023-2024 Global Solo Challenge campaign and preparations.
Sponsored Post
Get Your Boat Ready for the Tropics at Ullman Sails
Get your sails inspected and prepared before you leave for Mexico, or anywhere else.
Some Pre-Halloween Whimsy
Fast Race, Cloudy Skies Define Halloween Race
On Saturday, October 22, Del Rey Yacht Club ran their annual Halloween Race.
There's Gold in Them Thar Magazines
Brian Finds Golden Ticket and Wins Latitude 38 Hat
Captain Brian Ackerman picked up his winning 'Latitude 38' magazine "in beautiful Moss Landing," Monterey Bay.
A Classic in Her Prime
A Sailor’s Memories of the 109-ft Herreshoff Schooner ‘Ramona’
'Ramona' was a 109-ft Herreshoff schooner with a steel hull, two diesel engines, a 108-ft mainmast made of Douglas fir, a 92-ft foremast, and 16,000 square feet of sail area.
More 'Lectronics »
Report Listing