The 2020s certainly seem determined to test our resilience. We all know winter brings storms to the Bay, but this year’s season is starting off with more bangs than we need. The cold front that crossed the coast on December 31 brought strong, gusting winds, heavy rainfall, and an unexpected amount of damage in the Delta. Latitude Racing Editor Christine Weaver reported several decades-old trees at Ox Bow Marina had been uprooted and dropped onto the docks and boat sheds.

Nearby Owl Harbor Marina also reported damage. Objects became airborne, five sailboats suffered torn jibs, several dinghies filled with water and were in danger of sinking, and the area was left without power.

The entire San Francisco Bay Area and central coast are on alert for damaging gusts, flooding and landslides as a result of another severe weather system expected tonight. NOAA’s most recent report states the cold front and associated atmospheric river will reach us by early afternoon. Wind gusts of around 40 to 60 mph are expected ahead of the system, with possible 60- to 80-mph gusts in the hills. Heavy rains are expected to occur during the afternoon and into the evening, along with the possibility of lightning and hail. Bay Area news site KRON 4 has this morning reported that Richmond’s Seacliff neighborhood near Brickyard Cove “has been evacuated.” City officials told KRON 4 the evacuation is in response to “a potential slide.”

Basically, it’s sounding wild to the extreme, so if you can do so safely, check your boat. Then go home, check your immediate surrounds, and strap in and hang on.

Welcome back to Latitude 38’s podcast, Good Jibes! Each week, you’ll hear stories and tips from the West Coast sailing community on cruising, racing and just plain sailing. Cast off, laugh and learn, and become a better sailor. Hosted by John Arndt, Nicki Bennett, Ryan Foland, and the team at Latitude 38 — the sailing magazine for West Coast sailors since 1977.

This week’s host, John Arndt, is joined by Dr. Paul Heineken to chat about sailing, windsurfing, kiting, winging, and giving back to the next generation of sailors. Paul is a lifelong competitive dinghy sailor, windsurfer, and supporter of junior sailing. He’s a former commodore of the St. Francis Yacht Club, has served on the Board of Directors of the Treasure Island Sailing Center, and has been a volunteer coach of the UC Berkeley Sailing Team for many years.

Hear how to transition to windsurfing and the like, raise a family passionate about sailing, and start an event in a new sport; how we can make sailing more available, and what’s next for Treasure Island.

This episode covers everything from winging to raising a sailing family. Here’s a small sample of what you will hear:

Learn more about the Treasure Island Sailing Center at https://www.tisailing.org/.

Thanks for listening to Dr. Paul Heineken and John Arndt on Good Jibes with Latitude 38. Subscribe here to receive Latitude 38 at your home each month. 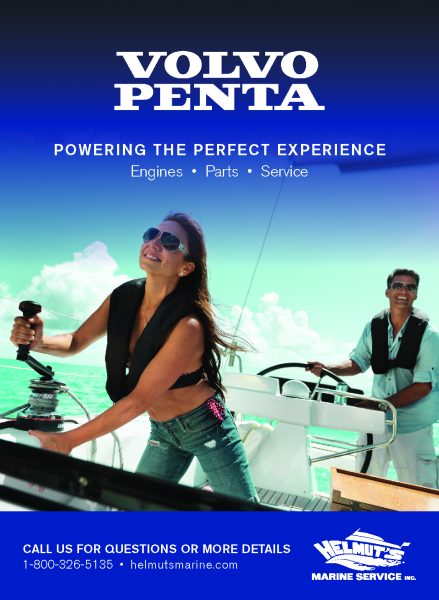 The Cruising Club of America (CCA) was founded in 1922 and is a collection of passionate, accomplished ocean sailors making adventurous use of the seas. All members have extensive offshore boat-handling, seamanship, and command experience honed over many years. The 1400-member organization has no physical clubhouse and is organized among 11 stations throughout North America and Bermuda. In even-numbered years, the CCA organizes the Newport Bermuda Race in conjunction with the Royal Bermuda Yacht Club. The organization also gives annual awards to recognize outstanding accomplishments by sailors. The 2022 awards included three outstanding sailors with California roots or relationships.

Though he’s not based on the West Coast, many of Kenichi Horie’s long list of sailing accomplishments have started or ended in San Francisco. The CCA announced that Kenichi Horie, Japan’s best-known ocean sailor, has been named winner of the CCA’s 2022 Blue Water Medal for a lifetime of ocean-crossing achievement. His most recent voyage began in March 2022, when he sailed alone from San Francisco to Chiba, Japan, at age 83.

The Blue Water Medal has been awarded 95 times since 1923 and is the highest honor bestowed by the CCA. The 2020 Blue Water Medal winner was Randall Reeves, who was interviewed on Good Jibes here. It celebrates “meritorious seamanship and adventure upon the sea, displayed by amateur sailors of all nationalities.” The medal is intended to provide “an incentive for carrying on the spirit of adventure and the upholding of the best traditions of seafaring.”

The CCA has chosen Mary Crowley of Sausalito, California, to receive the Diana Russell Award for 2022. This is the first year the award has been presented. It recognizes a CCA member for innovation in sailing design, methodology, education, training, safety, and the adventurous use and enjoyment of the sea. We’ve written frequently about Mary’s Project Kaisei and her efforts on behalf of the oceans with the Ocean Voyages Institute. The CCA’s recognition of her long-standing commitment to the oceans is well deserved.

Mary founded Ocean Voyages Institute as a public charity in 1979 with the goal of preserving the maritime arts and sciences, the ocean environment and island cultures. She is one of the founders and project directors of the Institute’s innovative environmental mission Project Kaisei. Over the last several years, she has led the project’s teams responsible for removing over one million pounds of plastics from the world’s oceans.

In addition, she is a “serial nonprofit entrepreneur” dedicated to the health of our marine environment, and serving on the boards of Ocean Voyages Institute, WELL Network, and Richardson Bay Maritime Association. She has previously served as the executive director of the Oceanic Society, publisher of Oceans magazine, and on the board of directors of Project Jonah, the Maritime Museum of San Diego, Sail San Francisco, and several other marine-related nonprofits. Shoreside, Mary is a founding member of Planetree, which enhances healing environments in hospitals and healthcare education.

In our September issue, we covered the story of Palo Alto high school student Cal Currier, who became the youngest sailor to solo-sail the Atlantic west to east in 2022. The voyage resulted in the CCA’s awarding Cal the Young Voyager Award for 2022. He accomplished this at age 17, but even more amazingly, he didn’t have a boat or know how to sail when the year began! In January 2022, he decided to sail across the Atlantic Ocean alone and began taking sailing lessons from Spinnaker Sailing Redwood City near his home in Palo Alto, California. Accompanied by his father, he flew to New England and found a modest 30-ft boat.

Undaunted by the seeming enormity of the task, Cal methodically worked through countless project lists, and, on June 27, 2022, set out for his first-ever solo sail — a transatlantic crossing — on his 46-year-old sloop named Argo. The passage took 28 days and spanned 3,400 nautical miles. At age 16, Cal may have been the youngest person to ever make the west-to-east North Atlantic crossing. But what mattered most to Cal was time spent “in the wild,” as an opportunity to grow and to learn from stepping outside one’s comfort zone.

Other 2022 awards from the CCA included the Rod Stephens Seamanship Trophy to South African sailor Kirsten Neuschäfer, the Richard S. Nye Award for contributions to the CCA to Barbara Watson, and the Far Horizons Award to David Tunick.

Congratulations to all these West Coast recipients for their success at sea and the recognition from the Cruising Club of America.

In late November 2022, the City of Alameda held the first of what will be many, many public meetings about a proposed pedestrian bridge spanning the Oakland Estuary, from Jack London Square to the northeastern shore of Alameda.

The City is asking for sailors’ input.

Plans for the bridge have been under study since 2009, though many of us hadn’t heard about the project until a few months ago. The reception was less than enthusiastic. There is still discussion of a water taxi that would service the Estuary, but regardless, plans for the bridge seem to be moving full-steam-ahead. (A water taxi would obviously be limited in hours; the bridge would be open 24/7.)

How tall will the bridge be? How will it affect sailing on the Estuary? How often does the City expect the drawbridge section to be opened on a typical high-water-traffic day (aka the weekend)?

At the November Zoom meeting, we asked these very questions.

The height of the bridge has not yet been determined, but there will certainly be a drawbridge section to accommodate Coast Guard cutters stationed in Alameda. “We’re working closely with the Coast Guard,” an Alameda city planner said at the meeting.

We’ve been wondering what the ideal height would be so that the largest possible majority of boats can pass through on most tides. Would that be about 70-ft? What’s the ideal height for the average size of boats racing on Friday nights?

“We have to figure this thing out together,” the city employee said, adding that “data” were needed.

We cannot stress enough the need for organized advocacy, nor can Latitude carry that particular torch entirely on our own. We hope that someone, or an organized group, can assume the role of “quarterback” and start to marshal data and stakeholders, and lobby on behalf of sailors.

We were one of maybe three advocates for boating at the November Zoom meeting, though a number of marinas and yacht clubs had apparently been invited. There were, however, a large handful — maybe between five and a dozen — of bike-advocacy groups in attendance.

Clearly, there is work to be done.

“Please note that we will be doing much more extensive public outreach in early 2023, and will have more materials for the public to review,” Rochelle Wheeler, the senior transportation coordinator for the City of Alameda, told us in an email. “The city will continue to engage with maritime industry and all interested folks throughout the project development, so now is certainly not the only opportunity for commenting,” she added.

Here’s the official page for the proposed bridge, where you can sign up for updates: www.alamedaca.gov/bridge.

Here’s a link to Rochelle Wheeler’s email if you’d like to make specific comments. You can also reach out to Frank Ponciano, a consultant who’s also taking input on the bridge.

While the New Year may have started, we still have one more Sailagram feed from 2022 to share with you. It was a great year for sailing, and we want to thank everyone who contributed photos to our Sailagram feed over the past 12 months. 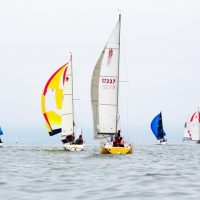 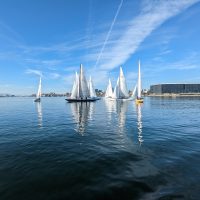 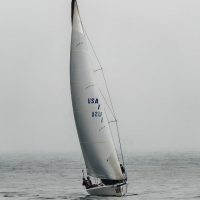 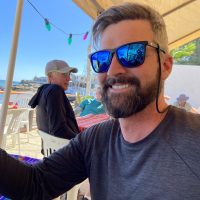 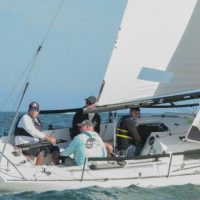 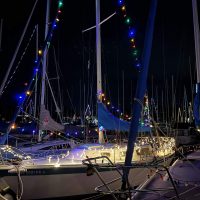 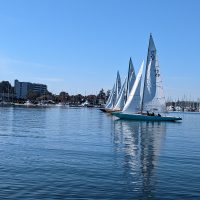 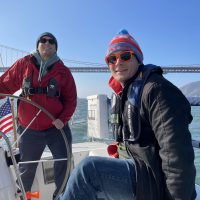 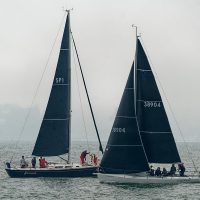 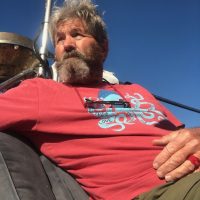 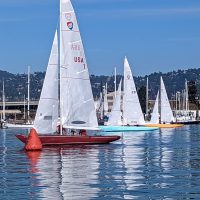 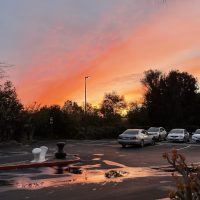 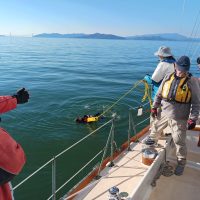 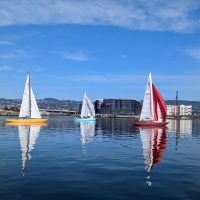 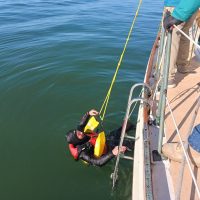 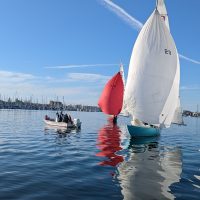 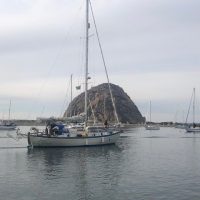 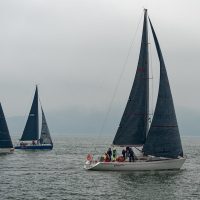 View Slideshow
1 2 3 ►
We look forward to seeing your sailing photos each month, in 2023. Email them to [email protected] to be included.
SHARE ON Tweet Share Email Linkedln
Leave a comment
Receive emails when 'Lectronic Latitude is updated. SUBSCRIBE
'Lectronic Latitude: Sunday, Jan 1
Happy New Year!
May 2023 bring you good health and happiness, and everything your sailing heart desires.
More 'Lectronics »
Report Listing