We often write about the critical pieces of marine infrastructure that keep local boating alive. These include access, launch ramps, marine services, waterfront development and much more. There’s one other important piece of infrastructure that’s incredibly important, and that’s the people and organizations who support sailing/boating on San Francisco Bay. All the issues that threaten boating require people and organizations to solve them. We recently attended the Pacific Inter-Club Yachting Association’s Commodore’s Ball and Installation of new, 2022 officers dinner at the Corinthian Yacht Club. Delayed by Omicron in January, it was another great reminder of the value of the organization, founded in 1896, that helps coordinate some of the activities of the approximately 110 Bay Area yacht clubs.

The Pacific Inter-Club Yacht Association was formed in San Francisco, California, May 12, 1896, with Charles G. Yale (San Francisco Yacht Club) as its first president. The five original charter clubs and the years they were founded were: California YC (1893), Corinthian YC (1886), Encinal YC (1890), Pacific YC (1873) and the San Francisco YC (1869). South Bay YC, founded in 1888, joined PICYA in 1897. Some clubs have come and gone, but 110 Bay Area clubs (about 105 current members) remain a potent collection of sailing and boating enthusiasts.

The 120-year-old tradition means this event was black-tie formal and the first such event since 2020. The new commodore, Joan Marsh of the California Carver Club, was sworn in for her second time; her first round as commodore was 25 years ago in 1997. The formal festivities have new directors, such as Jim Haussener, approaching from the back, being welcomed aboard by walking under PICYA burgees held by board members and staff commodores.

Since 1898, the PICYA has been publishing a directory of clubs, which, for many decades, has been the Yachting Yearbook, currently published by 2021 PICYA Commodore Patti Mangan.

Besides dressing up and having black-tie balls, what does this group do? The most well-recognized annual event they hold is Opening Day on the Bay, coming up this year on Sunday, April 24, with the theme “San Francisco Bay — Leading the Way.” Opening Day was loosely organized by the Corinthian Yacht Club in the 1890s and has since been more formally run by PICYA since 1917.

Sailboat racing was also one of the early reasons for the creation of the PICYA as they tried to create uniform rules and encourage yachting, something they still do today. The premier PICYA racing event is the Lipton Cup, first raced in 1913. The Cup has had its high and low points, and was actually “lost” for 40 years. It has recently been reinvigorated as a 10-club invitational raced in the StFYC J/22s. The 2022 event will be held the Summer Sailstice weekend of June 17-19. They have also hosted the Wheelchair Regatta since 1997.

It’s not all smooth sailing. The PICYA also works with the RBOC (Recreational Boaters of California) to help manage legislative issues that might have a positive or negative impact on boating. This is the kind of thing many of us prefer to ignore until it hits us on the back of the head. A recent notice from the RBOC says they’re working on issues related to boater fees and taxes, outdoor recreation and preservation of water, beach erosion and replenishment, abandoned and derelict commercial vessels, human and medical waste in waterways, boating and the Sacramento-San Joaquin Delta, and dredging. You might remember these initiatives the next time you’re waiting for high tide so the water’s deep enough to reach your slip.

The PICYA is one of the oldest organizations on the Bay to support participation in yachting, and it is a sometimes underappreciated, critical piece of infrastructure that works hard to pull the boating community together and tends to important issues ashore so we can all get out and sail.

The PICYA Commodore’s Ball felt a bit like a, dare we say it, post-COVID coming-out party, but also a great moment for PICYA to get together again and recognize some of the many individuals who help keep all the fun and frivolity on the Bay alive.

In this week’s episode of Good Jibes, tune in as host Moe Roddy chats with Mike Martin about finding what you love on the water and winning at the highest level. Mike is a Rolex Yachtsman of the Year who’s been a 5O5 Champion many times over, including North American and world championships, and has since transitioned into kite foil racing.

Hear how to find what type of sailing you truly enjoy, what’s special about the 5O5, whether winning championships ever gets old, the excitement around kite foiling, and his favorite places in the world to sail.

Then listen in on Apple Podcasts, Spotify, Google Podcasts, and your other favorite podcast spots — follow and leave a 5-star review if you’re feeling the Good Jibes!

Thanks for listening, and Subscribe here to have Latitude 38 delivered to your home each month.

Tonight the City of Berkeley will hold an online community workshop to discuss, among other things, the feasibility of a ferry line in the Berkeley Marina.

Tonight’s discussion will be part of the Berkeley Marina Specific Plan, a more than two-year planning project meant to create a path for “achieving a financially self-sustainable, publicly owned marina.” The ferry has been under consideration as a component in the marina’s financial future for nearly two years now.

It is impossible to simply dip one’s toes into a discussion of the ferry, or of the Berkeley Marina in general. The ferry has been controversial because it would change the nature of the marina from a recreational destination to a commuter hub. Exactly how much Berkeley Marina might change, and what benefits or impediments a ferry might supply, are the subject of fierce debate. (We first wrote about the pros and cons of a Berkeley ferry line in 2020.)

We’ll report back to you in the coming days and weeks about tonight’s meeting, any developments, and the various existential crises of creating a viable, publicly owned marina.

First foiling America’s Cup boats in 2013, then recreational foiling kiteboards, then foiling windsurfers, and now more, from Wingfoilers to foiling Waszps to foiling 50-ft catamarans — it seems that San Francisco has gone nuts for foiling.

No Strings on Wings

Moving up in size but still getting up on foils, a swarm of Waszps comes to San Francisco Bay this week. Richmond YC is hosting the Waszp Americas Championships, with racing starting tomorrow. The regatta has attracted not just North and South Americans — among the 33 entries are some from as far away as Europe and Australia. Thursday will feature slalom races, with championship races Friday-Sunday.

The SailGP Season 2 finale will come to San Francisco Bay the following week, but the Inspire Waszp Youth Championship will also compete in their own Grand Final. The winners from the Americas Championships will be among the competitors. The program is for young people under age 21. They’ll race on the same waters as the F50s. Following the regatta, on Sunday, March 27, the winners will receive a cash prize to help support their professional sailing development. The top male and female athletes will also get to join a SailGP team’s training and tech sessions at a Season 3 event, including a chance to sail on an F50.

In just 10 days, what has been called Sir Russell Coutts’ foiling road show will land in San Francisco for the Grand Final of Season 2. On Friday, March 25, the eight teams will be out on the Bay for on-the-water training and an official practice race. On the weekend, both days will see racing from 2 to 3:30 p.m. The Season 2 champion will be feted — and rewarded with $1 million — following the final match on Sunday.

If you can attend in person, check your options here. Can’t be here? You can still watch the action on TV and on social media.

But Will They Ever Come Back?

The answer to this question just dropped to our inbox this morning. It’s yes! SailGP Season 3 will conclude in San Francisco with the Grand Final on May 6-7, 2023, in what the press release called “one of the best stadium sail racing venues in the world.”

Mexico’s Sea of Cortez is in the boating spotlight again, this time with news that the 173-ft megayacht VIXIT has run aground on rocks approximately five miles southeast of Puerto Escondido, near the fishing village of Ligüí. Reports indicate the yacht is holed in three places and, if it is refloated, will require a tow to Mazatlán, which is the nearest location that could handle the necessary repairs. The grounding occurred on Monday afternoon during a transit from Loreto to La Paz with 15 passengers onboard, though it is unclear if that number is solely guests or guests and crew.

At this stage we understand that the pinnacle rocks, which lie approximately three feet below the surface, are known in the area and are shown on many charts as Piedras del Camaroncito (Little Shrimp Rocks).

The rocks lie within the Loreto Bay National Park, and as the weather was initially calm, around 50% of the diesel was able to be pumped out before rising winds halted the operation. There have been no reports of diesel leaking into the sea during or after the accident, but authorities are continuing to monitor the vessel.

We spoke with marine surveyor and yacht broker Captain Jim Elfers, former harbormaster at Puerto Los Cabos, who provided much of the news above and helped us translate the news from Spanish. He shared his concerns about boating in the Sea of Cortez. Elfers has navigated the waters many times as captain of vessels up to 110-ft, and urges mariners to be vigilant. “Unless wind waves are present a shallow reef in the Sea of Cortez will not show the telltale whitewater that most reefs do. It is possible to go from deep water to a few feet in just seconds with no visual cues. Check all available charts and use caution at all times.” (You can learn more about sailing in Mexico and doing the Baja Bash from Elfer’s book: Baja Bash II)

The steel-hulled VIXIT was built by Swedeship in 1988. She has a 10-ft draft, depending on tank loads, and has a cruising speed of 14 knots. Her exact location can be seen on Marine Traffic. 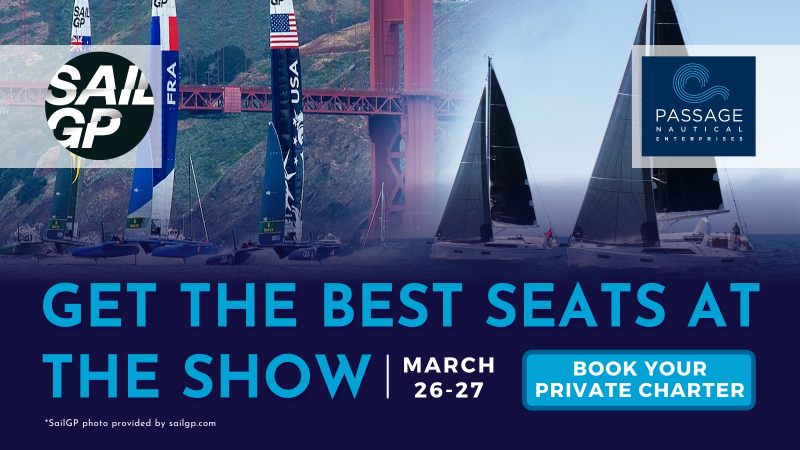 SailGP is just around the corner and we’re already getting booked for charters to watch the show from the water on San Francisco Bay. If catamarans or yacht racing are your thing, book your charter with us soon before we get all booked. Get the best seats on the bay for this event. Go here to book your private charter for this event: https://passagenautical.com/boat-rentals/