It’s just two weeks and two days to the start of the 27th annual Baja Ha-Ha. Which means the world-famous Cruisers versus Turtle Bay Kids baseball game at Baja Peninsula Stadium, the pride of Turtle Bay, is less than three weeks away.

The game is the way baseball should be played — pitches every 10 seconds, no strikeouts, women are always safe, and there are 25 to 35 people on the field, some of them making out or enjoying lunch. The rumor is that major league bigwigs will be in attendance, figuring out what rules should be adopted for the bigs.

At the conclusion of the game, almost all the equipment is donated to the local boys and girls, all of whom are mad about baseball. What makes this work is members of the Ha-Ha fleet bringing stuff to donate. It certainly doesn’t have to be new, and can include everything from bats to balls, to gloves and helmets.

Not only would the Poobah like every boat to contribute something, even an old batting glove, he would also like to get an idea of who is up for donating. Let him know.

A new waterfront condo complex on San Francisco’s Cityfront?  Chris Monti was out for an early morning cruise a couple of weeks ago aboard his Whitehall rowing skiff Blanco Pelicano. As Chris was passing by the Sausalito Yacht Club, he caught this image of the light and the fog resculpting the sea and cityscape.

No matter how many times you sail the Bay you can’t help marveling at the spectacular setting. This must happen to many of us.

How many times have you been on the water when a slant of light, tendril of fog, shower of spray or some other natural element has altered your eye’s perception and sculpted an image that is out of the ordinary? Particularly at this time or year as the fall light casts its graceful shadows across the Bay.

And while we’re on the subject of photos, remember to check out our monthly Sailagram feed for more photos of local sailors doing what they love — sailing! 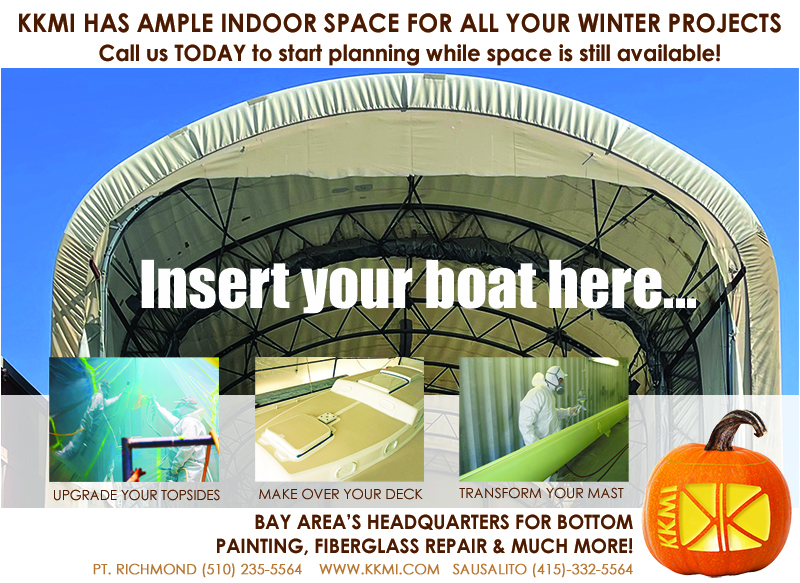 In October’s Latitude 38 Max Ebb shares his tips on spinnaker use and handling. And as always, Max’s lessons are not only informative, but also entertaining.

The sound of splintering wood got my attention — but there wasn’t enough wind for a hard docking on this calm and clear morning. Only a slight hint of a sea breeze, promising a cool afternoon that would keep the marina comfortable despite the high-temperature warnings posted for later in the day.

The splintering wood sound was followed by some high-pitched and high-volume human voices issuing sail handling instructions, dispensed with much urgency. I looked up from my varnish project and saw a small sport boat in a narrow marina fairway, under spinnaker only, no mainsail set, brought up onto a tight reach to avoid hitting the boats on the downwind side. The boat’s maneuvers were complicated by the fact that the spinnaker was only at about half hoist, and the boat was towing a large log. I deduced that the log was the top half of the piling that had just broken off.

“Cast off the damn piling!” an onlooker shouted, and just in time. With the drag released, the boat barely cleared the bowsprit of a trimaran on the end tie that overhung into the fairway exit.

By the time the boat and broken-off top of the rotten piling were securely tied up, I had finished the coat of varnish, so I walked down the dock to get the story. No surprise: It was Lee Helm with her all-female crew.

“Like, pilings aren’t supposed to break off that easily,” she complained. “It was a total fire drill.”

Everything would have been fine except that the piling, one of the originals from 60 years ago when the marina was built, had finally rotted all the way through and given up the ghost under the gentle tug of a small spinnaker in only 5 knots of wind. Eventually Lee got around to explaining what was going on.

Read the full story and learn about Max’s spinnaker tips at Latitude38.com.

Legendary sailors from near and far gathered this weekend for the National Sailing Hall of Fame induction ceremony, held for the first time at the old Newport Armory building currently under renovation. The Armory will become the Sailing Museum’s new home next summer.

The old armory, built in 1885, was the media building for multiple America’s Cups and served as the site for press conferences over the years, including several of Ted Turner’s notorious post-race affairs. In 1983, it was where Dennis Conner tearfully had to explain his loss of the Auld Mug to the Australians.

Saturday’s proceeding, emceed by Gary Jobson, was one of joy and celebration as the 11 new inductees joined the 90 current Hall of Fame members. The ceremony also honored members of the Class of 2020 who were recognized in a virtual ceremony last year.

Captain Pinkney was the keynote speaker. His speech was one of the highlights of the weekend. It was a mix of sardonic humor with some very poignant examples of the numerous hurdles he faced even before he began his legendary voyage. Many points of racial references left an impression on those who listened to his passionate words.

“I cannot express accurately the emotions today that I feel. It’s really overwhelming,” said Captain Pinkney. “The sea provides the most level playing field of any sport. It cares nothing about your age, your sex, your color, your religion, your nationality. And your ability, or lack thereof, will be extracted in a short period of time by a stiff breeze, a squall or a storm.”

Lynne Jewell Shore is a California legend from Los Angeles. New York Yacht Club named her Yachtswoman of the Year in 1980. Rolex honors followed in 1980 and 1988. She won Olympic gold in Seoul, South Korea, in 1988 with Allison Jolly in the 470 Class. This is just a short list of her numerous achievements and contributions.

“I am part of the Title IX generation, so it never occurred to me there would be separate events for each sex,” said Jewell Shore. “Some opportunities for women were limited, but I wanted to compete against the top athletes in the field. More often than not those athletes were men. It wasn’t easy. There were hours spent in the gym working on my physical strength. And I invested a lot of time building up my mental toughness. Resilience, determination and fearlessness all played a part in becoming a strong top athlete. There was no other way.

Carl Buchan was the College Sailor of the Year in 1977. He won a gold medal in 1984 at the Summer Olympics in Los Angeles in the Flying Dutchman class, and sailed on Stars & Stripes in 1988 when they defended the America’s Cup in 1988. He hails from Seattle, Washington. His father Bill was a legendary sailor as well, with multiple championships in the Star and Soling classes.

“Anything I’ve ever done sailing/racing-wise, I’ve always done it because I enjoyed it and it was fun,” said Buchan. “I’ve always wanted to win, but I enjoyed the preparation, and that includes working on the boat and getting that ready, sailing for the pure joy of it, the competition, seeing old friends, and meeting new ones.”

Dawn Riley, who has graced these pages of late, has checked off almost every yachting box possible. She was one of the women sailors aboard Maiden, sailed on the America3 all-women’s America’s Cup team, and was founder, skipper and CEO of America True, representing San Francisco YC in 2000 in Auckland, New Zealand. She is currently the executive director of the Oakcliff Sailing Academy.

“Having three women and Bill [Pinkney], who is kick-ass, in this group is amazing,” said Riley. “And I want to recognize that we need to continue to do this in all of our teams, whether it’s business or sailing. For some groups it’s 10 times harder to get in, so can we all just agree to ask three times more: How are you? Would you like to come sailing? Have you ever been sailing? … I see a future in our sport with equity, equality, diversity, and with leaders who naturally ask these questions.”

Sailors from across the US nominated the inductees. A selection committee comprising representatives from the NSHoF board, previous inductees, the sailing media, the sailing industry, community sailing, a maritime museum, the cruising community and US Sailing reviewed the nominations.

In a COVID-19 world, much of what happened this past weekend could not have been done without the tireless efforts of executive director Heather Ruhsam and her team.

“The 2021 Induction event weekend was incredibly special! It was a reunion for our inductees and a celebration of their newest peers,” said Ruhsam. “It was also a milestone for the organization. We gathered in the newly renovated Armory property, a location historically relevant to our sport. As we get closer to opening this national home for sailing, it was wonderful to see sailors from 10 of the country’s sailing regions in the room.”

“The men and women we recognize today do not live in a world of make-believe,” said Gus Carlson, president of the NShoF. “They do not hide and hope for someone to save them. They change things themselves. When it comes to measuring their lives, they do so by testing them … and there is no question they have passed those tests.”

The National Sailing Hall of Fame was founded in 2004 as a nonprofit educational organization dedicated to preserving the history of sailing and its impact on American culture; honoring those who have made outstanding contributions to the sport; demonstrating its value as a hands-on tool for scholastic and life skills learning; and inspiring and encouraging sailing development and participation.

“The Sailing Museum will be a wonderful addition to Newport and to the sailing world at large,” said Steve Tsuchiya, chairman of the America’s Cup Hall of Fame nominating committee. He is helping oversee that portion of the new museum’s display. “The interactive display monitor will feature images and biographies of the ACHoF and NSHoF inductees as well as 21 half hulls of important America’s Cup yachts, from America to Te Rehutai.”

The amazing evening was just the beginning of what will be an amazing museum for generations to come when it opens its doors next summer.