The 37th annual Fiji Regatta Week at Musket Cove has just drawn to a close in western Fiji, but not before a few boats and sailors from the Bay Area and West Coast seriously left their mark on the regatta. Attracting an impressive fleet of 65 boats with around 210 sailors, the famous South Pacific cruiser regatta’s numbers were down from recent years past, but arguably better than anticipated given the COVID-19 global pandemic.

Fiji has been completely COVID-contained for nearly six months, with no cases in the community since about April 20. As a result, it’s one of the few places on Earth that has managed to open its borders to international cruising yachts and been able to hold a truly international sailing regatta. No masks, no social distancing, no weirdness. Just sailing and fun in the sun. Remarkably, sailors were able to party like it was 2019. Or 1999, for that matter.

During the regatta’s first race — the Sand Bank Race — the breeze went very light and shifted to the southwest right at the start. With the fleet forced to sail upwind toward a narrow reef pass, every boat but one threw in a couple of tacks to clear the reef. Dr. Tom and Lynne Petty’s West Coast-based Wylie 60 Roxanne was the only boat that managed to lay the exit to the reef pass on one tack. As a result, they were launched. With a long, relatively narrow hull and generous sail plan, the custom Tom Wylie-designed 60-footer extended on the fleet to win by a huge margin on a course shortened by light air.

Two days later in the Marsden Cove Marina Around Malolo Classic race, Roxanne again showed off her impressive speed by keeping the fast, local racing multihull honest and dropping the rest of the monohulls in her seemingly undisturbed wake. The Fiji-based 8.5-meter class racing catamaran Miss Minnie took overall honors in the race. This writer was doing media for the regatta; the race’s media boat began overheating about three minutes before the starting gun. I hopped onto the big red catamaran Archer from San Francisco to race around the island with them and do drone camera work for the race.

With Baja Ha-Ha and Transpac vet Kurt Roll of San Diego also onboard, it was a friendly and enjoyable affair for sailors who all had Cali roots. Archer was the third multihull over the finish line, but first cruising multihull over the line — a solid result that left the crew in high spirits. “We got a bad start in light air and were just continually getting gassed by a Whitbread 80 maxi for the entire first leg,” Seth told us just after the race. “Once we got clear of them at Castaway Island, we set our secret weapon, the big red symmetrical spinnaker, and just ran down the course to the back of the island, passing several boats in the process. From there, we were able to hold off the two fast monohulls Pandora and Amici to the finish. All in all, an awesome day of sailing in paradise.”

The US Coast Guard Research and Development Center (RDC) has announced that it’s testing and evaluating the use of unmanned surface vehicles off the south shore of Oahu, HI. The purpose of the tests is to evaluate each vessel’s ability to provide “persistent maritime domain awareness, especially in remote areas of the oceans.” The USCG press release said that while the unmanned vessels could potentially assist with many Coast Guard missions, they are exploring their ability to help the Coast Guard “better protect critical natural living marine resources from Illegal, Unreported, and Unregulated (IUU) fishing and other illicit activities.”

The tests, scheduled to run from October 7 to November 5, focus on autonomous vessel systems from Saildrone and Spatial Integration Systems, in addition to a USCG-owned autonomous research vessel made by Metal Shark.

According to Seapower magazine the Coast Guard awarded two contracts for unmanned vessels in February, the first to Alameda-based company Saildrone. The Saildrone — a wind- and solar-powered autonomous surface vehicle with “patented wing technology” — was designed and manufactured as the result of “10 years of R&D in pursuit of the land speed record.”

The contracts total close to $1.8 million. Both vessels will be owned and operated by the contracted companies throughout the testing.

The third vessel in the test is the Sharktech 29 Defiant, supplied by Boston-based Sea Machines Robotics in partnership with shipbuilder Metal Shark Boats, of Jeanerette, Louisiana.

The Coast Guard said, “Following the completion of the evaluation, the RDC will publish a report with recommendations for potential future actions for the Coast Guard.”

Bob Gray and family enjoyed many a sailing mile on his Ranger 33 Coquelicot, but it finally came time to put her up for sale. Early this month he placed his ad on Latitude 38’s Classy Classifieds page, and — presto! Five days later she was sold. It’s always a bittersweet day. Your old ‘friend’ is taking off for new horizons, though happily with a new owner taking her there.

We had a quick search on our website to see what we might find of Coquelicot from the past and came up with the photo below, shot by our race editor Rob Moore in early July 2002. Looks like one of many great days on the Bay.

Bob included the photo below in his ad on October 7, and a few days later Bob was showing the boat.

He said, “The buyers went through it, started the engine, listened to it, saw the inventory and the storage lockers, deck and equipment, and then bought the boat. The ad was good. I had three inquiries. One guy came for an inspection before this, but he opted for a boat with self-tending jib. One more guy was calling again (he wanted pictures, which I sent just before I left to show the boat to the buyer), and one other.”

Bob concluded, “I am going to miss my boat.”

We understand. We’re partial to Ranger 33s because we’ve sailed ours on the Bay since about the time the first photo above was taken!

Bob and Betty Gray have been very active members of both Berkeley Yacht Club and Metropolitan Yacht Club. Currently, they are members of Berkeley YC and race committee volunteers for the Berkeley Midwinters. They go back to the old days of MYCO (Metropolitan Yacht Club of Oakland, which is now Metropolitan YC, a paper club headquartered in Novato) and that club’s midwinters. (Read more about that in our feature in the February 2016 issue.) The Grays have also been past volunteers for the Pacific Cup. Betty Gray was commodore of BYC in 2007 and Bob in 2014. Betty was commodore of MYCO in 1994.

If the time is right for selling your boat, consider the Latitude 38 Classifieds or any of the great brokers advertising in our pages. It’s sad when people sell their boats, but we do like seeing happy, new, enthusiastic owners on the Bay.

A couple of weeks ago we shared a story from the Grand Poobah reminiscing about some of the friends he made while sailing Mexico. Well, here he is again with another story about some of the fun and interesting people one can meet sailing south of the border (well, just about anywhere for that matter).

The Baja Ha-Ha celebrates cruising everywhere in Mexico — as well as Ha-Ha veterans who have cruised Mexico and far beyond. This includes Eric and Pam Sellix of the Clatskanie, Oregon-based Seawind 1160 cat Pied-a-Mer III. The hard-working couple started cruising in 2012 after they were unable to find buyers for their two rural Oregon restaurants.

As we recall, Pam, then 66, had never spent a night on a boat or been out of sight of land before. The couple joined the 2012 and 2014 Ha-Ha’s. And we later saw them at Marina Riviera Nayarit in La Cruz.

We knew they’d gone on to the South Pacific, but we’d pretty much lost track of them — until today. Pam just wrote to say that they are now “76 years young and still going strong.” And in the Red Sea! How cool! We’re so impressed.

The days are getting shorter, but that isn’t stopping Richmond Yacht Club from running their Wednesday night beer can series for an extra month. The early start time (with the sequence beginning at 5 p.m.) did equal fewer boats at the line, but many still got out to have a good time in this casual race.

The masks read, “Usually our FUN is viral,” and you get that vibe from everyone in the club, even during a pandemic.

Though the pandemic has changed the regulations of racing, and post-race celebrations, it has also encouraged more people to buy boats and get out on the water. Cindy Evans, who is new to the club, bought her Express 34 Joy Ride in February, just before the lockdowns were put into place.

She has sailed a lot in the last seven months and credits the purchase of Joy Ride for making 2020 a pretty good year. Cindy bought Joy Ride from longtime RYC members Bruce and Diana Powell, after crewing on the boat a number of times.

This past Wednesday night, Joy Ride raced alongside Second Wind, the Sabre 426 that Velina and Peter Barnes brought down from Seattle this summer. You may have read about the homecoming of Second Wind in the September Issue of Latitude 38. Cindy sailed a lot with the Barneses prior to buying her own boat. Just another reminder of how small, connected, and supportive the sailing community is.

Richmond YC’s Wednesday night beer can series will run through the end of October. Other upcoming races hosted by RYC include the Fall Mercury Regatta on October 17, Great Pumpkin Regatta on October 24, and the female-skippered Amazing Grace Cheney on November 1. 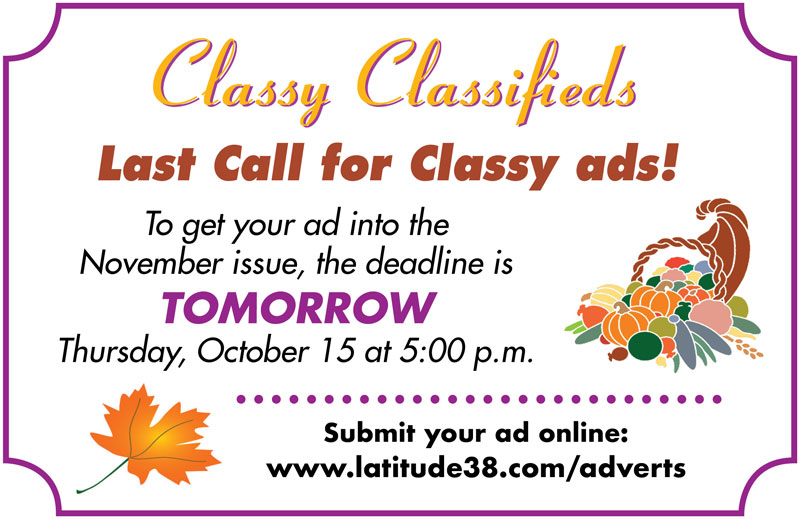 To get your ad into the November issue of Latitude 38, please remember that the deadline is tomorrow, Thursday, October 15, at 5 p.m.

SHARE ON Tweet Share Email Linkedln
Leave a comment
Receive emails when 'Lectronic Latitude is updated. SUBSCRIBE
'Lectronic Latitude: Monday, Oct 12
Cityfront Regatta
Super-Tight Singlehanded Racing for Folkboats
Folkboats have been racing on the Bay since 1958. This weekend, they revived a singlehanded regatta the class has not held for a decade.
Single Handing South
From Delta Cruiser to Channel Islands Solo Sailor
After cruising in this year's Delta Doo Dah aboard her Cal 2-27 Dura Mater, Jackie embarked upon a solo sail from Richmond Yacht Club to the Channel Islands.
Sponsored Post
Keenan Fuel Filters
Keenan Filter’s newest compact fuel management system offers everything needed to ensure clean fuel delivery to the motor, no matter the source.
Discarding Old Signal Devices
Alameda County – Safely Dispose of Your Old Marine Flares this Weekend
Alameda County is running a one-day flare collection event this coming Sunday, October 18 from 9 a.m. to 1 p.m..
What the Weather Brings
Pictures of a Bay Area Summer from my Balcony
It was so windy that it redefined my concept of what windy was. There were days that normally docile windsurfing spots in the East Bay were blown white with foam and heaving with huge, breaking wind swell.
More 'Lectronics »
Report Listing