In the coming weeks, the sight of cargo ships lined up outside the Port of Oakland will become visible only in our memories. In an effort to “reduce congestion, to promote maritime safety and minimize air quality impacts,” the Pacific Maritime Association, the Pacific Merchant Shipping Association and the Marine Exchange have joined forces to create a “new off-shore queuing process.”

According to SFGATE, under the new rules, launched this week, instead of anchoring in the Bay while they wait for their turn at the dock, the 200,000-ton vessels will receive an assignment time and will remain in a newly designated zone, the “Safety and Air Quality Area,” which lies 50 miles off the coast.

The Pacific Merchant Shipping Association (PMSA) told SFGATE that the new system will “reduce emissions from vessels located near the Bay Area, and allows more space between vessels.” They expect that it will also allow the ships to “slow steam across the Pacific,” and thereby reduce their overall emissions.

The new system is already in use in Southern California at the ports of Los Angeles and Long Beach, and according to PMA President and CEO Jim McKenna, the system is a “resounding success.”

You can read the full story here.

In a recent episode of Latitude’s Good Jibes podcast, we chatted with sailor Jessie Zevalkink — photographer, storyteller, mom and wife who is currently based in San Carlos, Mexico, aboard Alekona. After sailing from Newfoundland to England in 2017, Jessie and her husband Luke were searching for a vessel that would be better suited to the higher latitudes (think ice and snow). In 2020 they discovered Alekona, a 1983 steel-hulled Endurance 44.

Alekona‘s former owner, Terry Causey, had sailed her extensively throughout Hawaii and the South Pacific before donating her to Call of the Sea in Sausalito, in 2019. Latitude contributing editor John Riise was among the crew who would deliver Alekona to the Bay Area, where she was to be sold, with the proceeds going toward Call of the Sea‘s mission to provide experiential education for Bay Area youth.

Jessie and Luke bought Alekona the following January. But she needed work. And we all know what happened in 2020 … Regardless, the determined couple weathered the storms of the pandemic, and the excitement of bringing their first child into the world, and completed the work on Alekona, whereupon they heeded the suggestions of Bay Area sailors and turned left out the Gate, not right.

Head over to Good Jibes #20 to learn more about Jessie, Luke and their son Otis’s sailing adventures in Mexico. 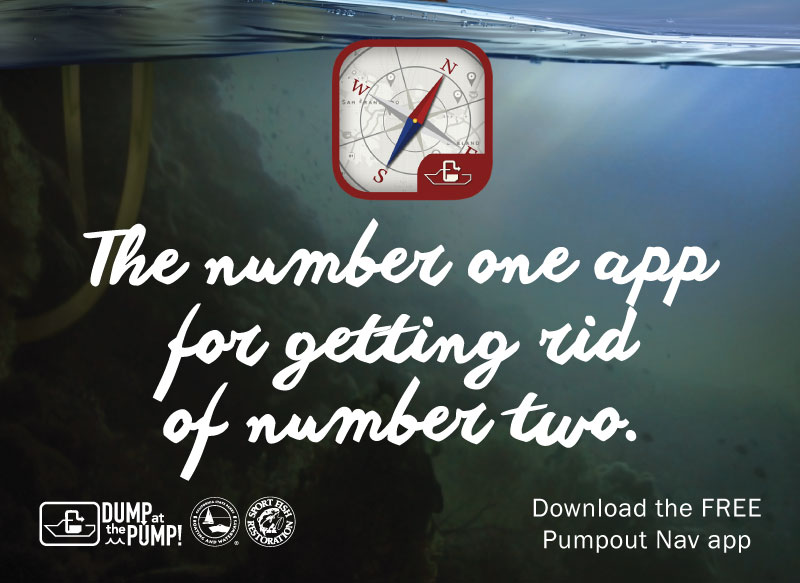 The California Division of Boating and Waterway’s Pumpout Nav is a free iOS and Android mobile app that shows you where the nearest sewage pumpout, dump station and floating restrooms are located.

We love seeing the variety of boats that turn up in our Classy Classifieds. And as you may have read in last week’s ‘Lectronic, when we wrote about the Albin Vega, sometimes the boats bring back memories or remind us of stories about other sailors.

One of our recent listings is a 1972 27-ft Ericson. This little boat sounds as if she has a good history and is good value for money — recently surveyed, new autopilot, new halyards in 2021. And a stack of more features.

The ad also reminded us of a story from our archives, in which Rick Daniels was setting up to sail his Ericson 41, Lazy Daze, from San Diego to Hawaii. Rick and his crew experienced almost every type of wind and wave during their 23- (or 24-) day crossing. At one point they ‘squall surfed’ for a day. “We’d be sailing in 5 to 10 knots of wind, see a squall, and track it down. Once in the squall, we’d have 20 knots of wind, so we’d run along the face of it. Once we’d sailed out of it, we’d look for another.”

Rick began his story saying that he would normally sail singlehanded. But when considering the distance he was about to cover, he decided to find a couple of crew to help handle Lazy Daze during the weeks-long crossing. And where did Rick find his crew? In Latitude 38‘s Crew List! True story.

And in case you missed it, our Crew List was relaunched last September, ahead of the fall Crew List party at the Bay Model. The list already has almost 450 people signed up. Eighty-nine of those are boat owners, just like Rick, who are looking for crew to join them racing, cruising, or just plain sailing. The balance are crew looking for boat owners. At the recent YRA awards ceremony, a racer asked if we could add the date of entry to the Crew List display, which we’ve done, so you can now sort and see participants in the order in which they have been received. If you update your listing as crew or skipper your entry migrates back to the top. You can do this easily, here.

Sailing in fresh air has been a great pandemic escape that has reactivated many once-idle boats. They all need crew and some need new owners. The goal of our Crew List and Classifieds is to help keep more boats and people sailing.

And while we’re talking about new boats, another indication of the Ericsons’ pedigree is that one of our own crew sails an Ericson. Latitude‘s sales and marketing guru Nicki Bennett has a 1972 32-ft Ericson named Sospiro. Nicki has sailed Sospiro all over San Francisco Bay and the Delta, and lives aboard for much of the year. So be like Nicki, and get yourself an Ericson (or other sailboat) and go sailing!

Want to buy or sell a boat? Check out the Classy Classifieds. And remember, the deadline for print ads in the February issue is January 15 — that’s tomorrow!

A while ago, a reader asked the Old Farmer’s Almanac about red skies: “Does the weather proverb ‘Red sky at morning, sailor take warning / Red sky at night, sailor’s delight’ have any basis in weather fact?”

The experts at the Almanac replied, “The basic idea here is a sound one for most of the United States, where the weather patterns move from west to east. A red color in the sky is the result of sunlight reflecting off clouds. If the sky is red in the morning, the eastern horizon must be clear, and the clouds foretelling a coming storm are in the west, indicating the potential for bad weather. By contrast, a red sky at night can be produced only if the western horizon is clear and the clouds overhead are moving east, or clearing out. So the proverb seems to have some validity.”

This week, Northern California has been basking under a high-pressure system and the resulting inversion layer. The haze in the sky combined with patchy clouds has produced spectacularly vivid sunsets. Sunrises, by contrast, have failed to stream rosy light through our windows. What do these meteorological phenomena portend for weekend sailing?

We’re just dumb writers, not meteorologists or scientists of any kind. But looking at the forecast, we think that tomorrow’s breeze on San Francisco Bay will be from the northeast — an odd direction but not surprising in winter. For racers in this weekend’s Corinthian Midwinters, the National Weather Service calls for “E wind 7 to 12 kt becoming variable and less than 5 kt. Partly sunny,” on Saturday, and “N wind 7 to 9 kt. Mostly sunny,” on Sunday.

We’ll be interested to see if tonight’s sunset is as red as last night’s, given this Small Craft Advisory from the National Weather Service, as of 8:43 this morning: “A small craft advisory remains in effect from 9 p.m. this evening to 9 a.m. PST Saturday,” for San Pablo Bay, Suisun Bay, the West Delta and the San Francisco Bay north of the Bay Bridge. “Conditions will be hazardous to small craft. Inexperienced mariners, especially those operating smaller vessels, should avoid navigating in hazardous conditions.” During the summer, experienced San Francisco Bay sailors are accustomed to sailing in Small Craft Advisory conditions.

Meanwhile, huge storm systems elsewhere in the Pacific are swirling west of British Columbia and north of Hawaii.

Again, we’re not weather scientists, so don’t take our word for it. Check your own sources (or find some here) and plan your weekend on the water accordingly. 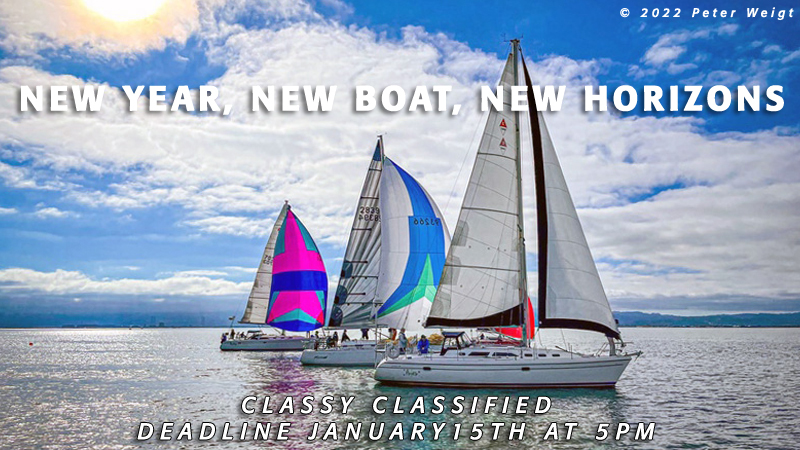 Place your classified ad by 5 p.m. tomorrow to be included in the February issue of Latitude 38!

SHARE ON Tweet Share Email Linkedln
Leave a comment
Receive emails when 'Lectronic Latitude is updated. SUBSCRIBE
'Lectronic Latitude: Wednesday, Jan 12
Bay Area Sailmaker Looses Everything
West Coast Sailing Pioneer Donald Goring Homeless After Boat Fire
At around 10 a.m., on Monday, Donald Goring was taking a walk when his home of 30 years was destroyed by fire.
It's a Sailors' Life
Good Jibes #22 with Moe Roddy and Ashley Perrin
Moe Roddy is joined by Ashley Perrin to chat about her lessons from racing around the world and sailing the coldest parts of the world. Ashley is a professional racer who has sailed over 130,000 ocean miles and spent 25 years in offshore command.
Sponsored Post
Club Nautique Is Hiring Sales and Office Staff
Club Nautique is seeking a full-time sales person in Alameda and a part-time front desk associate in Sausalito.
Arthur B. Hanson Rescue Medal
US Sailing Honors California Sailors for Rescues
The US Sailing Safety at Sea Committee awarded the prestigious Arthur B. Hanson Rescue Medal to two California crews who performed man-overboard rescues.
Where's the Wind
RORC Transatlantic Navigators’ Nightmare: The Big Blue Hole
How would you find your way across the Atlantic in these scramble tradewinds?
More 'Lectronics »
Report Listing