It’s been difficult these past few weeks to remain upbeat. Between the unprecedented fires, unprecedented winds and unprecedented power outages, October in California seems more like a preview of the End of Days than the month of plenty.

Oddly, in the midst of all the fire and darkness, we experienced a personal beam of light. It involved sailing — specifically, delivering a boat from Southern California to the Bay at mid-month.

Now, deliveries aren’t usually very newsworthy. They happen all the time all over the world. Some are very pleasant. The northbound ones up the California coast usually aren’t. With the wind and waves typically against you all the way, about the best you can usually hope for is to bundle up, put the pedal to the metal and get it over with. Ducking into various harbors along the way to wait out weather or just rest is the norm.

The boat was Terry Causey’s 48-ft ketch Alekona, a Peter Ibold ‘Endurance’ design built of steel in New Zealand in the early ‘80s. It was lying in Channel Islands Marina in Oxnard, and the owner needed it delivered to the Bay. The delivery crew consisted of skipper/friend Rob Tryon, old sailing buddy Jamie Meves, and your humble scribe.

Foreboding was in the air even as we drove south to catch up with the boat. The Santa Anas were playing footsie with the car on sections of the Grapevine, and as we came down the southern side, a dirty gray smudge revealed one of a dozen fires going in the state at that time. Traffic signs warned of a detour at Santa Clarita, which we luckily avoided.

After arrival, we made a quick provision run and cast off a bit after 10 p.m. in calm conditions. Outside the breakwater, we made the turn north, started our three-on, six-off watch routine and pondered what trials lay ahead.

As it turns out, no trials lay ahead. Under a full moon, with flat water and never more than 12ish knots of breeze (just enough to give us an occasional boost with a reefed main and mizzen up), we veritably flew north. Bigger breeze and seas were forecast farther offshore, and there’s a countercurrent that seems to run inside the five-mile mark. Rob’s strategy was to stay inside that. So we averaged three to five miles out. “It’s the same strategy the old lumber schooners used,” Rob reminded us. “Richard Henry Dana describes it clearly in Two Years Before the Mast.”

We discussed the usual contingency plans —ducking into Santa Barbara or maybe Cojo to wait out a decent window to round Point Conception. But when I awoke from my off-watch the next day and asked if we were there yet, Jamie cocked a finger aft and said, “It’s back there.” By that time, so was Point Arguello. The seas were dead-flat and dolphins were jumping at the bow.

And that’s how it went. We were aware that Santa Anas, which had been blowing for two days before we left, can ‘erase’ the usual NW wind and waves for awhile, but as far as we knew, they had pretty much petered out the day we took off. It was like waiting for the other shoe that never dropped. Except for a few brief teases, the westerlies never filled in. It seemed too good to be true. Rob felt we were at least going have to tuck into Half Moon Bay for the night rather than fight a big ebb at the Golden Gate, but even that didn’t happen. We were making such good time that we soldiered on, eventually jumping onto a nice flood near the Lightship and sluicing under the Golden Gate Bridge at almost nine knots SOG – 49 hours and change out of Oxnard.

The forecast for the next day was 30 knots.

It was certainly the most pleasant delivery north we’ve ever done. And one of the most pleasant boat trips in a long time, period. Although we didn’t do much actual sailing, it was great to catch up with old friends, cruise a well-found boat under a full moon every night, and once again experience the nice feeling of a mission accomplished. There was even a cherry on top. It appeared in a photo of the sunset taken on that last day. We couldn’t see it with the naked eye, but when we downloaded the pics, there it was: a tiny, but unmistakable, green flash. 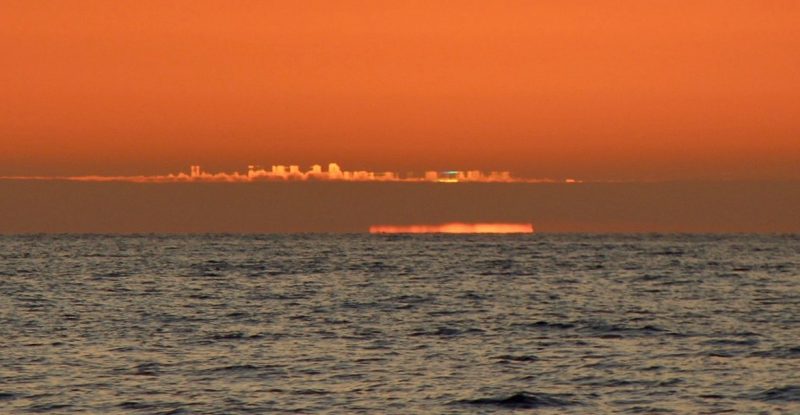 Now back to the apocalypse.

Receive emails when 'Lectronic Latitude is updated. SUBSCRIBE
'Lectronic Latitude: Wednesday, Nov 6
The Baja Ha-Ha fleet heads South
The Scary Part of the Baja Ha-Ha Is Ashore
When is Monday the best day of the week? When you’re starting the Baja Ha-Ha.
Sponsored Post
Brickyard Cove Marina
Rates, rental forms and details on what Brickyard Cove has to offer.
Short Days and Cold Water
Some Timely Advice
Over the weekend, we said goodbye to post-workday sunlight when we set our clocks back one hour. Autumn is exactly half over.
Latitude 38’s Classy Classifieds
Check out the Great Boats in This Month’s Latitude 38 Classy Classifieds
Latitude 38's Classy Classifieds are the place to shop for sailboats — as well as marine gear, trailers, liferafts, boat partnerships, trades and more.
More 'Lectronics »
Report Listing