At around 10 a.m. on Monday, Donald Goring was taking a walk when his home of 30 years was destroyed by fire. The 93-year-old, who had lived aboard at the Fifth Avenue Marina since 2010, has now lost pretty much everything except the clothes he was wearing. Donald was an avid Bay Area sailor and racer, and founder of the Midget Ocean Racing Association (MORA). He was also a sailmaker, and opened his own loft at 730 Polk Street in San Francisco in the late ’60s.

According to a report in the East Bay Times, the Oakland Fire Department was called to the blaze at 10 a.m.. Crews from three engines and one truck took around 30 minutes to put out the fire. In that time, Donald’s boat was completely gutted.

Fifth Avenue Marina’s harbormaster, Bud Brown, was concerned for Donald’s safety, and went aboard the boat during the fire to look for him.

“I didn’t know whether he was on the boat or not, so I was trying to go and see if he was there. It was too smoky and unbelievably hot. It burnt all the hair off my arms. I figured if he was down there he was a goner. I pumped four fire extinguishers into it and a lot of water from the hose, and didn’t even slow it down. I felt the propane tank and it was really hot, and [I] thought it was going to explode and got everyone away from the boat. As you saw, it blew shortly afterward. They didn’t get the big explosion on film though. It was big. What was on film was just the venting. An interesting day for sure.“

Donald and his caregiver, John Fredricks, are currently staying in a hotel in Alameda while waiting for Donald’s passport to arrive. On Friday John will accompany Donald to Florida, where Donald’s son lives.

Donald’s friends have organized a BBQ going-away party for him at Fifth Ave. on Thursday at 2 p.m. John is asking everyone to write a poem for Donald, or to read him one of their choosing.

John has also created a GoFundMe page with the hope of collecting enough funds to help Donald settle into his new life in Florida. An update on the page says that Donald is finally beginning to realize what happened and that he’ll no longer be able to live on his boat.

We wish all the best to this West Coast sailing pioneer. He will no doubt be missed.

Jeff Berman captured the following video of the fire from across the water.

Welcome to Good Jibes, Episode 22! This week’s host, Moe Roddy, is joined by Ashley Perrin to chat about her lessons from racing around the world and sailing the coldest parts of the world. Ashley is a professional racer who has sailed over 130,000 ocean miles and spent 25 years in offshore command. She owns Racing Yacht Management and also serves as an ice pilot and Antarctic expedition officer. Hear how to navigate icebergs, stay safe in risky sailing environments, sail across oceans, about doublehanding vs. singlehanding, and stories from diving in Antarctica. This episode covers everything from freezing-cold waters to sailing by yourself. 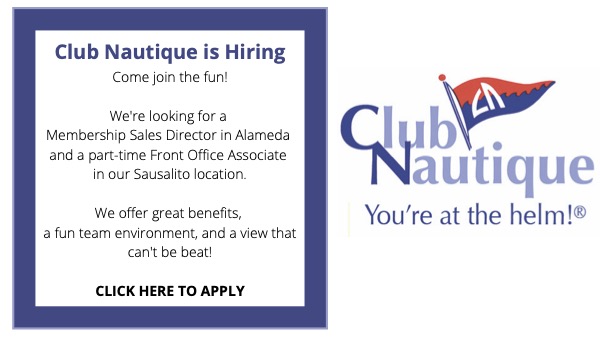 We are seeking a full-time sales person in Alameda and a part-time front desk associate in Sausalito.

The US Sailing Safety at Sea Committee awarded the prestigious Arthur B. Hanson Rescue Medal to two California crews who performed man-overboard rescues during races in 2020 and 2021.

The committee awards the Arthur B. Hanson Rescue Medal to skippers and/or crews of pleasure boats or race support vessels who rescue victims from the water. The award recognizes the significant accomplishment in seamanship that has saved a life. The committee also uses it to collect case studies in rescues for analysis, which will eventually be incorporated into US Sailing’s extensive educational programs.

Len Bose, Peter Heck, Steve Natvig, Chris Vilicich, James Malm, Kenneth Sherb and Taylor Schlub received the medal for their quick response in saving John Shulze, the owner of Horizon, the Santa Cruz 50 on which they were racing. Shulze fell overboard on the evening of May 31, 2021, during the Coastal Cup race from Monterey to Santa Barbara.

Horizon and a competitor converged on Point Conception. Horizon made the call to jibe back into the breeze to maintain an advantage. The spinnaker clew made it past the headstay but the main had not completed the jibe when a 25-knot puff hit the boat. The mainsail suddenly jibed at the same time the chute filled. Horizon rounded up into the wind violently, throwing John overboard.

The crew quickly got Horizon under control and deployed a Lifesling to facilitate the rescue. After several attempts to maneuver the boat close enough to John, the crew were finally successful in retrieving him after Steve Natvig donned an inherently buoyant lifejacket and swam out to rescue John.

Read the full details of the incident.

Crew of Sea Maiden Recognized in Race Your Own Household Rescue

Dore, a competitor in the race, was singlehandling his Hunter 28.5 Decoy. He fell overboard when a shackle pin on a lifeline came out while he was putting up the whisker pole.

The skipper of Sea Maiden, Carolyn Sherman, with crew Sandra Sherman and Brian Fritzges, were sailing abeam approximately three to four boatlengths away. Because Mike was sailing alone, not only was he in the water, but his boat was sailing unattended toward Harbor Island. Brian Fritzges dove into the bay to assist Mike. Carolyn and Sandra continued sailing toward Mike’s boat to get it under control.

Sea Maiden was able to overtake Decoy. Sandra jumped onto Mike Dore’s boat and took control of the unmanned vessel. Meanwhile, another competitor, Roy Mumma, sailed past on Bolero and retrieved Mike Dore and Brian Fritzges from the water.

Know of a sailor or boater who facilitated the rescue of another on the water? Nominate them for the Arthur B. Hanson Rescue Medal here.

The big blue blobs move around like the oils in a lava lamp, and your goal is to slide by on the fastest side of the blobs. At least that’s how it looks to us as we watch the tracker for the RORC Transatlantic Race, currently underway from Lanzarote in the Canary Islands across to Grenada. Traditionally, racers head south to the easterly trade winds and zip across while searching for the best breeze angles crossing the Atlantic. This year the trade winds look weak, and the windless blue blobs have made it very difficult for navigators to find their way to breeze. We grabbed some screenshots from the past few days to give you a feel for it.

The navigators and software aboard all these boats are the world’s best. We have no idea what we’d do. But we always find it interesting to imagine how we’d try to solve that puzzle for what, to our inexperienced eyes, looks like a very complicated search for the right track across the Atlantic.

As you can see from the cover of our January issue, midwinters on San Francisco Bay can be very similar.

SHARE ON Tweet Share Email Linkedln
Leave a comment
Receive emails when 'Lectronic Latitude is updated. SUBSCRIBE
'Lectronic Latitude: Monday, Jan 10
Bright Sun, Puffy Clouds, Light Air
Racing Around the South Bay on a Sunny Weekend
The weekend was a busy — and rather beautiful — one for midwinter yacht racing. But beauty didn't always translate to great racing conditions.
World Famous L38
Welcome to Our First Caption Contest(!) for 2022
We're diving into 2022 with this photo for our first Caption Contest(!) of the year. Give it your best shot!
Sponsored Post
San Francisco on the Bay: Dock, Dine, Stay, Play
Discover San Francisco Bay and all that inspires those of us who live or visit here.
SHOVELING YOUR SAILBOAT
Digging It at Hood River Marina on the Columbia River Gorge
Right now, there's quite a difference in sailing conditions between San Francisco Bay and the Columbia River Gorge.
Pros and Cons of Sail Choices
Hanks or a Headfoil? What’s Right for an Express 27?
Greg Felton asks, "Should I put hanks or a new foil for the luff of my jib on my Express 27?"
More 'Lectronics »
Report Listing