As the weather warms up and the Northern Hemisphere slides into spring, we bring you Latitude 38 magazine’s March issue. This month we have a host of great stories along with our regular columns. Here’s a preview:

The Outside Route — A Better Way to Bash

Here’s the Outside Route in a nutshell: When you leave Cabo, sail west. (Note that we’re not targeting west here — it’s simply the result of sailing close-hauled on starboard tack.) After a day or two, you will be far enough offshore to play whichever tack is favored. But at first, starboard is your only option.

Another benefit of this tactic is that once a couple of hundred miles out, I have often found myself lifted as the northwest wind becomes more north — and even sometimes northeast — and I wind up sailing parallel to the beach after all. To give you an idea of how lifted you can get, there is an outcropping of rocks called the Alijos, about 190 miles west of Mag Bay, that reach up through 2,000 fathoms of water to the surface. I have often passed near them on my first starboard tack out of Cabo.

The Story of Three Tris

The date was February 2008. David Vann arrived with three aluminum hulls that he’d constructed in Florida with a plan to build a 50-ft aluminum trimaran on a shoestring budget. Esquire magazine had the right to his story, which would be told as he circumnavigated the world. The boat had no engine, and the main hull where he would be living was only three feet wide. We towed him out of the Napa River, and he made it to Monterey before having structural problems. He brought the boat back to us, where it was stored for the next 11 years. His budget exceeded $50,000, and Esquire never got the story.

I remember the first time I laid my eyes on a Columbia 5.5. A friend had called me over to see his new toy at Alameda Marina. Unfortunately for my friend and his Ericson yacht, there was a beautiful, Corvette-red sloop resting in the slip opposite, her bow rising from the water with the elegant arc of a calligraphic stroke. From the fresh gloss of her flush deck and teardrop-shaped hull, I could see that she was adored. “What a beautiful … Folkboat!” I exclaimed, enthralled, admiring and not entirely sure what I was looking at. While my mistake didn’t come to light until much later, what was obvious then was my friend’s irritation as I hovered, cooed and pointed. Yes, the debut of his burly daysailer had been completely upstaged, and by nothing less than a skinny, 32.5-ft Nordic supermodel of a boat.

Where will you pick up your copy? We know West Marine in Point Richmond has a stack; our driver Mike delivered them this morning!

Two young brothers from Scotland have just broken their own world record for sailing a toy ship around the world. Eleven-year-old Ollie Ferguson and his brother Harry, 8, sent their first ship, Adventure, off to sea from Peterhead, Scotland, in May 2017. The boys had been wanting to send a message in a bottle, and their parents suggested adapting their own toy pirate ship and sending it instead.

Adventure carried a message asking anyone who found the ship to record her location and send her back to sea to continue her travels. The ship traveled to Denmark, Sweden and Norway. Following a media frenzy around the world, the Fergusons were approached by the Christian Radich, a Norwegian full-rigged ship, which offered to carry Adventure out of the North Sea and into new cruising grounds. The Playmobil pirate ship was then carried 3,000 miles to the southern Atlantic Ocean.

On the way, Christian Radich‘s crew made running repairs and replaced the sails and rigging that had been damaged in the North Sea crossing. They also fitted the tiny ship with a tracker that sent its coordinates once a day. Adventure was approximately 20 miles from the coast of Barbados when communications were lost. However, the little boat had by now covered 3,773.26 miles, making it the Guinness World Record’s ‘most travelled toy ship’.

While waiting for Adventure to reappear, the boys and their parents were contacted by the Lewis family in Trinidad, who wanted to help. The Fergusons sent a new Playmobil ship, of the same model as the original, to the three Lewis boys, who quickly built the vessel exactly like the original and named her Adventure2.

In September 2020, Adventure2 was launched from the offshore vessel Normand Installer north of Georgetown, Guyana, and approximately 50 nm from the original Adventure‘s course. Currently the toy sailboat is approximately 160 miles from Miami and has sailed 3783 miles — she’s officially sailed farther than her predecessor, Adventure.

Don’t leave shore without it.

With the flip of the calendar to the month of March, so begins spring. What?! No, spring starts on the vernal equinox. Yes, that’s true. That’s called ‘astronomical spring’. But ‘meteorological spring’ starts today, on March 1. According to the Weather Channel — which had the foresight to grab the URL ‘weather.com’: “The arrival of spring you’ve probably heard about before is known as the vernal equinox,” wrote senior meteorologist Jonathan Erdman on the blog, Weather Explainers. “That’s the moment in time when the sun’s most direct rays are shining on the equator.” In 2021, the vernal equinox will occur on Saturday, March 20, at 2:37 a.m. PDT. (That day will mark just three months until Summer Sailstice on Saturday, June 19.)

“Why do meteorologists stray from those seemingly concrete definitions?” Erdman — whose profile picture features the Bay Bridge in the background — goes on to explain: “It all has to do with temperatures. When you examine average daily high and low temperatures through the year, you’ll quickly notice a pattern. The coldest three months of the year in the Northern Hemisphere are usually from the beginning of December through the end of February, while the warmest three months are typically from the beginning of June through the end of August.” These three-month stretches are known as meteorological winter and summer. “Meteorological spring — March 1 through May 31 — is the transition between the three coldest and three warmest months of the year.”

In California, the advent of the spring sailing season begins ahead of the equinox as well. Spring regattas dot the racing schedule in March. (See our March racing preview posted on Friday.) With the advent of Daylight Saving Time on March 14, the beer can season can start. Longer days can facilitate after-work sailing. Those who don’t wish to stay out past nightfall can now venture farther from their slips.

Even those locales that don’t set the clocks forward an hour will gain between 15 minutes and 45 minutes (depending on latitude) of daylight in the evening during March.

The advent of meteorological spring presents different weather challenges on San Francisco Bay. Typical winter sailing is usually quite mild (barring a storm), with currents often overpowering the light winds. March, by contrast, can be lusty and gusty, a capricious foretaste of the famous San Francisco summer winds.

Did you get out sailing in February? This month’s Sailagram feed is full of photos submitted by our readers, the real sailors who make our community so amazing. 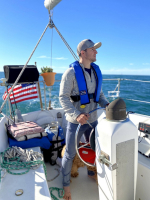 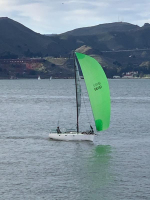 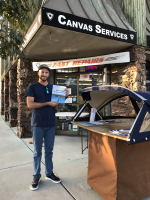 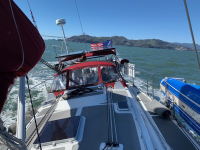 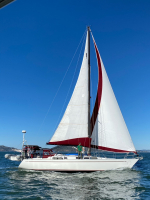 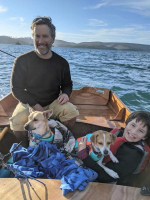 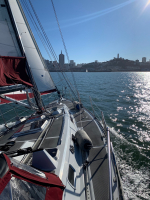 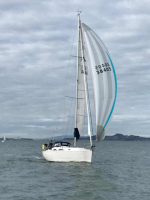 1 2 ... 5 ►
Want to be included next month? Send you photos our way: [email protected].
SHARE ON Tweet Share Email Linkedln
Leave a comment
Receive emails when 'Lectronic Latitude is updated. SUBSCRIBE
'Lectronic Latitude: Friday, Feb 26
It's Been a Rough Month for Yachts and Docks
S/Y ‘Black Pearl’ and M/Y ‘Go’ Have Run-ins with Docks
The Black Pearl is a 350-ft three-masted sailing yacht. She has a 49-ft beam and a gross tonnage of around 2,864 tons. But none of this helped her when the vessel's crew recorded true wind speeds of over 63 knots at her dock in Porto Montenegro.
'Tis a small world we sail in!
Sailors Attract Sailors — Sometimes in Unexpected Places
While walking in Arizona, Pat McIntosh spotted a sailing dingy tied to a car roof. “Who's got the car with the sailboat on top out here?” All the RV’ers looked at me as if they had never heard of a sailboat before.
Sponsored Post
Twin Rivers Marine Insurance Opens New Location
Gary Clausen of Twin Rivers Marine Insurance has been serving the needs of his clients in all of California for many years.
Making Boats Available to Members
Long Beach Yacht Club’s Growing Soling Fleet
We know many clubs have tried club-owned boats available for member usage, but it remains a challenging program to manage. Long Beach Yacht Club has successfully created a club-owned fleet of Solings for member use.
In Like a Lamb and Out Like a Lion?
Yacht Racing Ramps Up in March
We predict that March will come in like a lamb and go out like a lion. And we're not talking about the weather.
More 'Lectronics »
Report Listing