Monday was a “Chamber of Commerce” day on San Diego Bay. Skies were clear and the air was warm as the Baja Ha-Ha fleet took off in a gentle morning breeze. Gentle was at the severe end of the wind spectrum for the first 24 hours as the fleet sailed, motorsailed, and motored south toward Turtle Bay. For the first time, the fleet is now visible on the PredictWind fleet tracker, complete with wind overlay from Windy. These are the conditions those light-air downwind sails are designed for, and they keep the course colorful as everyone seeks a few knots of boatspeed. Since it is a rally, there’s no need to rush, and it’s a great opportunity to practice south-of-the-border cruise mode.

The Ha-Ha start on San Diego Bay attracted quite a bit of news coverage and became the cover image on Tuesday’s San Diego Union-Tribune. It was also featured on several TV stations as the fleet headed out past the south end of Shelter Island for the open ocean. It was Zacary Singer’s Andrews 56 Encore on the cover, sailing with captain Eugenie Russell. Zac was featured in our February 2022 issue with a story about a major life course change after he was diagnosed with MS, and then learned to sail with help from Eugenie in Puerto Vallarta. He then started SailMS to help others with MS. Four of the six crew aboard Encore have MS, and all were excited to be sailing south as they departed wearing their sailing superhero Halloween costumes.

San Diego Bay is another spectacular West Coast venue for sailing. Though often with much lighter air than the Bay Area, it does come with flatter, warmer water and warm sailing temperatures. The past weekend the San Diego Yacht Club ran the Lipton Cup on San Diego Bay, and the weekend before it was the Masters Regatta. Walking Shelter Island, we saw Adjuticator in the boatyard getting ready for a season in the south after her winning performance at the recent Rolex Big Boat Series. All this activity is surrounded by the Port of San Diego, which manages all the port property, so it’s always good to see them turn out for a sailing event and to present it to a wider San Diego Bay audience. The Baja Ha-Ha put on a good showing on Monday morning.

There’s windy weather to the north that looks as if it will give some of the tail end of the fleet a breezy finish as they approach the protection of Turtle Bay. This will be a change from the benign conditions shown on the news on San Diego Bay, but it surely will be a fine finish to the 350-mile first leg of the Baja Ha-Ha.

Welcome back to Latitude 38’s podcast, Good Jibes! This week we’re casting off with host Nicki Bennett and circumnavigator Jeanne Socrates to chat about singlehanding around the globe — again and again, and again.

Throughout October we celebrated the one-year anniversary of our Good Jibes podcast by giving listeners the chance to win one of five sets of Spracht BoneHead Sport headsets. The entry requirements were simple — sign up for the weekly Good Jibes newsletter between October 1 and 31.

This morning we drew five winners from the list of new subscribers and emailed them. If you received an email with the subject line “Congratulations! You won!” reply to the email ASAP to confirm your prize. Winners’ names will be announced on Friday.

Now, back to this week’s episode…

Hear how to get started sailing later in life and go from inexperienced sailor to sailing around the world, stories from Jeanne’s 4.5 circumnavigations, what it’s like being out there alone for 11 months, and why sailing brings people together.

This episode covers everything from radio to dolphins. Here’s a small sample of what you will hear:

This episode is brought to you by Dream Yacht — Become a yacht owner and sail the world with Dream Yacht. 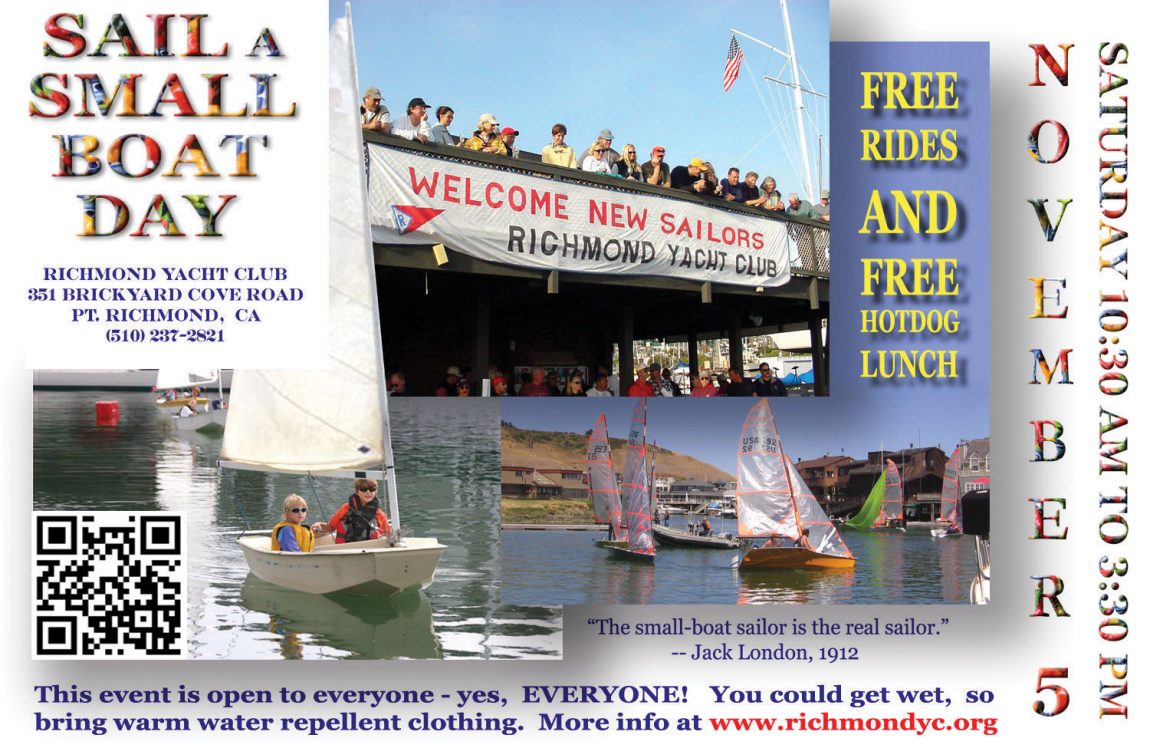 Mark your calendar for Richmond Yacht Club‘s Sail a Small Boat Day! The event is open to everyone. November 5, from 10:30 a.m. to 3:30 p.m. For more info go to www.richmondyc.org.

It’s official — San Diego Yacht Club is the winner of the 2022 Sir Thomas Lipton Challenge Cup. The home team has done it again.

Each team rotated among the fleet of 11 equalized J/105s after each race. In alphabetical order, the 11 teams were:

It all came down to the battle of the coasts on Sunday, October 30, the last of day of the three-day regatta. After 10 highly competitive and close races, SDYC and New York YC got off the starting line one more time, determined to prove which coast is best.

“It’s just staying in the fight and continuing to battle. When it wasn’t looking good, we stayed in it and never lost faith. It worked out for us,” commented Tyler Sinks upon their champagne arrival back at the club.

SDYC’s Tyler Sinks is no stranger to the Lipton Cup championship title. In fact, the skipper has won five of the last seven regattas (2022, 2021, 2018, 2017 and 2015; there was no Lipton Cup in 2020). Sinks’ team of Erik Shampain, Nevin Snow, Max Hutcheson, Lucy Wallace, Jake La Dow and Nick Kaschak can be found sailing together quite often. Erik Shampain is actually the winningest Lipton Cup sailor of all time.

Shampain commented, “I’ve been told that Dave Ullman and Dennis Conner have six wins, and this is my seventh. I was really honored when Dave called me a few days ago and said, ‘If anybody breaks it, I’m glad it’s you.’ That was really nice.

“We were trying to get off the start line, get clean races, sail by ourselves, and keep an eye on the competition. We had a nice last start right above New York, and we controlled our destiny,” he continued.

Commodore Jeff Tadder congratulated SDYC on another job well done. “It’s a great honor to keep the trophy at home. Thank you to all the yacht clubs that came out to compete in SDYC’s signature event, and to all of the volunteers who made this an amazing weekend on and off the water.”

When we received Kaz Adams’ photos for our October Sailagram page, we were inspired to find out why these women were smiling so much. As it turns out, it was because they were loving the experience of learning to sail with a new women-identifying sailing program, #SheSailorBWS. The program was initiated by Capt. Kaz Adams at Marina del Rey’s Bluewater Sailing. #SheSailorBWS is designed to help women-identifying persons to find a place of community and camaraderie out on the water through first learning to sail as competent crew, and then moving on to become confident skippers.

“I want to empower women on the water to command the respect they deserve at any level of sailing experience and make it FUN,” Kaz explains. “There is a real need in the maritime industry. There is a very established history of men in the sailing world, and I am looking to expand the same experience for women-identifying persons.”

Capt. Kaz began sailing at age 17 after accepting a dare. She started on the Finger Lakes of New York, and then later sailed in Boston. Over the following years she raced, taught in several schools across North America, conducted over 60 charters worldwide, and ran an owner delivery service (with her sailing dog Lola aboard) from Florida to Pacific Costa Rica, including a Panama Canal transit.

Using her experience as an adjunct professor, teaching leadership and communication at two universities, Kaz puts her skills into practice when approaching students’ learning styles for sailing, fine-tuning it for communication styles more dominant in women.

“Also, I have a deep love of the ocean, and teaching allows me to share and inspire others to follow a similar, more environmentally-friendly practice in life,” she adds.

Currently, Kaz is the only female dock personnel and is therefore doing all the instruction. The program is structured in alignment with the American Sailing standards and the extended Bluewater Sailing programs aboard Catalina 22s and Capris, and larger Catalinas for the more advanced students.

The first #SheSailorBWS event, BK1, took place in mid-October, and the next one, BK2, is scheduled for November 19-20. Further classes are scheduled for this year and next, including a multi-certification class in the Caribbean that is in the works for next May — “women only!”

We love the sailing community! You guys are awesome and we appreciate the photos you send us each month. It helps keeps us in tune with what’s going on out there on the water, even when we’re at our desks writing about sailing. Thank you! Check out October’s Sailagram photos. 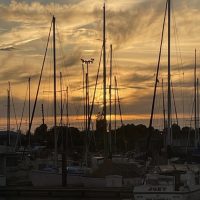 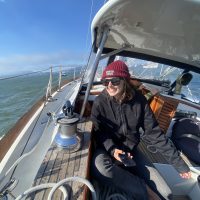 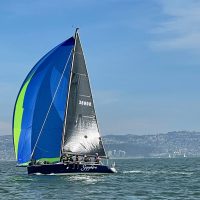 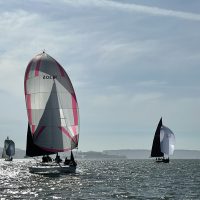 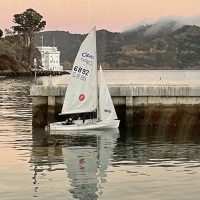 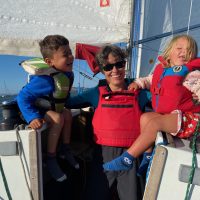 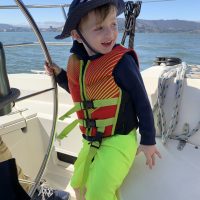 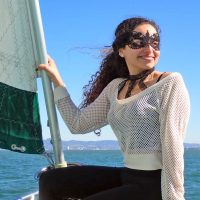 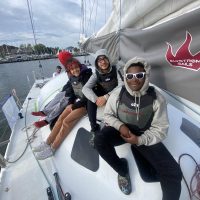 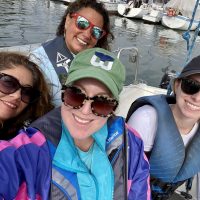 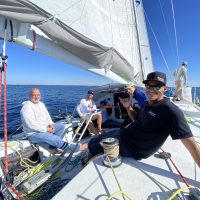 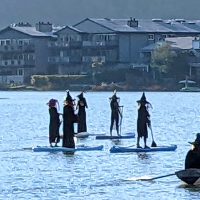 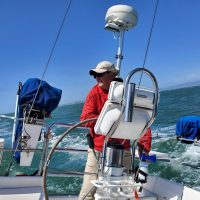 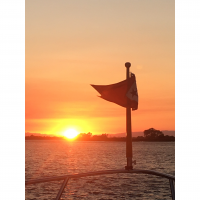 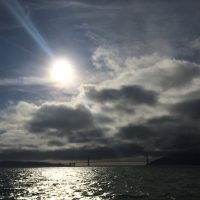 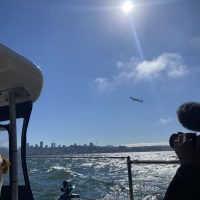 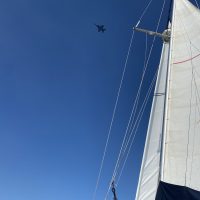 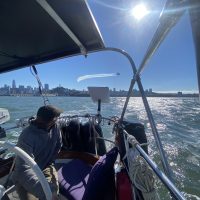 View Slideshow
1 2 ... 5 ►
Don’t miss out on being included in next month’s Sailagram! Send your sailing photos to [email protected].
SHARE ON Tweet Share Email Linkedln
Leave a comment
Receive emails when 'Lectronic Latitude is updated. SUBSCRIBE
'Lectronic Latitude: Monday, Oct 31
Heading South
Twenty-Eighth Baja Ha-Ha Fleet Is Headed to Mexico
The 28th Baja Ha-Ha Cruising Rally is underway, with the fleet having cast off from San Diego at 10:00 this morning.
Massive Greatness
The Great Pumpkin Visits Richmond Yacht Club
What made this particular edition of the Great Pumpkin so epic?
Sponsored Post
Online Yacht Auction of 1985 Ocean Alexander 70
Online Yacht Auction of 1985 Ocean Alexander 70. Online bidding starts Tuesday, November 8, 2022. Panoramic tour and extensive photo gallery available at www.WestAuction.com.
Channel Surfing
From the Bay to the Channel Islands
We will take this seasonal moment to contemplate the Channel Islands, and the mainland cities near them, as if we were back in 2020 when the "staycation" offered sailors self-isolated silver linings at local destinations.
Get Your Hands on a Copy
November’s Latitude 38 Is on the Docks Tomorrow!
Happy Halloween, and welcome to November's 'Latitude 38.' We know we're teasing, but check out the preview below, then set your alarm to go get your copy first thing tomorrow!
Sponsored Post
Sail a Small Boat Day at Richmond Yacht Club
Mark your calendar for Richmond Yacht Club's Sail a Small Boat Day! The event is open to everyone. November 5, from 10:30 a.m. to 3:30 p.m.
More 'Lectronics »
Report Listing