The activities at Barra de Navidad Cruise-In Week continue. On Monday, a dozen boats departed Marina Puerto Navidad for a sailing excursion, on-the-water concert, and sunset cruise along the beach. Each participating boat took passengers, many — probably most — of them non-sailors. The guests paid for the privilege, with all funds collected benefiting local schools.

“Counting Antipodes, our music and dignitary boat, we had 12 vessels on the water Monday and 11 out Tuesday,” says event organizer Elinore Craig. “Sixteen boats registered for the Flamingo Regatta on Friday. Altogether, there are 23 boats registered for Cruise-In Week events.”

After the sailors and their guests had enjoyed a pleasant sail in a 7- to 8-knot south-southwesterly, they gathered to enjoy tunes provided by an excellent singer, Wendy Laurier. Like many of the paying passengers (and some of the cruisers), Wendy’s from Canada. After a year of pandemic lockdown including a northern winter, the Canadians were happy to escape to the tropical paradise of Mexico’s Costalegre, some for a few weeks, others for a few months. The region’s very popular among those from north of two borders!

On Tuesday, a morning sail-out comprised the day’s Cruise-In Week activities. Paddleboard and kayak races are on the agenda for this afternoon, off the beach in front of the Grand Bay Hotel adjacent to the marina. Thursday, a street market in the town of Barra de Navidad and a movie night are on tap.

Friday will see the main event, the Flamingo FUNd Race. An awards ceremony on the malecon in front of the harbormaster’s office will follow in the evening. A weekend swap meet, family game day and a Super Bowl party will wrap up the week of activities.

Welcome to Latitude 38‘s Good Jibes! This week, Nicki Bennett chats with Mike Parlacoski. Mike is a Navy veteran who embraces the mission of ikigai — a Japanese concept referring to something that gives a person a sense of purpose, a reason for being. Mike’s ikigai is to travel the world and deliver medical and humanitarian aid to the cultures he comes across.

This episode covers everything from stocking up to troubleshooting. Hear Mike’s thoughts on how to find your ikigai, how to prepare for a long sailing journey, how to fix your boat when trouble arises, how to make an impact on the communities around you, and the generosity of sailors.

Learn more about Mike at SVikigai.com and on Instagram @SV_ikigai.

The gleaming 75-ft schooner Viveka was relaunched in fall 2020 after a five-year restoration at Rutherford’s Boat Shop in Richmond. Since then she’s been delivered to her new home waters, in the Mediterranean, under the ownership of British entrepreneur Sir Keith Mills.

Many readers will remember seeing Viveka sailing the Bay under her longtime owner, Merle Peterson, the President of the Pacific Ocean. She was also a regular feature at boat shows such as the Master Mariners Wooden Boat Show, which is coming up at the Corinthian Yacht Club on June 26. One of the show’s organizers, Randall von Wedel, tells us that Viveka has been nominated by Classic Boat magazine in the UK for 2022’s Best Restored Sailing Vessel over 40-ft.

You will get a good idea of why the schooner is a good candidate when you watch Mike Holmes’ video below, or read about her five-year restoration in our May 2020 issue.

If you’d like to vote for our famed former Bay Area resident, you can vote for best classic boat restoration here. She’s certainly deserving of the award.

In January 2021 Mike Holmes wrote about sailing Viveka south to San Diego so she could be shipped from Mexico to Europe. The beautiful Viveka may have sailed on, but she is not forgotten.

Jay Whitlan sails out of Parkshore Marina, Seattle, aboard his Laguna 26, named Sqoop. An unusual name, don’t you think? We do. But when we read Jay’s account of his project to turn a sloop into a square-rigged vessel, it began to make sense …

Ever since I got bitten by the sailing bug, I’ve been fascinated by square-rigged vessels. It started during a holiday visit to Lisbon’s Maritime Museum. I was dumbfounded by the profusion of sails and plethora of lines I saw on the detailed models of Portuguese brigs, carracks (“a three- or four-masted oceangoing sailing ship developed in the 14th to 15th centuries in Europe”) and galleons. As I started my sailing education, two events galvanized my interest in square riggers: I took a daysail (as a paying passenger) on the Lady Washington, and I discovered Patrick O’Brian’s novels about life in the British navy during the early 19th century. As a novice sailor whose nautical vocabulary was limited to the terms needed to sail a single-masted vessel with just a mainsail and foresail, I was captivated by the procedures used to maneuver a three-masted British warship with over 20 sails and innumerable control lines; how did the crew ever figure out which line to clap onto at the fife rail?!

When I first contemplated a foray into boat ownership, I originally intended to find an old, beaten-up (perhaps even dismasted) sloop I could convert into a hybrid cruiser that would motor upwind, and sail downwind with a single square sail. I eventually found a worn-out Laguna 26 that met my rather unique ‘must-have’ criteria, and I purchased her on the day of the original COVID lockdown order. This turned out to be a true blessing in disguise. The subsequent economic slowdown and my resultant leave of absence from work allowed me all the time in the world to plod along patiently, as a new boat owner, making needed repairs and figuring out the best way to rig her to fly a square sail. This required a lot of staring at the mast and mentally visualizing one unconventional configuration after another. I searched YouTube and lurked on the sailing forums but could not initially find anyone else crazy enough to attempt a similar conversion. As the refit began and the design evolved, I figured out it was possible to have a vessel that could hoist a square sail when running downwind, and still sail upwind as a fore-and-aft-rigged sloop.

Here is a synopsis of the rigging:

The head of the square sail is attached in three places to a yard (horizontal spar). The center of the yard is attached to a battcar, which slides along a T-track; this track is attached to the front of the mast and runs about two thirds of the way up the mast. The main halyard is reversed and attached to the yard. Braces are attached to each end of the yard (yardarms) and run back to the stern through blocks and cam cleats. The braces absorb the load of the sail’s head and also allow you to trim the top of the sail by rotating the yard to best capture the apparent wind. The sheets are attached to the sail’s clews (bottom corners) and transmit the sail’s foot loads to the winches, just as with any foresail. Two whisker poles (cross-jacks) and the associated foreguys help keep the sail inflated as the wind shifts and the boat rolls and pitches. I also attach two running backstays, when the wind gets above 10 knots, to counteract the large bending movement the sail could potentially impose on the mast.

I find the square sail to be effective over a wider range of downwind angles than a spinnaker or wing-on-wing configuration. I won’t claim the square sail is superior for running before the wind, but it certainly is unique!

If you’d like to learn a little more about Jay’s square sail, you can read about what he calls his “rather wacky journey” here. 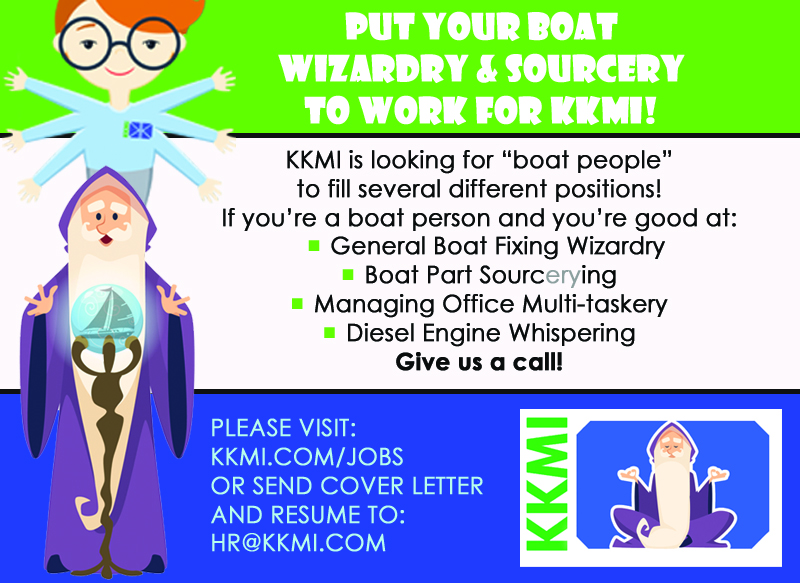 SHARE ON Tweet Share Email Linkedln
Receive emails when 'Lectronic Latitude is updated. SUBSCRIBE
'Lectronic Latitude: Monday, Feb 7
Barra de Navidad Cruise-In Week
Building Boats and Friendships
Several kids and a couple of grownups got an early start on the Barra de Navidad Cruise-In Week Sunday morning.
TIME TO HEAD SOUTH
Ready? It’s Time to Start Cruising in Mexico
Sydney and Dalton are finally pushing off from San Diego and are heading south aboard their Morgan Out Island 33 'Mihaly.'
Sponsored Post
Swiftsure Yachts: Serving the West Coast
Swiftsure serves the West Coast from Seattle and four other waterfronts.
Sailors Go Everywhere
The Wide World of Sailing — In More Ways Than One
Sailing is truly a world-widening activity — even if you’re not actually on a boat.
Winners To Be Announced Soon
Rolex Yachtsman and Yachtswoman of the Year Shortlist Announced
US Sailing has announced the shortlist for the 2021 Rolex Yachtsman and Yachtswoman of the Year Awards.
More 'Lectronics »
Report Listing