At around 6:00 a.m. Tuesday, November 23, Steve Ingram and Allie Hawkins received a phone call from their liveaboard dock neighbor at Marina Bay Yacht Harbor, Richmond, that a sailboat was close to crashing into their charter boat, Gas Light. The sailboat had been untied from the dock and was drifting through the marina, with a very agitated man aboard.

“It was quite the wake-up call yesterday,” Allie told us.

“We are just so grateful for the liveaboard that called the police, and [the] harbormaster’s quick actions to keep all the boats safe!”

Aaron Reamy, the sailor who alerted the police, said he had stumbled across the incident as he was walking up to the restrooms at around 5:00 a.m. “Someone had just climbed over the wall,” Aaron said. “I couldn’t really see him; he was backlit.”

Being new to the area and the marina, Aaron chose to be cautious and not approach the unknown person. However after a hurried stop at the restrooms he came back to see where the person had gone. “I saw a flashlight near the bow of my boat.” Aaron hurried back down the dock, by which time the intruder was hanging off the back of a nearby Cal 2-46.

I called out, “Hey man, there’s people on all of these boats, you should get the f%#@$ out of here!

“I woke my wife and turned on all the lights and dock lights.”

Aaron then knocked on the hull of the boat next to the Cal 2-46. The owner, Tom, had heard a commotion and was already up and dressed. Aaron left his wife and Tom to keep an eye on the sailboat, and made the calls to the police and harbormaster. Tom took his task one step further and followed the drifting sailboat in his kayak.

“What a hero!” Allie wrote.

Allie told us that the Cal 2-46 was locked, thus preventing the intruder from starting the engine. “He attempted to scull the boat by rocking it back and forth and moving the wheel. He had made his way very slowly across the marina with barely any wind.” Allie and Steve are very grateful to everyone who was involved in preventing the theft, and in protecting their boat.

“Gas Light’s neighbor, Connor, used his long boat hook to keep the stolen boat off Gas Light. Apparently, the boat had drifted, with the thief aboard, to only a few feet from Gas Light’s starboard beam! Then, a few minutes later, Steve Orosz, the harbormaster, was using his Boston Whaler to fend off the Cal 2-46 from Gas Light.

“This is when we arrived and the rest was caught on camera.” NOTE: Language Warning. If foul language offends you, turn the sound off before starting the video!

We called both the marina office and the Richmond PD but were unable to get any more details before going to press. However it did appear to witnesses that the perpetrator was known to the police.

As Allie wrote on her Facebook post about the incident, “This is why you need to lock your boat and get to know your boat neighbors!”

Welcome to Good Jibes, Episode #16. This week’s host John Arndt is joined by Bill Trenkle to chat about a lifetime of sailing, racing, and boat love. Bill is a member of the America’s Cup Hall of Fame and has been president and director of operations for Dennis Conner Sports since 1996. 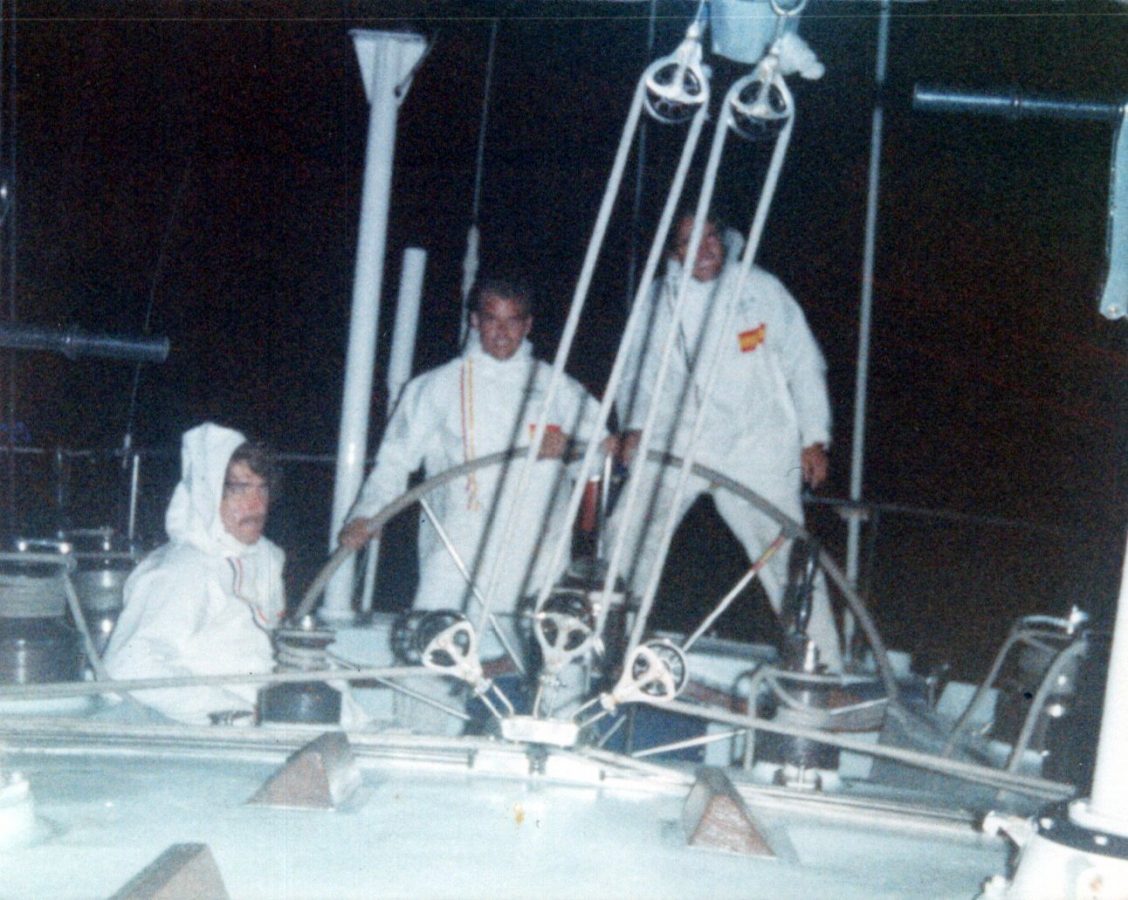 Bill is also president of The Society of Accredited Marine Surveyors and has won the America’s Cup three times.

Hear how to go from junior sailor to professional sailor and learn to sail competitively; about boatbuilding skills and why you should cut your hair before a race; and stories from racing and working with Dennis Conner in eight America’s Cups. This episode covers everything from building boats to winning the America’s Cup.

You can read more at https://www.latitude38.com/lectronic/one-of-the-good-guys-bill-trenkle/.

Check out the episode and show notes for more detail. Then listen to this and previous episodes on Apple Podcasts, Spotify, Google Podcasts, and your other favorite podcast spots — follow and leave a 5-star review if you’re feeling the good jibes! 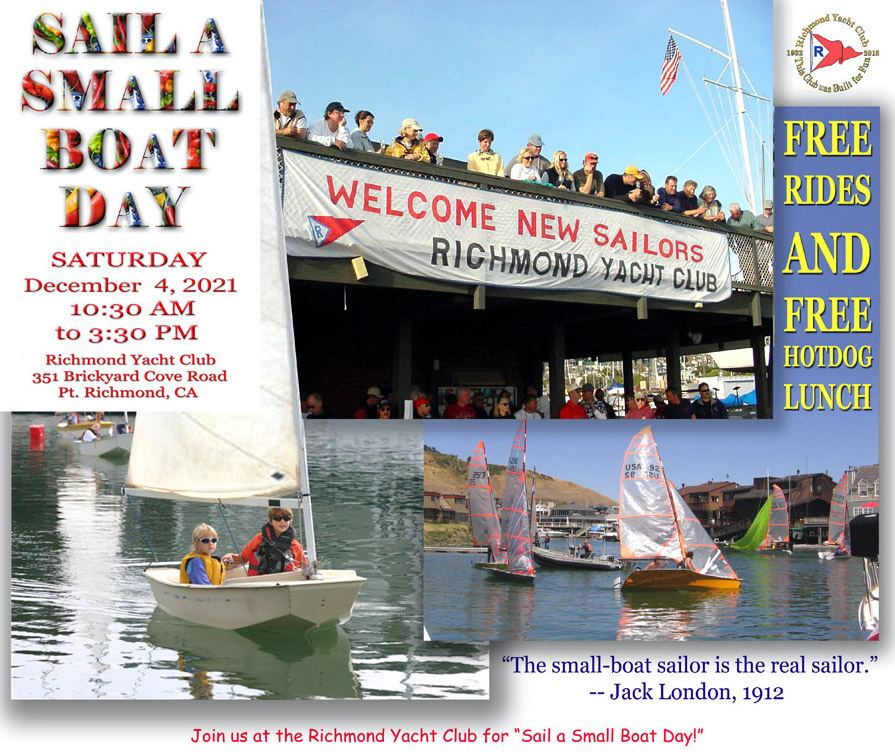 Where does the time go? It’s already two weeks ago that we attended the Sailing Science Center of San Francisco fundraising gala at the Bay Model in Sausalito. It’s been a difficult stretch for organizations to run fundraising events, so we were happy to see a crowd gathered to support the crew assembled around Jim Hancock’s vision of an interactive science museum, framed around sailing. It’s a sign of progress on all fronts.

Since 2017 the Sailing Science Centerhas been building momentum around the creation of the interactive museum on the shores of Clipper Cove on Treasure Island. As funds are raised to secure the site and long-term development, the Sailing Science Center is already creating exhibits and touring with them in a mobile trailer to share the technical lessons of sailing to audiences around the Bay.

Everyone who sails knows there’s much more to sailing than an afternoon on the Bay. There is the weather around us, the currents below us, the mechanical advantage of sailboat systems, oceanography, both hydrodynamics and aerodynamics, and the integration of all these elements to move a boat gracefully through the water. There’s a lot going on that the casual passenger doesn’t see and a lot of opportunities for both sailors and non-sailors to better understand the world as the lessons of sailing are put on display.

The assembled crowd demonstrated support with both spirit and funds to continue the growth of the Sailing Science Center. The maritime heritage of Sausalito and the Bay Model were a perfect venue to showcase the results possible when science and human ingenuity meet. Ideally, it’s the continuation of the trend where we can all meet in person to support the causes we care about.

The Bay Area is an ideal venue for such an institution. Watching the idea grow through the headwinds of a pandemic is a sure demonstration of Newton’s first law of inertia, where an object in motion stays in motion with the same speed and in the same direction unless acted upon by an unbalanced force. The outside forces have not slowed this project down, and with Jim Hancock’s steady hand at the helm, we look forward to a new ‘opening day’ when the museum opens beside the Bay. To learn more or get involved click here.

US Sailing Rolex Yachtsman and Yachtswoman of the Year

US Sailing honors the year’s top-performing sailors with the Rolex Yachtsman and Yachtswoman of the Year. The nomination period is now open to the public. Fans can nominate male and female sailors who they believe turned in the most outstanding on-the-water performances during the 2021 calendar year.

Do you know of an American sailor who performed extraordinarily well at the highest levels of competition in 2021? Your nomination(s) may ensure a deserving sailor will receive the proper recognition in the history of the sport. Make your nominations at ussailing.org/rolex.

Nominations will close on December 31. US Sailing will then select three finalists for each gender based on the merits of the nominees. The finalists will be posted to a ballot and presented to panels of past award winners and sailing media journalists. Following the success of including a public vote in 2019, the public will again have an opportunity to vote online for the 2021 winners. The online public voting will begin in January following the shortlist announcement. Votes from the three voting groups will count equally toward determining the winners.

Also like last time, the 2021 winners will be announced live at the US Sailing Awards Ceremony in late winter/early spring on a date and at a location to be determined later this year. Winners will receive the Rolex Yachtsman and Yachtswoman of the Year award and specially engraved Rolex timepieces.

International 5O5 World Champions Mike Martin and Adam Lowry (both of Mill Valley), and IKA Formula Kite Class World Champion Daniella Moroz (of Lafayette) were selected as Rolex Yachtsmen and Yachtswoman of the Year for their remarkable sailing performances in 2019.

The World Sailing Awards 2021 — celebrating the outstanding achievements and exceptional contributions to sailing — is now open for online voting (click here). Public voting will close at 1500 UTC on December 2. (That’s 7 a.m. for those of us in the Pacific time zone.) The winners will be revealed that day on the World Sailing Awards online show. World Sailing’s news release doesn’t say how to watch the online show, but you can find the organization’s YouTube channel at www.youtube.com/worldsailingtv.

World Sailing’s 146 Member National Associations and its 119 Classes nominated a record number of 39 athletes representing 19 countries this year. Thirteen athletes — including Olympic medalists, major offshore series winners, a kite world champion and new around-the-world record-setter — made the shortlist for their achievements between September 1, 2019, and August 31, 2021.

Read about the nominees here.

In the bio for nominee Daniela Moroz (Lafayette, CA), World Sailing wrote: “Nobody has dominated a discipline during the qualifying period of the World Sailing Awards like Moroz, who has set the standard for women through the entire evolution of kite competition. With gold at the 2019 World Beach Games contributing to her recognition in 2020 as US Sailing Rolex Yachtswoman of the Year, she stamped her authority on the Formula Kite Class by steamrolling the fleets in the 2021 European and World Championships, her fifth world title. Her ability is now being applied as a member of the United States SailGP Team.”

We’ve covered Moroz’s career quite a bit in ‘Lectronic Latitude and in Latitude 38 magazine.

Due to the limitations on travel in 2020, there were no awards for that year.

Ready to ditch the crowds ashore? Weekends are for sailing and long weekends are for more sailing. The weather looks good for Blue Friday, our chance for an alternative to mall madness. Saturday and Sunday also look good for a repeat of the beautiful sailing we had last weekend, when we caught the scene below of a comfortable social sail on the Bay.

We’re grateful to our readers, advertisers and the sailing community for allowing us to share the world of sailing through the eyes of the West Coast sailor. If you have a story from your Thanksgiving weekend, email us at [email protected], or if you have photos for Sailagram send them to [email protected]. There will be no ‘Lectronic Latitude on Friday. Have a great Thanksgiving weekend, and we hope you have a chance to #optsailing on Blue Friday. 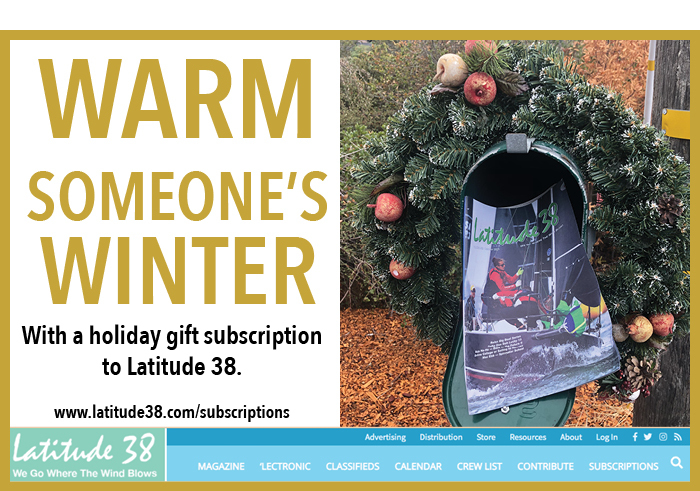 SHARE ON Tweet Share Email Linkedln
Receive emails when 'Lectronic Latitude is updated. SUBSCRIBE
'Lectronic Latitude: Monday, Nov 22
Start Small and Dream Big
UpWind Sailing in Puerto Los Cabos Takes a Flyer
Baja Ha-Ha sailor Wayne Koide invited a dozen kids from UpWind Sailing School in Los Cabos to tour his Outbound 46 'Flyer.'
HOT RUM AND SUN IN SAN DIEGO
San Diego Sailing Beyond the Baja Ha-Ha
Aside from immersing ourselves in the excitement of 600 people about to sail to Mexico, we love the start of the Baja Ha-Ha because it's a great opportunity to connect with San Diego's thriving sailing culture.
Sponsored Post
Westwind Boat Detailing Offers Washing, Waxing and Varnishing
Washing, waxing, varnishing. “Everything looks great! It was a huge relief."
Big Fun for Everyone
Sail a Small Boat at Richmond Yacht Club
Richmond Yacht Club (RYC) is pleased to announce the 29th Sail a Small Boat Day to be held on December 4, from 10:30 a.m. to 3:30 p.m.
Americans Take Fourth at 49er Worlds
USA a Tiebreaker Away from the Podium in Oman
Oman played host to the 2021 49er and Nacra 17 Worlds on November 16-21.
Sponsored Post
Sell Your Boat Faster with Seacoast
Sell your boat faster with Seacoast! Your go-to yacht brokerage, serving local boating communities along the West Coast.
More 'Lectronics »
Report Listing