Richmond Yacht Club’s Wayne Koide, who spent years successfully racing his Sydney 36 CR Encore, has gone cruising with the 2021 Baja Ha-Ha aboard his new-to-him Outbound 46, Flyer. Along the way, Wayne sailed into Puerto Los Cabos, where he ran into UpWind Sailing School’s Charlie Bogue. Wayne has always been passionate about kids’ sailing, having founded StemSail in Richmond to give kids training in science, technology, engineering and math, through sailing. So it is no surprise that when he bumped into Charlie, Wayne quickly found himself sharing sailing with UpWind’s junior sailors.

“We were lucky to have been hooked up with a bunch of youth sailors while we were staying in San Jose del Cabo. Their instructor Charlie, who is a neighbor of our friends who live there, brought over 12 of his middle-school student-sailors to tour Flyer, our Outbound 46,” Wayne wrote. “We talked about sailing long distances on a boat, watch systems, cooking, watermakers and even the marine head. Hands-on experience using the electric winches too. Judging by the number of questions asked and the engaging charm of youthful curiosity, they thoroughly enjoyed their time with us. Their closing question: ‘Why don’t we see any fresh vegetables on the boat? Only potato chips and cookies!!’ BUSTED!”

Charlie Bogue, UpWind Sailing School’s program director, told us the Baja Ha-Ha brought much fun and a new perspective to the young sailors.

“The 2021 Baja Ha-Ha Cruisers Rally, including over 170 sailboats, arrived from San Diego, California, in our home waters of Los Cabos. The marinas were full and many of the boats were seen anchored off Medano Beach, and later on the inside waters of Puerto Los Cabos. The young sailors of the UpWind Sailing School in La Playa were treated to a special surprise when Captain Wayne Koide and his crew invited them aboard Flyer.

“The sailing students were given a tour above and below deck of this beautiful floating vessel. The kids were all eyes and ears as they heard of the crew’s trip south and were able to man the helm and dream of what the future of sailing could be. After a big thank you for the visit Flyer left the harbor, along with many other Baja Ha-Ha boats en route to La Paz, all with plans to head down the coast of Mexico and eventually east to the Caribbean, or west to the open waters of the Pacific fulfilling their lifetime dreams of open water cruising.”

Following his stay in Puerto Los Cabos, Wayne sailed on to reconnect with other Bay Area Baja Ha-Ha sailors and continue the adventure that began on November 1.

We love going to San Diego for the start of the Baja Ha-Ha, because there’s nothing better than the excitement of 600 people about to start out on their dream voyage to Mexico. However, it’s also a great opportunity to connect with San Diego’s thriving sailing culture. We tour the waterfront to see customers and other happenings around the Bay.

On Monday afternoon, after the huge Baja Ha-Ha fleet had sailed south, the marinas remained full of sailboats ready to sail. The San Diego Yacht Club has well over 100 boats signed up for the winter Hot Rum Regatta, with its second event held this past weekend on November 20.

There’s much more to see and sail, but time is short and we had to get north to tend to the upcoming December issue.

“We do this event to connect people in the Bay Area with small boat sailing. We expect that over 30 boats will be on the water and as many as 200 people may attend throughout the day. The club provides a free hot dog lunch for you and all who show up,” RYC wrote.

Bring your wetsuit and PFD if you have them, or warm, water-repellent clothing, and a change of clothes in case you do get wet. The boat rides are all free and are available on a first come, first served basis.

“Some small boats are complicated and some are simple. Some boats never change and some change all the time. Some move at light speed and some move at a more leisurely pace. Some are tippy and some are stable. Find the boat and fleet that are right for you!”

If you’re thinking about going along but are feeling a little unsure, here’s a wrap-up of the 2019 Sail a Small Boat Day.

The Richmond Yacht Club is located at 351 Brickyard Cove Road, Point Richmond, 94801, near the east end of the Richmond-San Rafael Bridge. 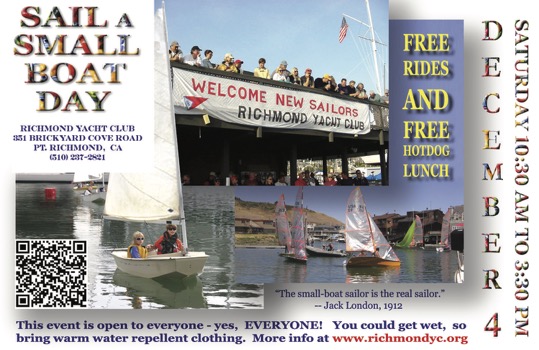 Oman played host to the 2021 49er and Nacra 17 Worlds on November 16-21. The final fleet and medal races yesterday highlighted strategy, execution and nail-biting finishes. Ian Barrows and Hans Henken tied for third place, barely missing the bronze medal by a tiebreaker and ultimately finishing fourth in a field of 36 skiffs from 21 nations.

The 29-year-old Hans Henken, you might recall, comes from the San Diego area. In college, he sailed for Stanford, where he became the 2015 Conference Male Athlete of the Year, and went on to join the US SailGP team. He belongs to Coronado Yacht Club and St. Francis YC.

“This was our first Worlds as a team, so our goal was to finish 10th in the fleet races and get a shot at the medal race,” said Hans. “Heading into the medal race with at least a top-10 finish locked in gave us a sense of freedom to sail and lay it all out on the water. We executed, we had fun, and we walked away with a fourth-place finish. We’re proud of what we accomplished as a team and are just really stoked.”

“We came together in Oman and worked hard as a team,” said Paul Cayard, executive director of US Olympic Sailing. “As a result, our 49ers finished the highest they have at this regatta in decades. It’s great to see the hard work pay off, and we build on this from here.”

Olympic sailor Riley Gibbs is coaching the American Nacra 17 team of mixed-gender foiling catamarans. Gibbs, a 25-year-old from Long Beach, sailed with Henken on the US SailGP team. He went to Orange Coast College and belongs to Alamitos Bay YC and StFYC.

Read more about Henken and Gibbs in the April 2019 issue of Latitude 38, and a profile of Riley Gibbs in the May 2020 issue.

For complete results, news and video from the Worlds in Oman, see https://49er.org/event/2021-world-championship.

SHARE ON Tweet Share Email Linkedln
Receive emails when 'Lectronic Latitude is updated. SUBSCRIBE
'Lectronic Latitude: Friday, Nov 19
Early Morning Blaze
Fire Aboard Powerboat Threatens Petaluma Docks
Boaters tied alongside the docks on the Petaluma River were woken by a fire aboard a neighboring boat early on Saturday morning.
Splasher Brother Makes a Splash
Has Golden State Warrior Klay Thompson Been Bitten by the Boating Bug?
Golden State Warrior Klay Thompson, discovers boating on San Francisco Bay.
Sponsored Post
Club Nautique Is Hiring
We're looking for a Membership Sales Director and part time Front Office Associate.
Crossing the Atlantic in Ones and Twos
Transat Jacques Vabre and Mini Transat Update
After more than 12 days of racing in the 15th edition of the Transat Jacques Vabre from France to the Caribbean, the top boats in each division are now entering the home stretch.
Just the Facts, Please
America’s Cup 37 Protocol Announced
With the release of the Protocol for the 37th America’s Cup by Emirates Team New Zealand and INEOS Britannia we have learned a lot and really very little at the same time.
Sponsored Post
San Francisco on the Bay: “Trail Guide”
Discover San Francisco Bay and all that inspires those of us who live or visit here.
More 'Lectronics »
Report Listing