After the disappointment of a ‘no show’ last year, we’re excited to see Fleet Week returning to San Francisco Bay. This annual event has to be one of the highlights of the year, and thousands of people will be descending upon the Bay and foreshores to view the aerial display of the US Navy Blue Angels — this year in their new aircraft, the F-18 Super Hornet. Also on show will be the USAF F-16 Viper Demo Team, Navy Parachute Team, the Red Bull helicopter, Edge 540 plane, the Red Bull Air Force Wingsuit Skydivers, a US Coast Guard Search and Rescue Demonstration, several fixed-wing aircraft flyovers … We’re going to stop trying to list it all here; there’s too much going on and we’re already giddy with excitement (well, maybe just one of us).

Here’s a quick preview of what you could see:

Back to business. The point of this post is to remind everyone that there will be enforced boundaries for boaters on the water. The USCG has circulated information and illustrations of the no-go zones on the Bay this weekend — starting tomorrow, Thursday, October 7.

The first and possibly most simple instruction issued is: “Boaters are reminded to maintain 500-yard distance from all military ships at all times.”

On Friday, October 8, at 11:00 a.m., the Navy Parade of Ships fleet will enter the Bay beneath the Golden Gate Bridge and proceed along the San Francisco waterfront, with San Francisco Fire Department’s fire boat at the lead, shooting water jets into the air to celebrate the fleet’s arrival. The Regulated Area “Alpha” — shown on “Chart 1,” below — will be enforced on Friday, October 8, between 9:30 a.m. and 12:00 p.m.

The much-anticipated air shows will be on Friday, Saturday and Sunday, so when planning your time on the water, keep in mind, there will be a lot of boats! Captains will be moving their boats around, vying for the best position. We can tell you from experience that pretty much everywhere is the best position, so don’t fall for the ‘I have to be right in the middle’ idea. These Navy pilots cover nearly every square foot of the sky above the Bay. However, to make it easier, the Coast Guard has suggested the following as the best viewing spots for the air shows and the Parade of Ships:

Here are a couple of diagrams to show you the weekend’s regulated zones:

Temporary buoys for the Air Show Box should already be in place and will be removed on October 13, 2021. The buoys at the center and northwest corner point will be partially obstructing the eastbound traffic lane, and the buoys at the northeast and southeast corners will be partially encroaching upon the precautionary area east of Alcatraz Island. The locations of the temporary buoys are listed below:

Mariners are advised to monitor VHF-FM channel 16 for up-to-date information regarding these regulated areas for safety and security. And rest assured, there will be multiple partner-agency vessels on the water this weekend, so if you do happen to overstep a boundary, they will be very quick to let you know.

Fleet Week also includes numerous shore-based events and viewing opportunities such as ships’ tours, concerts, and multiple displays and demonstrations. You can view the full schedule of events here. And for general Fleet Week information, go to the event’s home page: https://fleetweeksf.org.

This week on Good Jibes, Nicki Bennett reads an article from the August 2020 issue of Latitude 38 sailing magazine. Hear marine surveyor and US Coast Guard veteran Mike Pyzel describe why the Channel Islands offer all you could ever ask for in a cruising area in “Destination: Channel Islands.” Follow along and read the article at https://www.latitude38.com/issues/august-2020/#62.

Santa Anas are sudden northeasters that howl off the mainland from Ventura and Oxnard, and strike the north sides of the Channel Islands — especially Santa Cruz and Anacapa — with fury. These winds nearly always spring up after sunset. The biggest danger is the steep seas that pack into all the anchorages on the north side of the islands.

Don’t miss this interesting episode of Good Jibes, brought to you by the Safe Boating Campaign, in partnership with the National Safe Boating Council and US Coast Guard. Learn more at SafeBoatingCampaign.com.

Listen to the episode on Apple Podcasts, Spotify, Google Podcasts, and your other favorite podcast spots — follow and leave a five-star review if you’re feeling the Good Jibes!

You can also check out this week’s and previous podcasts here: https://www.latitude38.com/good-jibes-latitude-38s-podcast/.

Is it still OK to intentionally throw a glass bottle into the ocean, with a message locked inside? This is an era where it can feel insensitive to simply spit or pee over the rail, so we wonder how everyone feels about the age-old tradition of purposely tossing a floating bottle over the rail. Does anyone do it anymore?

We recently read a story in the Guardian about a bottle that was tossed out to sea in Japan 37 years ago and just washed up on a beach in Hawaii. Is it litter, or a really cool story of global connections made without the aid of the internet?

The bottle was released into the sea all those years ago by high school students in Japan, and was found approximately 3600 miles away on the island of Hawaii. The report says the bottles have been found in 17 different locations. We assume the rest have become sea glass.

This bottle was one of 750 thrown into the ocean to help the students investigate ocean currents. Now in their 50s, the ‘students’ are still learning, although satellites and uncrewed surface vehicles (USV), such as those produced by Saildrone, have now largely surpassed this traditional information-gathering strategy.

Thirty-seven years later we wonder how many sailors would want to toss a well-sealed bottle into the ocean to be found by a future beach wanderer this year or decades in the future. If you’re sailing to Mexico in the Baja Ha-Ha or on your own, would you toss a bottle and have folks contact us at [email protected] to see where you would have ended up if the wind and your piloting had carried you toward your intended destination? Or would you just email or call on your Iridium GO!?

How many people still practice the sailor’s ritual of tossing a message in a bottle into the ocean? You can read the rest of the story from the Guardian here.

As a West Coast-focused sailing publication, we like stories, photos and videos from our dock neighbors and other members of our local sailing community. So we’re happy to join 216,000 people in giving Bay Area sailor Mark Zuckerberg a ‘thumbs up’ for his October 3 video of a pleasant day of sailing with his wife Dr. Priscilla Chan and friends on their aptly named J/80 Shenanigans.

We discovered this video because, when posting a story on Monday including a cool video by Ty Baird shooting the 5O5 North Americans at Sail Newport with local winners Mike Martin and Adam Lowry, the darn video wouldn’t post. We assumed it was our poor web skills causing us to screw up the code to embed the video.

Little did we know that we were joining 3.2 billion people who were having similar problems. It was nice to know we weren’t alone and we were sharing the experience with our entire community of Facebook friends.

It’s an endearing video of the simple pleasures of sailing, which are surely a pleasant break from congressional hearings, whistleblowers, Instagram’s impact on young teenagers, antitrust lawsuits and five-hour site blackouts. The boat is probably just big enough to take all his friends in Washington, DC, sailing.

Then we thought, what happens if Mark and Priscilla want to take all their friends out on a boat? It turns out they may have solved that issue too.

We’ve heard rumors the Zuckerbergs had purchased the 330-ft megayacht Ulysses, complete with a 70-ft tender, helicopters, ATVs, jet skis and all the rest of the other carbon-fueled toys critical to a relaxing getaway. With a carbon footprint the size of the state of Vermont, Ulysses was originally built for Graeme Hart from the small sailing nation of New Zealand. He’s decided he needed a bigger boat. However, our Google sleuthing turned up stories saying the Zuckerbergs aren’t the owners, and, since Mark hasn’t posted a photo on Facebook along with his other boating adventures, perhaps they don’t own it. Can anyone confirm?

We do appreciate everyone who finds fun, adventure and solace sailing on the sea. We’ll keep an eye out for the Zuckerbergs sailing the Bay.

Addendum: We did get a call from an anonymous reader who understood our story to be making light of the scandals enveloping Facebook and Instagram. We admit we were making light of it but more with the notion that Zuckerberg’s ‘carefree’ sailing posts remind us of Nero playing the lyre as Rome burned. Our post did not make this clear. We agree with the caller that Facebook has had a huge, negative impact on civil society, democracy, public health, both mental and physical, and is a detriment to all people and especially youth. One thing we’ve always greatly appreciated is the very civil tone and respect most all sailors use to communicate with each other or when sending comments and letters to us. We will thank our anonymous caller for first picking up the phone to express his concerns and to take us to task in such a civil manner. He’s very concerned about the impact of Instagram on his two young daughters and we share his concern for them and society in general.

Didn’t think we’d forgotten about September’s Sailagram, did you? Check out these great photos of our community last month, on and off the water. Don’t miss out on being included in next month’s Sailagram! Send your sailing photos to [email protected]. 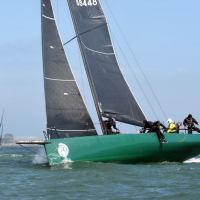 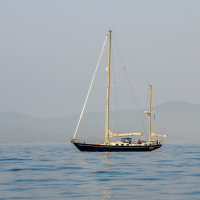 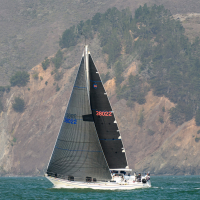 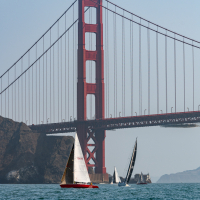 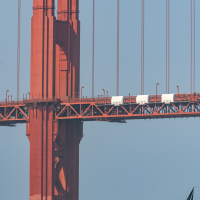 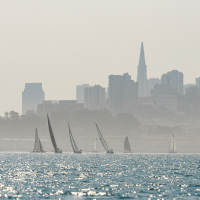 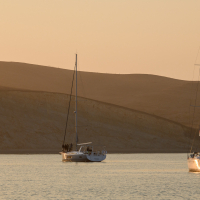 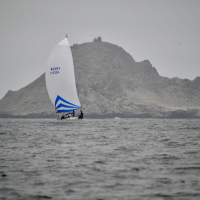 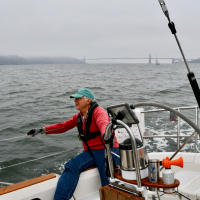 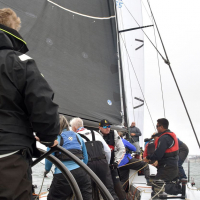 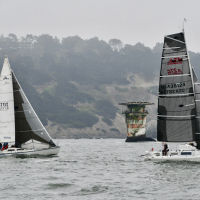 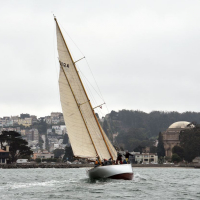 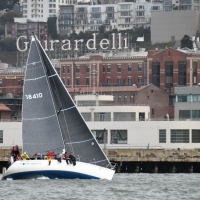 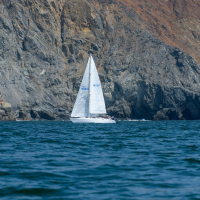 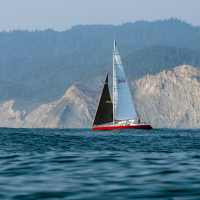 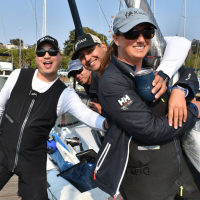 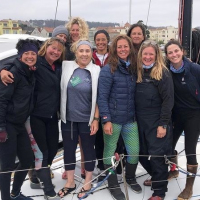 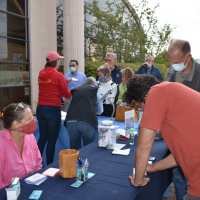 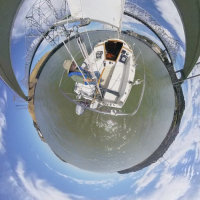 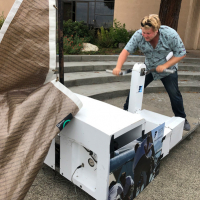 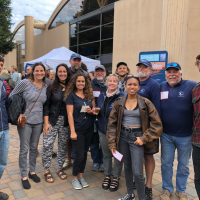 Lauren Moody took this clip of a baby great white shark, swimmng around Travis Marina, from her 1978 Islander Freeport 36, Intrepid.

SHARE ON Tweet Share Email Linkedln
2 Comments
Receive emails when 'Lectronic Latitude is updated. SUBSCRIBE
'Lectronic Latitude: Monday, Oct 4
Environmental Catastrophe
Sailors, Surfers and Sealife Suffer Another Southern California Oil Spill
Luckily it's not often, but once again toxic waste, this time in the form of oil, is despoiling Southern California beaches, wetlands and waters.
Impressive California 505 Performance
East Coast 5O5 North Americans with West Coast Winners
Mike Martin and Adam Lowry led a strong contingent of West Coast 5O5 sailors to bring home the trophy from the North Americans.
Sponsored Post
Get Latitude 38 Delivered To Your Mailbox!
Here’s a great way to get all the good sailing-news sooner. Subscribe to Latitude 38 and have your copy of the West Coast’s best sailing magazine delivered to your mailbox every month!
When Life Gives You Adventure
Online College or Sailing to Hawaii — Which Would You Do?
"Being alone for that long, on a small boat, and not having anywhere to go; just having the waves and no way to go home seemed pretty miserable."
To the River We Must Go
Cruising Through the Delta, on Land
Just when we thought we'd seen the the last of the sailboats, suddenly there were more.
More 'Lectronics »
Report Listing