The New York Times reports that a pipeline failure has caused up to 126,000 gallons of oil to spill in Southern California near Huntington Beach and Newport Beach. Brad Avery, former executive director of Orange Coast College but now mayor of Newport Beach, was leaving Catalina Island and was about five miles off Huntington Beach when he came in contact with the oil slick.

He was quoted in the Times: “‘We have these beautiful dolphins following along with the boat,’ he said. ‘We had six or seven dolphins. To our dismay, all of a sudden, we were in this big patch of oil. It was very thick,’ he said, describing a consistency that varied from a slight sheen to three-by-three-foot patches of black that looked like tar. ‘The dolphins were swimming through it.

“‘It was sort of a moment where we have this beautiful nature, and then this man-made disaster,’ Mr. Avery said.”

The reported 13-square-mile oil slick has deposited thick tar on the beaches and washed dead birds and fish up onto shore. The failure occurred on Saturday and has reportedly been stopped, so now the long process of cleanup is underway so closed beaches can reopen and sealife above and below the water can begin to recover. By Sunday night the Coast Guard had reported that about 3,150 gallons of oil had been recovered, or less than 3%.

Los Angeles County recently made the decision to phase out urban oil drilling in unincorporated areas, which, over time, will help reduce the size and frequency of spills while the world moves toward less destructive and more sustainable energy sources, such as solar resources and California’s abundant wind, which powers all Southern California sailors.

Oil has been a huge boon for humanity, but it’s time to tack for clear air. There is a tremendous amount of progress being made toward renewable energy, and we’re sure that, for Southern California sailors, swimmers, and sealife, it can’t come soon enough. With Tesla stock valued at over $600bn and Ford and GM each at under $100bn, plus Ford’s recent announcement to invest $11.5bn in US electric car manufacturing facilities, it’s clear that it’s only a matter of time before this type of ecological disaster will exist only in history books. Unfortunately, that time is likely quite a few years and oil spills away.

Over the past few days Sail Newport in Newport, RI, hosted 30 5O5s from 12 states and two countries competing in the 2021 5O5 North Americans. In the end, the always-strong California 5O5 sailing fleet put in another impressive performance, with the Bay Area’s Mike Martin and Adam Lowry, who are also the current world champions, taking the top spot. Mike Holt and Carl Smit from Santa Cruz took second, and Nic Baird and Eric Anderson (Redwood City) took fourth, with Howie Hamlin and Jeff Nelson from Southern California taking fifth.

Newport showed off sunshine, breeze and a full spectrum of sparkling conditions. Photo/videographer Ty Baird caught some great drone action in the video below.

It was tight racing for the top two positions when, after Friday’s racing, in a classic high-teens southwesterly with enormous ground swell from an offshore storm, Holt and Smit took the day with a 2-1-1 to Martin/Lowry’s 1-4-2 and moved to within two points for the overall lead. The weekend continued with good breezes and challenging conditions. The racing remained tight, but the Martin/Lowry duo ended up on top, finishing with two bullets.

The California 5O5 sailors push each other with practice racing when they’re back home, and it shows whenever they’re on the road. To see the full results click here. 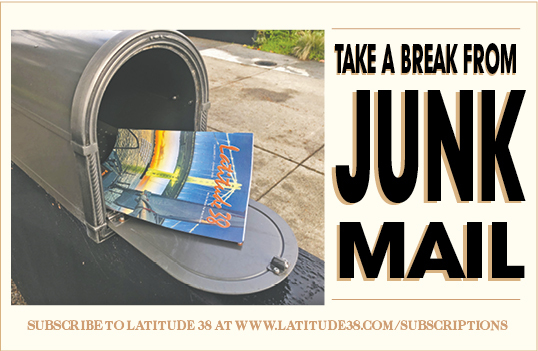 Here’s a great way to get all the good sailing-news sooner. Subscribe to Latitude 38 and have your copy of the West Coast’s best sailing magazine delivered to your mailbox every month!

In spring this year, we shared the story of a couple of 19-year-old college students who took off from the mainland and sailed to Hawaii aboard a 1964 Cascade 29. In October’s Latitude 38 we bring you the whole story — the why, the how, and what it meant to the young sailors who, initially, had little to no offshore sailing experience. You’ll also learn how their boat, Osprey, became Drifty One.

In 2020, Bella Siegrist and Tyler Savage were completing high school and planning to attend college in Bend, Oregon, when suddenly, the world shut down due to COVID-19. Their options were to attend online classes from their home in San Diego or to wait out the pandemic and find something else to do in the meantime.

“It was actually kind of Bella’s idea to sail to Hawaii,” Tyler said.

“I grew up in Hawaii. I think I was missing my friends that day,” Bella explained. “Only a small percent of me actually wanted to do it. But then Ty took that idea and was going crazy with it.”

Tyler did what all young sailors would do — he typed YouTube into his computer search bar and looked for videos of people sailing to Hawaii. There he found Sam Holmes, who had spent nearly 30 days sailing a 23-ft Ranger across the Pacific.

“During the video I had absolutely no intention of actually doing it. Being alone for that long, on a small boat, and not having anywhere to go; just having the waves and no way to go home seemed pretty miserable. But then when he actually arrived, and walked on dry land, it looked like such a great feeling and such a great accomplishment. And it just made Bella and me wonder, how could that change us?”

The couple had no ocean sailing experience, and next to no money. But through patience, persistence and a lot of hard work, they set off from San Diego on May 15, 2021, and spent the next 21 days sailing across the Pacific. By the time they reached Hawaii, Tyler and Bella had gained a boatload of life-changing experiences. They had both intended to enroll in college on the island, but as life will happen, neither has commenced college this fall. Bella took a job as a personal trainer, while Tyler started working on charter boats. Tyler has now completed his 25-ton skipper’s license and at last word was waiting for the paperwork to be processed.

Read the full story at Latitude38.com.

What do you do when the summer is almost over, and you still haven’t got your sailboat ready to the point at which you can get off the dock and go sailing up the Delta? We’re sure we’re not the only sailors who have had to deal with this, but back in March, when the Delta Doo Dah registrations opened, we thought, “Of course we’ll be ready. Let’s do it!” April, May and June went by, as did July, August, and now September. And while we’re closer to completion than we were, we’re still landbound for now. So on Sunday we decided that by hook or by crook, we were heading up the Delta.

One of the first things we noticed, apart from the hazy sky — presumably from wildfires — was the warmth. Despite the Bay Area’s promising summer-style temperatures right now, it was nice to get out of the cooler air and feel the sun’s heat on our bodies. Next, the landscapes quickly flattened out and broadened to present acres upon acres of fields of corn, grapes, fruit trees, and cows. And then came the waterways.

After turning off Highway 4 and onto 160, we encountered our first bridge, the likes of which we hadn’t seen since motorcycling through Alaska. After crossing through Sherman Island we were treated to views of the Sacramento River as we continued north(-ish).

Our first stop was in Rio Vista. We found our way to the waterfront, where we found a picturesque view of the river from the western side.

Just up the road is the Delta Marina. While in this particular marina sailboats were outnumbered by powerboats, we still found it to be a quaint and rather relaxing location.

Our next stop was Owl Harbor, a marina that has been on our ‘must-visit’ list for some time. And we were not disappointed. The first thing we noticed when we stepped out of the car was the silence, and the birds.

The Delta’s waterways are also a place where, as locals put it, sailboats come to die. We saw dozens of seemingly abandoned boats, sail and power, and it again raises the question: Why?

Overall we found the Delta to be a peaceful, relaxing and very attractive region. The miles upon miles of waterways upon which to sail or motor along gently were appealing. And just when we thought we’d seen the the last of the sailboats, suddenly there were more.

Although we experienced on only a small part of the Delta region, if we achieved nothing else, our explorations have spurred us on to finish the work on our own boat, so we too can enjoy the lazy life of the Sacramento and San Joaquin rivers.

SHARE ON Tweet Share Email
4 Comments
Receive emails when 'Lectronic Latitude is updated. SUBSCRIBE
'Lectronic Latitude: Friday, Oct 1
Falling for the Newest Edition
October Issue of Latitude 38 Out Today!
Join us for October's 'Latitude 38' in which sailors adjust their sails, whether because of the weather, or due to unforeseeable circumstances.
On the Inside Looking Out
Saildrone Captures Footage from Inside the Eye of the Hurricane
Saildrone's USV has been capturing footage from inside the eye of Hurricane Sam, currently situated off the USA's East Coast.
Sponsored Post
Westwind Boat Detailing Offers Washing, Waxing and Varnishing
Washing, waxing, varnishing. “Everything looks great! It was a huge relief."
Local Sailing Gems
Suisun City Marina Welcomes Back Sailors, and Latitude 38
If you're looking for new places to visit, and you've never been to this corner of California, check it out.
Prepare to Cast Off for Mexico
Seminars for Southbound Cruisers in San Diego
Downwind Marine on Cañon Street near Shelter Island in San Diego will help cruisers prepare to cast off for Mexico with a series of educational seminars.
More 'Lectronics »
Report Listing