This is a challenge for Latitude 38 readers who think they know all the classic wooden boats built and sailed on the West Coast. There are just a few clues. We got an email from Bobby Popoff of Vancouver, BC, who’s hoping we can help him find a long-lost love, the sailig vessel Spirit. So of course, we’re turning to Latitude Nation for help.

Bobby wrote, “I’m searching for SV Spirit, which was a 66-ft modified Monk design that Harold A. Jones, owner of Vancouver Tug (now called SeaSpan), had built at his shipyard at the foot of Pemberton in North Vancouver. Spirit was tied up at Blaine Harbor during the ’80s and was a flagship for the Royal Vancouver Yacht Club when Harold Jones was commodore.

“Beverly Jones and Norman Robert McCarvill acquired and raced the Spirit for a while. I was aboard the Spirit in the ’80s in Blaine Washington Harbor when she was owned by Barry Oliver.”

“If anyone knows what or where the Spirit is now I’d appreciate it if they could let me know.”

Latitude Nation, you always come through with the answers; we’re relying on you. If you have any idea where Spirit might be, you can reach Bobby at (604) 809-8697 or email bptrainrobber@gmail.com.

In October 2013, the Bay Area’s newest tall ship, the Matthew Turner, had her keel set. Thus began a seven-year-long build that was largely fueled by volunteers who, according to the Call of the Sea website, put in an impressive 150,000 hours of work. This is a perfect example of the well-known phrase, “Many hands make light work.” In this case, the word “hands” is replaced with “volunteers.” It is also testimony to the Bay Area’s commitment to its community and to its maritime heritage. This spirit of community now has a new volunteer outlet with Spaulding Marine Center’s latest news — the organization’s innovative marine-technician apprenticeship program, Boatworks 101, has been granted California Division of Apprenticeship Standards (DAS) accreditation.

In its recent press release, Spaulding Marine Center outlined some of the areas in which volunteers will be instrumental in helping to deliver the DAS-approved program — electricians, diesel mechanics, riggers, carpenters, composites experts, and other specialists throughout the industry. While the aforementioned volunteers will be involved when the apprenticeships commence in the fall, Spaulding is also hoping to engage volunteers for their current venture, The Pelican Project.

“We’re building six Pelicans, which we’ll use for our youth sailing education programs and (that) will also be used by Sausalito Community Boating Center,” education director Jay Grant said. “There are a lot of people in the Bay Area who like to get involved with community projects, and we’re hoping some of these people will come aboard to help with the build.

“Duckworks Boat Builders Supply in Washington have already donated the plans, and we’re hoping to get some or all of the materials donated, and have a team of volunteers help us build the boats.

“They’re not anywhere near as big as Matthew Turner, but hopefully we can benefit from some experienced help.”

There’s no doubt that volunteers play a big part in the Bay Area, with most of the nonprofit organizations benefiting from their support. Call of the Sea, San Francisco’s Sailing Science Center, Sausalito Community Boating Center at Cass Gidley Marina — these are just a few of the organizations that, along with Spaulding Marine Center, appreciate the many hours contributed by volunteers.

If you’re able to, and would like to get onboard The Pelican Project, email Spaulding at education@spauldingcenter.org. 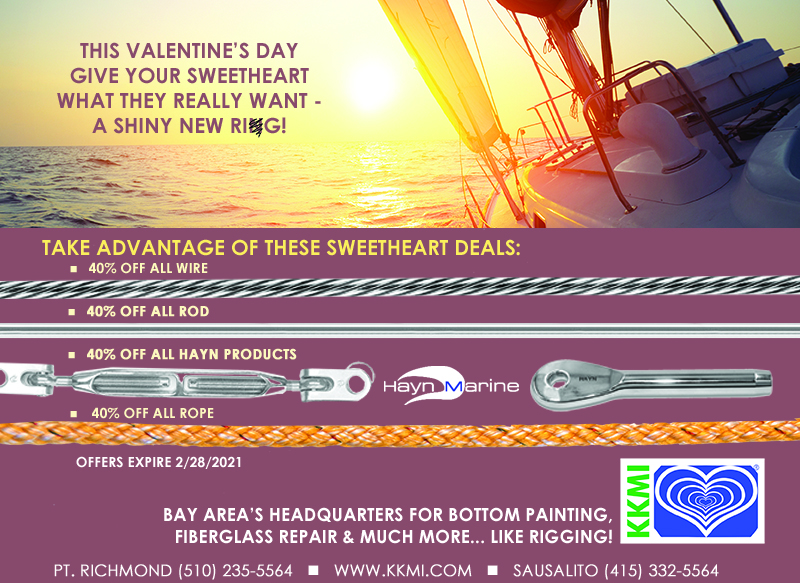 Enjoy these Sweetheart deals on rigging. Call us to book your project today!

In the February issue of Latitude 38, we profiled the sailor, retired sailmaker and not-retired-yet artist Jim DeWitt. Jim’s wife, Sallie, and daughter, Pam, had sent us so many images of his paintings that we didn’t have room for them all on the printed pages. So we’re sharing more of them from the past decade or so here.

In addition to boats, Jim paints cars, horses, kids, dogs and portraits. “Portraits are one of my favorite things to paint,” he says.

Corinthian Yacht Club (the one in Tiburon) says they’re “slowly creeping back!” They invite racers to “Gear up for Valentine’s Day with a vaguely heart-shaped pursuit race.” The entry fee is just $20. CYC will follow that up with their regularly scheduled Midwinters on February 20-21. They added March 6-7 as the second weekend to complete the four-race series. “With the variable winds of winter, the race has been called ‘Jungle Ball for Boats’.”

A later message from CYC notes: “We are intending to schedule one or more of the midwinter races as pursuit as well, likely Sundays. This will be spelled out in the Sailing Instructions.” Missing from these events are the big raft-ups in the harbor (due to health orders, CYC is currently limiting berthing to members only) and shoreside parties.

In accordance with the health orders of Alameda County, Berkeley YC is allowing the following in this weekend’s Midwinter races: “The maximum number of crew on each crewed boat (both racer and race committee) may be from no more than three households. Doublehanded crews from separate households are OK.” This will be the last weekend of regular racing in the series, but top finishers will have a chance to compete in the Champion of Champions on Sunday, February 28.

The Regatta PRO Winter One Design Invitational moved their first warning from 11:30 to 11 a.m. on Saturday, February 13, in hopes of pulling off three races on February 13 and March 13, weather permitting. RegattaPRO had to forego their planned races in December and January. J/105, J/88, J/24, J/70, Melges 24 and Moore 24 fleets are racing in the series.

The good news from the Singlehanded Sailing Society: The next race in the season will allow doublehanders. The bad news: The SSS limited registration to 150 boats. They opened registration on Saturday morning and completely filled all spaces on Sunday. Unlike for the Three Bridge Fiasco, there is no waiting list. The race on February 27 is called the Corinthian, but CYC can’t allow a race committee of non-members at the club. So, the race will start and finish out in front of the Golden Gate YC on the San Francisco Cityfront. The rest of the course will remain the same, involving roundings of Blackaller Buoy, Southampton, Little Harding and Blossom Rock.

Looking Ahead to Spring

Newport Ocean Sailing Association’s Newport to Ensenada Race will start off the Balboa Pier on April 23. Race organizers at NOSA are planning for a traditional Ensenada finish. But they do have a backup plan to go to San Diego instead, should that be necessary. That course would send competitors around the Coronado Islands. In preparation for the race, NOSA will hold Racing and Winning at Night seminars on February 25 and March 25.

“It’s taken some rework of the logistics because of the Canadian border closing and the cancellation of this year’s Swiftsure,” writes Dennis Damore, the commodore of the Corinthian Yacht Club of Portland, “but CYC and our title sponsor Schooner Creek Boat Works were determined to make this year’s race happen.” The Pacific NW Offshore is scheduled for “June 10-13, to allow for more time for COVID recovery. To register follow this link: Pacific NW Offshore Registration.” This 193-mile race begins off the mouth of the Columbia River and finishes in the bay at Port Angeles, Washington.

Registration is now open for the 2021 Singlehanded Transpacific Yacht Race from San Francisco Bay to Hanalei Bay, Kauai. “We are planning the race, but COVID is of course complicating the situation,” wrote race chair Brian Boshma on the SSS forum. “We will make a final call on the race on March 15. The usual events that happen at the start and finish will be modulated by COVID.” The race normally starts at CYC, and CYC hosts the fleet for a couple of days in advance.

“If we are lucky, everyone will be vaccinated and we can have a normal start, finish and celebrations at both ends,” continued Brian. “A big question for all those seriously considering the race is as follows: If Kauai’s ‘resort specific bubble’ is still in place, and they can’t assure it will be lifted by June 19, the start date, would we get sufficient participation to make the race viable? Would you still have an interest if your friends and loved ones would have to spend 10 days in a designated resort prior to being allowed general island access?” Another possibility is a finish on a different island in Hawaii, such as Oahu, where a negative COVID test is sufficient to allow travelers entry. Follow the discussion on the forum here.

Race organizers at the Transpacific YC have extended the deadline for standard entry fee payment for July’s Transpac race from Los Angeles to Honolulu. The new deadline to avoid a late fee is April 30, 2021. World-class navigator Peter Isler will offer a special course in his Marine Weather University, Preparing for Transpac: Navigation, Strategy, Weather, Electronics and More, on Saturday, February 20, from 9 a.m. to 12:30 p.m. Pacific Time.

Registration is already open for the 2022 Vic-Maui Race. That’s still a long time off, but here’s something you can do this very month: The Virtual Vancouver International Boat Show runs February 24-27 and offers free registration. Seminars of interest to potential Vic-Maui racers (and other offshore sailors) include:

SHARE ON Tweet Share Email
1 Comment
Receive emails when 'Lectronic Latitude is updated. SUBSCRIBE
'Lectronic Latitude: Friday, Feb 5
Changing Plans
Ticket to Ride: Frank and Mary Grace Stitch Head West to Hawaii
Sailing to Hawaii was not even Plan B for Frank and Mary Grace Stitch when they took possession of their new HH55 catamaran, Ticket to Ride.
The Resourceful Sailor Series
Keep the Stern Light in Sight
It came to my attention that the pushpit mounted propane tank obstructed the stern light's visibility. I decided a redesign was in order.
Sponsored Post
Discover San Francisco Bay Destinations by Sail with Modern Sailing
Join Modern Sailing's 3-part webinar series to help you prepare for destination day sails and multi-day cruising in the Bay Area.
Sailing's Characters
Was Popeye the Sailor Man Based on a Real Person?
Do you remember Popeye the Sailor Man comic strips and cartoons? In recent months we've noticed a circulating Facebook post that says Popeye was based on a real person.
He was an actor too
Eight Bells for Solo Sailor Hal Holbrook
Hal Holbrook's obituary in the New York Times didn't mention that Hal did the SSS race to Kauai in 1980.
More 'Lectronics »