Volunteers from the San Francisco Science Sailing Center (SFSSC) tackled a coastline cleanup on the north side of Treasure Island’s Clipper Cove last Sunday. Over the span of two hours the crew amassed a wide range of debris — from plastic wrappers, water bottles, Styrofoam containers and discarded metal pieces to fishing line and cigarette butts.

SFSSC president and founder Jim Hancock said, “We filled two dozen bags’ worth of trash that we removed from a 100-yard stretch of shoreline to the west of the Treasure Island Sailing Center, plus another 50-yard stretch to the east.

“While the tie-in with sailing science may seem oblique, one of the major motivations for the Sailing Science Center is to expose people to the marine environment, and cultivate ways for them to strengthen a sense of stewardship for the ocean. As Treasure Island continues to develop, it attracts many visitors, not all of whom show equal care for the environment.”

Volunteer Alex François added, “Spending a few hours combing through the shores of Clipper Cove was an eye-opener in seeing how much litter is left behind. Unfortunately, much of it gets trapped in the coastline’s rocks, and some is pulled into the water by the tides. We can do better.”

The San Francisco Science Sailing Center is a nonprofit comprising enthusiastic individuals who share a passion for sailing, science and the environment. This was the organization’s first coastal cleanup day. Additional litter removal sessions are being planned for 2021.

Visit the SFSSC webpage to learn more about their valuable work and programs.

This photo was taken 10 or 15 years ago, at Paradise Village Marina in Nuevo Vallarta.

Back in the day, John used to race his Bob Perry-designed 52-ft cat, the name of which I can’t remember, against my Profligate, and Dave and Kim once or twice raced their Catana 42 Maluhia.

That was some of the most fun racing I’ve ever done in my life! Perfect tropical conditions and friendly competition.

But after John and I had done a bunch of Banderas Bay Regattas, we decided we needed a change of pace. Variety being the spice of life and all.

So I challenged John to meet me eight months later in 3,500-mile-distant St. Barth, for the New Year’s Around the Island Regatta.

Surprise, surprise, we both showed up! Did the Sint Maarten Heineken Regatta, too.

John later moved to Colombia, where he has photo evidence of getting his cat sailing at 28 knots. Mind you, not that he wanted to go that fast.

So where is everyone today?

A couple of years ago Dave and Kim took off cruising to the South Pacific. For reasons I’ll let them explain, not long ago they ended up buying a Burundi 47 cat in Grenada’s Windward Islands, where they have since been living out the COVID-19 mess in style. Their new-to-them cat has tillers, for God’s sake.

About 10 years ago, John sold his 52′ and bought a day cat. But at age 74, he got the big-cat bug again and bought a hurricane-damaged Catana 52. Damaged in the sense that the carbon mast he was hoping to repair was broken in two places, the boat needed new engines, and there was a bunch of glass work to be done.

A tip of the hat to John, but the last thing I ever want to be doing at that age is trying to put a hurricane-damaged cat back together. But John likes projects that involve reviving stuff from the dead, such as San Diego real estate after the crash. He’s made good money doing it, too.

Anyway, there’s a good chance that John, Dave, the ever-lovely Kim and I will be reunited on cats sometime soon in St. Barth, all of us with cats we didn’t have in Mexico.

The moral of the story? If you go cruising in Mexico, you’d better be careful, because you might still be cruising 20 years from now. 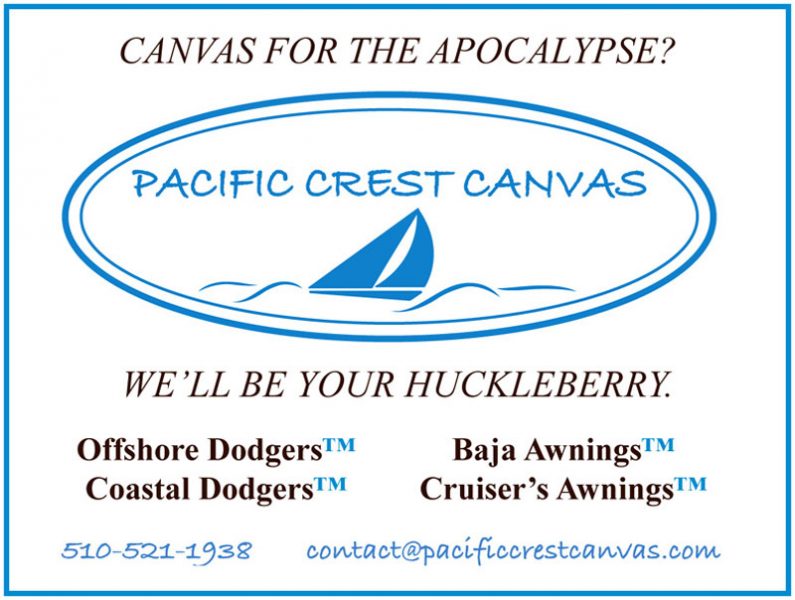 What to do when you’re not sailing on the ocean or organizing the Pacific Cup so other people can sail on the ocean? For offshore racer Michael Moradzadeh, the answer is to help build a new website for the Cruising Club of America — to serve its members, who are “a collection of passionate, seriously accomplished ocean sailors making adventurous use of the sea.”

The October issue of Latitude 38, coming out tomorrow, tells of Michael’s eight prior Pacific Cups and his 2019 victory in the Transpac aboard his Santa Cruz 50 Oaxaca. Michael also described for us the building and launching of the CCA website, just ahead of starting the 2019 Transpac.

“Working alone, I could have done pretty good,” he says of the website, despite the additional challenge of constructing components that enable far-flung members to conduct club business securely. But encouraged by club leaders, Michael engaged an outside consultant “to do a lot of the heavy lifting and fine points of website transition. With the help of people with the necessary skills,” he says, “we were able to get an extra, several-percent improvement.”

Whether racing or building a website, Michael says, “It’s necessary to accept the input and judgment of somebody else and allow that individual to guide your activities. Despite having the nominal final say, you really want to consider when and whether to exercise that. It’s often wisest to defer to their expertise and allow those dedicating themselves to the job to have their effort respected.”

More challenges lie ahead, of course. As CCA Vice Commodore Chris Otorowski says, “Like most websites, there are things that could be improved at any given time, and Michael, as well as setting up the current website, has been continually updating and making it more user-friendly. And I think we know that there is much more potential in using the website that is untapped.”

Pick up the October issue to get ‘the rest of the story.’

As detailed in Monday’s ‘Lectronic, the YRA and Vallejo Yacht Club canceled the 2020 Great Vallejo Race. But that doesn’t mean there’s no racing. Au contraire!

This weekend, Berkeley YC offers the S.I.P. Escape — a Make-Up Race on Saturday, October 3. BYC is offering divisions for singlehanders, doublehanders, household/social bubble crews, and spinnaker and non-spinnaker boats. Then, BYC plans to start running their casual Sunday Chowder Series on October 11, continuing on most Sundays through March.

Also on October 3, Sequoia YC will host their Moonlight Marathon. The 37-mile race will start in Redwood City in the late afternoon, round Treasure Island, and finish under the light of a nearly full Harvest Moon. “It’s a semi-pursuit style race, with start times aimed to get everyone to the top of Treasure Island at the same time,” explains race chair Tom Borgstrom. Another race on the same evening taking advantage of the just-past full moon will be San Francisco YC’s Midnight Moonlight Maritime Marathon. A pursuit race, this one starts in the afternoon in Raccoon Strait and rounds the central pier of the Carquinez Bridge as its turning mark.

Richmond YC will host the Multihull Invitational, a two-day event this weekend. Because non-RYC members will be participating, the regatta will be staged out of the Marina Bay Yacht Harbor and sailed on the waters off Brooks Island. There will be no gathering at RYC. Also a two-day event, the Mercury Class Pacific Coast Championship will be contested at Los Angeles YC in San Pedro this weekend.

On October 10, Encinal YC will run the YRA Doublehanded Encinal Race, with a course from west of the Berkeley Pier to Point Bonita, then back inside the Bay past the Bay Bridge to a finish near the entrance to the Estuary (away from Port of Oakland shipping). In case of rough conditions west of the Golden Gate, the race committee can choose an alternative in-the-Bay course.

That Sunday, the 11th, EYC will join forces with Island and Oakland YCs to offer the Estuary Extravaganza. Divisions are offered for singlehanded, doublehanded, fully crewed and one-design boats. Registration closes tonight. As of Tuesday night, 63 boats had already signed up! Sequoia YC’s Quarantine Cup Series will conclude on October 11.

It’s back to RYC again for October 17’s Mercury Fall Invitational. Oakland YC’s Oktoberfest will move to the Estuary this year, on the 17th.

With the Vallejo YC closed and unable to host visiting regattas, the Singlehanded Sailing Society is looking at alternatives for the Vallejo 1-2 (could it be a Benicia 1-2 this year?) on October 17-18. So far, the SSS has managed to get in every race they’d planned — with the notable exception of the Singlehanded Transpacific Yacht Race, which they moved to 2021. The usual idea is to race up singlehanded on Saturday and return doublehanded on Sunday.

What would October be without the Great Pumpkin Regatta? Weird and creepy, that’s what. So RYC has adapted the event for the pandemic. There will be one race day — Saturday, October 24 — instead of two, and no party. It will be a pursuit race with an on-the-water-as-you-finish trophy presentation. “We’re still working out the details of costumes, pumpkin dropping and trick-or-treating,” says the club that was “built for fun.”

Tiburon YC has been managing some racing in these trying times. Their Halloween-themed Red Rock Regatta is on the schedule for Saturday the 31st.

November will kick off on Sunday the 1st with RYC‘s fourth Amazing Grace Cheney Regatta, in a pursuit-race format with another on-the-water trophy presentation.

In between November 1 and today, a new kind of event will span the entire month of October. It’s not a race in the usual sense of the word, but a challenge nonetheless. The Farallones Lunar Challenge invites you to sail around the Farallones as many times as you can in one lunar cycle, October 1-31. Email your proof to [email protected]. (By the way, Thursday, October 1, is the full Harvest Moon and Saturday, October 31, is the blue Hunter’s Moon — on Halloween no less!)

Tomorrow, October 1, is also the day the next issue of Latitude 38 will come out. Within its pages you’ll find Calendar, listing many more worthy races and maritime events than we have room for here. We’ll update the online version of Calendar tomorrow too.

SHARE ON Tweet Share Email Linkedln
Leave a comment
Receive emails when 'Lectronic Latitude is updated. SUBSCRIBE
'Lectronic Latitude: Monday, Sep 28
Race Schedule News Flash
The 2020 Great Vallejo Race Is Canceled
The chairman of Vallejo Yacht Club's board of directors, called us last week. "The city has us closed down. We can't welcome people right now."
Diminutive Sailboat Off to Hawaii
Wil Spaul and ‘Chubby Girl’ Head Out the Gate
Mitch and Quncy Andrus were out enjoying the Bay this past weekend aboard their Kelly Peterson 46 Esprit when they happened across Wil Spaul leaving for Hawaii aboard his 9-ft sailboat, Chubby Girl.
Sponsored Post
Handcrafted Custom Designs by Pacific Crest Canvas
Dodgers, biminis, and covers of every kind. Centrally located at Grand Marina in Alameda, California, with an easily accessible work berth.
Islands Prepare to Reopen to Cruisers
Are You Making Caribbean Charter Plans?
While travel remains somewhat complicated and confusing, it is not out of the question. The Bahamas are open to US residents, and the BVI, which has been closed, is scheduled to reopen on December 1.
Deliveries Between PNW and San Francisco
Sailing: From There to Here and Back Again
The plan was to make it from Seattle to San Francisco nonstop, in five to seven days, depending on the weather.
More 'Lectronics »
Report Listing