Bob Lockhart, the chairman of Vallejo Yacht Club’s board of directors, called us last week. “The guest docks are torn apart, the galley is being rearranged, and the bar is closed,” he said. “The city has us closed down. We can’t welcome people right now. (Though we won’t turn anyone away in a storm.)” The Yacht Racing Association made the cancellation official on Friday. VYC is looking forward to May 1-2, 2021, the new dates of the 121st Great Vallejo Race.

The Great Vallejo Race had originally been scheduled for April 25-26, avoiding the first weekend of May so that fans of SailGP could attend both. As the pandemic ramped up, the YRA moved the GVR to October 10-11. Back in April, did we even imagine we might still be under COVID constraints in October? Pretty sure the average Joe did not.

Fear not, gentle sailor. You can choose from many, many other worthy and fun races during the month of October. We’ll highlight a sampling of them in Wednesday’s ‘Lectronic Latitude.

Last week we posted a story about Wil Spaul’s upcoming voyage to Hawaii aboard his tiny sailboat. Yesterday he cast off the docklines and headed out the Gate.

Mitch and Quincy Andrus were out enjoying the Bay this past weekend aboard their Kelly Peterson 46 Esprit when they happened across Wil Spaul leaving for Hawaii aboard his 9-ft sailboat, Chubby Girl.

Mitch relayed, “We enjoyed fantastic sailing on Saturday, and a hot motor back to Berkeley early afternoon today. We grabbed a couple photos of Wilbur Spaul and the Chubby Girl. As we motored by he jovially said, ‘I’m headed to Hawaii, two months!’ and held up the peace sign.”

You can listen to Wil Spaul talk about his voyage to Hawaii on Ben Shaw’s Out the Gate, and you can follow Chubby Girl ‘s journey here. 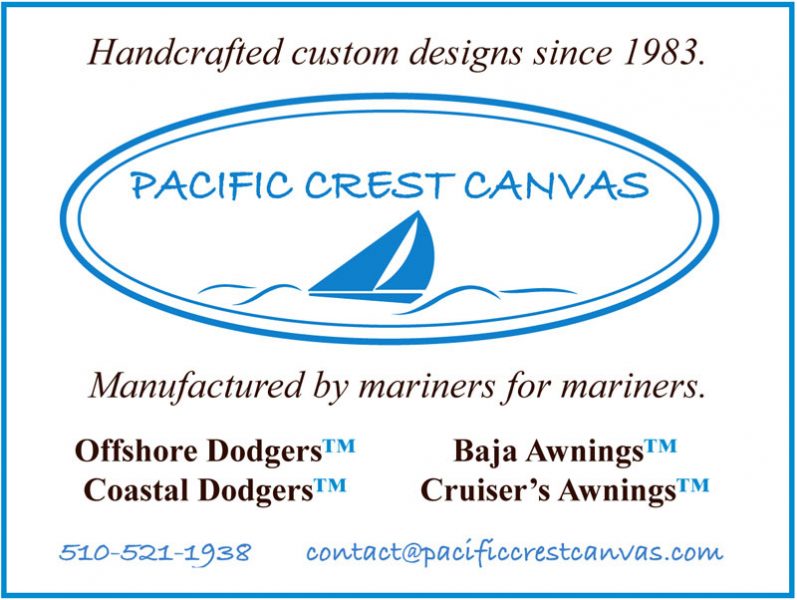 The finest marine canvas and upholstery in the San Francisco Bay Area since 1983.

It’s worth keeping your tropical sailing dreams alive. While travel remains somewhat complicated and confusing, it is not out of the question. The Bahamas are open to US residents, and the BVI, which has been closed, is scheduled to reopen on December 1.

We spoke to Barney Crook of TMM Yacht Charters in the BVI, who is looking forward to welcoming charter guests back to the islands, though the specifics for reopening for businesses and sailors aren’t completely worked out. Like governments everywhere, the BVI is putting in place rules and guidelines under which charter companies will be allowed to operate and travelers will be allowed to return.

This is no different than California, where businesses are reopening, though the rules can change county by county as you travel from Oregon to Mexico. This makes sense as infection rates, and hospital resources and capacity, vary regionally. Fortunately, as the days get shorter and the temperatures start turning cooler, the ability to manage the pandemic is improving. People are traveling, the Nada Ha-Ha has 60 boats signed up to sail south as the Mexico cruising season begins, and many more folks are planning for the Caribbean as it reopens. Though it’s not a time to let down your guard. Because of our high infection rate, the US remains at the top of many countries’ banned-travelers list.

Travel Weekly is putting out a list of current travel conditions for the Caribbean islands, which you can view here. Most islands are requiring pre-arrival testing with paperwork to be shown upon arrival. There are varying quarantine requirements including testing and contact tracing while in the islands.

Among the islands currently open are the Bahamas, Antigua/Barbuda, Dominica, St. Barts, Barbados, St. Vincent and the Grenadines, Grenada, St. Martin and the US Virgin Islands. Among those currently closed to US visitors are Guadeloupe, Montserrat, Martinique, and St. Kitts & Nevis. We recently wrote that Australia and New Zealand are banning cruising boats from entering without prior approval.

While there are certainly more challenges than in the past, much has been learned to allow companies and sailors to connect again for tropical sailing cruises and vacations. If you’ve got plans, let us know in the comment section below or email us at editorial@latitude38.com.

In this month’s magazine we featured a story about sailing between San Francisco and the Pacific Northwest in both directions, and aboard different vessels. USCG-licensed captain, instructor and rigging specialist Andy Schwenk takes readers on two deliveries. First, from Seattle to San Francisco aboard a monohull — then back again, from San Francisco to Anacortes, on a multihull.

In the buying and selling of yachts, it always seems as though the right boat is in the wrong place. With real estate prices being what they are and with COVID-19 travel restrictions, it’s somewhat easier to bring the boat to the buyer, rather than have the buyers relocate to where the vessel is berthed. Besides, who knows what kind of school system they have there and where the nearest Starbucks is?
Enter the delivery skipper. His job is to relocate the vessel in a safe and timely manner for less money than it would cost to transport it by truck or by ship. In some cases, the vessel is simply too large to transport economically and has to travel on her own bottom. These are the boats my mother would like. Her policy was to never travel on a vessel that is shorter than your age.

Seattle to San Francisco on a Monohull

This journey takes us to Seattle. Usually I try to get there a day or two before departure for fueling, grocery shopping and systems checks. Sometimes the owner wants to come along. Sometimes they don’t, and that is why they hire a skipper. In this case we were on a performance-oriented cruiser, the Sabre 426 Second Wind. The crew were the owner and his lovely wife, two fine San Francisco Bay sailing women, and myself as delivery skipper. Some insurance companies require a licensed skipper for offshore voyaging until the owner has enough miles under his keel. The plan was to make it from Seattle to San Francisco nonstop, in five to seven days, depending on the weather.

There are dozens of free websites like PassageWeather and Windy for keeping track of predicted wind and waves. Generally, June-August sliding down the West Coast and watching the thermometer rise is either reaching or running, although not always.

The wind compresses and the velocity increases at the capes, especially Mendocino, but downwind sailing is fun, and if it gets too rambunctious, simply stow the main and run with the jib on a stick — a rolled-up headsail on a whisker pole — and away you go.

Interestingly, this boat did not have a pole of any kind. We actually ran wing and wing sometimes, and the pole certainly moved up the priority list after the sailmaker delivered a repair estimate for the UV cover, which took a beating from the headsail’s collapsing as the vessel rolled down the waves.

Please follow the link to September’s Latitude 38 to continue reading.

SHARE ON Tweet Share Email
Leave a comment
Receive emails when 'Lectronic Latitude is updated. SUBSCRIBE
'Lectronic Latitude: Friday, Sep 25
Plan Ahead for South Pacific Cyclone Season
Australia and New Zealand Say No to Cruisers
Since the early days of global COVID restrictions, the Ocean Cruising Club (OCC) has been appealing to Australian (AUS) and New Zealand (NZ) authorities to secure safe harbors for cruisers during the South Pacific's 2020/21 cyclone season.
The Long Slow Road
BCDC Reform Bill Goes to Governor Newsom’s Desk
Assembly Bill 2809 is being called a "first step" in reforming the BCDC, which has "consistently struggled to perform key responsibilities related to enforcement and has therefore allowed ongoing harm to the Bay,”
Sponsored Post
Job Opportunities in KKMI’s Parts Department
KKMI is looking for a boating person with a proclivity for sourcing parts. We have both Full and Part time positions available.
New Season of Yacht Races
The Long and Short of the Corinthian Yacht Club Fall Series
With normal summer and fall racing suspended due to the COVID-19 pandemic, the Corinthian Yacht Club designed a new Fall Series.
A Paw-footed Crew Heads Offshore
Cats on Tris
Who said cats can't be crew? Ships' mate Ollie, the Bengal cat, is sailing in the BAMA COVID Cup Challenge aboard a Corsair 760 trimaran.
Mike's Consignment
Mike’s Consignment Marine Supply in Ventura
We will display your item(s) in our store and on our website and eliminate the need for you to meet strangers at your home or place of work.
More 'Lectronics »