Back in June we ran a couple of stories about GPS ‘spoofing’  — a series of incidents in which AIS was showing boats circling off Pt. Reyes, while the vessels themselves were actually hundreds of miles away. Some theorized that hackers were somehow spoofing the GPS system to intercept signals and digitally move the ships’ locations. Now The New Yorker has come out with a more in-depth article that confirms this. At some point, it could, and maybe already has, become a major headache for the Department of Defense, Google, Apple, Uber, autonomous vehicles and sailors. However, not all face equal threats.

We asked Stan Honey how concerned sailors should be. He replied, “To spoof a GPS, a spoofer needs to be within line of sight of the vessel to be spoofed, and transmit signals that are stronger than the real GPS signals. The second part is easy because GPS signals are weak, but the first part is tough unless the spoofer is just trying to spoof GPS receivers in a small area, like near Putin. So, for oceanic cruisers, it is very unlikely for them to be spoofed when on the high seas. When they approach harbors it is possible, but ideally, by then, they would have alternate sources of navigation information like bearings on landmarks. It continues to be good seamanship to not rely on GPS alone when near land, and take and plot bearings on landmarks from time to time.”

Stan and Sally are now cruising the occasionally foggy coast of Maine aboard their Cal 40 Illusion. Stan said they’re “in Northeast Harbor now, headed to Winter Harbor tomorrow, still on our way east.” Likely with both chart and GPS.

We were recently reminded of a movie about the Griffiths, who are on the Latitude 38 West Coast Circumnavigators List after circumnavigating back in the ’60s and ’70s. It was a whole different era of cruising. They circumnavigated three times on two different 52-ft boats named Awahnee between 1959 and 1978.

Bob Griffith sailed into Honolulu Harbor in 1960 and met fellow iconoclast Nancy Hirsch. From that moment they were wedded to the sea. Steering their 52-ft cutter Awahnee to places no small boat had been before, they spent decades navigating the relentless pull of family and adventure. Following Seas combines recent interviews with exquisitely textured archival 16-millimeter film shot by Nancy on location from Antarctica to Polynesia, in the 1960s and 1970s. It’s not only a story of world records and sailing feats, but of a family who truly lived a self-determined life and made the sacrifices their dream demanded. 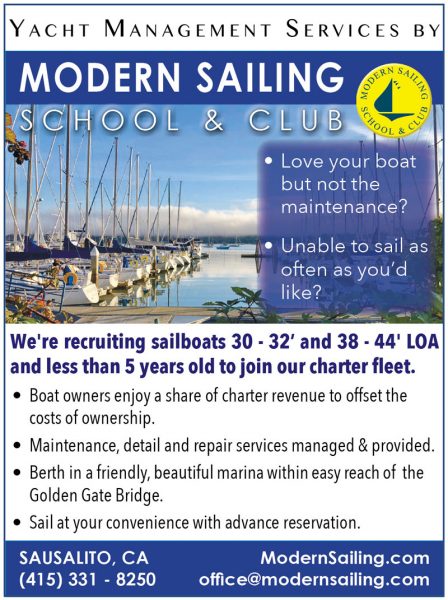 Love the idea of boat ownership, but not the maintenance? Unable to sail as often as you’d like?

Many of us have either fallen into or carefully sought out a fleet of racing boats that has those magic ingredients: fun boating experience, talented fleet members, competitive on-course racing, and off-the-water camaraderie. This is a profile of a young man who found all of this before he was even 10 years old. Ben Brown took his first ride on a Hobie 20 with his grandfather, Rafi Yahalom, on Fresno County’s Huntington Lake in the Sierra Nevada mountain range. Although his memory of the first few sails is fuzzy, those sails began his lifelong interest in the twin-hulled icon, pushing him to compete at the highest levels of the class by the time he was finishing college.

Ben was raised in Los Altos, California, and he’d vacation with his family at Huntington Lake for what sound like sailing vacations. “I’m not sure I have an exact first memory of sailing. I think my grandpa and my mom had been sailing together on Hobie 18s and Hobie 20s since my mom was about 18 years old. So there are some early photos of me at about 5 years old at Huntington Lake — an absolutely beautiful place to sail. My grandpa would take me out on his Hobie 20. We’d go up there usually twice each summer, and that’s basically where I learned to sail.”

Ben didn’t start racing for a few more years. As it turned out, his first race took place when he was 9 years old on a family friend’s Hobie 16, again at Huntington Lake. It was an enjoyable experience that he found “interesting,” and soon after that, he started rounding buoys with his older brother, Nate. But the experience lacked something, and Ben wasn’t enjoying his time on the water as much.

“Eventually, my brother and I got too heavy because, you know, we were both growing boys and the Hobie 16 is pretty weight-sensitive. That’s basically when he kicked me off his boat,” says Ben, laughing.

Read the rest of Ben’s story in Latitude 38. We’ll continue to follow the adventures of the cat sailors with a report from Ben’s mom, Dafna Brown, about last weekend’s Hobie Mile High Regatta on Huntington Lake. Look for her report and photos in Racing Sheet in the September Latitude.

A United Kingdom sailor came up with the ultimate pandemic-lockdown activity — he spent three months building a sailboat, inside his house. “Oh sure,” we hear you thinking, “there are probably lots of people who’ve built model boats to pass the time.” But this isn’t a model boat. Steve Goodchild, built a 16-foot wooden Stornoway that he christened Barnacle.

“I have always done a lot of woodwork and have been a sailor since the age of 4, so I thought I would build a boat,” Goodchild said.

Great plan. But as sailors are apt to do, Goodchild decided to ‘scale up the project’ and, according to Yahoo News, the 73-year-old then had to remove his patio door to move the boat outside.

“I was always good at measurements and I knew I would get it out the door if I stuck with the initial design. I knew a long time ago it was going to be too big and I would take out the door frame.”

Goodchild said that after building the boat, dismantling the doorway was easy.

“It was still a tight fit. I don’t think anyone who saw the build thought I would be able to get it out. But I did.”

By the time the government-imposed lockdown was eased, Barnacle was ready for her maiden voyage.

“It was blowing probably a force 5 or 6, which is a bit much for a sailing dinghy, but I was determined to get it out and so I motioned it out of Paignton Harbour, I put the sails up and it went like a bird.”

While he can’t imagine how many hours he spent building the boat, the retired land surveyor said he worked on it for three and a half years.

How have you spent your lockdown time?

SHARE ON Tweet Share Email Linkedln
Leave a comment
Receive emails when 'Lectronic Latitude is updated. SUBSCRIBE
'Lectronic Latitude: Friday, Aug 7
Sailors Enjoy Mexico Sheltering
Mexico Cruisers Continue to SIP: Shelter in Paradise
We recently received an email from Mike Carran, a California sailor who has spent most of this year sheltering-in-place, in Mexico, or as some of us might say, sheltering-in-paradise
Sailing Snippets
Some of Sailing’s More Unusual Stories
Let no one tell you sailing is boring. Over the past couple of weeks we've come across some stories that show the more unusual sailing — things that go on outside the straight forward cruising, racing and day sailing realm. So we've put together some of our favorite snippets from local waters and afar.
Sponsored Post
Compass Realty – 27 Bellevue Avenue
Expansive water and San Francisco views are the star in the spacious great room, featuring a custom kitchen, dining, sitting, and game area.
Good News for Doublehanded Crews
YRA Racing Returns to San Francisco Bay
The Yacht Racing Association has been hard at work on behalf of clubs and organizations around the area, helping to launch dozens of races. However, they had yet to launch their own YRA races — until now.
AC System or Not
Have You Ever Considered Removing Your AC System?
One of the stories that caught our eye this month's edition of Latitude 38, is Clark Beek's discussion on upgrading your boat's AC system. "My electrical system is built around being out cruising, away from the grid."
More 'Lectronics »
Report Listing