Frigate birds are an oddity among seabirds in that they never go into the water. Indeed, if a frigate does somehow end up in the drink, it will likely drown in short order. Easily ID’ed by their black plumage, forked tails and up-to-7-foot wingspan, frigates feed in one of two ways. One is to fly to within inches of the surface and snatch fish in their hooked beaks. The other — which we almost hate to admit can be quite entertaining to watch — is stealing food from other birds in mid-air. All these traits make them excellent fliers.

Most of the time, anyway.

Rowan and Vikki Fennel (along with daughters Lucy and Emmy) had an encounter with a frigate bird while southbound across the Papagayo wind zone in Nicaragua on their Bay-based Bavaria 46 Taliesin Rose. “We were sailing along at night in beautiful 15-knot beam reach conditions when a large frigate bird attempted to land on our swaying mast — and miscalculated,” remembers Rowan. It slid down the leeward side of the sail and ended up in a heap on deck.

“It tried to take off, but was hindered by lifelines and lashed surfboards . . . so it waddled back to the cockpit coaming, regurgitated a large, nasty fish, and tried again.” Still stymied by lifelines and a dodger in its flight path, it leapt into the cockpit — then hopped down the companionway into the main saloon! A very surprised Vikki sprang into action, expertly casting one of their daughters’ blankets over the monstrous bird – and handing the squirming mass back to Rowan in the cockpit.

“I took the bird to the rail, removed its special cape, and flung it as high into the darkness as possible,” he says. “It flapped once, fell almost to the water, flapped again — and off it went. Whew!”

We’re publishing a feature story on the Fennels’ cruising adventures in next month’s Latitude 38, which is now only a few days away! When you get your edition, flick over to Changes for the full story.

Local musical artists Bay Station Band will perform their annual ‘Love The Bay Music & Sailing’ tour this week, as a virtual event. Almost a decade ago, California-based songwriters/musicians Kwame Copeland and Deborah Crooks combined their love of sailing with their love for music. And together with several musical friends they have created a diverse style of Americana and rock music.

The virtual tour will run Jul 2 – 5 and will feature a series of live streams on YouTube (and Facebook) comprising pre-recorded performances by Bay Area songwriters representing some of their usual ports of call. At least 24 local artists are taking part in the tour with more to be announced.

As with all performances, tipping is appreciated and a tip jar will be available throughout the tour. This year Bay Station Band is donating half of their tips to the NAACP (https:/naacp.org) and The Color of Change (https://colorofchange.org). And of course, artists can also be tipped individually.

Here’s how to join the tour —

Bay Station Band has a long history of live and recorded music. Drawing on their literary and roots tendencies, their songs are imbued with aspects of Americana, blues, jazz, pop, and rock and roll. They’ve released three full-length albums since forming in 2014, performing throughout California and beyond. In 2018, they founded their Love the Bay Music & Sailing video series, which has been featured in BoatUS, Sailing Anarchy and TrafficBeat.

Their music has also been included in several episodes of the PBS show RoadTrip Nation, as well as the video series Sailing La Vagabond. And it airs on radio stations including The Americana Music Show, KALX, WDBX and KAOS.

Take a look at their website for more information: http://www.baystationband.com 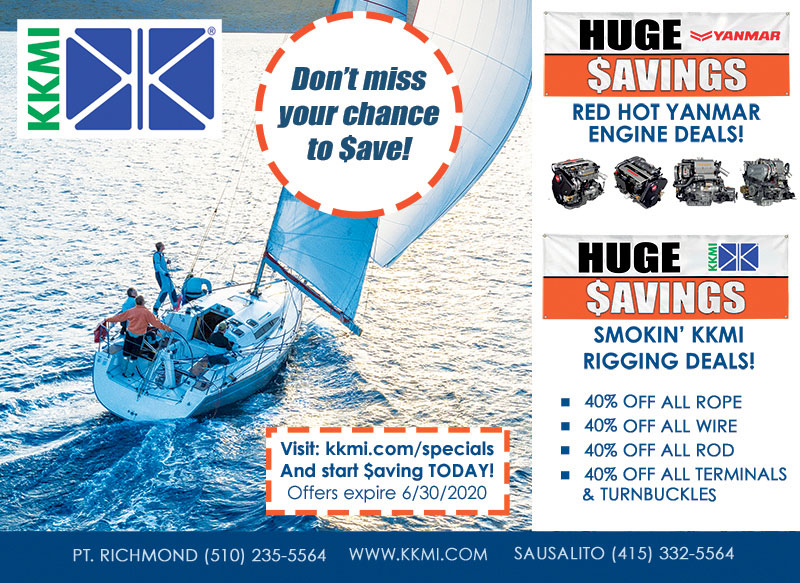 This one is from an apartment complex in San Jose. This is not the first Latitude 37 we’ve seen in 2020 — the other one was on the “antipode.”

Naturally, this got us thinking: What other latitude-themed establishments are out there? Latitude 26 Zapateria in Mexico? Latitude 64 Fermented Shark Bistro in Iceland? Latitude 0 Fresh Coconut Stand on the equator?

Nation — We will take any and all latitude-themed establishments that you might have come across in your international travels. You can either comment below (but can’t post photos), or you can email us here.

During the month of June, a lot of good news crossed the Latitude 38 Racing Desk. First the Richmond and Benicia Yacht Club beer cans started up. Corinthian YC kicked off their Friday night series on the 26th with a non-counter, to help the sailors shake off the long months of sheltering away from the race course.

In a news flash on Thursday, we announced that the Coast Guard has reinstated the blanket race permit for yacht racing in the Bay Area. On Saturday, the Singlehanded Sailing Society was finally able to send solo racers around the Farallones, after having had to postpone twice. Thirty skippers signed up. Twenty-five made it through the drippy fog to the start. (We’ll have more on that race in the August issue of Latitude 38.)

Now to figure out whose races are on, and which organizers are still holding off.

Among a flurry of Fourth of July races, Tiburon YC has canceled the Brothers & Sisters Race. SFYC’s July 4 Fireworks Folly Pursuit Race is still on the books, as are their Hart Nunes Regatta for Mercurys and the Belvedere Classic and Great SF Schooner Race, both scheduled for July 11. (Sorry, after we posted this we received an email that the Hart Nunes has been canceled.)

St. Francis YC is now accepting registrations for the Elvstrom/Zellerbach Regatta for invited dinghy classes on July 18-19. Their evening race series for J/22s on Wednesdays, kiteboarders on Thursday, and windsurfers on Fridays are on the calendar for July.

On Thursday, we received this very welcome message from Tom Borgstrom at Sequoia YC in Redwood City: “Sequoia will be holding its first (and hopefully final!) Quarantine Cup Series, with six weekend races from July 4 through October 11.  Registration will open today on jibeset.net. Anja Bog will be the series Race Captain.

“Sequoia is also excited to announce the return of its Wednesday Night Sunset Series, with 14 races between July 8 and October 7. Registration on jibeset.net will be opened soon. Mark Wommack will be the series Race Captain.

“The race committees intend to offer one or more shorthanded and fully-crewed divisions for each of these series. Note that access to the club will be restricted and no pre-race or post-race events will be held. Both series will be conducted under new rules intended to enable social distancing for limiting the transmission of COVID-19 and to comply with San Mateo County health orders.  Please see each NOR and SIs for more details, as well as the latest San Mateo County Health Orders here.

“One of the new rules will be that all crew must wear a face covering, except when:

To the north, Tahoe YC (in Tahoe City) will run the Trans-Tahoe Regatta on July 11-12. They too are sailing Wednesday night races, and they offer a Monday night series for Lasers. They were to have hosted the Laser Pacific Coast Championships on July 24-26, but that’s been canceled.

Many more fine races are filling the starting gates and rarin’ to go, ears perked for the starting gun. Find more in our Calendar, coming out in the July issue of Latitude 38 on Wednesday, and in the 2020 Northern California Sailing Calendar and YRA Schedule.

Not on the Ocean, but Online

Thanks to efforts by Pacific Cup skipper Rebecca Hinden, the Pac Cup will cross the Pacific after all next month — just not in real life. Instead both erstwhile official entries and everyone else will be able to simulate a sail to Oahu. SailOnline.org will provide the platform for a Virtual Pac Cup. “Guide your race machine in real time from the Golden Gate Bridge to the welcoming arms of Kaneohe Bay,” says the press release. Registration and practice racing are open now, and the ‘race’ itself will start on July 2. Pacific Cup YC will be dishing out prizes in two categories:

PCYC is also offering a series of webinars entitled My Pac Cup. These are more personal stories than how-to seminars. The webinars will be held on the second or fourth Wednesday of each month at 7 p.m. Here’s the July-August line-up:

Returning users and shoppers will notice we have a new look and some great new features. Now when you set up an account or log in, you will be able to view and manage your ads old and new and your payment method, and edit your contact information. Also, we are happy to announce our Run Until Canceled automatic renewal program. You need not worry about missing another deadline. Thirty days after the date of posting a Classy ad, the credit card used for your initial ad submission will be charged automatically. You can cancel at any time by signing in to your account before the next ad deadline — always the 15th at 5 p.m. Pacific Time.

SHARE ON Tweet Share Email Linkedln
3 Comments
Receive emails when 'Lectronic Latitude is updated. SUBSCRIBE
'Lectronic Latitude: Friday, Jun 26
Inverness Yacht Club Approves 2020 Sailing Schedule
As organized sailing schedules slowly resume, Inverness Yacht Club was among the first to approve a 2020 racing season.
Van Ommen Returns to Cape Charles
Jack Is Back!
Last week we received a letter from Jack Van Ommen saying he is back in Cape Charles, VA after a four-month stint in the Caribbean.
Sponsored Post
Berkeley Marina: Gateway to the Golden Gate
Dock with Berkeley Marina and join a community that shares your love of the water. Escape the urban jungle and let the wind take you on your next adventure.
A Fast Romp on the Bay
Islander 36 Summer Sailstice Cruise
Ten family-crewed Islander 36s met under the western span of the Bay Bridge to take a tour of the San Francisco Bay to celebrate Summer Sailstice on June 20.
Freedom Identified
Consensus Reached on ‘Freedom’ Vessel Type
Latitude Nation — Last week we asked if anyone could tell us what vessel type is Freedom; the abandoned boat that was spotted drifting west of San Diego.
More 'Lectronics »
Report Listing