Sailors will no doubt debate the particulars of any given moment of weather, but there was some consensus that the preceding three days of wind, which blew from the north-northwest and was marked by 30-plus-knot gusts, was more characteristic of early spring than early June. There was also consensus — among the crew of East Bay windsurfers, anyway — that Friday, Saturday and Sunday’s blows were more grueling, confounding and frustrating than glorious and awe-inspiring. The wonky conditions didn’t stop anyone from heeding the gale’s siren call, but made some of us question our priorities.

When I arrived at the recently reopened Point Isabel at around 2:30 p.m. on Friday, most windsurfers were just exiting the water. “It’s crazy,” said one regular. “There was either not enough wind and I was ‘slogging’ [sailing below planing speed], or there was way too much wind and I had my hands full . . .” Of course, I had to see for myself. I rigged my 5.0, one of my smallest sails, and had a go. The sea state at the normally docile Point Isabel was utterly appalling, with breaking, crossed-up waves that seemed to come from multiple directions. As reports suggested, I was either way overpowered or barely making headway. This radical ‘shifting of gears’ is exhausting. One must use one’s entire body to adapt, rather than finding any rhythm and flow through the water. I only lasted two runs.

On Saturday, the northern component to the wind activated the Rod and Gun Club, which sits at the western end of the San Rafael/Richmond Bridge. There were seven or eight windsurfers on it and rigging their small sails, even though it didn’t look that windy from shore. I followed the pack, rigged my 4.5, and waded out into the wind line.

The wind was a little more solid than on the previous day, though still a bit streaky, gusty, and instantly energy-depleting. In the puffs, even the 4.5 was too much, to say nothing of the sea state. The waves were so close together that one was obliged to sail over them — chop-hopping from peak to peak — or bash directly into them and send shockwaves through the body.  I managed two more runs, and came in.

On Sunday, I drove past the Rod and Gun Club, and hoped to find more stable conditions at Point Isabel. I arrived at around 4 p.m. to a freshening breeze that was a tad lighter than that of the days prior. I thought I might finally catch some steady conditions, and rigged the 5.2. With the northerly direction, the angle sailing out of Isabel took me past Albany Bulb and directly toward the San Francisco Cityfront, which was blazingly clear and starting to glow in the evening light. But, in keeping with a theme, the sea state was again hideous, and the gusts built and became oppressive the farther into the Bay I sailed (but the peaks of the roiling seas were lit up magnificently by the sinking sun). I was utterly drained and found myself getting frustrated. But after I got back to shore following a handful of runs, I reminded myself that I was missing the point.

The point of sailing, to me, is just to be there, to see the ocean and Bay at their most dynamic moments. ‘Shredding’ or finding flow or getting into the zone are certainly things one aspires to, but that’s all just gravy. The real privilege is just being there.

How was your weekend? Please write us here, or comment below.

This week is World Oceans Week. One of our friends shared this story on social media, and we could not resist passing it along. Here’s a tale where yesterday’s science fiction is today’s science fact, with a group of San Francisco Bay Area tech innovators leading the way.

The eastern Bering Sea is home to vast schools of pollock, the largest commercial fishery in the US by volume, and worth around $1.4 billion. Every year, scientists from the Alaska Fisheries Science Center use research vessels and chartered fishing boats to perform scientific, fisheries-independent surveys, so that they can set quotas for this important industry.

This spring, as the COVID-19 pandemic descended worldwide, it became clear that ship-based surveys would need to be canceled. Instead, the biologists at NOAA Fisheries turned to Saildrone, a group on the leading edge of autonomous, sail-powered robotics.

“Extraordinary times require extraordinary measures,” said project lead Alex De Robertis. “We knew there was a possibility that surveys may be canceled this year, so we worked on a contingency plan to collect some data just in case. We were able to capitalize on our previous experience working closely with Saildrone and NOAA Research’s Pacific Marine Environmental Laboratory (PMEL) to get things off the ground quickly.”

Nine days later, in an impressive display of rapid execution, a fleet of three 23-ft robotic keelboats was launched from Saildrone’s Alameda base. They are on a six-week, autonomous voyage to the eastern Bering Sea, armed with twin-beam CHIRP (Compressed High Intensity Radar Pulse) scanning sonar, powered by solar panels and propelled by 15-ft-tall wingsails.

“Saildrones are designed to be deployed from any dock, sail to any location in the ocean, and complete their data-gathering missions without putting humans at risk. This makes Saildrone technology ideally suited to these tough times,” Saildrone CEO Richard Jenkins told NOAA. “We’re proud to be able to contribute to this important mission.”

In any normal year, teams of scientists would spend weeks together in close quarters onboard their research ships, collecting specimens in their nets so they could gauge weight, length, health and sex of the fish. They would combine this hands-on data collection with images from their scanning sonar to assess the state of the fishing stock. But this is not any normal year.

Instead, three Saildrones are en route at about three and a half to five knots, expected to reach the fishing grounds in early July for a 60-day survey. They’ll cover about the same area as the human-operated survey vessels, working a pattern like the one you see below. The sonar is similar tech to what our bass-boat-loving friends use on the Delta, a scientific version called the Simrad EK80. Its CHIRP draws very low power, while pulling precise and detailed images out of the water column.

All of this just amazes us! We remember when a sonar drew large amounts of amperage and blasted out kilowatts of power, to produce grainy and difficult-to-understand images. The current technology is so energy-efficient that these robotic sailboats, powered by solar and batteries alone, can autonomously roam for up to 12 months. Top speed is listed at eight knots. Saildrones upload data four times per hour to their satellite constellation, with instruments measuring meteorologic and oceanographic conditions.

Here at Latitude 38 we go where the wind blows, but nowadays we don’t need people onboard to do it. We’ll close with a selfie from another drone that’s currently hard at work, the Curiosity Rover. It’s been exploring Earth’s neighbor since 2011, for 2787 “sols” on the mission clock. This inspires us and gives us hope on a Monday. 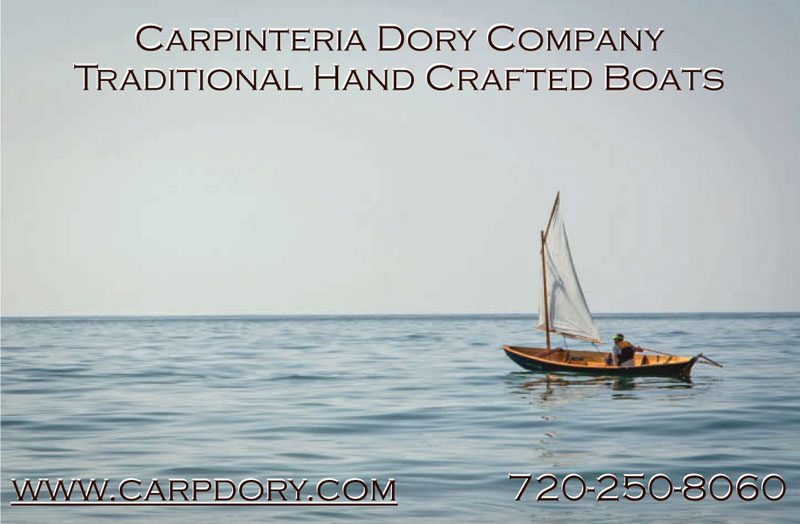 For the person looking to explore the ocean in a low impact way, there is no better boat than the Carpinteria Dory.

This Was Not the Delta Ditch Run

Regular readers and regional racers know that Stockton Sailing Club and Richmond Yacht Club canceled June 6’s Delta Ditch Run. However, someone forgot to tell the social-bubble crews of 10 Moore 24s and a Melges 24, who braved gnarly gusts into the high 30s to sail the course. They must have wondered where the other 100+ boats were. We’ll have more in the July issue of Latitude 38.

The Singlehanded Sailing Society had hoped to pull off the Singlehanded Farallones Race (postponed from May 16) on June 13. However, that plan fell through as the USCG and the counties were unable to reach an agreement. The SSS is still hoping to find a date for the race this summer, and a date for the Round the Rocks Race, with a Bay tour course, canceled in April.

As Tom Burden mentioned in his story on Friday, Richmond YC will kick off their weekly Wednesday night races on June 10. Only RYC member skippers and their household members can sail together. The series is still free, but boats will have to be signed up on Regatta Network, and this is a new practice for what had been a very casual operation. This makes RYC the first Bay Area club to offer ‘official’ beer can racing. However, sailors out of Coyote Point YC in San Mateo had their first unofficial beer can race last Wednesday, with no skippers’ meeting, no post-race gathering, and a rabbit start. (CPYC always uses rabbit starts for their beer cans.) About six boats participated.

Encinal YC canceled their Spring Twilight Series, but they’re optimistic for their summer series, to begin on Friday, July 3. The club, based in Alameda, runs their beer can races on the Oakland-Alameda Estuary.

If you’re sheltering in place this Wednesday, June 10, rather than racing around the cans, you might like to check out a Zoom presentation by the Sausalito Yacht Club Speaker Series at 6 p.m. They’ll feature Tony Johnson, a circumnavigator, author, songwriter, drummer, philosopher and explorer. The publicity for the event promises “tales of gales, groundings, pirates and a near sinking.” If you’re interested, email GM@sausalitoyachtclub.org to request access.

The latest J/Newsletter alerts us to the cancellations of the 2020:

The fact that the Singlehanded Sailing Society’s annual Three Bridge Fiasco in January, raced only by singlehanded or doublehanded boats, is the largest race in the country is testament to the attraction of shorthanded sailing. At a time when organized racing has been curtailed and sailing with household members is the current guideline, we thought we’d remind you of the thoughts Webb Chiles shared with Latitude 38 readers.

Last fall, six-time solo circumnavigator Webb Chiles spoke at the Richmond Yacht Club. He then explained “Why I sail,” in our November issue. If you’re used to sailing with a crew and are now sailing solo, you’ll find Webb’s perspective good to bring along for the ride.

SHARE ON Tweet Share Email Linkedln
1 Comment
Receive emails when 'Lectronic Latitude is updated. SUBSCRIBE
'Lectronic Latitude: Friday, Jun 5
AIS Vessels Misplaced Off NW Coast
Vessels Caught in ‘Circle Spoofing’ Off West Coast
One of the great technological advancements of modern-day sailing is the ability to watch a vessel’s track as it makes its way around the world.
RC Boats and Beer Cans
Update from the Richmond Riviera
Chris Sullivan is an avid RC sailboat racer, especially in the One Metre Class. Last week, Chris organized a bit of informal COVID-19 RC sailboat scrimmaging at the Richmond Yacht Club.
Sponsored Post
Passage Nautical June Webinar Series
If you're considering the purchase of a boat, it's important to be as informed about the process as possible. Passage Nautical has created a series of live webinars.
Boatnapping Redux
South Beach Boat Stolen and Recovered — Again!
Drew said that the Mackin is at Anchorage #9. I'm like, 'No way! I just retrieved the bloody boat yesterday! This has to be a mistake.'
cruising
Are Sailors Stranded at Sea Seeing a Light at the End of the Tunnel?
Has the COVID-19 pandemic forced some countries to breach international maritime laws and deny sailors safe harbor?
More 'Lectronics »
Report Listing