In June, the boating world watched as the 162-ft schooner Eleonora E was t-boned at Port Tarraco, in Spain, by a Maritime Rescue boat that had encountered mechanical difficulties. The rescue boat Punta Mayor was reportedly conducting a maneuver when its engines became stuck in reverse. The vessel subsequently drove into the schooner where she lay tied to the dock. Though the schooner’s full complement of crew was onboard no one was injured. However, the ship herself sustained a large hole on her starboard side, took on water, and sank. We’re happy to report that a few weeks ago, Eleonora E was successfully re-floated and hauled out.

The salvage operation was carried out by Ardentia Marine and took three weeks and more than 30 personnel. They began beneath the water with divers assessing the damage and initiating the first repairs. International yacht brokers Boatshed.com described the operation as follows: “Once these first tasks were carried out, a set of balloons were put in place, which, accompanied by two large cranes, straightened the yacht. Repairs then proceeded to the starboard side, where the impact occurred, while a specialist team continued temporary repairs underwater.”

Once the main deck had been raised above the waterline, the flooded compartments were pumped out and the ship regained buoyancy.

Eleonora E was launched in 2000 as a replica of the 1910 Herreshoff-designed schooner Westward.

This week’s host, Chris Weaver, is joined by Linda Newland to chat about a lifetime of conquering oceans and teaching the next generation of women sailors. Linda co-founded the Northern California Women’s Sailing Seminar 30 years ago, and was honored with the 2022 Leadership in Women’s Sailing Award by BoatUS and the National Women’s Sailing Association (NWSA).

Linda holds the record as the fastest female to singlehand from San Francisco to Japan, and has cruised and raced across the Pacific Ocean several times. Hear how to celebrate women sailors, battle seasickness, prepare to cross the Pacific, and skipper a crew, and about the time she learned Morse code.

This episode covers everything from sailing seminars to celestial navigation. Here’s a small sample of what you will hear:

And, if you haven’t signed up for the Good Jibes newsletter yet, what are you waiting for? All signups between October 1 and October 31 are entered to win one of five Spracht BoneHead Sport headsets. Sign up here, or see more information at Good Jibes. 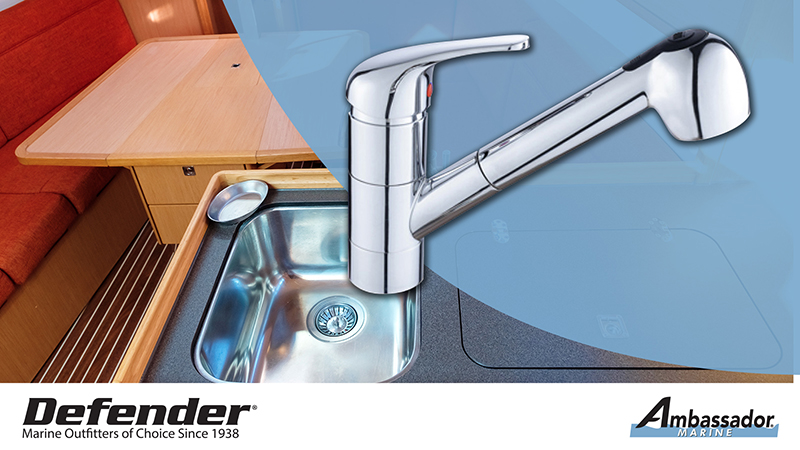 Get your Galley Faucets from Defender — Marine Outfitters of Choice Since 1938.

Once again we crossed paths with many West Coast sailors during our annual pilgrimage to the Annapolis Sailboat Show. The show is a rendezvous of great people and great boats, at one of the best times of the year to be in Annapolis. This year the weather was exceptional.

We always run into a good number of our friends from our West Coast advertisers and others we see just once a year in Annapolis. We wandered the aisles for four days and still didn’t get a chance to talk with everyone. Of note once again was the huge presence of charter companies and sailing vacations. This included the large, multideck catamarans whose top floors appear to rival the height of the Salesforce Tower penthouse.

Most manufacturers were there with new boats on display, though the ever-present supply chain issues did delay some arrivals. Additionally, many manufacturers have large backlogs, with deliveries being quoted in late 2023, and as far out as 2026! There were lots of lithium batteries on display, with the adoption of this improving technology clearly overcoming any market hesitations.

We had a great visit with Ronnie Simpson aboard his new-to-him Open 50 Sparrow, which he is now prepping for the start of the Global Solo Challenge in 2023 from Spain. He took advantage of his outer-dock position to take a couple of demonstration sails with sponsors and Latitude 38 crewmember Nicki Bennett. Another sail took crew from the New York youth program Rocking the Boat.

We still love that it’s an all-sailboat show. The sailing culture and gear are there for the most addicted sailor and gadget geek to soak up and enjoy. It’s still a big-boat show, with large cats from Excess, HH, Lagoon, Leopard, Fountaine-Pajot and more. The monohull lineup was again impressive for anyone who really wants to survey the market to see what’s new. There were some cool small boats like a redesigned, new Sunfish knockoff called a Sol. Looks simple and fun, with a more comfortable, redesigned cockpit. The Melges 15 looked great, and the Tiwal inflatable sailboat from France was a fresh performance twist on compact, portable sailing dinghies.

Cool racing stuff like the Vakaros instruments and Cyclops load sensors were there for those looking for an edge. Experts were there from all companies. If you’re looking for answers you can find them in Annapolis. An expanding array of electric outboards were also there, including Torqeedo, ePropulsion, EP Carry and the new Temo.

There have been no shows in California since the pandemic, though the California Yacht Brokers Association recently announced they are restarting the Pacific Sail & Power Boat Show, currently scheduled for May 4-7, 2023, at Westpoint Marina in Redwood City. For sailors, there’s nothing like an all-sail show, but all shows are a good chance to reconnect with friends and see what’s new. We look forward to Annapolis every year, and will look forward to a local show in May next year.

US Sailing has named five new members to their board of directors. They were officially elected on Friday, October 14, 2022, at US Sailing’s Annual Meeting in New Orleans, Louisiana. All current adult and family members were entitled to vote online. Members also voted in person at the annual meeting. West Coast sailors are well represented on the board.

New US Sailing Board Members

Notably, Marie Rogers is the first Black sailor to serve on the US Sailing board. She’s a past commodore of the Los Angeles Yacht Club and an advocate for increasing diversity in the sport of sailing. We profiled her in Sightings in the November and December 2021 issues of Latitude 38.

“Our nominating committee made it a priority to continue our effort for bringing a diverse perspective to the board and provided us with incredible new board members,” said board president Rich Jepsen, himself a West Coast sailor, out of Alameda. Latitude’s publisher John Arndt interviewed Jepsen for a Good Jibes podcast released on January 4, 2022.

Sheila Tolle was selected as Independent Director, a US Olympic and Paralympic Committee-mandated position. The role brings an outside perspective to the board. Tolle comes to US Sailing from USRowing, where she has served as a longtime referee and board member.

SHARE ON Tweet Share Email Linkedln
Leave a comment
Receive emails when 'Lectronic Latitude is updated. SUBSCRIBE
'Lectronic Latitude: Monday, Oct 17
Tips on Heading South
Counting Down to the Baja Ha-Ha’s Halloween Kick-Off
There are only two weeks left until the Ha-Ha kicks off from San Diego. Check out the Poobah's latest tips and make sure you're ready.
Digging Deep
San Rafael Dredging Could Be Completed by End of November
When fully complete, the San Rafael Channel will reach its authorized depths of six to eight feet.
Sponsored Post
Plan Ahead With KKMI
Even with more covered space than any other boatyard on the Bay, it's often a trick to book space at the last minute…
From the Magazine
Delta Doo Dah 14 — Take Me to the River
This year's Delta Doo Dah was the most complete, in-person event since the 2019 pre-COVID event, and sailors came from near and far to enjoy the fun.
Whales, Microplastics, Sewage, Flares
Virtual Meeting to Cover Topics Concerning Boaters
Join the California Clean Boating Network on November 9 for a free and exciting educational virtual meeting.
More 'Lectronics »
Report Listing