Last month we received an email with this in the subject line — ɐᴉlɐɹʇsn∀ ɐʇʇno ʇɥƃᴉɐɹʇS. We all know the Aussies are referred to as being “down under,” but do they actually write like that? Either way, we were curious and wanted to know what the heck was going on. After following a few links we discovered that while most of the 38 teams that have entered the R2AK (Race to Alaska) are from the USA and Canada (France and the UK boast one team each) two teams are from Australia.

The Aussie teams, Vegemite Vigilantes and Team Fire Escape, are set to start with the rest of the race fleet on Monday, June 13, in a bid for the first-place cash prize of $10,000. Second place wins a set of steak knives. (No, really!)

The four-person team named after Australia’s national food, Vegemite, is from Wynnum, which lies on the Queensland coast, slightly southeast of Brisbane. Andrew de Bruin, Scott Wallingford, Trevor (Zam) Bevan, and Norris Comer have entered a 24-ft 3-inch-long Corsair 760 Sport (a trailerable trimaran) and will operate a pedal-powered propeller system. And with the whole premise of the R2AK being that vessels are not allowed to have an engine, the pedal-powered option sounds like a good alternative. Of course the Corsair is actually a sailboat, but no one has mentioned hoisting the sails. We can only assume they are part of the team’s plan.

Another “not allowed” item on the R2AK rule page is pre-arranged support — “no support boats, no food drops, no guy you call for information or that other guy you hired to stand on the shore and hand you cups of Gatorade. The deal is that you can have help along the way, just nothing you pre-arranged and whatever you do has to be available to the other racers too.”

It all sounds hardcore, and it no doubt is, given the competitors have to travel 710 miles to reach the finish line in Ketchikan, AK; that’s after they successfully complete the “proving ground” — a 40-mile sprint from Port Townsend, WA, to Victoria, BC, Canada.

The other Australian crew is Team Fire Escape. Stuart Sugden, Stephen Colman and Robert Killip, who are from Kalaru, New South Wales, will use pedal drive to operate their Cal 20. (Again, what about the sails?)

Listed among the USA teams are three from California, including one from San Francisco. Team Let’s Row Maybe? is Michelle Choy and Carling Zeeman, who will row a 22-ft-long Merry Sea rowboat.

The R2AK is a “self-supported race” with no supply drops and no safety net. Teams that apply are scrutinized and vetted for their ability not so much to reach the finish line as to survive. In 2019, 45 teams were accepted and 25 finished.

The Race to Alaska is a project of the Northwest Maritime Center in Port Townsend, WA, a 501(c)(3) nonprofit organization whose mission is to engage and educate people of all generations in traditional and contemporary maritime life, in a spirit of adventure and discovery.

You can learn more about the R2AK and follow the teams’ progress at www.r2ak.com.

“Oh no! There’s a boat in my pool!” If your pool is housing a docked boat, where will you swim?

Leave your caption in the comments below. And remember to check out the June issue for last month’s Caption Contest(!) results. 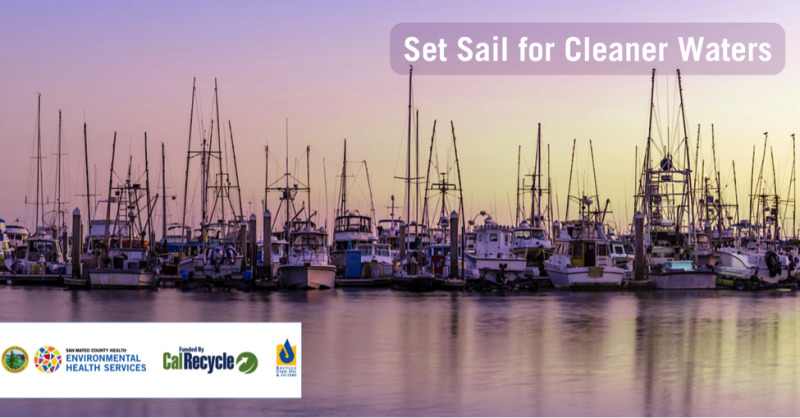 Boaters are drawn to the beauty and serenity of our oceans and waterways. They’re also responsible for preventing pollution and protecting our marine ecosystems, which are sensitive to hazardous waste, motor oil, and trash that may come from boats. Hazardous waste and motor oil can be harmful to marine wildlife, even in small quantities. Additionally, ocean animals may become entangled in trash or mistake plastic for food.

Luckily, there are many ways boaters can get “all aboard” with pollution prevention. Here are five eco tips for the ocean-loving boater: 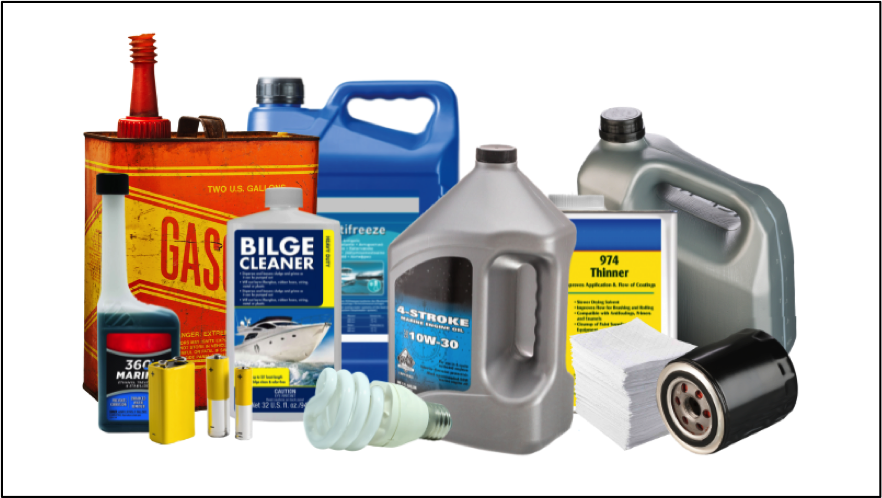 Many cleaning products contain chemicals that are harmful to marine ecosystems if released directly into waterways.

If you have unwanted boating gear that is still in good condition:

Out with the old, in with the new — If your gear is past its useful lifetime, see if there are options to recycle it into something new. For instance, SeaBags turns old sails into reusable bags, and Suga recycles old wetsuits into new yoga mats!

These tips are brought to you by San Mateo County Environmental Health Services (EHS). EHS works to ensure a safe and healthy environment in San Mateo County through education, regulation, and monitoring. Visit smchealth.org/boatoil for more boater information and resources.

Sailors make great winners, in more ways than when winning races. We know this because they keep finding Golden Tickets in Latitude 38 magazines. “What is a Golden Ticket?” you ask. It is a ticket that has been popped into the magazine at the time of printing, and we have no idea how many are out there, or which magazines they are in. It’s a complete mystery to us.

Peter Veasey found his ticket in his May issue, which he picked up at Fortman Marina in Alameda. He’s a retired Merchant Marine officer and has been sailing on the Bay since 1968. Currently Peter has a Catalina 27 and a mini 12-meter.

And just to show how randomly the Golden Tickets are shared in the pages of the magazines, Paul Ryfa from Benicia also found his in the May issue.

Paul came to California from Boston in 1994 and crewed on an Express 37 out of Vallejo Yacht Club. He then bought himself a Cal 25 and raced out of the Benicia Yacht Club. He’s also crewed on an Olson 25 out of Richmond in one-design races, and is currently aboard a Contessa 33, Warwhoop, in Benicia. “Sadly, Warwhoop was damaged last Thursday [in May] during the weekly beer can race,” Paul added.

Richard Treat from Antioch found his Golden Ticket a little earlier in the year when he went to Berkeley Marina, which is where he keeps his Pearson 26.

Andy Bongiorno went to the Blue Pelican store in Alameda to get his copy of our famous magazine, and found the Golden Ticket inside.

Andy is currently a partner in a Beneteau 305 that is berthed at Brickyard Cove Marina. He and his partners participate in the RYC Wednesday night beer can races and are signed up for this weekend’s Delta Ditch Run.

“I have owned a Laser II, Catalina 22, and a J/24 since I have lived in Oakley. They have mostly been daysailed on the Delta, and I have participated in two Delta Ditch Runs, a Franks Tract Regatta, and a Vallejo – Brothers race on the J/24.”

Above are four happy sailors who are also winners. To get your free Latitude 38 hat or T-shirt, look for the Golden Ticket in your next issue of Latitude 38. Don’t know where to get one? We can mail you the magazine each month — subscribe here. Or, you can head on down to your nearest or favorite distributor and pick one up in person — which is fun too, because then you get to have a chat with everyone along the way!

Nearly four decades ago, Linda Newland, a greenhorn sailor, found herself alone on a sailboat with a sorry lack of nautical know-how. She became determined not to have the humbling event define her sailing. Now with thousands of Pacific Ocean and Pacific Northwest sailing miles under her keel, Newland made that lonely day on the water a turning point on her journey to competency, racing, record-setting and leadership among women sailors.

Along with a newly formed crew of women sailor friends, Newland began to organize events to hone and share her newfound skills with other women. She thus laid the foundation for Island Yacht Club’s Women’s Sailing Seminar, now in its 30th year, a testament to its popularity and demand.

Now BoatUS and the National Women’s Sailing Association (NWSA) are honoring Linda with the 2022 Leadership in Women’s Sailing Award. The annual award recognizes an individual for educating and enriching the lives of women through sailing.

IYC’s nomination sought to honor Newland’s “decades of achievement and serving as a shining star for thousands of women,” said Ros de Vries, commodore of the Alameda-based club. “Linda’s experience and her contributions to the sport of sailing are indeed exemplary, and indeed her own. The pathways she has created continue to inspire and empower women who sail,” she added.

Linda holds the fastest female singlehanded San Francisco-to-Japan record. She is a two-time Los Angeles-to-Honolulu Transpac competitor as well as a Pacific Cup veteran. In the 1997 Transpac aboard her own boat, Newland skippered an all-women crew to a second-place division finish.

In 1980, under her previous name, Linda Weber-Rettie, she completed the Singlehanded Transpacific Yacht Race from San Francisco Bay to Hanalei Bay on Rough & Rettie, her Yamaha 33. In 1986, on Predator, a 28-ft Hawkfarm, Linda competed in the same race against her new husband, Dan Newland.

A 100-ton merchant marine license holder, Newland teaches sailing and is a certified American Sailing Association instructor. She has served as secretary for Recreational Boaters of Washington, which represents recreational boaters’ interests in Washington legislative and regulatory actions. She’s also a past commander and now assistant squadron education officer of the Point Wilson Sail and Power Squadron in Port Townsend, Washington. A long-standing board member of NWSA, she has served as vice president, president and co-chair of the AdventureSail committee.

“On Friday, June 17, the NWSA will award the 2022 Leadership in Women’s Sailing Award to Linda Newland,” says Ros. “Join us on Zoom as this award is announced. We’ll also enjoy women sailors telling authentic sailing stories.”

Newland will receive the award at the IYC Northern California Women’s Sailing Seminar on September 10-11 at Afterguard Sailing Academy in Oakland, after completing a long-delayed Alaska cruise with her husband Dan and family pets Nubs the cat and Tutu the bird. 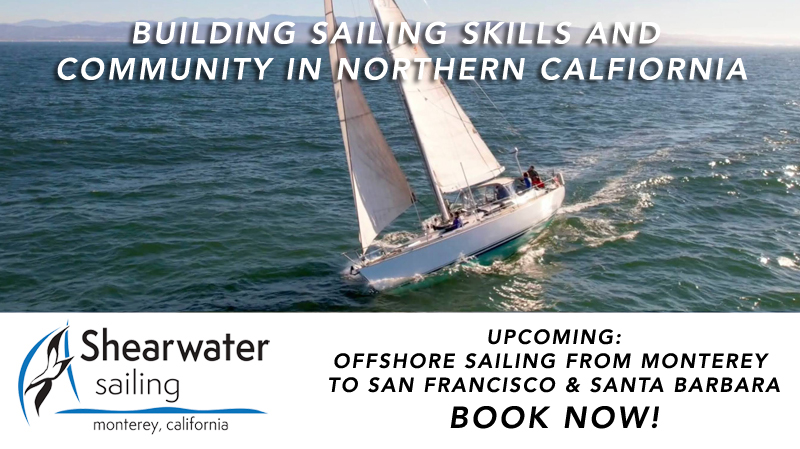 Atalanta sails again, from Monterey to San Francisco and back on July 30-31. Each leg takes 15-18 hours. Join us for one or both legs. Lunch is included and return transportation is available at either end. Prices are per person, maximum of six. $395 per person. 20% discount on the return leg for crew joining both legs.

Perfect for those looking to gain offshore experience. We will be teaching offshore sailing underway, from navigation to sail handling to helming to cooking at sea. Active participation is encouraged! Click here for more info and booking.

SHARE ON Tweet Share Email Linkedln
Receive emails when 'Lectronic Latitude is updated. SUBSCRIBE
'Lectronic Latitude: Wednesday, Jun 8
The Ocean Hosts Sailors
‘Mother, Mother Ocean,’ We Have Heard You Call — World Ocean Day
Sailors love the ocean, and why shouldn't they? It's home to some of the best days of our lives. Take a moment to say, "Thanks, ocean."
Sailing for Your Ears
Good Jibes Episode #43 With Captain Donald Lawson
Captain Donald Lawson talks about the planning and preparation needed to break some of the most difficult sailing records in the world.
Sponsored Post
Discover EWOL Performance Propellers
Find out the most suitable propeller size for your boat and request a free personalized quote.
OYRA Full-Crew Farallones Race
A Slow Jaunt to the Farallones
Saturday's OYRA Race around the Farallones was a slow, gray affair.
Put This On Your Calendar
‘Women on the Water/Women at the Helm’ Regatta Announcement
The 2022 annual Women on the Water/Woman at the Helm (WOW/WAH) regatta is set to take place over two days on August 6 and 7.
Sponsored Post
Waves of Improvement Are Transforming the Berkeley Marina
Download a free day pass for your boat and check out all the improvements we have to offer.
More 'Lectronics »
Report Listing