Only a portion of the racers attended Encinal Yacht Club’s make-up Jack Frost race day on Saturday, April 2. The day started with light westerlies and a 3-knot flood, testing the fleets to find the wind and avoid the slicks of current on a short windward-leeward course. The struggle upwind was rewarded with a rollicking downwind ride on the current. The current abated, and the west wind increased to about 15 knots for the second race. All fleets were treated to a fun, long race around Alcatraz to top off the season. Near-summer conditions brought smiles to the faces of the avid racers.

Mike and Sean Mahoney’s Story Maker, a Tartan 101, had two first-place finishes in Division 2 for Races 9 and 10. That was just shy of being enough to take her into first for the season. Zhenya Kirueshkin-Stepanoff’s CentoMiglia (a Flying Tiger 10), with two seconds, held onto her first-place series position by one point.

In Division 3, Tim Roche’s J/92 Zaff and Joan Byrne’s Olson 911S Heart of Gold came out to defend their first and second season positions. Heart of Gold took first in Race 9, but Zaff pulled out ahead for a first in Race 10, clinching her overall lead.

Division 1, the Express 37s, had determined their positions at the end of Race 4, with Larry Baskin’s Bullet taking first for the season and Andy Schwenk’s Spindrift V second.

David Gruver’s Sketch was unbeatable, with all bullets for the series (after one throwout) to lead the Olson 25s. David Scott’s O’Mar, in second place, kept her clear lead over Steve Smith’s Synchronicity, #3.

The Santanta 22s saw some fierce competition, with the lead boats only minutes apart after the hour-long race around Alcatraz. Jennifer McKenna’s Zingaro kept her series lead, with firsts in Races 9 and 10. Chris Klein’s Alegre was second, followed by Deb Fehr’s Meliki in both Race 9 and the season standings. Meliki and Alegre traded places in Race 10, but that was not enough to change the overall score in the 10-boat class.

As Saturday dawned clear and sunny with a forecast of strong winds, vendors set up their tents and tables at Svendsen’s Marine & Industrial Supply‘s first annual Spring Fling. The event was a great success, with sailors and vendors from around the Bay coming together to meet and greet, and share their wares. Fortunately the wind waited until almost the very end and no tents were blown over, and we didn’t see anyone having to chase their leaflets or business cards throughout the day. Instead attendees were treated to expert advice, special deals, and even hamburgers.

And to round out the day, Latitude 38 shared some cheer in celebration of sailing, and the magazine’s 45th anniversary.

If you missed the show on Saturday, we’re sorry for you, but after such an outstanding day was enjoyed by all, we’re certain you’ll make sure to check out the next Spring Fling.

The United States Coast Guard has reported that the 564-ft container ship Wan Hai 176 has been towed into San Francisco Bay after it reported a loss of engine power on Friday afternoon. The Wan Hai 176 anchored approximately seven miles off Point Reyes overnight as strong winds and rough ocean conditions prevented towing vessels from deploying lines to tow the ship. (The conditions on the ocean off our coast were so severe that the Bay Area Multihull Association canceled the Doublehanded Farallones Race scheduled for Saturday, April 9. We later heard of gusts up to 50 knots outside the Gate, and a high surf advisory.)

On Sunday evening, when the weather had abated, the 112-ft tug Delta Deanna was able to pass tow lines to the Wan Hai 176 crew at its anchored location. Once the lines and anchors were secured, the tug began towing the Wan Hai 176, with the tugs Stacey Foss, Delta Billie, Delta Deanna and Rachel Allen escorting the ship to Anchorage 9 in San Francisco Bay.

The Wan Hai 176, a Singapore-flagged vessel with 21 people on board, has approximately 39 thousand gallons of fuel, and is carrying miscellaneous materials in 783 containers. There are no reported hazardous materials.

Foiling captured the worldwide attention of sailors during the epic 2013 America’s Cup on San Francisco Bay. Although foiling started long ago, when the Wright brothers used lift on a wing to get a plane into the air, for sailors, the America’s Cup catapulted foiling into the mainstream.

Not quite a decade later, in the wake of that “wakeless” event, the ripples have expanded outward and foiling is everywhere. Last year’s Ronstan Bridge to Bridge race included windsurfers, kiteboards and wing sailors. For the first time, every competitor was on foils. MOD 70 trimarans and IMOCA 60 monohulls are foiling across oceans and around the world. Foiling Week on Lake Garda in Italy has become an annual event showcasing the latest in the evolution of foiling.

We ran into the Foiling Week organization’s Marco Rossini, who was in San Francisco to witness the SailGP event. Foiling Week shared the film trailer below, for the first-ever Foiling Film Festival, to run in conjunction with Foiling Week at Lake Garda June 29-July 3.

California is host to lots of homegrown things, so it’s not surprising the early seeds of foiling sprouted here. The state boasts many of the world’s most famous surfboard shapers, the “Fast is Fun” sled culture, the first “it-will-never-work” kiteboard racing, and now many carbon foil shapers. It’s home to five-time women’s world kiteboarding champion Daniela Moroz, but also to numerous other world-champion kiters, boarders, surfers and foilers. Foiling has now truly gone global with much of the development happening in Europe, and the foiling culture is thoroughly embedded in one more aspect of the eclectic world of sailing.

St. Francis Yacht Club started the world’s first kiteboard racing on the Bay, before foiling kiteboards hit the scene. Now, foiling kiteboard racing will debut in the 2024 Summer Olympics in Paris. StFYC is following up with what is perhaps the first summer foiling wing-sailing racing series. Wing sailing is much like kite sailing — but with no strings attached.

Many of us look forward to our sailing weekends as a time to slow down. Now, in the ever-expanding spectrum of ways to go sailing, we’ll have to make room for those who want to go fast. At 20 or 30 knots, the Bay and even the oceans start to get small. We continue to marvel at the many creative ways humans work with the forces of nature for a rippin’ good time — going 5 to 50 knots. 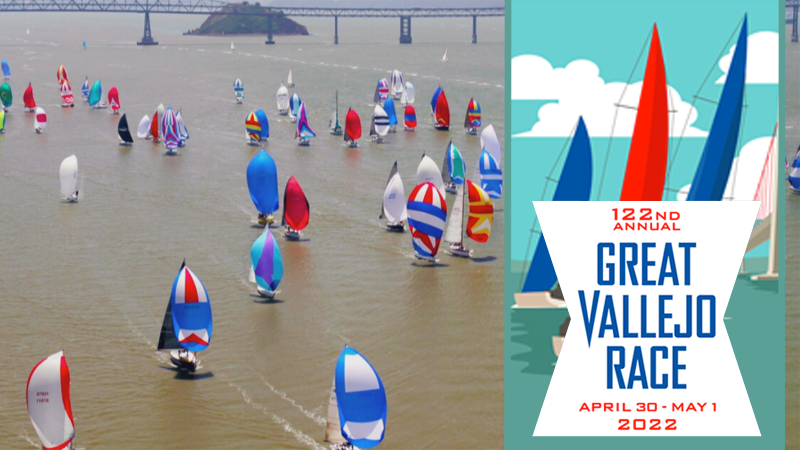 The first mention of a race came in 1925, when PICYA organized a cruise from Berkeley to Vallejo on a Saturday to be followed by a race back on Sunday. This is probably the official origin of the Great Vallejo Race, now reputed to be one of the largest inland regattas in the United States, usually drawing 200+ boats annually. Now under the aegis of the Yacht Racing Association (YRA) and hosted by the Vallejo Yacht Club, the two-day race marks the official opening of the San Francisco Bay racing season.

The race most often starts near the Berkeley Circle on Saturday morning, rounds a single weather mark near Alcatraz, and then heads to Vallejo, usually under spinnaker for the remainder of the race. The challenge is to maintain speed through the shadow of Angel Island, find the best combination of wind and current past the Richmond-San Rafael Bridge and East Brother Light Station, and then avoid the mud shoals on the east side of San Pablo Bay. Depending on the day, the passage can be a challenging breeze (intentional pun), or a miserable drifter, complicated—as always—by the current, no matter its direction.

As the boats enter Carquinez Strait, they bunch together, making the turn into Mare Island Strait. Because of the topography of Mare Island, as well as the fact that it sits at the mouth of the Napa River, local knowledge (or many years of sailing the race) can make the difference as the yachts maneuver toward the finish line on the Vallejo city waterfront. Winds vary from light to heavy and become exceedingly shifty. By the time they enter the strait, many of the crews are, let’s say, “over-relaxed” by sun, surf, and suds. This is where the fun really starts! In the mad dash for the finish line, sharp crews can usually pick off several places with close attention to trim, wind, and current. Just be sure to check your charts and keep a close watch on your depthsounder!

SHARE ON Tweet Share Email Linkedln
Receive emails when 'Lectronic Latitude is updated. SUBSCRIBE
'Lectronic Latitude: Friday, Apr 8
San Francisco to Japan Solo
Kenichi Horie Passes Halfway to Hawaii Mark
On March 26, Kenichi Horie set sail upon his 6,000-mile/70-day voyage from San Francisco to Japan. Here's a little of what he's been up to …
Sailing Instructor Apprenticeship
Shoreline Lake Launches Counselor-in-Training Sailing Instructor Program
Shoreline Lake in Mountain View has launched a one-of-a-kind comprehensive sailing instructor training course, designed for sailors aged 15 and over.
Sponsored Post
Svendsen’s Spring Fling Is Tomorrow, April 9th
Come down to Svendsen’s in Alameda on April 9th from 9 a.m. to 5 p.m. for once-a-year deals from your favorite suppliers.
Team Racing Regatta in SoCal
Lightning Strikes at Baldwin Cup
Eleven teams from the East and West Coasts — plus one from across the Pond — competed in the revived Baldwin Cup.
Winds Of Trash Collection
The Right Weather for Cleaning Up Angel Island Beaches
"During the winter we have a custom of cleaning the south-facing beaches on Angel Island."
Sponsored Post
Download Division of Boating Waterways’ Pumpout Nav. App
Download the free app to find the closest participating sewage pumpout, dump station, and floating restrooms.
More 'Lectronics »
Report Listing