On March 26, Kenichi Horie set sail upon his 6,000-mile/70-day voyage from San Francisco to Japan. The 83-year-old, who at age 23 was given a visa and key to the City after his unofficial arrival in the Bay, was treated to a farewell by a crowd of well-wishers before being accompanied out the Gate. We’ve been keeping track of Kenichi’s voyage and want to share some updates with our readers. We hope our readers will forgive any errors, as none of the Latitude crew are native Japanese speakers and Google Translate does not recognize some of the nuances in other languages. Here goes …

Kenichi’s first logbook entry talks about a storm that he encountered soon after his departure. “I was baptized by Arashi [storm] as soon as I set sail. Both rain and wind have become a little weaker, but according to the weather forecast, it will continue until tomorrow morning. Tight! I just endure it.”

Suntory Mermaid III rode out the storm, and by March 28 Kenichi was enjoying the first sunshine he had seen since exiting the Bay. Weather conditions appeared favorable, with winds averaging 10 knots from the north and waves of around 3 meters (9-10 feet). “I am heading southwest at an average speed of 5 knots. Everything is going well. According to the weather forecast, stable weather will continue for the next week. Appreciated.”

Before setting off, Kenichi had practiced sending emails from his device, thinking it would be an easy way to communicate, but with a moving base the procedure proved a little more difficult. “The sea was stable and the waves were about 2m [6-7 feet], but it was a narrow and swaying ship. Under these circumstances, it was difficult to write an email with a smartphone. After hitting it for a while, it felt like ‘sea sickness’.”

By March 30 Kenichi’s thoughts had turned to organizing the stores in his tiny cabin. Fresh fruit and breads that were brought onboard on the morning of departure had yet to be allocated a proper home. “… the arrangement of the items to be loaded has changed significantly. For this reason, I was in a state of ‘I don’t know where it is.’ It seems that every day of exploring goods will continue for a while.”

As the purpose-built, 19-ft aluminum cutter continued sailing the north winds, Kenichi attempted communications using the satellite phone, a piece of equipment he did not have aboard the original Mermaid when he crossed the Pacific in 1962. “If you don’t speak Japanese for days, you will get stressed. It spit out all at once, sometimes causing trouble to the other party. Even if you can use satellite phones and keep in touch every day, ‘tools’ that allow you to talk with many people and get energized are now a must-have tool.” And by April 2, he was able to communicate with someone on Oahu, Hawaii, and later people on the coast of Japan.

On April 3 Kenichi reported he was sailing at around 4.8 knots and that all systems aboard his boat, and he himself, were working well. “I am in perfect physical condition. So far, it is a perfect score of 100 points.” Ten days into the voyage, Suntory Mermaid III was 1,850 km (about 999 nautical miles) out to sea; approximately half the distance between San Francisco and Hawaii. The seas were calm with a swell of around 6 feet. “It is a sky full of stars. Is beautiful. At night when the wind stops and there are no waves, the starry sky is reflected on the surface of the sea and surrounded. It’s a breathtaking view. It’s not a good condition for a yacht driven by the wind, but …” The storm a few days earlier had left Kenichi with a spell of seasickness and lack of appetite, and the light winds were appreciated.

Kenichi takes meals twice a day. “Breakfast is between 7 and 8 o’clock. Supper is served around 1800. Snacks are mainly cookies (pictured) and fruits. I regret that there are a few snacks.”

As the days pass the weather gets warmer, and, as all voyaging sailors do, Kenichi dreams about land-based conveniences. “The temperature is 20 degrees [68°F]. The seawater temperature is 17 degrees [62°F]. I want to take a shower little by little. All you have to do is draw seawater from a bucket and put it on your head. I think it’s refreshing just to wash your head with seawater soap. But it’s a little cold. A little more patience.”

According to Kenichi’s latest report on April 7, the winds are increasing and expected to peak on around April 10. “The wind speed is up to 40 knots, and the wave height is 4m. It’s best to be careful.”

We’ll be following Kenichi Horie’s voyage over the coming weeks and invite you to join us. In the meantime, if you’d like to follow his journey daily, you can do so here: Suntory Mermaid III Logbook.

Shoreline Lake in Mountain View has launched a one-of-a-kind comprehensive sailing instructor training course, designed for sailors aged 15 and over. Counselor-in-Training (CIT) is a 12-month apprenticeship-based “teacher training” curriculum that combines skills development classes with experiential learning, under the supervision of experienced certified instructors. The aim is that students can gain the “real-world teaching experience” that forms part of US Sailing Level 1 Instructor Certification.

Shoreline Lake Boathouse supervisor William Gardner created the CIT program, based on the traditional outdoor youth camp counselor-training standard. To suit a diverse group of applicants, the program allows sailors of varying levels of expertise to advance at their own pace and apply lessons in a real-world environment by shadowing certified instructors in both the sailing classes and summer camps.

“To develop a complete sailing instructor course, besides a great spot to do this, we needed to bring all these disparate puzzle pieces together and help lay them out in a coherent fashion useful to the accomplished, as well as new, sailors here,” Gardner said.

The CIT program will be a precursor to US Sailing’s Level 1 Instructor certification. Through shadowing Shoreline’s instructors, the students gain many more hours of experience than are available in the predominantly online US Sailing courses.

The program includes introductory and intermediate sailing classes along with continued access to practice and instructional resources, and time on the water with certified sailing instructors to learn how to safely and effectively run a class or summer camp, with strong emphasis on US Sailing teaching methodology fundamentals, and hands-on powerboat training with a focus on skills needed for the US Sailing Instructor practical exam.

Applications for the program are open now and close at the end of April. And while spaces are limited, Gardner said extensive sailing experience is not necessarily required, as CIT allows sailors of varying levels of expertise to advance at their own pace and apply lessons in a real-world environment.

Shoreline Lake wrote in a press release, “Given the increasing need for qualified sailing instructors throughout the Bay Area, this hybrid learning model — combining skills development classes, plus experiential learning, under the supervision of experienced certified instructors — will yield a coordinated and standardized system for developing sailing instructors.”

Boat Shows are officially back in the Bay Area. Come down to Svendsen’s in Alameda on April 9th from 9 a.m. to 5 p.m. for once-a-year deals from your favorite vendors. Stick around for a DJ, food truck, and a ton of raffle prizes. Get to know your favorite names in the industry and have a great day doing it. Entry and parking are free; get all the info at svendsens.com/boatshow2022. 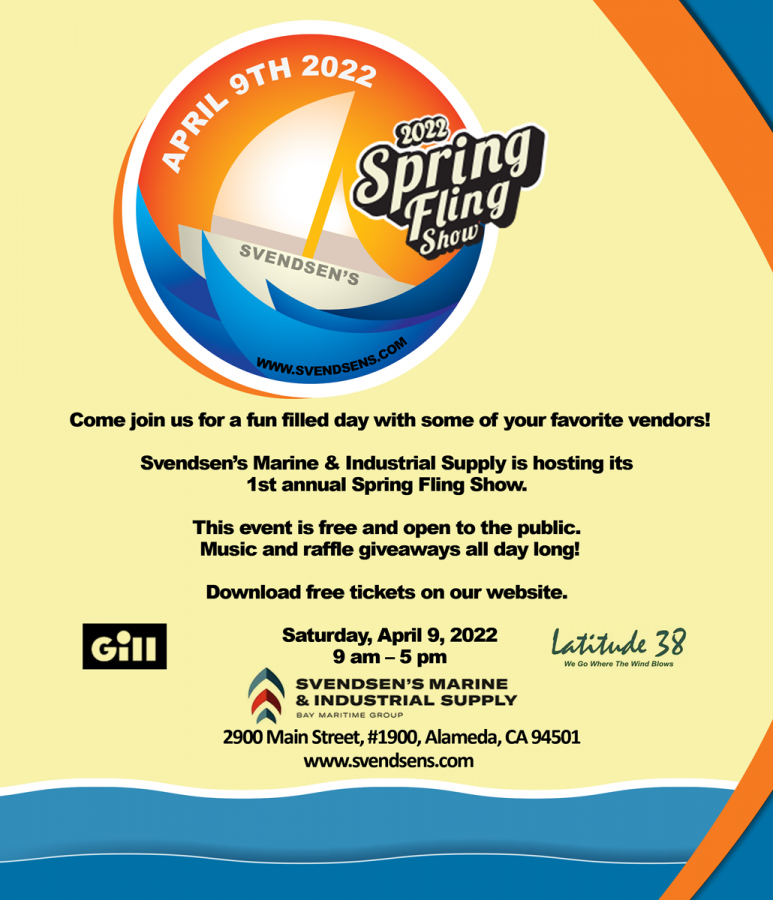 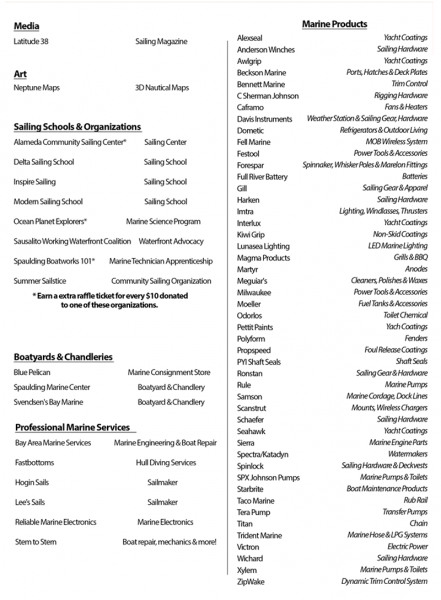 We hope to see you there!

Eleven teams from the East and West coasts — plus one from across the Pond — competed in the revived Baldwin Cup Team Race regatta at Newport Harbor Yacht Club on March 31-April 2. The event skipped 2020 and 2021 due to you-know-what.

Team racing pits a team of four boats against another team of four boats. As in match racing, on-the-water umpires make instantaneous decisions during a team race. There is no time for the umpires to consult a rulebook or to go into long discussions of the rules. They must be very well-versed in the racing rules and of the tactics and strategies of team racing.

For the Baldwin Cup, NHYC provided a fleet of 12 Harbor 20 keelboats. A crew of two sailed each boat.

NHYC won their seventh consecutive Baldwin Cup title when they beat SDYC in this year’s finals.

StFYC emerged from the Stage 1 qualifying rounds as the top-ranked team. SDYC topped the rankings in the Stage 2 qualifying rounds. They and the two NHYC teams plus Royal Thames YC, CYC and NYYC continued on to the knockout rounds. In the final, NHYC Lightning defeated SDYC, with NHYC Thunder rounding out the podium.

After reading about Edward Stancil and Nick Reyna cleaning up the beach near Sequioa Yacht Club early in March, the Scott family shared a couple of photos from their own trash collection on the Bay, writing, “Our family also believes in trying to help clean up the Bay that we love so much.

“During the winter we have a custom of cleaning the south-facing beaches on Angel Island. Many of them can be accessed only from the water, and with the summer westerlies, can be hard to get to for six months of the year.”

The Scotts usually find a large amount of trash, and quite a variety, too.

“Kudos to everyone who helps clean the oceans!” From the Scott Family, Papillon, F-27, San Francisco Bay. 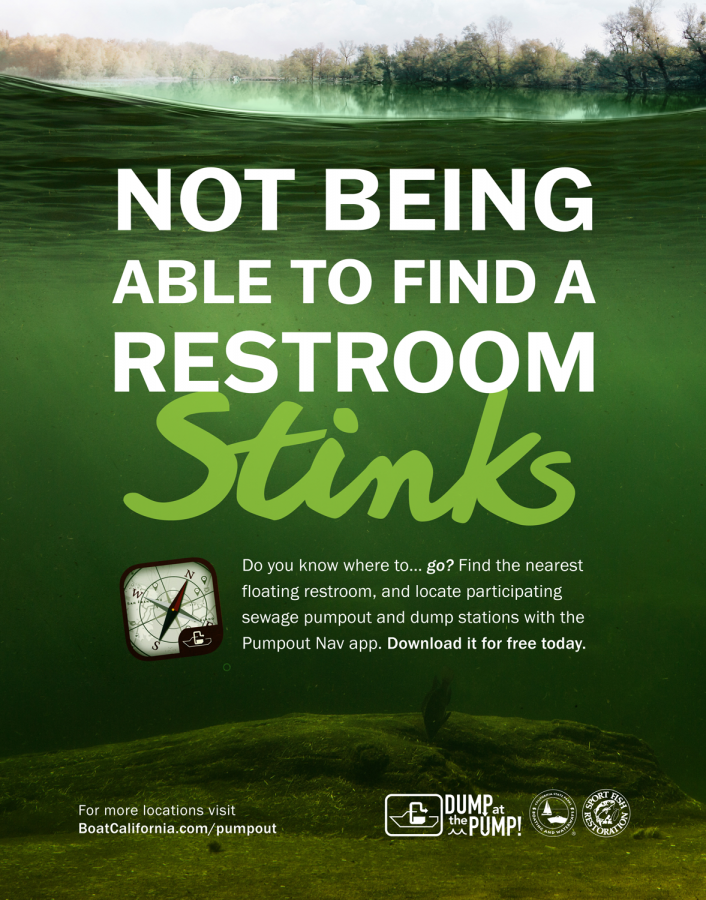