While reader Walt Neve was renewing his subscription to Latitude 38 magazine the other day, he updated us on the miraculous story of Dustin Reynolds. Dustin became the first double amputee to sail around the world singlehanded when he completed his seven-and-a-half-year circumnavigation in Hawaii earlier this month aboard his Bristol 35, Tiama. Walt was one of many sailors who followed Dustin’s voyage after he first read the Sacramento native’s story in the March 2015 issue of Latitude 38.

While we were adding Dustin’s name to our West Coast Circumnavigators list we were reminded how few names we’ve added in the last couple of COVID years. While there are still thousands of boats out cruising, many are stuck in place or have had to dramatically alter their course or pace.

We spoke with Dustin, who said he was fortunate to already be in the Caribbean when the pandemic hit. He was able to sail up the East Coast and spend some time in Bristol, RI, to get some updates and repairs to Tiama before resuming his voyage. The last legs of his voyage took him through the Panama Canal, to the Marquesas, and then back north to Hawaii. He said during the last 61 miles he was ‘treated’ to 35 knots on the nose before finally completing the loop on December 4 in Kona, HI. Upon arrival he has been reconnecting with family and friends whom he hasn’t seen in over seven years.

We’ll have more on Dustin in an upcoming issue of Latitude 38, but you can catch up on his adventures at his site, The Singlehanded Sailor. After seven and half years he continues to live aboard Tiama while planning to share his inspiring story with a speaking tour, and spending time sorting out his next moves.

OK, so it’s not quite the New Year yet, but we’re anticipating its arrival in just another day or so. The good news is that the January issue of Latitude 38 is out tomorrow!

This issue has lots of fun stories and features, along with our regular columns. Here’s a sneak preview:

Clear the Decks, Batten the Hatches!

Fall 2021’s first big storm on October 24 was a major weather event — an “atmospheric river combined with a bomb cyclone.” The unpredicted hurricane-force winds were so strong that most rescue teams could not go out during the storm itself. The morning winds, predicted to be in the 20s, were recorded at 40 kts gusting to 60 kts, combined with a strong flood current, and the afternoon/evening winds were even stronger.

Many boats suffered. Three were wrecked when pushed onto lee shores: A 40-ft sailboat and 20-ft powerboat had been at anchor in Richardson Bay, and a 35-ft sailboat was underway trying to get to a safe harbor but was pushed onto Brooks Island. A 28-ft powerboat sank, and a 38- to 40-ft houseboat capsized in the hard-hit Richardson Bay anchorage. Two boats rafted at anchor, also in Richardson Bay, were partly submerged. A vessel in Belvedere Cove was reported having sunk at its dock. Partly submerged vessels that created oil sheens included one each at three Peninsula marinas, and one at Alameda Marina.

In the November issue, we shared Part 1 of Los Angeles Yacht Club staff commodore Marie Rogers’ efforts to bring more diversity to sailing. As the pandemic unfolded in 2020, the Southern California Yachting Association reached out to her, asking her to lead a Diversity, Equity and Inclusion (DEI) initiative. Her recommendations would be implemented across 92 member yacht clubs, spanning from Morro Bay into Mexico and eastern Arizona. She began by speaking to the clubs — virtually — on DEI and yachting, and how they can play a more active role in inviting the wider community. This made some participants visibly uncomfortable. Or sometimes, they expected her — as a Black person — to possess all the answers when talking about non-white and mixed-race people, a growing segment that now makes up 42% of the US population (at the 2020 census). “It’s exhausting, but never boring,” she says.

Boat of the Month: Millimeter

In the 170 years of America’s Cup racing, perhaps no other class of boat stirs the sailing fanatic’s blood more than the 12 Meter. I loved watching the 1980s-era races — especially when the gigantic spinnakers were hoisted and doused with unimaginable athleticism by guys whose definition of technical wear was a pair of skimpy shorts. 12 Meters are big boats that demand big teams and big money to operate — but are still relatable enough in their operation that small-time sailors like myself can aspire to sail one — well, no. We can simply dream. Now, imagine that 70 feet of grandeur scaled down to 12 ft 6 inches in length. Now it all sounds more manageable, doesn’t it?

Also in the January issue:

If you’ve subscribed to Latitude 38, you should receive your December issue in the mail any minute now. If you haven’t subscribed you’re missing out. But you can pick up your copy from your favorite distributor.

The crew at Spaulding Marine Center would like to extend their best wishes to you and your families for a safe and prosperous New Year!

This year we launched California’s first nationally approved marine technician apprenticeship program — Boatworks 101 — and our first cohort of young apprentices are learning more and more every day. We extend our sincere thanks to the community: our kind donors, and boat owners who support us. When you haul your boat with us you are furthering their tuition, alongside our qualified technicians, to give them a better start in the marine industry. So we thank you all for your continued support of Spaulding Marine Center and the Boatworks 101 apprenticeship program. 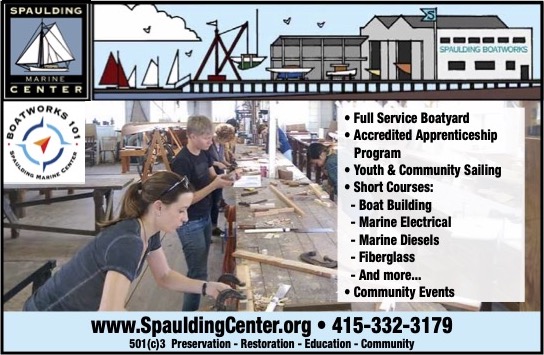 We look forward to more growth and innovation in 2022 and invite you to join us. If you would like to have your boat serviced in our yard, or would like to volunteer your time, please contact us at (415) 332-3179, or check out our website: www.spauldingcenter.org.

The Old Farmer’s Almanac received this question from a reader:

“During El Niño and La Niña years, I heard the phrase ‘Southern Oscillation’ from meteorologists. What does this mean?”

“The Southern Oscillation is the official term used to describe specific quirks in pressure patterns across the tropical Pacific. Pressure areas between Darwin, Australia, and the east central Pacific, near Tahiti, are studied. When pressure is low in one area, it is high in the other, and vice versa. Sea surface temperatures also fluctuate in the same way.”

Yeah, OK, but if we don’t live in or cruise to one of those places, what do we care?

“These changing patterns affect the weather globally, particularly precipitation. Because the see-sawing effect of these pressure areas and surface temperatures fluctuate slowly, over a year’s time usually, forecasters can use Southern Oscillation data to predict global weather changes relatively far into the future.”

In late fall, meteorologists predicted a La Niña for this winter. NOAA forecasts average precipitation but cold temperatures for the next three months in Northern and Central California; below-normal rainfall but normal temperatures in Southern California; and above-average rainfall in the Pacific Northwest. Check out the 90-day update here: www.cpc.ncep.noaa.gov/products/predictions/90day.

On January 1, Corinthian Yacht Club in Tiburon is offering the Resolution Regatta, a New Year’s Day pursuit race, saying that it “does not start till after noon, so even if you rang in the new year, you can ring up a splendid day in the water.”

In Marina del Rey, Del Rey YC’s Berger/Stein Series will begin with the Malibu & Return Race on the 8th.

The Singlehanded Sailing Society’s Three Bridge Fiasco pursuit race will be held on Saturday the 29th, with registration closing on Wednesday the 26th. As of this morning, it wasn’t open for entries yet. Last year the SSS limited it to singlehanders only; this year we expect that they’ll welcome back doublehanded entries.

Although their midwinter series races normally happen on the first Sunday of the month, Sausalito YC scheduled their January Chili Midwinter race on the 9th rather than the 2nd so as not to conflict with Golden Gate YC’s Seaweed Soup Midwinter, normally a Saturday series. GGYC had put their January race on the 2nd rather than on the 1st for obvious reasons. Now we get word that the January 2 GGYC race is postponed. GGYC is closed due to the spike in COVID cases. Got all that?

If you have a race on your schedule in January, we advise double-checking for schedule changes before you start building sandwiches and rigging up the boat. That said, most midwinter series that began in November and December will continue in January. (See our list in our monthly Calendar.) An exception is Encinal YC’s Jack Frost, which will take January off this year.

Oakland YC’s Sunday Brunch Series will begin as scheduled on January 2, but post-race gatherings have been canceled for the first two races. “The OYC Race Committee has decided that hosting an after-race event at this time would not be prudent given the surging COVID Omicron variant.” If more than the first couple of races don’t have post-race events, OYC will mail the prizes. They also warn against the king tides on January 2 and 30, and the full moon tides on the 16th, with max ebb right around the time of racing. OYC reminds racers to be careful if the wind is light and to carry a suitable anchor that can be deployed effectively.

The Corinthian Midwinters start next month, with racing on January 15-16 and February 19-20. CYC promises:

For much more, and to plan the year’s entire racing season, check out the 2022 Northern California Sailing Calendar and YRA Master Schedule, coming out tomorrow with the January issue of Latitude 38. Yacht Racing Association members already received theirs by mail in mid-December — a perk of membership.