Richmond Yacht Club hosted their annual Sail a Small Boat Day last weekend, and based on the following account from RYC’s Laurie Davis, the day was a great success.

Saturday, December 4, on the Richmond Riviera started out cold and overcast with the occasional zephyr drifting over the glassy waters at Richmond Yacht Club. Small-boat skippers and numerous volunteers were showing up for the 29th annual Sail A Small Boat Day, which the club hosts to introduce people in the Bay Area to small-boat sailing. It is open to people of all ages and abilities, no experience required.

By late morning the sun was out and a patchy breeze was trying to fill in. People looking for sailboat rides were checking in, getting life jackets, and lining up on the dock to try out boats. All attendees 12 and older were required to be fully vaccinated, and masking protocols were in place, but this didn’t dampen anyone’s enthusiasm.

This year the smallest boat was radio controlled, and the largest was a beautiful Alerion 28. Two Richmond juniors rigged a J/22 and several single- and doublehanded dinghies. The Ultimate 20, J/22, J/24, and Alerion were very popular with family groups, and the Mercury, VX One, Wylie Wabbit, and pink International 110 never stopped moving all day. The RS Aero, Laser, Byte and El Toro fleets splashed boats for people to try out, and there was also an Opti, RS Teva, Club 420, Flying Junior, and RS Feva on the water. As sailors do, skippers made the most of the light breeze. An International 14 even made a late appearance.

About 115 people showed up to try out boats, 43 of them kids. One girl who signed up said she wanted to sail every boat there; maybe she did! An octogenarian who was sailing for the first time said it was on his bucket list. One enthusiastic Labrador decided to go for a swim amongst the dinghies, and many people enjoyed a free hot dog lunch.

Several skippers and many of the other volunteers commented that their favorite thing about this event was seeing first-timers have the “aha” moment, realizing how much fun sailing is, returning with a big smile on their face and wanting to do more. That is, after all, the point!

As well as taking the above and dozens more photos of the Sail a Small Boat Day activities, Toshinari Takayanagi captured this time-lapse video of the comings and goings at the dock.

This month’s Caption Contest(!) photo was supplied by Sean Svendsen from The Boat Yard at Grand Marina, Alameda.

Warning: This is not a drill, folks. This situation is real!

On Sunday, December 5, Lisa Blackaller Williams cracked a bottle of champagne on the side of a new, and much larger, YRA buoy #16. The buoy is named after her father, Tom Blackaller, a two-time Star Class world champion, three-time America’s Cup competitor, and world-renowned sailor. Bill Dana, commodore of St. Francis Yacht Club, kicked off the ceremony. A series of toasts and roasts followed by former crewmates, including Ron Young, Ken and Kerry Keefe, Sean Svendsen, Ted Eden, Robin Moseley O’Connell, Fred Krauss, Bruce and Lynne Munro, Tom Ducharme, Russ Silvestri, Tad Lacey, Tony Chargin and Scott Easom. Scott also donated his time to paint and equip the new buoy with heavy ground tackle, to repaint and repurpose the old buoy as the Anita Rock offset, and to re-anchor both buoys.

Under the guidance of the St. Francis Sailing Foundation, the Thomas D. Blackaller Jr. Buoy Fund purchased the original 1989 buoy and this super-sized replacement. Event Toastmaster Ron Young announced that the ceremony, and a Zoom call featuring many of Tom’s famous competitors, will be edited into a special Wednesday Yachting Luncheon in early 2022. The project was the brainchild of two-time StFYC Sailor of the Year Bruce Stone. “Especially with our aging eyes,” commented Bruce, “we hope to make it a little easier to spot the Bay’s most famous weather mark and hopefully not overstand it.”

‘Overstanding’ was not the problem last Saturday, when racers in the Golden Gate YC Seaweed Soup Regatta took it to port and promptly drifted backward, swept up in San Francisco Bay’s attempt to empty out the morning’s king tide. We’ll have more on that in Racing Sheet in the January issue of Latitude 38.

Denis Marriott shot this short video of the buoy being splashed on Sunday:

Timing is everything! Our last Latitude 38 Spring Crew List Party was on March 5, 2020. At the party, Ron Young took the stage to announce the newly established Latitude 38 Wosser Trophies, created to encourage participation in racing. Immediately afterward all racing stopped.

Racing eventually stumbled forward in 2020. This past year, racing was almost back to normal, though with some reduced post-race revelry. And without a Spring Crew List Party.

We are reintroducing the trophies at the back end of the 2021 racing season to give this year’s racers one more chance to add to their already-bursting trophy cabinets. Actually, you have a shot at winning even if you never won a race all year. Ruth Wosser gifted these stunning, unique trophies to Ron Young and then to Latitude 38 to recognize Jake Wosser’s past achievements and future racers for both achievement and participation. The Wosser Trophies will be awarded as follows:

The trophies can be awarded to a single class or boat only once during any 10-year period. To win, sit down on this upcoming rainy Sunday and record the races you entered in the forms prepared by Laura Muñoz of the YRA. With this year-end announcement, we suspect entries could be light. Therefore, chances of winning are high. Your name and boat name could be on the first plaque of the first year these trophies are awarded. This also serves as an early notice for the awards in 2022.

This is your warning, preparatory and starting signal all in one. Head to your keyboards to recall and record all the great races and great people you sailed with this year. In the Corinthian spirit of racing, we’ll assume all entries to be accurate. Any ties will be resolved by the Advisory Council listed on the Wosser Trophies web page.

The 2022 Northern California Sailing Calendar and YRA Schedule will come out on December 30 with the January issue of Latitude 38. At that point, you can plan your racing schedule and draft crew to include the maximum number of sailors possible in the new year. If you’re looking to grow your crew, the Latitude 38 Crew List has more than 350 entries in a variety of categories. Good luck and happy racing in 2022!

Looking for a unique gift this holiday season? Look no further than Newport Boat Models. 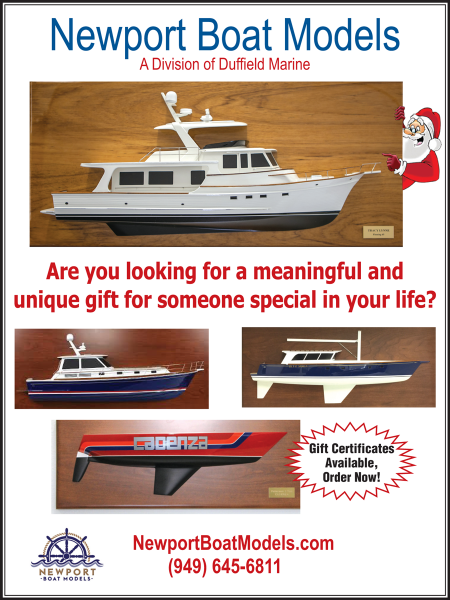 SHARE ON Tweet Share Email Linkedln
Receive emails when 'Lectronic Latitude is updated. SUBSCRIBE
'Lectronic Latitude: Wednesday, Dec 8
Weather Alert
Severe Storms Cause Flooding in Hawaii
Hawaii's small craft advisory remains in effect as "moderate to strong thunderstorms" move across the far southwestern offshore waters early this morning.
Sailing Stories
Tune In to Good Jibes with Lin Pardey
Listen in as Nicki and Lin talk about Lin's legendary life of sailing, giving back, and adventure.
Sponsored Post
Dump at the Pump with Division of Boating and Waterways’ ‘Pumpout Nav’ App
Find your nearest pumpout and floating restrooms with DBW's 'Pumpout Nav' app.
Wosser Trophies
Meeting Up — in Person — with the YRA
The Yacht Racing Association of San Francisco Bay welcomed their racers in person — and on land.
A Little Sailing Etymology
Tell Me a Tale About Telltales
"Does anyone know the true history of those pieces of yarn we poke through the luffs of our jibs to determine whether the sails are in trim, stalled, or luffing?
A Bonus for These Readers
Three New Golden Ticket Winners!
Congratulations to all our winners,. We look forward to seeing you out on the Bay sporting your new Latitude 38 gear.
More 'Lectronics »
Report Listing