On Friday, November 13, the former Cryer & Sons Boatyard building burst into flames, destroying “all but two corners” of the city-owned wooden building, according to the San Francisco Chronicle.

“A large amount of runoff and debris flowed into the Estuary,” the Chronicle added, “forcing firefighters to temporarily turn off their hoses while booms were installed to protect the Estuary and Bay. Once the booms were in place, crews resumed pouring water on the fire.”

Closed in 1989, the Cryer & Sons Boatyard came under the ownership of the Port of Oakland, which leased it to the City. Sitting at the end of Union Point Park, near Coast Guard Island and on the Oakland Estuary, the wooden boatyard building had been used for storage, but has been empty since August. The building was immediately adjacent to a sprawling homeless encampment that has taken over the shoreside Union Point Park for the last five-plus years.

“It was boarded up, red-tagged — declared unsafe for use — and encircled with fencing,” the Chronicle said of the wooden building. Despite continued efforts to keep people out, the Oakland Fire Department said that squatters occasionally camped inside the building. “The cause of the fire is under investigation ‘but it’s believed it potentially was caused by squatters,'” OFD told the Chronicle.

As we reported in November’s Sightings, the Bay Conservation and Development Commission, or BCDC, issued a cease and desist order to the City of Oakland requiring the removal of homeless encampments from Union Point Park. The park had been set to be partially cleared by November 15, with the remaining encampment removed by February 12.

This is just a small piece of a bigger story. After 18 years of loving our Ranger 33, Summer Sailstice, we’ve finally decided to move to another boat. A few weeks ago we closed on a 1989 Sabre 38 MkII. Despite working with Latitude 38 over the past 30 years, it’s not often we get into the details and paperwork of buying and selling or learning the systems aboard a new-to-us boat.

Some of the many differences between the two boats, besides being simply five feet longer and somehow a lot bigger, are the added systems and creature comforts of the Sabre. The Ranger was pure simplicity, with only a couple of yarns on the shrouds to help us figure out which way the wind blows. The Sabre is very well equipped with a refrigerator, inverter, chartplotter, cabin heater and more. Some of the more mundane but critical pieces of equipment are the thru-hulls — all 10 of them.

Sabres have a reputation for being solid, Maine-built boats, and it’s obvious, as we crawl around to learn how it all works. Unfortunately, one of the other solid things is six of the 10 thru-hulls that haven’t been rotated in a couple of years. The boat needs hauling for bottom paint, so now is the time to fix them.

Our question is, do you rotate all your thru-hulls regularly? How do you get frozen thru-hulls unstuck? Do you just replace them? Besides being frugal, we just don’t like filling up landfills with  ‘perfectly good’ stuff. They look well made and should be able to work again.

Besides getting all the thru-hulls unstuck we also have to find out where they all are. The good news is the previous owner left a very good layout with the location of each thru-hull. Every boat should have one of these aboard in an easily accessible and visible place. Do you?

Fortunately, all the thru-hulls are stuck open, so the ins and outs are working as intended. Sinks and scuppers drain and the engine cools, but that’s not very reassuring to us or our insurance company. Getting them working is at the top of our list of “things to do” as we learn about our new boat.  Figuring out all the buttons on the chartplotter will come at a later time. 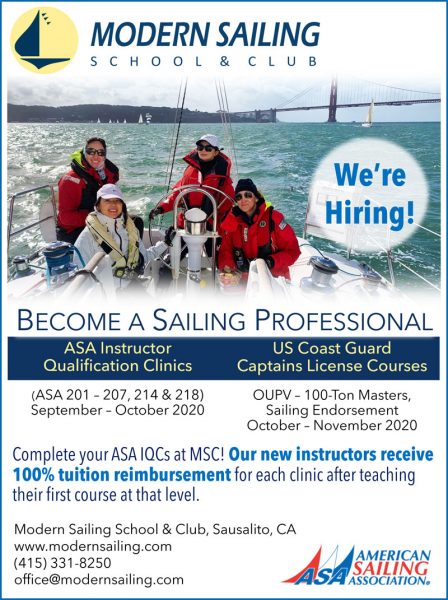 Kevin Escoffier, positioned some 550 miles southwest of Cape Town in the Vendée Globe solo nonstop around-the-world race, has triggered his distress beacon. He was racing his IMOCA 60 PRB in a strong southwesterly air stream on starboard tack behind a weather front. The 40-year-old Frenchman was in third place.

At 1346 hours UTC today, Escoffier sent a message to his shore team, explaining that he had an ingress of water into his boat. The rescue authorities (MRCC Cape Town and CROSS Griz Nez) are preparing an action plan in collaboration with his PRB shore team and the Vendée Globe race direction team. The closest competitor, Jean Le Cam on Yes We Cam!, has changed course to sail to the last position given by the boat when the beacon was triggered (40°55′ S, 9°18′ E). Le Cam is expected to reach the area at around 1600 hours UTC today.

Alex Thomson Is Out

On Day 20 of the race, Saturday the 28th, British sailor Alex Thomson had to withdraw. The starboard rudder of Hugo Boss sustained damage on Friday evening. This insurmountable problem occurred almost exactly one week after Thomson discovered extensive cracking in the longitudinal framing toward the bow.

He headed for Cape Town, 1,800 miles to his east-northeast, making around 7 knots under reduced sail on Saturday afternoon. His team announced that he is no longer racing in the Vendée Globe.

After making extensive remedial repairs to the bow, working through the nights of Sunday to Thursday last week, Thomson had just declared himself back in the race and at the gateway to the Southern Ocean. His IMOCA 60 was designed to be best in the fast downwind conditions in the ‘Big South’. He was in 15th place some 650 miles behind fleet leader Charlie Dalin on Apivia.

One of the two favorites to win this ninth Vendée Globe, Thomson placed third in the 2012-13 edition and finished second in 2016-17 after fighting back from being 48 hours behind eventual winner Armel Le Cléac’h at Cape Horn. In 2017 Thomson succumbed to exhaustion and came in 16 hours behind his French rival.

As of this writing on Monday morning, Charlie Dalin on Apivia is about due south of the Cape of Good Hope. He holds a comfortable lead over Thomas Ruyant on LinkedOut, 241 miles back. The majority of the fleet has now dipped into the Roaring Forties. Apivia is sailing in 30-knot winds on 15-ft seas. The top female sailor is Samantha Davies on Initiatives-Coeur in 11th place (after subtracting PRB from the standings). Fellow Englishwoman Pip Hare on Medallia is sailing in 22nd place (after also subtracting Hugo Boss). You may recall that we introduced our readers to Hare in the August issue of Latitude 38. Jérémie Beyou on Charal, another pre-race favorite, continues to try to catch up with the rest of the pack. He returned to Les Sables-d’Olonne early in the race to make rig and rudder repairs, but he was able to restart within the time allowed.

On Friday, after three days at sea on their first round-the-world record attempt, co-skippers Franck Cammas and Charles Caudrelier and crew interrupted their circumnavigation. The boat collided with a UFO on Thursday, rendering it impossible for the crew to sail the damaged trimaran Maxi Edmond de Rothschild at her full potential. The collision occurred when the 105-ft trimaran was running downwind at 30+ knots between the Azores and Madeira. The sailors turned toward home, 1,900 miles away in Lorient, France. Meanwhile, Thomas Colville and crew on Sodebo Ultim 3 have slipped south of the equator and continue on their quest for the Trophée Jules Verne. Team Gitana wished them well.

Did you pick up your copy of November’s Latitude 38 magazine this month? Len Cardoza did, and he found a Golden Ticket inside!

As a retired US Army Corps of Engineers LTC, Len was always appreciative of friends sending him new Latitude 38s whenever he was deployed.

Len is a member of Oakland Yacht Club — which is where he gets his monthly issue — and he sails his Catalina 380 Edelweiss whenever he can.

The December issue is just around the corner, so keep an eye out for yours in the mail (subscribe here), or pick one up at your local distribution point.

SHARE ON Tweet Share Email Linkedln
Leave a comment
Receive emails when 'Lectronic Latitude is updated. SUBSCRIBE
'Lectronic Latitude: Wednesday, Nov 25
Crewed Record Attempt
Jules Verne Impromptu Race Around the World
Two 105-ft foiling maxi-trimarans have slipped away under the cloak of darkness to join the fun. Departing their docks in France overnight…
Sail Through Thanksgiving Weekend
Will You Choose #optsailing for Blue Friday?
Welcome to Thanksgiving 2020! We've given our crystal ball a spit and polish to look at the coming weekend's sailing conditions.
Sponsored Post
Custom Multihulls from Gold Coast Yachts
Whether you need a power catamaran to support your day charter business, a luxury sailing catamaran, a commercial passenger ferry, or anything in between, we can build it.
News from the SailGP League
SailGP to Skip the US in 2021
On Monday, SailGP announced an updated schedule for the first half of its second season. The opening events will now happen in Bermuda and Taranto, Italy.
Racing in Goldilocks Conditions
Berkeley Yacht Club Midwinters Kick Off
It was almost 'Goldilocks' weather for the Berkeley Midwinters — not too hot, not too cold, but juuust right! The sun was shining, the air was clear and breathable, and there was wind.
Let us bring Latitude to you
The Gift that Keeps on Giving
Our Shelter-in-Place special is back for the winter. Get Latitude 38 delivered to your home for January, February and March, and sip on whatever you like.
More 'Lectronics »
Report Listing