We recently received the following report on the improving status of South Pacific cruising from Pacific Puddle Jump ringleader Andy Turpin. Andy has been ‘sheltered in place’ for the past six weeks aboard his Cross 42 Little Wing in Nuku Hiva. Andy’s report:

Yesterday, in a joint statement by the President and High Commissioner of French Polynesia, it was announced that the ban has been lifted on traveling between islands and atolls of the territory’s five archipelagos. This means, for example, that cruisers who have been confined to their boats in the Marquesas Islands may now travel freely to any island in that archipelago. However, it does not mean that boats now in the Marquesas can also cruise the Tuamotus, Society Islands, etc. But there are indications that all restrictions on inter-island travel may be lifted soon.

That said, there are still some very fundamental policy decisions to be made by politicians and administrators regarding this year’s fleet of visiting international yachts — including members of the Pacific Puddle Jump and ARC World Rallies. As many of you know, since mid-March French Polynesia has been allowing boats to make landfall on a case-by-case basis, in order to make repairs, fuel up, and reprovision, functioning essentially as the only available harbor of refuge in the area. Most island nations to the west simply closed their frontiers to new arrivals when the COVID-19 threat spread worldwide.

We anticipate, however, that these administrative issues will be sorted out very soon. We are told that marine industry representatives are working hard to insure that government policymakers understand that: A) All visiting cruisers have proven their good health through weeks-long quarantines while at sea and at anchor; and B) Not only are cruisers eager to spend money on shoreside goods and services, but in the absence of cruise ships, income from cruisers may be more important this year than ever.

Here in the Marquesas — where I am writing you from my boat Little Wing — some boats that had cleared in before the lockdown are beginning to up-anchor and explore neighboring islands.

Others opted out of the uncertain state of limbo here and sailed on to Hawaii to wait out the pandemic and reassess their options.

Now that the peak of the crisis appears to have passed, we will keep you informed of additional developments and policy changes. We are very happy to finally have some good news to report!

Latitude would like to know, where have you been sheltering? Because reactions to the pandemic accelerated at precisely the time when Pacific Puddle Jumpers would normally have been starting their passages to Polynesia, fewer than half of the registered PPJ boats have made the crossing, wisely opting to stay put in a safe place and monitor developments in the islands.

We know about all the PPJ boats who passed through Nuku Hiva, but we are very curious to know about the rest of you. Please tell us:

Now that the idea of inter-island cruising is looking a bit more possible in the weeks ahead, we’re sure that some of you will consider making late-season crossings.

Such decisions are yours alone to make. We would encourage you to do your homework, however, and consult with knowledgeable sources, be they highly-experienced friends or professional weather gurus — especially if you will be traveling in northern latitudes, where the Eastern Pacific hurricane season has begun.

Every year there are a few stragglers within the PPJ fleet, who, for whatever reason, are not able to set sail until late May, June or even July. Last season, for example, Michael Berry of the San Francisco-based Passport 42 Peregrine set sail from his homeport on July 10. He arrived in the Marquesas 49 days later, unharmed but weary, having dodged a tropical storm and two hurricanes along his route.

While he probably wouldn’t try to talk anyone out of following in his wake, he would discourage them from crossing during that timeframe in anything but a heavy-displacement, bulletproof boat like his.

Frequent reports from PredictWind were ample and accurate during Michael’s trip, but if he had it to do over again, he’d probably also consult a professional weather-routing service, especially for long-range planning.

Wherever you are, we hope you are healthy and safe. And we hope to see you out in the islands eventually.

Here’s your May Caption Contest(!), shot by Latitudian Mark Bettis.

Please comment below, and be sure to check the June issue of Latitude 38 for the winner.

The 2014 Beneteau Oceanis 41 Scarlet Fire is offered by Deborah Reynolds of Passage Nautical.

We profiled Jesse Andrews in Monday’s ‘Lectronic Latitude. Now we’ll continue our discussion with Jesse. He’s been an assistant coach for the University of Hawaii’s Rainbows for 23 years, after completing an All-American sailing career at the UH Manoa campus. In his spare time Jesse is also the sailing director at Kaneohe Yacht Club, as well as being a husband and the father of two active, athletic kids.

Last year Jesse was one of three inductees into the Intercollegiate Sailing Association (ICSA) Hall of Fame. He also received the Graham Hall Award, which recognizes “organizers, administrators, advisors, or coaches in a professional capacity who have served the best interests of college sailing at the team, conference, or national level.”

Since sailing is such a big part of my life, I love sharing my passion with the kids and young adults. I’ve had the pleasure of coaching kids at Kaneohe Yacht Club as youths all the way up to college sailing at UH. Seeing them mature from groms to young adults who still enjoy sailing and becoming members of our sailing community is really rewarding. I now have a second-generation sailor in my program since I’ve begun.

The great group of members at KYC have supported the sailing program over the years and really helped make it a premier racing program. Working with others, learning the rules and how to be a good sportsman, seamanship, boat maintenance, planning events, preparing mentally and physically for events are all key preparation that transfer to successful skills in life. Challenging your brain to understand mechanics and engineering tasks like adjusting rigging to optimize for wind conditions is practical learning and gives tangible rewards. Sailing gives people so many lifetime qualities, friends not just locally but globally, as we all know how tight sailing communities are.

What’s your favorite thing about sailing or why do you sail?

Along with the great social aspects of sailing, I am really competitive. Sailing is unique because it is such a complex and mental sport. Being keen at observing all the little things translates to success. You will always see the best sailors standing up in the pre-start looking for wind and doing all the homework on the start and first beat. I always stress for racers to get out early and sail the course and do a few practice starts. This is key for getting insight and confidence for the first race. Also learning from race to race what you’re doing well and what needs to be improved is crucial. The tactical aspect of sailing and team racing is the most fun for me. Trusting your intuition and balancing risk and reward is something I am still learning more of every year. Being mentally confident from years of practice and coaching helps, especially as a tactician or just racing day to day.

What is the best thing about sailing in Hawaii?

We are lucky in Hawaii and in California that we don’t have much of a down season, and we are blessed with consistent winds ideal for foiling on flat water in the bay. Growing up in Connecticut, I would drive to Newport to race Lasers in the middle of winter and chip ice off the decks to keep the weight down. We would also get a few good days a year to iceboat, which is one thing I miss doing. But I’ll take foil-sailing in 80° temps in February over frostbiting and iceboating. The foil is really revolutionizing our sport. It’s really breathing new life into windsurfing and also keeping kids involved who were getting bored with traditional racing. Our newest endeavor is growing a fleet of Waszps, thanks to the help of Kaneohe Yachting Foundation. We have about 10 kids who are super-competitive with each other in Waszps, and they’re really enthusiastic. We are all learning new skills. It’s tricky to keep the boat balanced and anticipate weight movement, but it becomes intuitive with more time in the boat.

One thing we can really appreciate during these times is what a great sport and lifestyle we sailors have, with such ideal conditions here and in California. I look forward to doing another San Francisco Bullship soon, and possibly watching some Hawaii Waszp sailors in next year’s SailGP in San Fran!

We also have a talented group of local sailors racing Cal 20s. This year our Kaneohe Yacht Club team won the two annual Hawaii Sir Thomas Lipton Cup events. One is sailed in Cal 20s and the other is PHRF. We also race a little PHRF with our Hobie 33 and a friend’s Melges 24 and 32. There are a few distance races that I enjoy sailing in, one to Kauai and another from Maui to Oahu over Labor Day Weekend. The Hobie and Melges 32 are both super-fun downwind boats to race. We sailed the Melges 24 once back when we had an inter-island ferry to ship it over to Maui. That was a fun sail back to Oahu in 15-25 knots of wind!

National Safe Boating Week runs Saturday, May 16, through Friday, May 22. It’s the annual reminder to encourage recreational boaters to embrace safety all year long. However, the usual recommendation urging lifejacket wear is now joined by an equally important message — how to stay safe during the time of COVID-19.

“While we’re learning new things about the virus almost every day, we don’t anticipate additional safety challenges on the water this year,” said BoatUS Foundation for Boating Safety and Clean Water president Chris Edmonston. “We have a responsibility to look out for all of us sharing a launch ramp, marina or boat club dock as well, as those assigned to keep us safe on the water or entrusted with the care and maintenance of our boats.” 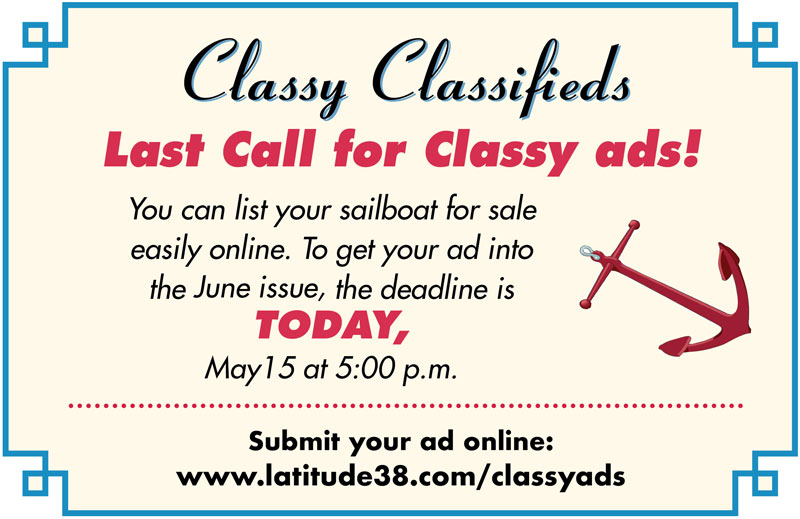 Submit your ad today for the June issue!

SHARE ON Tweet Share Email
Leave a comment
Receive emails when 'Lectronic Latitude is updated. SUBSCRIBE
'Lectronic Latitude: Wednesday, May 13
Inland Cruising Rally
Delta Doo Dah Dozen Kicks Off This Saturday
Sailors and other boaters are already out there doing their thing in the Delta. A do-it-yourself Delta Doo Dah is not really a problem.
Good News from Solano and Contra Costa Counties
YRA Takes First Steps to Resume Racing on the Bay
Racing on San Francisco Bay could resume in the next few weeks.
Sponsored Post
Satellite Phone Store
Satellite phones provide voice, SMS and data services anywhere on the Earth and you don't have to rely on cell phone networks.
A Question for the Nation
What’s the Sketchiest Harbor You’ve Ever Sailed Into?
On my last day in New Zealand, we took a long drive. After weeks of lingering near a marina and industrial hub, a drive — and the proverbial stretching of the legs — was welcome respite from the quarantine routine of long walks to the grocery store.
Virtual and Actual Sailing
45 Knots in Paradise
Last week, reader Jeff Berman sent us these images of a recent Zoom gathering he attended. "We had a contest for best background. I won!"
More 'Lectronics »