In February, a California lawmaker introduced a bill recommending targeted reforms to the Bay Conservation and Development Commission, or BCDC. On Wednesday, bill AB 2809 — which was introduced by Assemblymember Kevin Mullin — will be up for discussion in Sacramento. The public is encouraged to participate (please see below for links to the hearing).

In 2018, Mullin led a bipartisan effort to audit the BCDC. Last year, the Auditor of the State of California found that the “BCDC has failed to perform key responsibilities . . . to protect the San Francisco Bay and the Suisun Marsh.”

Last week, the BCDC voted to “oppose unless amended AB 2809 due to its lack of a funding stream,” the commission said on their website. Bob Wilson, the co-founder of the SF Bay Stewardship Alliance, a group that’s been working to reform the BCDC, said, “The State of California is facing a $50 billion budget deficit. [BCDC] has had assurances that [AB 2809] would not cut their budget.” Wilson added that the BCDC has been reluctant to embrace reforms suggested as a result of the audit.

AB 2809 will require within the next fiscal year “That the commission create and implement procedures to provide managerial review of staff decisions in enforcement cases, timelines for resolving enforcement cases, and a penalty matrix for assessing fines and civil penalties.” The bill would also require the BCDC to complete a review of the Suisun Marsh Preservation Act of 1977 by July 1, 2021.

Finally, AB 2809 would prohibit the BCDC from using money from the Bay Fill Clean-Up and Abatement Fund — a coffer built in part from violation fees levied against permit holders — to pay for the commission’s staff salaries or enforcement actions. The fund is meant to be used for “removing bay fill, resource enhancement, or performing any other remedial cleanup or abatement actions,” according to the bill.

“We just think the BCDC needs to change leadership and adopt a different method of governance,” Wilson said.

After Roy Disney’s modified Volvo 70 Pyewacket took first in its division in the PV Race in March, the sailing world suddenly hit the world’s largest wind hole. There isn’t a regatta on the horizon for months. The highly-anticipated Tahiti Transpac — which Pyewacket was keen to sail in — suddenly vaporized, and all crews were stuck in the stay-at-home doldrums.

So what now? It was nice to get the following note from Olympic medalist and Pyewacket program manager Robbie Haines: “I’d like to thank you for sending Roy and me your great magazine monthly. We both really look forward to getting it.”

We asked Robbie if we could pass those thoughts along, and he replied, “No problem. We would be happy to do whatever we can to help such a quality magazine that supports our sport. Cheers, and keep up the great job you and your team are doing at Latitude 38.”

Thanks Robbie and Roy. We know they would much rather be getting Pyewacket ready for the now-canceled Transpac Tahiti 2020 but, in the meantime, we’re happy to know Latitude makes a small contribution to the giant hole in their sailing schedule.

We’re all looking for that next fresh breeze, so Pyewacket and everyone can get back out there soon. Summer is coming. 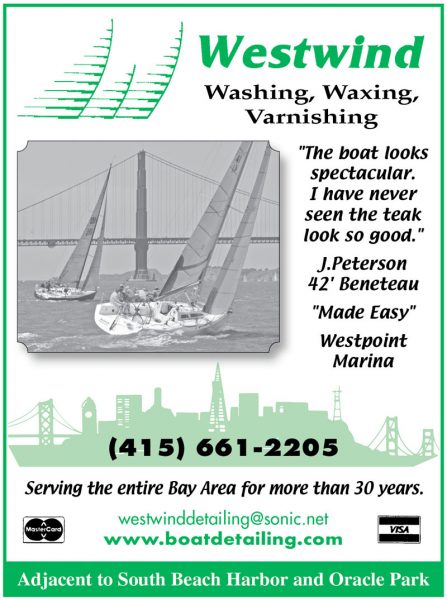 Where did you grow up sailing?

I grew up in Noank, Connecticut, an old shipbuilding village at the mouth of the Mystic River. I was 11 years old when I learned to sail. It was a relatively late start. My parents signed my sister and me up for a Dyer Dhow sailing class at the Mystic Seaport that spring of 1985.

The small singlehanded dinghies were a great way to learn, I picked it up quickly and was hooked! My dad also inherited an 18-ft Marshall Catboat from my grandfather, and we sailed it from Maine to Connecticut together that same summer. I started racing at Ram Island Yacht Club in Blue Jays each summer, and raced the Essex Frostbite Series on the Connecticut River in the off-season. The spring series was challenging, with ice floes and strong current — that was before we had drysuits.

Who taught you to race?

I’ve been coached by many great sailing instructors, but there were a few who motivated me early on and introduced me to the racing scene outside our local area.

Bob and Salle Evelyn were my neighbors growing up. They lived on the water and let us keep a couple of Sunfish on their dock that my sister and I sailed in Beebe Cove. They started Formula Yachts, and Bob designed ultralight keelboats and invited us to race with them in weeknight racing, and in events like Off Soundings and Block Island Race Week. Bob was a great mentor and he introduced me to big boat sailing.

Tucker Bragdon was the sailing coach at the Coast Guard Academy in New London back when I was in junior high school. He invited my sister and me to practice with the Coast Guard cadets after school. Racing in a larger one-design fleet of Flying Juniors and Lasers helped me improve my skills, doing a lot of drills and starts was great preparation for college sailing!

When I was 15, we started racing International 420s out of Ram Island Yacht Club. Bill Healy and Adam Walsh were sailing 420s on the ‘circuit’ and coached us for two summers. They gave us all the tools we needed to qualify for the 420 Worlds when I was 15. For the next four summers, I got to race with some of the best youth sailors in the world in France, Italy, Israel and Australia.

College sailing opened up another level to me in the sport. I was a long way from home when I made it to Hawaii, and Andy Johnson, the head coach of UH, was one of the main reasons I stayed. We had great support from UH as a team. Flying back to the mainland for regattas and promoting events to get other teams to travel to Hawaii was no easy task. But we grew the sailing program and had some great success! I am honored to have worked with him as a coach for the past 20 years.

What kind of sailing do you do now?

Although I love sailing keelboats and long-distance racing in the Hawaiian Islands, I still really enjoy small-boat sailing. Kaneohe Yacht Club has a fleet of El Toros that are great for both adults and kids. I race competitively at 170 lbs against my kids who are barely 100 lbs, and it’s a great way to spend time with them on the water. Last year my son beat me in our Bullship Race, which is a two-mile racecourse around Coconut island in Kaneohe Bay. Coaching the UH Sailing Team also keeps me connected to my dinghy-sailing roots.

Look for more about Jesse Andrews and the extremely successful Kaneohe Yacht Club Junior Program in a future ‘Lectronic Latitude.

The board of the Singlehanded Sailing Society had been hard at work right up until Friday to make the Singlehanded Farallones Race happen. They’d had it on the schedule for this coming Saturday, May 16. After all, social distancing is not a problem aboard a boat occupied by only one person.

“After discussions with the YRA and USCG, the SSS must postpone the upcoming Singlehanded Farallones,” announced the SSS board. “The race will not meet current COVID-19 safety guidelines from all of the Bay Area counties, and a permit has not been issued by the USCG. Dialogue is ongoing to reschedule in June. We will keep you posted as we learn more about the possibility of any upcoming SSS races.”

We announced previously that the SSS has moved this summer’s Singlehanded Transpacific Yacht Race (SHTP) to next year.

(Note: This paragraph has been updated. – ed.) Meanwhile, down south in Marina del Rey, the Pacific Singlehanded Sailing Association sailed their first race since the shutdown began. On Saturday, six boats started and three finished the Santa Barbara Island race. PSSA’s Shaka Challenge, scheduled to start on June 27, the same day as the SHTP, is still on the books. But only two boats have entered.

An Update from the El Toro International Yacht Racing Association

“Fremont’s Lake Elizabeth continues to be closed,” advises the Bull Session, a newsletter emailed to El Toro sailors. That means no Fremont Relays next Sunday. The Clear Lake Regatta scheduled for June 20-21 “has been canceled because the facilities on the lake to support the sailors are closed. The June Junior Sail Camp in Stockton Sailing Club with Richmond Yacht Club has been canceled. It is no wonder why Half Moon Bay Yacht Club and the El Toro Class has rescheduled 2020 HMBYC El Toro National Championship. We are very lucky that Half Moon Bay YC can fit the El Toros into their schedule for next year on July 30-31-August 1, 2021.”

See https://eltoroyra.org for more about sailing and racing El Toros.

On Saturday, West Coast Multihulls sent out this message: “Well, this comes as a very welcome surprise. After fits and starts, the San Diego Port Authority has chosen to open San Diego Bay to boating of all kinds, including sailing charter operations like WCM. We have the specific go-ahead from the Harbor Police, and we’re so happy!”

You may recall that the Port closed San Diego Bay to all recreational water use on April 4.

Not only is the Delta Doo Dah Dozen cruising rally on for 2020, boats are already out there doing it.

We’ll host our official kickoff this Saturday, May 16, via a Zoom meeting starting at 6 p.m. We’ll send all entries an invitation to Zoom in, so be sure to sign up by Friday. It’s quick, easy — and free. But if you’d like to spend some of your economic incentive dough, we encourage you to order an official burgee and hat. Supplies are limited!

Check back here on Wednesday for more info about the kickoff and other Delta Doo Dah news.

SHARE ON Tweet Share Email Linkedln
Leave a comment
Receive emails when 'Lectronic Latitude is updated. SUBSCRIBE
'Lectronic Latitude: Friday, May 8
Rules of the Road
What Does Five Horns Mean?
The Coast Guard recently cited the skipper of a 25-ft sailboat for "negligent operations" after they crossed in front of the bow of a 550-foot tank ship while transiting a narrow channel near Stockton.
Schedule Adjustments
Delta Ditch Run and More Racing Updates
"We have had to tack and regroup. As a result, the 30th annual Delta Ditch Run has been postponed till June 12, 2021."
Sponsored Post
Mazatlan Marine Yacht Sales
Mazatlan Marine has four locations throughout Mexico to serve you: La Paz, Mazatlán, San Carlos and Puerto Vallarta. Come on down and find your dream boat!
Stuck Between Closed Countries
Stranded Sailor Finally Makes Landfall in Fiji
During the coronavirus pandemic, borders around the world have been shut to cruising yachts with precious few exceptions. One recent deviation from this rule, however, was that of 59-year-old Singaporean solo sailor Wong Tetchoong.
The Book That Got me Hooked on Cook
Sailing and Stumbling Through History
Captain James Cook’s exploration of Aotearoa, or New Zealand, might be most significant for what wasn’t found: the fabled Great Southern Continent.
Sponsored Post
Denison Yachting Virtual Boat Show
Denison Yachting kicks off a four-day virtual boat show today, May 8, from 10 a.m. to 6 p.m. Experience the boat show features you love.
More 'Lectronics »
Report Listing