Holly Williams is a surgeon. She’s also a sailor, but since her med school days at UCSF in the late ’80s, it seemed she would have to choose: her career or her sailing. Her career as a surgeon in San Francisco meant that her dream of sailing around the world would have to wait until she retired.

Fast forward to 2020, and Williams is stranded at a Philippine dock under strict government surveillance (from early February until March 19, 2020) for six weeks in the early days of the COVID-19 pandemic. She’s not retired, but she finds herself on a nautical adventure far from home.

And now it’s November 2022. At the time of our interview, it had been only a month since Williams crossed the finish line of the 2019-2020 edition of the Clipper Round the World Race, two years delayed. She’s still not retired, and she has managed to sail around the world. This is her adventure.

Williams got her start sailing small boats, mostly dinghies. “I started doing classes at South Beach, and eventually took lessons at Modern Sailing to be able to charter boats and take people out,” she explains. “But I stayed on in the Bay to do my surgery residency. That was really time-consuming, and I couldn’t charter. Nobody I knew had the same schedule. But I knew — if I buy a boat and live on it, I could make it work.

She bought a 1979 Catalina 30 named Gypsy Heart and was an unofficial liveaboard in sunny Sausalito Yacht Harbor through her residency from 1994 to 1998. Her logic: “I’m a surgeon; there’s no time to sail around the world.” So she sailed around the United States. Williams found  Chesapeake Bay during a few years living in Baltimore, but was back on San Francisco Bay in 2014. She landed in Emeryville and has been based there ever since. “The difference between an adventure and an ordeal is attitude,” Williams quips. She had found the opportunity to go with the Clipper Round the World Race — she could sail the world in only 11 months! Turns out, the right stuff for this race just means you need the right attitude. Clipper trains you, and with grit and endurance, the rest is up to fate. Williams’ application and interviews were accepted. “I guess they determined that I was the right stuff, that I’d be able to live on the boat with other people for a long period of time with limited privacy.”

It was off to the races. Williams left her full-time job and arranged part-time work to make sure she had a position to return to after the race. Not a strict amateur, Williams was going into the global race with ASA 103-110 certificates and delivery experience. “I signed up for the four weeks of training that you do in England. I did that when I had vacation time off in 2018-19. I was still working full-time.” A real blending of her two passions, Williams was on the UNICEF boat and loved sailing for a cause that was so defining in her life. “We got to do a lot of cool stuff with UNICEF at stopovers. We could use this boat like a billboard for UNICEF at every port. For example, we took one of our sails and had a table where people could sign a message on the sail for a small donation.” The UNICEF initiative with Clipper Ventures made one million pounds between the 2017-2018 edition and the 2019-2020 edition.

So, how did Williams find herself stranded in the Philippines?

Continue reading in this month’s issue of Latitude 38.

San Francisco native Dee Smith won the regatta. Dee scored first in the Disabled Division and was the top Grandmaster. His worst finish was a third, which he threw out to count all bullets. Smith was well known as a tactician, Whitbread racer and America’s Cup competitor. He survived lung cancer, but came away with damage to his spine. He now lives on the East Coast. Latitude 38’s Rob Moore profiled him back in 1998. Smith has been competing in the 2.4mR, a 13-ft, 8-in one-person keelboat, since 2015.

On Day 1, the race committee got in four races in anticipation of Nicole. The leading edge of the tropical storm dumped heavy rain on Race 4.

Although Hurricane Ian spared Tampa in October, the late-season Nicole did not. On Day 2 of the regatta, volunteers from DIYC helped to haul out all the boats.

The sailors launched again on Friday morning. They needed two more races to get a throwout. The first race started on time, but a line of thunderstorms developed suddenly and the RC shortened course after two legs. The boats returned to shore. In the afternoon, the boats ventured out to the course for Race 6. The final race followed a postponement for lack of wind and two general recalls.

See more information and check the full results at https://yachtscoring.com/emenu.cfm?eID=15018. Finland will host the 2.4mR World Championship in 2023. 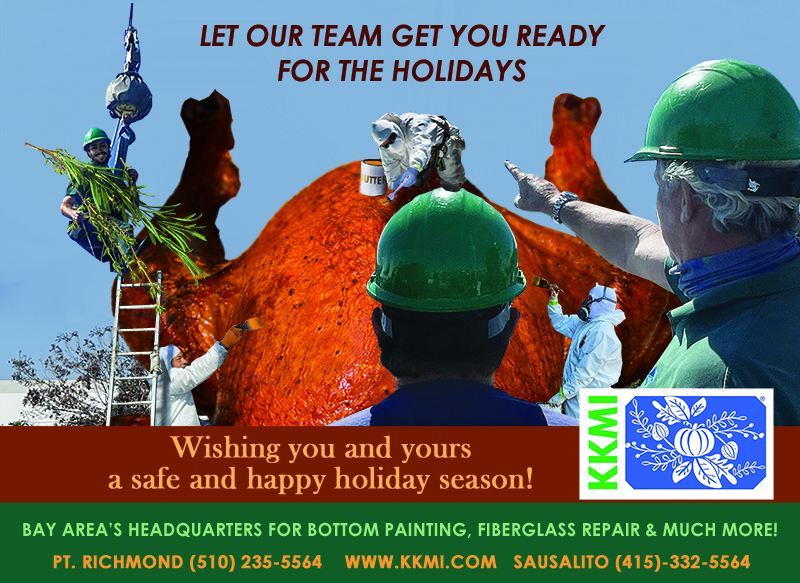 After the recent rains, we received news from the Turtle Island Restoration Network of coho salmon returning to Lagunitas Creek in Marin. While we love seafood, we can’t say we’re as keen to go fishing ourselves. Either way, we always love to hear of a species making a comeback. The restoration of Lagunitas Creek and other conservation efforts are making a difference, so today you can drive out to see them migrating in Marin. It’s currently illegal to harvest the endangered coho salmon, but maybe someday fishermen will be able to fish for them again. The story caught our eye while we were reading Jack London’s short book Tales of the Fish Patrol, which was our test purchase from Latitude 38‘s new online bookstore. A great read. When we’re done reading, we’ll mail it to the first person who sends their mailing address to [email protected].

London’s book is a reminder that wildlife conservation efforts have been underway on San Francisco Bay for well over a century. In the late 1800s, Jack London chartered his sloop Reindeer to the Fish Patrol on San Francisco Bay to protect what were already perceived to be endangered species. The list of fish and shellfish he and the Fish Patrol were aiming to protect included sturgeon, shrimp, and oysters. (Oyster Cove Marina — currently on the “endangered marinas” list — and Oyster Point Marina are a tribute to that era.)

Their pursuit of illegal fishermen was all done under sail within an area from the South Bay up into the Delta. It was a dangerous job facing off against fishermen who were occasionally armed and dangerous. Apparently, all that effort only slowed the demise of those species.

“It’s an incredible spectacle to watch these fish leap waterfalls, hear them splash around as they maneuver up shallow riffles, and witness the hooked-nose males fight for the opportunity to fertilize the female’s eggs in the nest she builds and protects until death,” said Ayano Hayes, watershed biologist for SPAWN. “This is the part of their epic journey of coming home, as these fish left their natal streams a year and half ago for the ocean as cigar-sized fish. The ones that have survived their ocean phase are now migrating back as two-foot adults after only 18 months at sea.”

The Turtle Island Restoration Network goes on to report, “Locally, wild coho have experienced perilous declines over the past five decades. Historically, as many as 5,000 nesting females have laid eggs in the Lagunitas Creek watershed of Western Marin County each fall. But today, only 500 fish on average return each year. Many coastal streams in the Bay Area once supported coho salmon and provided sustenance for both people and wildlife. Yet Lagunitas Creek is considered a stronghold, since most streams in California are too urbanized or polluted to support this species. Now endangered, it is illegal to harvest coho salmon in California.”

This also reminds us of another sailor: Randy Repass, founder of West Marine, who has also dedicated many years to protecting sealife, most recently as chair of the board of the Golden State Salmon Association. Randy, his wife Sally Christine Rogers, and son Kent Harris have been circumnavigating in stages aboard their Wylie 66 Convergence for over a decade, but that hasn’t deterred Randy from taking care of his home waters when he returns from the sea.

It wasn’t easy to protect the Bay and oceans from illegal fishing in Jack London’s day, and though ocean management is vastly improved in California’s coastal waters, it remains a huge challenge in the world’s oceans. Additional resources are plentiful, including the new podcast, The Outlaw Ocean, which is the global version of Jack London trying to police fishing outlaws on San Francisco Bay. We were also recently sent a well-researched article by YourBassGuy.

The positive news on Lagunitas Creek seems small when compared to the scale of the global problem. However, that didn’t stop Jack London. His Tales of the Fish Patrol demonstrates the perseverance of sailors when faced with long odds. Over a century later, these efforts continue and are bearing fruit.

Thanksgiving is in 10 days’ time, and right after that comes Christmas. At least that’s how it feels. But before the fat, jolly guy in a red suit sails his way around the Bay, we get to enjoy the wonderful, once-a-year lighted boat parades. We’ve already had word from organizers about the Oakland Yacht Club and Encinal Yacht Clubs’ joint event, the 46th Annual Lighted Yacht Parade.

The parade is a charity event raising money for Oakland Firefighters Random Acts of Kindness and Alameda County Food Bank.

Last year the parade attracted a record number of boats, and the clubs were able to donate several thousand dollars to their nominated charities along with toys and canned goods that had been received from various locations.

The committee is excited about this year’s event and believes it will, again, be “big.”

This year’s theme is “Holiday Music,” and there are already more than a dozen boats signed up. If you’d like to join them, get the details and register here: Lighted Yacht Parade.

SHARE ON Tweet Share Email Linkedln
Leave a comment
Receive emails when 'Lectronic Latitude is updated. SUBSCRIBE
'Lectronic Latitude: Friday, Nov 11
New!
Visit Latitude 38’s Independent Online Bookstore
From fiction to nonfiction, classics to underground favorites, history and how-to's, navigating and maintenance, racing and cruising, triumph, tragedy and the joys of cruising, there is something for every sailor and every season.
The Fun Has Just Begun
Twenty-Eighth Baja Ha-Ha Fleet Arrives in Cabo San Lucas
It was a blissful sail south for the 100+ cruisers in the 28th Baja Ha-Ha. Accompanied by a full moon, an eclipse and warm breezes, the fleet revelled in idyllic sailing conditions.
Sponsored Post
Quality Yachts With Premium Service From Swiftsure Yachts
Swiftsure Yachts offers exceptional service, quality brokerage boats and new yachts for world cruising.
The World Famous L38
Caption Contest(!)
Ouch! Here's this month's Caption Contest(!). No need for us to say anything; the comments will say it all.
Solo Transatlantic Race
Route du Rhum Sets Sail From Brittany to Guadeloupe
The record-breaking fleet of 138 solo sailors have now been at sea for about 48 hours in the 12th edition of the Route du Rhum.
Royal Visits
Sailing Legends Brad Butterworth and Josh Belsky Visit Monterey Peninsula Yacht Club
It's not every day that international legends of sailing visit your local club. Monterey Peninsula Yacht Club gave a warm welcome to two of them.
Sponsored Post
San Francisco on the Bay: “The List”
Discover San Francisco Bay and all that inspires those of us who live or visit here.
More 'Lectronics »
Report Listing