The big question marks going into Sunday, the fourth and final day at Rolex Big Boat Series, had to do with the weather. How wet will we get? Will the gale hold off? What courses will the race committee choose in the southerly? Will the club still hold the awards ceremony outdoors as planned?

High winds came and went with the squalls, but the direction was mostly from the south with a soupçon of east. In the southerly, the water on the Cityfront was remarkably flat — in stark contrast to that on Richardson Bay to the north, as we see elsewhere in this edition of ‘Lectronic Latitude. The schooners at least didn’t mind their reaching start off the St. Francis Yacht Club race deck. The Classics got the same 11.7-mile course as they did on Thursday.

Video shot by Christopher Lewis aboard the schooner Mayan.

The rain did indeed soak the sailors. But, what the hey, the rain washed off some of the salt. (Even the streets were foaming with the stuff.) Thankfully, the awards moved indoors. The exuberant celebrants packed the clubhouse more tightly than folks are accustomed to in COVID times — but the StFYC opened the doors for fresh air, and at least we weren’t out in the rain and wind and mud.

We’ll have much more from the Rolex Big Boat Series in the October issue of Latitude 38, coming out on Friday, September 30. In the meantime, check out the results here.

Finally, it rains. With it comes some relief from heat, drought and fire, though on the Bay, it can make life challenging. Our normally sunny September weekend was disrupted by a rainstorm, giving us a sunny Saturday, stormy Sunday, and a brilliant Monday morning. We’ve been staying on the Sausalito waterfront the last few days and caught some of the action.

After a sunny Saturday enjoyed by racers in the Rolex Big Boat Series and sailors all over the Bay, an unusually strong, wet storm for September started rolling in on Saturday night. By Sunday morning the rain was falling, and classic strong southerlies started terrorizing Richardson Bay, while challenging the RBBS race committee to find courses suitable for sailors on a Bay that lives around westerlies. The storm dropped about an inch and half of rain in Marin, and racers reported seeing 35-knot gusts and 20+ knots on knotmeters.

Life on the water’s edge or on the Bay is about as close to nature as you can get in a densely populated urban area. Apps give you an approximation of what’s coming, but it’s not until you pop your head out of the hatch, don the foulies, or hoist an anchor and reefed sail that you feel the reality of what digital screens attempt to convey. Not everyone would have enjoyed being on the Bay all weekend, but the grins on Rolex Big Boat Series racers’ faces on Sunday afternoon affirmed that many loved it. Others find the right sailing condition for them at other times.

We’ve been praying for rain; we got it. We hope everyone fared well as the storm passed.

This might have been the early-warning storm to remind us all that winter is coming and we should all remember to check dock lines, chafing gear and fenders before the winter season sets in. Before that happens there are many more sunny sailing days ahead. 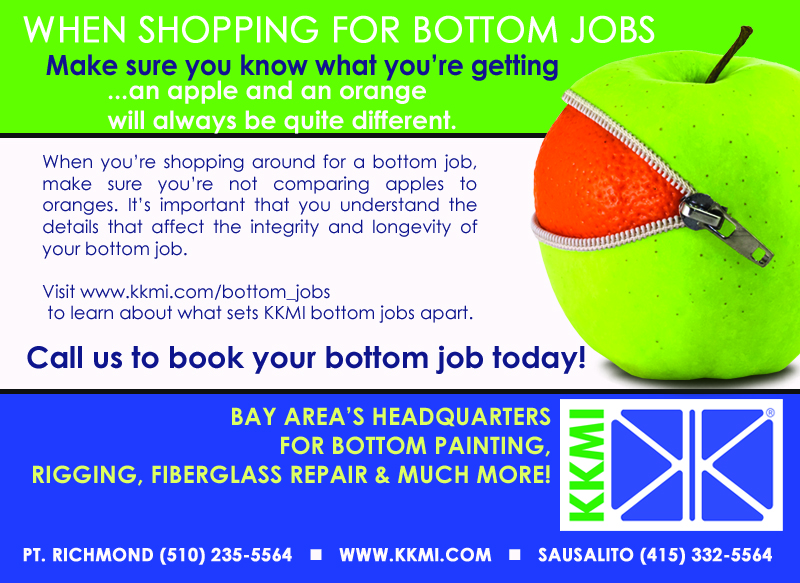 There’s a big difference between apples and oranges, just as there is between bottom jobs. Make sure you know what you’re getting.

In January 2021, we wrote about a new search and rescue facility to be built at the Vallejo Municipal Marina. Coast Guard Station Vallejo’s new $14 million facility was officially opened on Friday with a ribbon-cutting ceremony. The 13,200-sq-ft facility is located approximately 3.5 miles northwest of its former temporary location at the California Maritime Academy and includes a new boat bay for small-boat maintenance, berthing for 14 watchstanders, a galley, command center, training room and fitness room.

Chief Petty Officer Joshua Hollyfield, Station Vallejo’s officer-in-charge, said at the groundbreaking ceremony in 2021, “The new station, which has been years in the making, will allow the crew to be co-located with our small boats, greatly improving our response time to continue to protect the lives of mariners in Vallejo and the greater Bay Area.”

Vallejo Station members have been housed in temporary facilities since 1996 and have had to relocate twice due to funding constraints and obstacles.

The Vallejo unit consists of 27 personnel and three 29-ft Response Boats-Small, and is responsible for search and rescue and law enforcement missions. The unit’s area of responsibility extends from San Pablo Bay to Suisun Bay and as far east as Simmons Point, south of Honker Bay.

Tiburon sailor Stephen Spoja is the newest Latitude 38 Golden Ticket winner. Stephen picked up his September issue at Modern Sailing in Sausalito and was surprised to find the ticket inside.

Stephen has sailed and raced on San Fransisco Bay for 50 years, and for the past seven years he’s been a sailing instructor at Modern Sailing.

Though now, Stephen can be found leading a sailing flotilla along Italy’s Amalfi Coast.

Stephen has asked for a blue Latitude 38 hat. The next question is, will it reach him in Italy or will it be waiting for him when he returns to Tiburon?

Do you have your September issue yet? You can get yours at any of our Bay Area distributors. Or better, have one sent in the mail each month. Subscribe here.

SHARE ON Tweet Share Email Linkedln
Receive emails when 'Lectronic Latitude is updated. SUBSCRIBE
'Lectronic Latitude: Friday, Sep 16
A Rollicking Good Time on S.F. Bay
Breeze on From the Get-Go at Rolex Big Boat Series
"Today was pretty high winds: 25-27 knots," said John Egleston when we talked with him at the St. Francis Yacht Club docks.
A Discussion About Karl
Is San Francisco Bay’s Fog Disappearing?
The climate is changing worldwide. The New York 'Times' has zeroed in on how it's changing fog patterns (or not) on San Francisco Bay.
Sponsored Post
Earn While you Own in a Lagoon 380
Place in our skippered charter fleet and your boat earns while you are not using it. Download the equipment list.
Charting a Course
Paper Navigation Charts Set To Be Phased Out by 2026
UKHO joins NOAA in ceasing production of paper nautical navigation charts.
From the Magazine
A Naked Scene From a Liveaboard Life
Standing naked and wet in the boater’s restroom, with all of his clothes and his dock keys locked in the shower room, Tim had to find his way through the gate and back to his boat.
Sponsored Post
San Francisco on the Bay: “The List”
Discover San Francisco Bay and all that inspires those of us who live or visit here.
More 'Lectronics »
Report Listing