The San Diego-based Ancient Mariners Sailing Society put on the 47th Yesteryear Regatta on May 8. Photographer and sailor Janie Noon crewed aboard Chimaera, camera in hand, and sent us the following photos.

Janie writes: “I have sailed with the Ancient Mariners Sailing Society for six or seven years — what a gift for my retirement years! I do take photos as I am crewing and use them to produce our newsletter, Albatross, all for love — and have been thrilled to have my photos in Latitude 38. This is the second time for Schooner Cup, my favorite race. Jerry Newton and the schooner people are the best ever! For most other events I sail on a Sparkman & Stephens Driscoll-built racing sloop or a Kettenburg 50. Lucky me!”

Janie’s most recent photo in Latitude 38 is of Bill of Rights and Age of Grace competing in the 2021 America’s Schooner Cup on March 27. Check it out on the opening spread of Racing Sheet in the May issue.

These luscious images have us salivating for San Francisco’s Master Mariners Regatta, coming up on May 29. We’ll be out there!

Jim Hancock of the San Francisco Science Sailing Center emailed the other day, wondering if we had any stories on how many cell phones might be in the Bay. We know there are plenty. He had a couple of friends who’d recently lost phones in the Bay and was curious about how many other stories we’d heard.

Of course, we have our own, too. We remember losing a Palm Pilot (what the heck is that?) out of our breast pocket when we leaned down to snug up a dock line. A few years ago, while in a celebratory moment on the dock with our daughter, our hands collided and sent her cell phone in a great arc into the water. Then a while back we had a close call when a cell phone dropped to the dock and bounced up against a dock box.

We’re sure most of the barges filled with dredging spoils from the various marinas around the Bay must be half filled with cell phones (and sunglasses).

The Bay is surrounded by tech and an active sailing population of ‘early adopters,’ so it stands to reason that it must have one of the highest concentrations anywhere of cell phones resting on the bottom.

How many have you lost? How have you lost it/them? We’re sure ‘Find My Phone’ doesn’t help at the bottom of the Bay, but have you had any miraculous recoveries anyway? Let us know in the comments below. 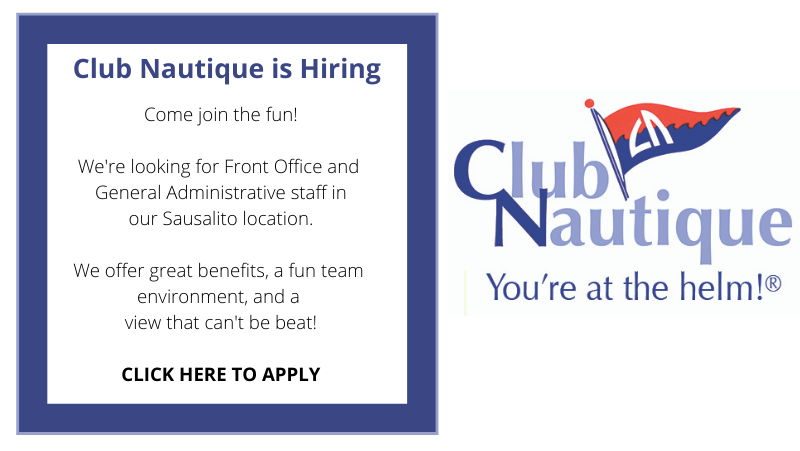 In the May issue of Latitude 38, we share the story of Hey Ya, an old sailboat that finds its way into the Banderas Bay Regatta.

Seven years ago I was having a beer at Vallarta Yacht Club when Ken ‘Yak’ Yachechak sat next to me. We exchanged greetings.

“Are you interested in being my partner in a boat?” asked Yak.

Always one to carefully consider big investments, I waited a few seconds before saying, “Sure!”

So began my relationship with Hey Ya, a Beneteau Oceanis 390 built in 1989. I was making a decision to purchase an almost-30-year-old boat pretty much sight unseen. What could possibly go wrong?

After years of work on the boat, including removing a staysail (who puts a staysail on a 39-ft Beneteau?) and practically rebuilding the aging Volvo Penta engine, Hey Ya was getting back to her former glory. Somewhere in there I bought Yak out. He became more interested in sailing Mike Seth’s J/145 Double Take than sailing an aging production boat that couldn’t point and had a habit of losing races, badly.

When COVID hit, I decided I was going to make lemonade out of lemons and devote a good deal of my quarantine time to Hey Ya. I did extensive rewiring, pulling out what seemed like miles of wire that wasn’t doing anything. As a retired electrical engineer, I had frequent “WTF?” moments during the project. In spite of a few compromises that still wink at me from time to time, I’m pretty pleased with the final result.

In addition to the rewire, I also contracted with a local company to re-canvas the boat and make new interior cushions. I put her on the hard, and Peter Vargas’s team at Sea Tek gave Hey Ya a new top-to-bottom paint job and thru-hulls. They worked on Hey Ya for two months, and like a lot of boat owners, I became a familiar face at the yard.

Hey Ya‘s refit-reveal was this year’s four-race Vallarta Cup in January. Holy moly, we won our division! I know that crew — and the fact that there were only three boats in our division — had a lot to do with it, but damn! A win is a win. It had to be the new paint! The question was, were we ready to tackle the Banderas Bay Regatta?

Read the rest of the story at Latitude 38.com.

In this month’s issue of Latitude 38 we brought you a story about small boat building in the Bay Area. So is it coincidence that legendary boat designer Ron Holland is due to speak as part of Sausalito Yacht Club’s Speaker Series this coming Wednesday? Probably. But we can’t help thinking that this event may have been inspired by all the hard work done by our backyard shipwrights. At the very least it makes a good follow-up to our story. Mind you, Mr. Holland’s boats are no doubt much larger and more involved than the small craft we wrote about, but nonetheless, we feel the speaker event is probably of great interest to many budding boat builders. After all, great things often grow from small.

For those who are unfamiliar with Ron Holland’s name, the New Zealand-born (what is it with those Kiwis and sailing?) began his sailing life aboard a ‘P’ class dinghy that he received for his 7th birthday. Despite a less-than-successful first sail, Ron grew to love the sport, and at age 15 was presented with the opportunity to crew from Auckland to Sydney aboard the 36-foot ketch Aloha.

Ron later obtained a boat-building apprenticeship that included drawing and design classes, which eventually became his forte and led to his first design commission at age 19 — a 26-foot yacht, White Rabbit.

The rest, as they say, is history, and also a part of Ron Holland’s interesting story. If you can find a way to tune in to Ron’s Zoom session at SYC this Wednesday, we imagine you’ll find it worth your while. 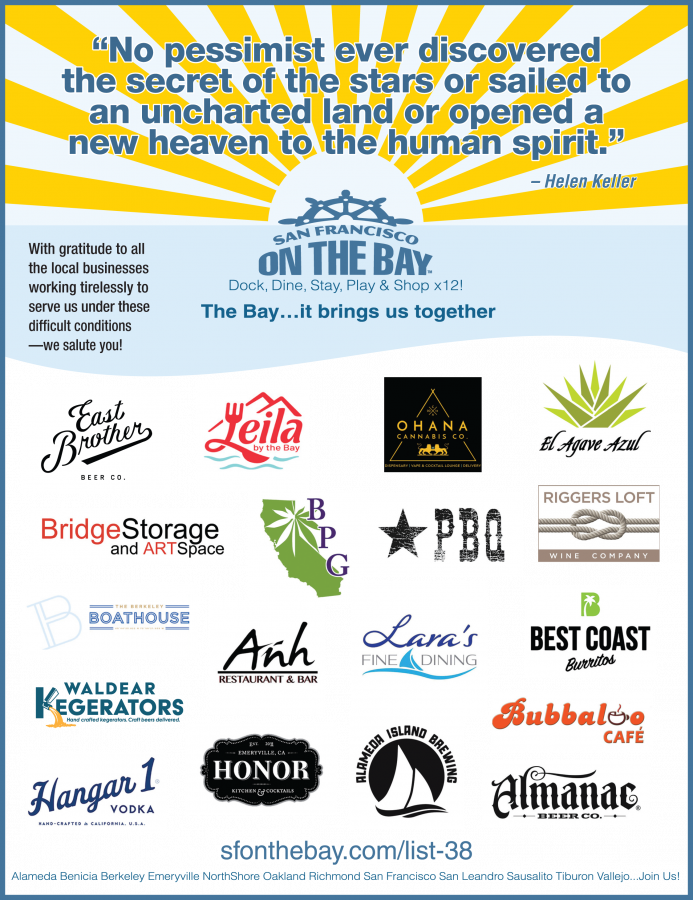 SHARE ON Tweet Share Email
Receive emails when 'Lectronic Latitude is updated. SUBSCRIBE
'Lectronic Latitude: Friday, May 14
Head South with the Fleet
The Grand Poobah’s Baja Ha-Ha News Update
"We highly recommend you make a land trip to San Diego for the Skippers' Meeting, where you get the Rally Instructions and important information, as well as your Swag Bag, and can be on hand for the Costume Kick-off Party."
The Golden Ticket
Todd’s New Magazine Wins Him a Latitude 38 T-Shirt
Todd picked up his 'Latitude 38' at the Jack London Square fuel dock in Oakland and found a Golden Ticket inside.
Sponsored Post
Tour the Newest Beneteau and Lagoon Models at Passage Nautical’s By-Appointment Event
"You’re exclusively invited to take a tour of the world’s number-1 brands. Come see our newest Beneteau and Lagoon models!"
An Academic Exercise
The Rediscovery Redux of a Bay Area Waterfront Gem
Discarded riprap lines the low-tide shores, and there are gated-off junkyards at the end of abandoned railroad tracks. There's a bit of a Mad Max, post-apocalyptic feel.
Olympic Classes and Offshore Doubles
West Marine US Open Sailing Series Moves to California
US Sailing launched the new West Marine US Open Sailing Series earlier this year. The second half of the Series will get underway next month in San Diego.
Time for an Upgrade?
Is It Time to Sell Your Sailboat?
We bought and sold a boat in the last six months and are now sailing Friday night races and looking forward to another summer of sailing.
More 'Lectronics »