In this month’s issue of Latitude 38 we brought you a story about small boat building in the Bay Area. So is it coincidence that legendary boat designer Ron Holland is due to speak as part of Sausalito Yacht Club’s Speaker Series this coming Wednesday? Probably. But we can’t help thinking that this event may have been inspired by all the hard work done by our backyard shipwrights. At the very least it makes a good follow-up to our story. Mind you, Mr. Holland’s boats are no doubt much larger and more involved than the small craft we wrote about, but nonetheless, we feel the speaker event is probably of great interest to many budding boat builders. After all, great things often grow from small. 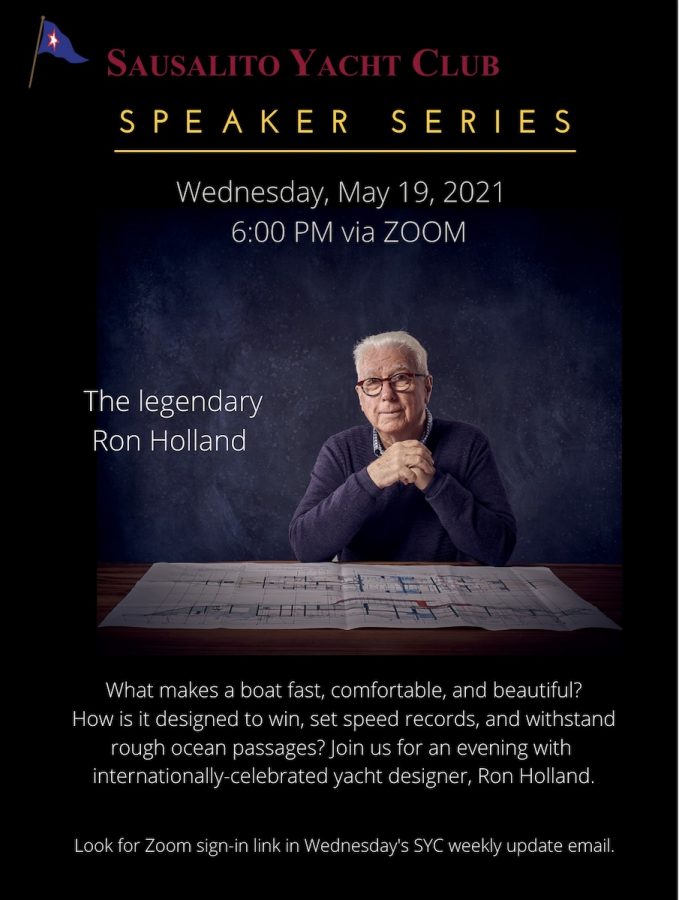 For those who are unfamiliar with Ron Holland’s name, the New Zealand-born (what is it with those Kiwis and sailing?) began his sailing life aboard a ‘P’ class dinghy that he received for his 7th birthday. Despite a less-than-successful first sail, Ron grew to love the sport, and at age 15 was presented with the opportunity to crew from Auckland to Sydney aboard the 36-foot ketch Aloha.

Ron later obtained a boat-building apprenticeship that included drawing and design classes, which eventually became his forte and led to his first design commission at age 19 — a 26-foot yacht, White Rabbit.

The rest, as they say, is history, and also a part of Ron Holland’s interesting story. If you can find a way to tune in to Ron’s Zoom session at SYC this Wednesday, we imagine you’ll find it worth your while.

Receive emails when 'Lectronic Latitude is updated. SUBSCRIBE
'Lectronic Latitude: Monday, May 17
Vintage Vessel Eye Candy
Views of Yesteryear (the Regatta, That Is)
The San Diego-based Ancient Mariners Sailing Society put on the 47th Yesteryear Regatta on May 8.
Can You Hear Ringing from Below?
How Many Cell Phones Are in the Bay?
We're sure most of the barges filled with dredging spoils from the various marinas around the Bay must be half filled with cell phones (and sunglasses).
Sponsored Post
Club Nautique Office Staff Job Openings
We offer great benefits, a fun team environment, and a view that can't be beat!
Old Boat Making Good Time
Hey Ya! Banderas Bay Regatta
I was making a decision to purchase an almost-30-year-old boat pretty much sight unseen. What could possibly go wrong?
Sponsored Post
San Francisco on the Bay: Dock, Dine, Stay, Play
Discover San Francisco Bay and all that inspires those of us who live or visit here.
More 'Lectronics »