Up and down the west coast of the Americas rests a fleet of cruising sailboats that have been outfitted, restored and prepared for a voyage west, across the Pacific. Many were ready to start the Pacific Puddle Jump last year, and they remain ready today. They’ve been joined by others who thought they could ride out a one-year pandemic postponement in Mexico, or their home cruising grounds, before joining the Puddle Jump this year. The summer Olympians planning to head to Tokyo have been thinking the same thing. Unfortunately, once again, things have not gone according to plan. Both the Pacific Puddle Jump and the Tokyo Olympics remain on hold pending an improving planet. We asked Pacific Puddle Jump ringleader Andy Turpin to give us an update.

“For 23 consecutive years the loosely structured Pacific Puddle Jump rally (PPJ) has helped introduce hundreds of westbound cruisers to the wonders of French Polynesia and beyond. But this year, due to a variety of issues related to the COVID-19 pandemic, PPJ organizers have had to shelve their rally plans, at least temporarily. Here’s an overview of the situation.

“Last March, in reaction to the rapid increase of COVID cases worldwide, virtually every South Pacific nation quickly closed its frontiers to international yachts, and they remain closed today with the exception of Fiji, which international sailors may now visit by special arrangement.

“The other exception is French Polynesia. Since last spring it has officially been ‘closed’ to arriving yachts, although several hundred have been granted permission — while underway — from the territory’s maritime agency, DPAM, to cruise the archipelagos in a nearly normal fashion. Trouble is, DPAM cannot guarantee that this seemingly contradictory policy will remain throughout the April-July arrival season.

“It’s not that local businesses don’t need the substantial income that yachts bring — they do. Or that international yachties are responsible for escalating the COVID numbers — we know of no cruisers who have arrived ill or infected since March, although a superyacht crew who flew into Tahiti from Europe last spring did test positive.

“One major problem with the prospect of a new fleet of cruisers arriving in the coming months is that at least half of the boats that arrived last spring are still in French Poly waters, with or without crews aboard. Marinas and mooring fields in Tahiti and Raiatea are chock-full, and many boats are moored in previously unauthorized anchorages in and around the capital, Papeete. Until New Zealand and Australia open up again, the logjam of cruising yachts in Tahiti will continue to grow. That said, cruising in the outer atolls seems largely unaffected, except that islanders may seem a bit more guarded than in years past.

“Another factor that might inspire would-be Puddle Jumpers to delay their South Pacific cruising plans is that Long Stay Visa applications are not currently being processed, due to the closure of French consular offices worldwide. Without this, non-EU passport holders are given only 90 days to cruise French Polynesian waters — an area larger than Western Europe.

“Regardless of all this, some international cruisers will undoubtedly be determined to test their luck and make the crossing — rally or no rally. If you are among them, Puddle Jump organizers encourage you to cross later in the season than normal, i.e., toward the end of May or in early June. Perhaps by then COVID vaccines will have reached the islands, and the future will look a little brighter for residents and visitors alike.

“Organizing a late-season PPJ rally is not out of the question, but for now the best advice seems to be to sit tight wherever you are until COVID-related tensions ease, and at least several more South Pacific nations open their frontiers.”

While we’re all starting the new year with plenty of hope for the new vaccines and progress with the pandemic, the current news headlines are not encouraging. Yet, if you are on a well-prepared boat and able to cruise and isolate in whatever cruising area you inhabit, we think you should consider yourself lucky. And when the world finally improves enough for everyone to cast off, it will be ready to welcome cruisers with open arms. Or whatever greeting seems appropriate at the time!

Although stopped and resting, Sparrow and Whitall Stokes’ adventure continues from shore rather than at sea.

Whitall was attempting a nonstop singlehanded circumnavigation from San Francisco when his Open 50 Sparrow started to have problems breaking stuff while rounding Cape Horn. The last time we checked in with them they were headed for Argentina. “I was thinking Ushuaia, Argentina, was the place that would have the best infrastructure in the area to support repairing Sparrow. Alas, this was not to be. As I made my way west down the Beagle Strait on December 28, Ushuaia refused not only entry, but also even anchorage. The authorities there refused to assist a mariner in distress.”

Argentina, like every other country, is dealing with COVID and is currently not accepting transients. “I was crushed and got emotional on the radio, not knowing what to do. This all happened on open VHF channels, with many folks in Puerto Williams, Chile, listening in.” Puerto Williams is just south of Argentina. “After a brief exchange on VHF with the Puerto Williams Harbormaster, he allowed Sparrow to anchor off the town temporarily while they determined what to do next.” Like Ushuaia, Puerto Williams is on lockdown and under a curfew due to COVID. Chile is not accepting foreigners, so if they did anything it would be through a waiver process.

“Puerto Williams happens to have a significant Chilean naval presence, and apparently the navy took an interest in my case. The local authorities moved extraordinarily quickly, and on the morning of the 29th two officers were onboard Sparrow taking pictures of my passport, vessel documentation, and some of the damage. Some hours later they allowed Sparrow to move into the inner harbor to a mooring. In the afternoon there were six authorities in uniform onboard Sparrow, where they asked me some questions, gave me a health inspection, and then stamped my passport with a 90-day tourist visa. Boom.”

Whitall had been alone at sea since November 10. He had already been in quarantine, so no problem with mixing with the locals. And they turned out to be friendly. “The check-in is only the beginning of the reception I’ve received since anchoring in Puerto Williams. After [I got] the visa, the captain of the Isaza, one of the naval vessels here and the number two naval officer invited me for a hot shower, meal and some lubricating beverages. Three hours later I left with clean skin, a full stomach, two blankets and maybe a little woozy from the pesco. Commander Guerrero had just received a promotion that day so was in a certain mood!”

So all’s well with Sparrow for now while Whitall contemplates the next move. “And now my attention turns to repairs. I can see while waiting for parts to arrive Sparrow may take a little cruise westward to see glaciers and who knows what else.” 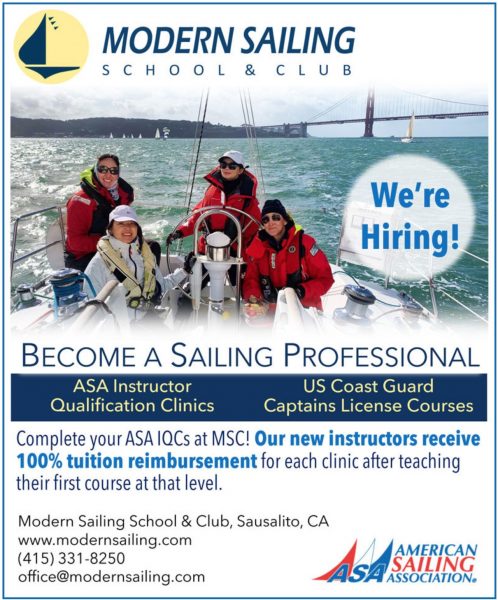 Josh Dvorson is no stranger to Latitude 38. In fact, when we put his name into our search bar we were rewarded with several mentions. The most recent was in April, when Josh sent us a photo of his 1976 Ericson 27 Homeslice sailing out of Sausalito beneath a beautiful pink sky and full moon. This time, though, we actually have a photo of Josh as well as his boat, as Josh drew the last Golden Ticket of 2020 out of his December issue of Latitude 38.

Unfortunately Josh will not be rewarded with the lifetime supply of chocolate he was hoping for: “I feel a little like Charlie in the Chocolate Factory.”  (Although, as he picked up his December issue at Bridgeway Bagel in Sausalito, we presume he did get a bagel.) However, the Golden Ticket does entitle its bearer to win a Latitude 38 T-shirt or hat, and we understand he has chosen the T-shirt.

For your next photo, Josh, how about a shot of you wearing your new T-shirt?

Last week the Northwest Maritime Center in Port Townsend, Washington, announced that they would cancel the Race to Alaska for the second year in a row. The announcement reads, in part: “In 2020 we witnessed the Canadian border drop like a guillotine on the neck of Race to Alaska.” The race had been scheduled to start from Port Townsend in June, proceed to Victoria, BC, and then traverse Canadian waters en route to Ketchikan in Southeast Alaska. “Since our imprisonment, we at high command have watched the world tear itself apart in an effort to put itself back together more COVID-resilient. However, the border is still closed and the communities along the race route remain fragile and do not want us anywhere near their shores.”

“What do you do when you are dumped by Canada? Have fun just in sight. Toss your hair back and head to Point Roberts. Make out with San Juan Island while Vancouver is watching. We’re running a race in 2021, and it’s called WA360.” (Pronounced Washington 360.) “It’s the longest race of its kind in Washington and — much like its Alaskan counterpart — engineless, unsupported, and 360 miles through the best and worst conditions Washington waters have to offer. It’s like R2AK with less bears and more hospitals.”

Unlike in the R2AK, WA360 racers may carry engines; however, if they use them they will be dropping out of the race. The rules allow stops, though none are scheduled as part of the event. The route will take racers from Port Townsend to Port Ludlow to Olympia to Tacoma to Seattle to Oak Harbor to Anacortes to Bellingham to Point Roberts and back to Port Townsend.

The starting gun will fire on June 7. Organizers will begin accepting applications on January 15. For more info, see https://nwmaritime.org/wa360.

SHARE ON Tweet Share Email
Leave a comment
Receive emails when 'Lectronic Latitude is updated. SUBSCRIBE
'Lectronic Latitude: Monday, Jan 4
Parading Around Alameda
Sailing into the New Year ‘Round the Island
Every year on New Year’s Day, San Francisco’s boating community converges on the Alameda Estuary for ‘Round the Island — a semi-organized parade of watercraft that includes sailboats and powerboats and rowboats.
30+ Years of Finding the Ultimate Shots
How to Pick the Ultimate Sharon Green Photo?
When contributing editor Ross Tibbits spoke to Santa Barbara resident, world-renowned sailing photographer and Ultimate Sailing Calendar creator Sharon Green for his story in our January issue, he asked her to send along a few shots for the story.
Sponsored Post
Westwind Boat Detailing Offers Washing, Waxing and Varnishing
Washing, waxing, varnishing. Serving the entire Bay Area for more than 30 years. “Everything looks great! It was a huge relief."
Learn from the Experts
Zoom in for Wooden Boat Festival’s ‘Ask an Expert’
From January 6 to April 7, Wooden Boat Festival is hosting a series of eight behind-the-scenes interviews and demonstrations followed by Q&A sessions.
Solo Nonstop Round-the-World Race
Vendée Globe Leaders Round Cape Horn
More than 57 days into this edition of the Vendée Globe, the leaders have now rounded Cape Horn and pointed their bows toward Europe.
More 'Lectronics »