Mike Pouliot had the good fortune to be out sailing on the Bay midweek, aboard his Yankee 30 Emerald. As an added bonus, he managed to catch a good feed of crabs along the way — just in time for Christmas!

We left Alameda at 7:30 a.m. and soon found a nice easterly wind to push us out the Gate. We dropped two crab pots at the “secret spot,” which is basically the closest legal spot to drop them.

We then sailed north along the coast to roughly Pirates Cove as the pots soaked, on a truly glorious day of sunshine with relatively flat water and variable but consistently present wind.

We were rewarded with a dozen crabs, including a couple of really nice Dungeness, before sailing home. We shook out a reef along the Cityfront and finally motored in once we got near the Bay Bridge and lost all wind. One hell of a Wednesday!

So, Mike, where did you say the secret spot is? If anyone else knows where the crabs are, feel free to let us know ….

Whitall Stokes and his Open 50 Sparrow made it around Cape Horn on December 26 in an attempt to sail a singlehanded and nonstop eastabout circumnavigation starting from and returning to San Francisco. Whitall had to approach the Horn carefully, with Sparrow experiencing little problems along the way. Nothing major, just annoying problems. “I’m hoping I’ve solved the leak over the navigation station electronics. Epoxy, caulk, tape and everything I tried to no avail,” he wrote on December 20. “We are now using some plumber’s putty and some tough crack-filling goop that should flex a bit.”

And a Little Bigger Problem?

“No news yet on the rudder bearing. I’m thinking the hull is flexing around the bearing and rudder shaft. Maybe end up lubricating, sailing conservatively, less runner tension and limping around a bit when seas are up.”

On the 24th, he reported: “400 miles to the Horn. Weather looks decent at the moment anyway. It’s been a rough few days as a couple of low-pressure cells went by; I haven’t really been up to posting. Mostly breeze has been the garden-variety gale at 35 – 40 knots, but early morning on the 23rd we saw over 50 knots.”

Then on the 26th, Whithall and Sparrow made it past the Horn. “Behold! An emotional morning with not much sleep last night. Sparrow finally rounded Cape Horn! Delayed due to a period of no wind and mainsail traveler car issues last night.”

But even with problems slowing them down, Whitall kept positive. “I’m grateful for the delay and the good weather this morning as it allowed me to see the surrounding area. Snow on the Andes! It’s really spectacular country down here. The Chilean Coast Guard checked in with me, for which I am also grateful. “Special shout-out to Brian Boschma for the chardonnay! A little early, but so very welcome. Another special shout-out to Jamie Cantu for the long underwear that has made a cold trip tolerable. “It’s so nice to have a few hours of relatively calm seas here in the lee of South America. Somehow seeing Cape Horn this way has made this whole effort feel worthwhile. With Stage 2 complete, it’s now time for a little lunch and some sleep.”

While Whitall has tolerated relatively small problems like leaks, and bigger ones like noisy rudder bearings, he has to pull the plug and head into port in Argentina with major damage.

“Heading for Ushuaia for repairs and should arrive tomorrow morning. No idea what will happen with Customs and COVID. The port-side double turning block ripped out of the deck this morning, complete with broken backing plate. This happened while I was heading upwind through the strait in 20 knots and smooth seas. This is on top of the traveler failure the other day, which I am also unable to repair at sea. No further decisions have been made.”

With the runner block gone, the only thing he could have done was head for safe harbor. His list of repairs before the next step is extensive, and we will have to wait for the report of what’s next. See www.svsparrow.com for more details. 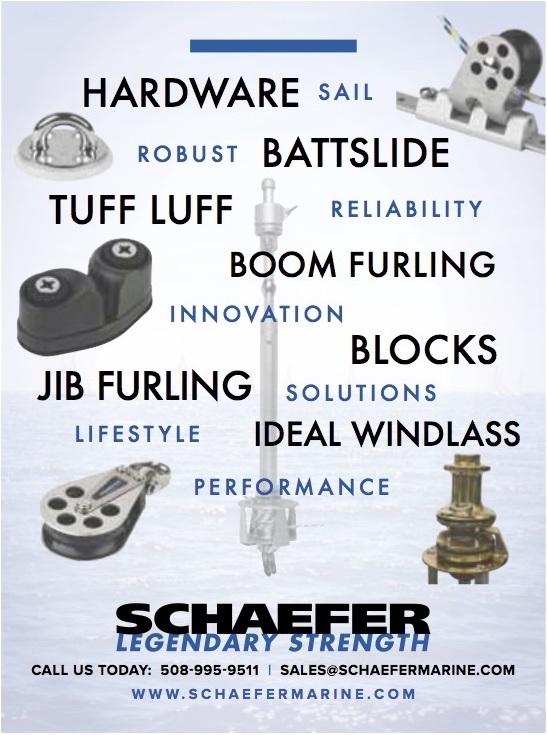 For over 45 years, Schaefer Marine has led the way in innovative and reliable sailboat and marine hardware. We pride ourselves on having the toughest gear on the water that will always stand up to the rigors of the marine environment.

We escaped to the mountains for a few days to visit our daughter, who, like many former city dwellers, thought working from home in a rental in the mountains was better than working from a rental in a city where all the lights are out. Luckily for ski areas straining to make a go of a semi-successful ski season, there was decent skiing, with some fresh snow that fell on Christmas Day. Despite being far from the ocean, high in the mountains, and surrounded by fresh snow, we weren’t far away from sailing. The neighbor next door has a Hobie Cat in the back yard, waiting for the spring.

For now, your options are to bring your boat to the coast or keep it in the backyard and enjoy the ski season.

Midwinter race series continue, with some modifications due to the pandemic. Be on the lookout for late changes due to stay-at-home orders during this surge. See www.latitude38.com/calendar for a comprehensive list in Northern California.

As noted in ‘Lectronic last week, Encinal Yacht Club has moved their third day of Jack Frost racing from January 2 to January 23. Now Tiburon YC has announced that they’ll postpone their race scheduled for January 2 too. “With the current state of the pandemic and health restrictions, the TYC race committee has concluded it is not prudent to hold the January 2nd Mott Midwinter race day,” writes TYC RC member Cam Tuttle. “If the situation improves we will hold the February 6th race as scheduled. We are tentatively proposing a reschedule date of February 20 in lieu of the January race.”

Oakland YC’s Sunday Brunch Series was supposed to begin on Sunday, January 3, but that has been postponed too. The OYC race committee will work to find a new date. In the meantime, the next scheduled date is January 17.

Although they canceled their new January 1 Resolution Regatta, Corinthian YC is still planning to hold the first weekend of the Corinthian Midwinters on January 16-17. This two-weekend, four-race series welcomes multihull, PHRF, shorthanded, sportboat and non-spinnaker entries, and offers one-design classes of five or more entries including J/105, Alerion Express 28, J/24, J/70 and J/88. In accordance with current health regulations, no social activities will follow racing, and berthing is available only to CYC members.

Island Yacht Club invites you to sail, paddle or power around Alameda Island on New Year’s Day — an annual tradition, albeit with a pandemic twist — no stopovers at yacht clubs this year. Start on the Estuary on the west side of the Park Street Bridge at 10:30 or 11:30 a.m. Proceed clockwise via the Park Street Bridge, Fruitvale Bridge, High Street Bridge and Bay Farm Bridge. Prior to each bridge opening, the boats will circle and coordinate via VHF channel 68. Bring your own food and drinks and keep COVID-safe.

There’s a Fiasco on the Horizon

The Singlehanded Sailing Society plans to run the biggest race west of the Mississippi on Saturday, January 30. It’s the Three Bridge Fiasco, a nutty winter ritual in which more than 300 boats, all of them sailing singlehanded or doublehanded, start in front of Golden Gate YC on the San Francisco Cityfront. It’s a pursuit race, and skippers choose their direction to cross the starting line, direction of mark roundings and order of mark roundings, then finish back where they started — again in either direction. It can be chaotic, and often suffers from wind insufficient to overcome strong currents. A 4-plus-knot ebb is predicted for late in the afternoon of January 30, calling to mind the race three years ago when most of us were swept out the Gate. Last year’s race was held in a cloak of fog.

California Dreamin’ Series will not start on January 30-31 as previously planned. Instead, the San Diego dates will move to October. The new schedule is:

We suspect that the spring dates could still change. Find the updated Notice of Series here.

For more event and race dates, check the Calendar section of the January issue of Latitude 38, and the 2021 Northern California Sailing Calendar and YRA Schedule. Both will come out on Wednesday, December 30.

SHARE ON Tweet Share Email Linkedln
1 Comment
Receive emails when 'Lectronic Latitude is updated. SUBSCRIBE
'Lectronic Latitude: Wednesday, Dec 23
Sailing OPBs
Tracking Winter Sailing Under Hazy Skies
Winter days are good sailing days on the Bay, and you don't even need to own a boat to enjoy them. Dana Dupar crewed aboard 'Irie' and sent us these photos.
A Surfing Trip Gone Wrong
Shipwrecked
There were about 20 young Indonesian crewmembers — none spoke English, none knew how to swim, and all were in a state of panic, running back and forth.
Sponsored Post
The Canvas Works
Good quality boat cushions are important for both form and function. Let us help you freshen up your boat deck, salon or sleeping area.
Riding to SF by Boat
The New Ferry-Line Proposal for Berkeley Marina, Part 2
In 2009, a new ferry in Berkeley seemed all but inevitable. One of the concerns with the 2009 proposal was additional dredging of a second channel angling from the main marina thoroughfare.
Solo Nonstop Round-the-World Race
Strangely Tight Vendée Globe Races through the Southern Ocean
More than 45 days into the ninth edition of the Vendée Globe, Yannick Bestaven on Maître CoQ IV continues to lead the race and now threatens to break away.
Merry Christmas to all our Readers
Merry Christmas sailors! We wish you all the best of fun and happiness for the days ahead, and we hope you get to go sailing.
More 'Lectronics »
Report Listing