Here’s your August Caption Contest(!). This video and subsequent still photos went viral a few months ago, inspiring our non-sailing, non-boating friends to send us the footage.

Don’t forget to check the September issue for the winner and top 10 entries. Good luck! Thanks to Spawn Fly Fish for this awesome clip.

With all other in-person events canceled for this year’s Delta Doo Dah cruising rally, we were pleased that Delta Bay Marina in Isleton was able to welcome about a half dozen boats and 20 fleet members on Sunday afternoon.

Delta Bay is located just off the San Joaquin River at Sevenmile Slough. Temps that day hit the mid-90s, with just a light breeze.

We set up a table, handed out free magazines and bumper stickers, and sold some shirts and burgees from previous years — this year’s swag having long since sold out.

Members of Peninsula Yacht Club hosted us on the marina side of the levee, preparing grilled burgers and homemade salad, and scoops of ice cream, all for an optional donation. Like Island YC in Alameda, Peninsula was evicted from the Docktown Marina in Redwood City. Their clubhouse has been torn down to make way for development.

Across the street below the levee, Park Delta Bay put on their usual Sunday Market, with arts and crafts booths, fresh local produce for sale, and music provided by a singer/guitarist.

Mary Lovely of Green Buffalo commented that the event felt comfortable and safe. Everyone wore masks except while eating or drinking, and the docks and grounds never felt awkwardly crowded.

Don’t leave shore without it.

As regular readers know, Alameda Marina was the former home to Svendsen’s Boat Works and Marine, Island Yacht Club, Doyle Sails, Hogin Sails, LTD Marine, Carl Schumacher’s design studio, a host of other marine businesses over the decades, and numerous dry-sailed boats. It is now under redevelopment to provide much-needed housing and to rebuild the seawall along the waterfront and marina. Of all the marine businesses serving the Bay Area boating community during that time, none was better known than Svendsen’s Boat Works. They have since merged with Bay Marine to become Svendsen’s Bay Marine in Richmond. A reader sent in a photo of the final days of Svendsen’s Boat Works in Alameda. 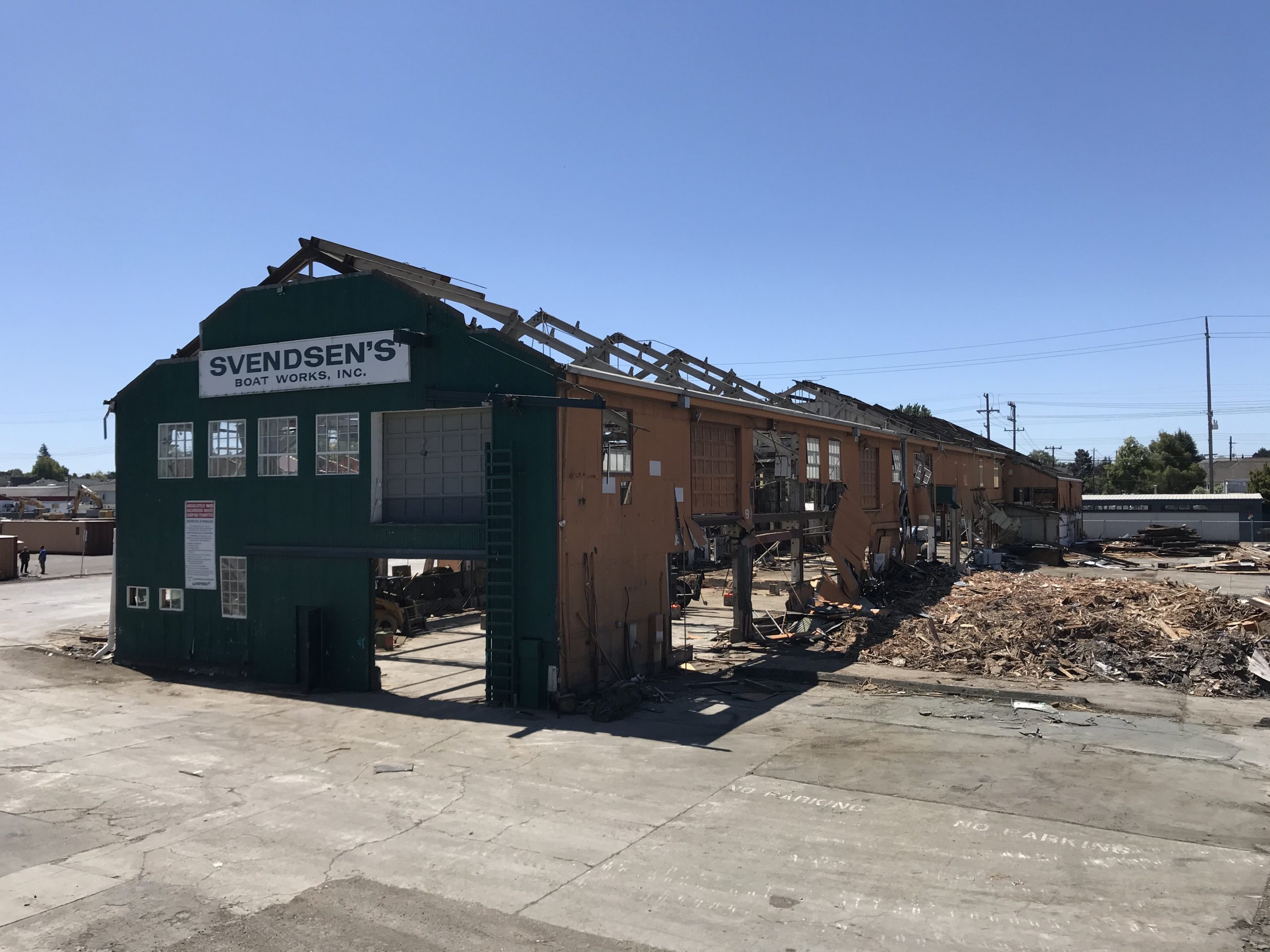 The original development plans include space for recreational marine access, the marina and a maritime commercial center. For now, the project is in full demolition mode as the old makes way for the new. As we wrote in the July issue there are plans to replace the currently decommissioned hoist for future dry-stored boats. We also covered Island Yacht Club, which was located on the site and is currently operating as a ‘paper club.’

While the site is under reconstruction, all the former maritime business tenants have moved to new locations. IYC members continue to keep boats at Alameda Marina and run Friday night races. If all goes well, future condo residents of Alameda Marina will continue to enjoy sailing and have the support of marina services right at their doorstep.

The 17th Annual International Ocean Film Festival is on now. The event, which usually runs in March, has this year become a virtual event. This year’s festival, ‘Reconnecting Summer 2020,’ is a virtual experience showcasing all of the Official Selections of this year’s festival. In addition to the online screenings, the IOFF is hosting livestream interviews, Q&A sessions, and panel discussions with filmmakers.

Every year, the organization produces a festival of ocean-themed films from all over the world that are largely unavailable to the general public. This year’s festival includes films such as Galapagos Evolution, in which Pierre Cousteau, son of the legendary Jacques Cousteau, and a team of internationally famous free-divers explore biodiversity in the cradle of evolutionary theory, the Galapagos Islands; Humboldt Archipelago: Paradise in Danger, a documentary about the conflict involving the mining mega-project Dominga and its possible consequences on one of the places with the most biodiversity in continental Chile, and also considered a place of global importance; and All Inclusive, about a floating city in the middle of the ocean where all walks of life are packed in a confined space to fulfill everyone’s desires.

Over 50 films are available on demand, exploring themes such as adventure, culture, environment, surfing, sustainability, innovation and more. Plus the live-streamed Q&A sessions are being recorded for on-demand viewing.

Watch this trailer by Yuko Inatsuki.

To get view prices and ticket packages click here: http://intloceanfilmfest.org/ioff2020

The International Ocean Film Festival (IOFF) is a nonprofit organization with the mission to save our oceans, one film at a time. Using film as a medium, the organization aims to increase public awareness of the environmental, social, and cultural importance of marine ecosystems and foster a spirit of ocean stewardship.

SHARE ON Tweet Share Email Linkedln
Leave a comment
Receive emails when 'Lectronic Latitude is updated. SUBSCRIBE
'Lectronic Latitude: Monday, Aug 10
GPS Spoofing
GPS Spoofing Could Cause Problems for Sailors
Back in June we ran a couple of stories about GPS 'spoofing'  — a series of incidents in which AIS was showing boats circling off of Pt. Reyes, while the vessels themselves were actually hundreds of miles away.
The Adventures of the Griffith Family
Film About Pioneering California Circumnavigators
Steering their 53-ft cutter Awahnee to places no small boat had been before, they spent decades navigating the relentless pull of family and adventure.
Sponsored Post
Yacht Management Services by Modern Sailing
Place your yacht in the Modern Sailing School & Club charter fleet and enjoy the benefits of ownership while we manage the finer details.
Hobie 16 North American Champ
Meet Champion Hobie Sailor Ben Brown
This is a profile of a young man who found all of this before he was even 10 years old. Ben Brown took his first ride on a Hobie 20 with his grandfather.
Lockdown Sailboat Building
Sailor Spends Lockdown Building Sailboat Inside House
A United Kingdom sailor came up with the ultimate pandemic-lockdown activity — he spent three months building a sailboat, inside his house.
More 'Lectronics »
Report Listing