North Bay racer Pat Broderick writes, “Here are photos of the Broderick boys, Preston, Elljay and Tyler, ‘Sailing in Place’ (SIP). They enjoyed their day on the wild, windy, wavy driveway very much, although it appears the conditions dismasted their sturdy craft. They called Grandpa’s Towing Service on the VHF, and he showed up with a trailer to save them. They didn’t report any whale sightings, but the neighbor’s cat did come along and took a look. They plan on more SIP adventures in the coming months. Maybe they’ll set up a lawn sprinkler to provide some spray.”

We asked Pat what kind of boat the kids were ‘sailing’. “It’s a Holder 14 (by Hobie Cat/Coleman),” he replied. “The design history is a little interesting. It first came out as the Vagabond 14, designed by Ron Holder, in 1976. In 1982, Hobie bought the design and it became a Holder 14. It was production until 1987 when an ‘improved’ version came out with a pivoting centerboard, with both the centerboard and rudder becoming fiberglass. There were other modifications to the rig, including roller furling. The basic hull remained the same through all the changes. In 1976, Coleman (the camper folks) acquired Coast Catamaran (Hobie Cat). My boat was built after that date, since it includes the Coleman name.”

“Ron Holder designed a bunch of small sailboats,” continues Pat. “Here’s a paragraph from a December 1984 Latitude 38 article that Shimon van Collie wrote about Carl Schumacher: ‘There was more to boats than just sailing, though. “He [Schumacher] was always tinkering,” recalls Newport Beach racer and sailmaker Dave Ullman, who taught at the Balboa YC junior program. Carl started sketching boats at a young age, and he used to build and race model sailboats with Ron Holder (who later designed the trailerable Holder 20). In fact, the drawing board Carl uses today was a Christmas present he received when he was 12. “I set it up in my room,” he recalls, “and just started sketching.”‘”

“There are other ways of ‘sorta’ Sailing in Place,” added Pat. “Here’s Tyler at this year’s Cub Scout Rain Gutter Regatta. Instead of rain gutters they now use blow-up ‘rain gutters’. Tyler put together his ‘Official Boy Scout’ trimaran and blew it down the ‘rain gutter’ — about 50 times that evening.”

Apparently, this Sailing in Place event took place before we were all ordered to Shelter in Place.

In November 1769, the HMS Endeavour, under the command of Captain James Cook, sailed into Maramaratotara Bay, New Zealand, to observe yet another rare astronomical event. Nearly half a year earlier in Tahiti, Cook and his crew had documented the once-in-a-century transit of Venus across the face of the sun. Now in New Zealand, the Endeavour’s astronomers observed Mercury taking the same path.

Cosmological missions aside, one cannot help wondering what it was like for Cook and these sailors, who were the astronauts of their day, to arrive on such strange shores. Was it equivalent to ‘beaming’ down to another planet? Or, was it all just another coast, another beach, another strange and foreign land?

On March 24, my captain and I pulled into the Whitianga Harbour, a port town on the east cost of New Zealand’s North Island. As we approached shore, the natives were bashful. The natives were, in fact, nowhere to be seen. The abundant waterfront pubs were shuttered, dark and empty, and Whitianga was a ghost town. New Zealand was roughly one day into its national lockdown to combat the spread of COVID-19. (Just a few days before, I’d seen an internet meme that read, “I was expecting zombies for the apocalypse. This virus sucks.” Who knew that the end of the world would be marked not by roving bands of marauding pirates, but rather, by a recalcitrant citizenry hoarding toilet paper and Purell?)

Regardless of the state of the world, we were in need of provisions, fuel and water. The marina told us that we could tie up for no more than two hours, but that we were obliged to depart immediately thereafter. (The guidelines governing foreign cruisers traveling in NZ were still evolving, and there was far more gray area than certainty.) Once fueled up, we plotted a course through the dark, quiet waterfront town in search of the grocery store. Over the next few weeks in New Zealand, we would find that big supermarkets observe varying levels of strictness enforced on shoppers. In Whitianga, we found bored teenagers who hadn’t seemed to get the memo that the world was ending.

But surprisingly, we stumbled onto Cook’s footsteps . . .

Given the end-of-the-world vibes, we saw fit to enjoy a cold libation while walking the half mile back from grocery store to boat. I would later cheers the crew of the Endeavour, who were absolutely hammered while they sailed the seven seas and discovered strange, new lands. “The Endeavour sailed with a staggering quantity of booze,” wrote wrote Tony Horwitz in Blue Latitudes: Boldly Going Where Captain Cook Has Gone Before. “Twelve hundred gallons of beer, 1,600 gallons of spirits (brandy, arrack, rum) and 3,032 gallons of wine. The customary ration for a sailor was a gallon of beer a day, or a pint of spirits, diluted with water to make a twice-daily dose of ‘grog.'”

After taking on water, we left the visitors’ dock around 9 p.m. and motored for about 30 minutes to our anchorage. One of the many magical moments afforded by cruising is dropping anchor in the night, and waking up to the sublime.

As I mentioned in Part 1 of this series, I was not trying to follow in the footsteps of Cook, as Horwitz had so meticulously done. Rather, I was accidentally stumbling on a path that was fading in the sand. Because in New Zealand, Captain James Cook is always around the corner.

Living with plague also felt reminiscent of the 18th century. Captain Cook might have been quite at home in our modern-day pandemic, having hailed from a time when disease consistently ravaged the world, and ultimately decimated nearly every “foreign land” the Endeavour visited — as well as Cook’s crew. Stopping in for repairs in Batavia, Indonesia (now Jakarta, where I used to work at an English-language newspaper), the Endeavour’s previously-healthy sailors quickly fell ill. “Batavia’s ubiquitous canals, which doubled as sewers and dumping grounds for dead animals, formed stagnant breeding grounds for mosquitoes and disease,” Horwitz wrote. (I can attest to Jakarta’s inexplicable thoroughfares of still water.) Ships arriving from all over the world brought illnesses of their own.”

Hiking to the top of the cliffs, I was surprised — and not at all surprised — to find Cook.

Keeping up his reputation as the naming-est sailor to travel the oceans, Cook renamed Maramaratotara Bay for the planet that was in his crosshairs. (I’ve also found information that says Mercury Bay’s original name was Te Whanganui o Hei Bay.)

Granted, the idea of ‘naming’ that which has already been named and long inhabited is a tad controversial. But that’s a topic for another time.

Stay tuned for the conclusion of The Book that got Me Hooked on Cook, coming soon. 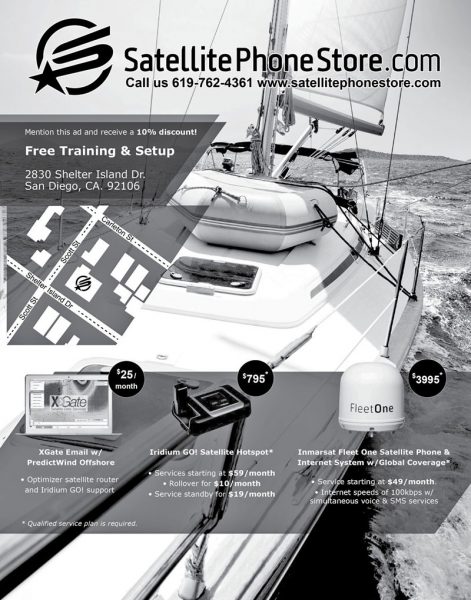 The board of the Singlehanded Sailing Society met Wednesday night. Among key topics of discussion was the fate of near-future races. “The Singlehanded Farallones race, scheduled for May 16, remains on calendar, subject to the May 4 lifting of the current stay-at-home orders and other safety considerations,” they announced yesterday. “The board is reconvening the week of May 4 to consider race possibilities. Attention will also be given to a possible June or July rescheduling of the postponed Round the Rocks race.” Originally scheduled for April 11, Round the Rocks sails a Bay tour course and includes doublehanders as well as singlehanders.

The biennial Singlehanded TransPacific Race was due to start off the deck of Corinthian YC in Tiburon on June 27. Regarding that epic rite of passage, the SSS wrote: “Given the gravity of the recent COVID-19 outbreak, the Singlehanded Sailing Society and registered skippers have concluded that the solo race from Corinthian Yacht Club to Hanalei Bay in Kauai, with events at Nawiliwili Yacht Club, will be delayed until 2021. Factors playing heavily on the minds of the group included the need to not spread infection, the strain the pandemic has already placed on facilities in both locations, plus consideration of the risk of virus exposure to United States Coast Guard personnel in an emergency. The SSS is moving forward to offer an exciting event in 2021 for the singlehanded race to Hawaii.”

Learn more about all of the above at www.sfbaysss.org.

In Weather Routing Inc.’s newsletter, senior meteorologist Amanda Delaney filed this report: “We are approximately a month from the start of the Eastern Pacific Ocean Tropical Cyclone Season.” The season officially begins on May 15 and lasts through November 30. “So how active will the season be this year? Let’s see what factors play into this prediction.

“Tropical cyclones need several conditions in order to develop. These are sea surface temperatures of 26°C [78.8°F] or more, light winds aloft, and abundant atmosphere moisture. If these features are present or are predicted in the future, we can expect an above average season.”

“A weather phenomenon that will help determine whether it will be an above normal or below normal tropical cyclone season is: El Niño, La Niña or neutral phase occurrence through the season,” continues Delaney. “As of April 15, the status of El Niño is warm neutral. Neither El Niño or La Niña is present.

“Normal trade winds exist with cooler-than-normal sea surface temperatures found off Northwestern South America and over the Central Tropical Pacific. Squalls are present to the north of the equator over the Eastern Pacific in this pattern.

“The sea surface temperatures over the Eastern Tropical Pacific are warmer than normal (by 1-3 degrees Celsius and are at or above 26°C).
While it is likely that this neutral phase will continue through the autumn, there is a chance that a weak La Niña could develop toward late summer/early autumn.

“Given the above factors, WRI expects an above average tropical activity for the 2020 East Pacific tropical season, with an anticipated 17-20 named tropical systems.” 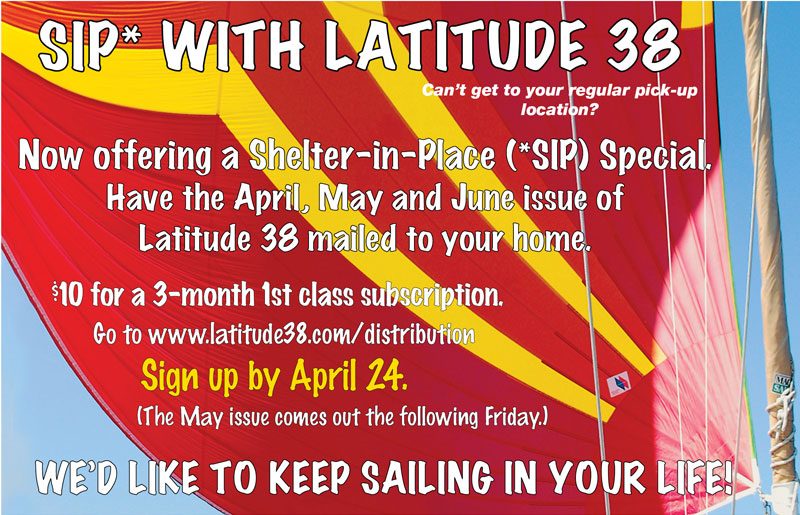 SHARE ON Tweet Share Email Linkedln
1 Comment
Receive emails when 'Lectronic Latitude is updated. SUBSCRIBE
'Lectronic Latitude: Wednesday, Apr 15
The Maritime Icon of Dana Point
The Late Brig ‘Pilgrim’ in Happier Times
Here's an update on the sinking of the 'Pilgrim', the full-scale replica of the merchant brig made famous in Richard Henry Dana's Two Years Before the Mast.
The World Famous L38
Caption Contest(!)
Here's your April Caption Contest(!). Be sure to check out the May issue of Latitude 38 for the winner and top 10 entries.
Sponsored Post
Satellite Phone Store
Satellite phones provide voice, SMS and data services anywhere on the Earth and you don't have to rely on cell phone networks.
While Sheltering in Place
Videos, Webinars, Quizzes and Schedule Updates
We can already see that we've turned the corner on sailing events. Now the announcements of SIP alternatives have outpaced the slowing trickle of cancellations.
ADAPTING
The Cruiser’s Mindset
Read why cruisers are more adaptable to changing conditions in Tim Henry's feature, The Cruisers Mindset, Adapting to Any Conditions.
Last Call for Classy Ads
Classy Classified Deadline Is Today at 5 p.m.
Looking to sell your boat? You can list your sailboat for sale easily online. Deadline for the May issue is TODAY at 5 p.m.
More 'Lectronics »
Report Listing