Moli slowly emerged on the horizon, a bright orange stripe on her mast distinguishing her from the other boats that had gone out to meet her on Saturday. We were on Mike Dodson’s Beneteau 41 NoSnow, and intercepted Randall Reeves and Moli off Ocean Beach, near Mile Rock. About 10 boats congregated, the VHF buzzed with “Welcome home, Randall”s.

We were out here just under 13 months ago, when Reeves departed on what he dubbed the Figure 8 2.0, one of the most inspired and grueling circumnavigations in recent memory. With his return to the Bay, Reeves has sailed somewhere around 39,000 miles, circling both Antarctica and the Americas singlehanded.

In a medium-sized, short-period swell, Reeves and Moli and the flotilla sailed off Ocean Beach, before making a slow turn toward Baker Beach and the mouth of the Bay, timing his entrance to do a sail-by of Point Cavallo, where a crowd was waiting.

We were dropped off at Sausalito Yacht Club, where another crowd was eagerly waiting. And waiting. Reeves was apparently tidying away his sails and preparing fenders and docklines, while his wife Joanna Bloor joked, “Hopefully he hasn’t pulled a Moitessier.” The 41-ft Moli eventually made her way to the dock, and was serenaded by bagpipes — of course.

Once docked, Reeves was handed a microphone and gave thanks to the many people who’d made the Figure 8 possible. “It takes a village,” he said. There were a number of people on the “land-ops team,” Reeves explained, who handled logistics and maintained the immensely popular Figure 8 website.

Once his boots hit the dock, Reeves was instantly whisked into interviews and posed for countless photos. We did our best to make sure that he had a glass of champagne in his hands. At the ceremony was Moli’s former owner Tony Gooch, who presented Reeves with a plaque from the Ocean Cruising Club commemorating Randall’s extraordinary achievement.

Stay tuned for a Figure 8 feature in the November issue of Latitude 38. For now, we will tip our hat to Randall Reeves on a job well done.

Adventure sailor Francis Joyon took advantage of a weather window this weekend to embark on his Asian Tour record attempts. The Frenchman set off Saturday morning at 9:11 UTC on his attempt at the 8,800-mile Mauritius Route record between Port Louis, Brittany, and Port Louis, Mauritius. Sailing solo, the Breton skipper of the 105-ft maxi-trimaran IDEC Sport crossed the start line off the Citadel of Port Louis. Joyon is attempting to better his own time of 26 days, 4 hours and 13 minutes set 10 years ago. To improve on that record, he will have to finish before 13:24 UTC on November 14. In 2014, Lionel Lemonchois attempted to break Joyon’s record, but his boat capsized off Brazil.

“The wind isn’t very strong,” commented Joyon on Saturday. “I’d have liked it to be stronger, but we don’t have the choice, as otherwise we would be facing strong headwinds. I need to pick up a light northerly flow by heading into the westerly winds first. After that, it should be fairly fast down the coast of Portugal and past the Canaries. I’m going to have to weave my way around the Cape Verde Islands. We’re keeping an eye on a low-pressure system forming further south, which risks interrupting the trade winds. That’s why we wanted to start so quickly. The record can be smashed. I may well be a bit behind by the equator, but I hope to make up for that during the rest of the voyage.”

The Mauritius attempt will be Joyon’s longest voyage alone aboard this boat. “It is around the equivalent of three Route du Rhum races,” explained Francis. “There are hardly any moments when you can take the direct route. Ten years ago, I sailed 10,000 miles rather than the 8,800 theoretical miles.”

After the Mauritius leg, a crew will join Joyon for the next three acts of the Asian Tour: Mauritius to Ho Chi Minh City (3,975 miles), Ho Chi Minh to Hong Kong (920 miles), and the Clipper Route between Hong Kong and London (13,000 miles). Follow the Tour at www.idecsport.com/en/category/sailing. Armchair adventurers can also play along at www.idecsport.com/en/asian-tour-virtual-regatta-game. 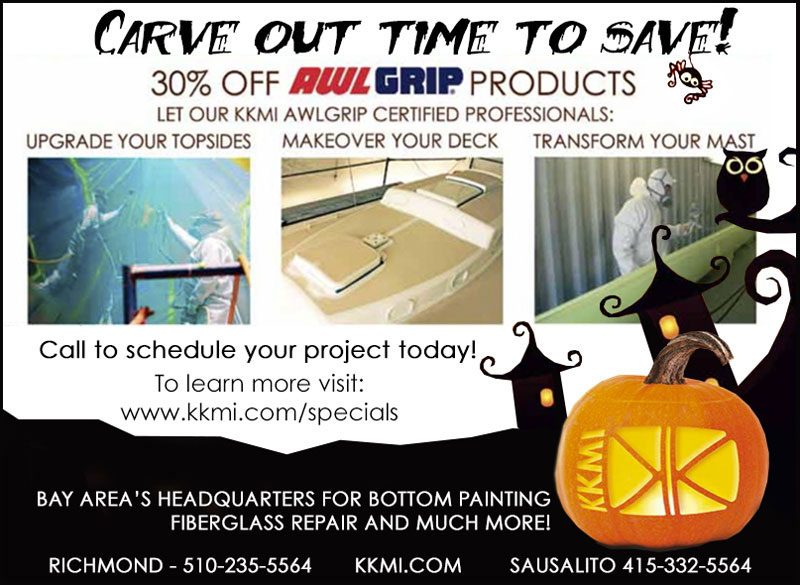 Yesterday marked the official opening of the Siebel Center — a sailing program that aims to increase diversity and opportunity for youth in the sport of sailing — at Treasure Island Sailing Center, or TISC.

“I always look at sailing participation on a pyramid: We have done a great job at growing the base but we have had more difficulties keeping kids and getting them to the top,” said Carisa Harris Adamson, the chairman and one of the founding members of TISC. “Now that we have a complete pathway, I think it will change things for us as we will be able to retain kids, and a more diverse group of kids will follow along that path.”

Last April, US Sailing announced a donation from the Siebel foundation to create the mission-specific sailing centers throughout the country. TISC, which has been providing affordable, if not free, sailing education to underserved children for over 20 years, was an obvious candidate, and is one of three pilot Siebel Centers, along with Columbia Sailing School in Chicago and DC Sail in Washington. Here in the Bay, Alameda Community Sailing Center and the Golden Gate Yacht Club Youth Sailing Foundation will serve as support centers.

“Alameda Community Sailing Center is quite flattered to be selected as one of the Bay Area’s supporting centers to US Sailing’s Siebel Sailors Program,” said ACSC founder Kame Richards. “The focus of the Siebel program matches perfectly with what ACSC has been doing for the last seven years: introducing sailing to the youth of our community, independent of their financial status. The RS Fevas have been selected as the training boat, and they look like the perfect craft, with the right combination of speed and forgiveness.”

The Optimist racing team, formed this summer at TISC, was trying out the brand-new RS Feva XL dinghies provided by the Thomas and Stacey Siebel Foundation. These performance doublehanded dinghies will be the missing link between Optimists and Flying Juniors in the curriculum currently offered at TISC. Chris Childers, the coach for the region who was recently selected by US Sailing, said he’s “looking forward to teaching on small boats with an asymmetric spinnaker,” and excitedly wonders, “What is going to happen to the next generation of sailors when they start out sailing rocket ships like these?” A total of 24 boats — 12 for TISC and 6 for each of the supporting centers — are being donated to the Bay Area Siebel region. “It’s a fleet!” said Carisa enthusiastically. She is looking forward to races with the other centers, and other dinghy sailors throughout the Bay. Despite its being the first time on such boats for most of today’s sailors, docking was uneventful and perfectly mastered. The new Siebel sailors sported huge smiles after their outing.

Tech guru Tom Siebel and his wife Stacey were on hand to meet the small group of new sailors. Tom grew up sailing on Lake Michigan at Sheridan Shores Sailing School in the ’60s — SSSS will serve as a supporting center in the Chicago region. “Nobody consulted me in this decision, and nobody knew I started to sail there either,” he joked. Two more Siebel Centers will be selected by the end of this year, and another five in 2020. Tom dreams of seeing 25 or more one day: “If it can accelerate in the next few years, there is an opportunity to make change happen at a national scale. I think this is hopefully going to fuel sailing.”

Siebel Centers will try to integrate long-term values to sailing instruction, such as how to take proper care of a boat. More broadly, Childers wants “to present as many different sailing opportunities as [we] can to all the kids,” including keelboat experience, different racing settings and career orientation — with the ultimate goal to make “well-rounded water people.” Proving that they are already well aware of good seamanship practices, the Siebel sailors of the day ended the opening ceremony by christening one of the new boats with sparkling beverages. “Welcome this new fleet at Treasure Island Sailing Center!”

But before you just show up, make a list of your flares. Then make an appointment with Wesley Won at (650) 655-6217 or [email protected]. To transport your flares, leave them in the original packaging (if you still have it) or otherwise protect them from moving around. Make sure ignition devices are covered or taped.

SHARE ON Tweet Share Email Linkedln
Receive emails when 'Lectronic Latitude is updated. SUBSCRIBE
'Lectronic Latitude: Friday, Oct 18
Shootin' the Breeze
‘Chubby Girl’ Delay; ‘Matthew Turner’ Testing; More AC75 Foiling Footage
Here are a few newsy nuggets from around the sailing world.
US Sailing Olympic Development Program
US Olympic Sailing Talent Converges on S.F. Bay
Bay Area sailors continue to grow their support for US Sailing programs and participation in the sport at all levels.
Sponsored Post
Great Pumpkin Regatta at Richmond Yacht Club
Great Pumpkin Regatta, October 25-27, at Richmond Yacht Club. Party with costume contest on Saturday night.
Friends from Near and Far
You Meet the Most Amazing Sailors at the Annapolis Boat Show
Beyond the boats and gear, one of the other things we loved about last week's Annapolis Boat Show was the people. They're almost all sailors or want to be.
Sponsored Post
Tiburon Condo for Sale
Tiburon 2 Bed/1 Bath Condo for Sale: $759,000. A bright, beautiful condo in an amazing location. Open House This Sunday, 2-4 p.m.: 10 Andrew Drive #60.
More 'Lectronics »
Report Listing