French record-setter Francis Joyon is heading back out to sea. The winner of the last Route du Rhum, who still holds the crewed round-the-world record (the Jules Verne Trophy) of 40 days and 23 hours, is looking for new adventures with different horizons. In late October, he plans to set sail alone on a voyage aboard the 105-ft IDEC Sport maxi-trimaran.

Marc Van Peteghem and Vincent Lauriot-Prévost designed the boat, built by Multiplast and launched in 2006 for Franck Cammas as Groupama 3. Sailing her under the name Banque Populaire VII, Armel Le Cléac’h smashed several solo records. Then Loïck Peyron won the 10th Route du Rhum aboard her, setting a record time for that transatlantic race in 2014.

This fall, Joyon will attempt to break his own solo Spice Route record from Port Louis to Port Louis. He’ll depart from Port Louis in Brittany, France, and sail to Port Louis on the island of Mauritius in the Indian Ocean. Ten years ago, Joyon set the Port Louis record, a distance of 10,300 miles, averaging 16.4 knots. The mark to beat is 26 days, 4 hours and 13 minutes.

He will then shift to crewed sailing for two brand-new records to Ho Chi Minh City, Vietnam, and then Shenzhen in China, before setting off on the clipper route between Hong Kong and London. The planned Asian Tour will cover a total distance of more than 28,000 miles — the equivalent of sailing around the world. Francis intends to reach London in March 2020.

Things are Going to Cool Down and Get Windy . . .

We’ve been talking a lot about the “heat” here in the Bay Area the last couple of weeks and month, but heat is a relative term when you live in such a temperate climate. Anything over 82 degrees and the San Francisco chapter of Latitude Nation seems in danger of melting. After a dry, hot weekend that felt like a hair dryer was blowing across the Bay, we can expect a return to more seasonal temperatures starting tomorrow — as well as a little bit of wind.

“A weak sea breeze will kick off the shift in the weather and those onshore winds will become more fully developed on Tuesday, pushing temperatures down another 5 to 7 degrees on the coast and in inland valleys,” reported SF Gate.  “We’ll see a significant cool-down by the time we get into Wednesday. We’ll probably struggle to get out of the 60s in San Francisco and other locations out of the 70s,” National Weather Service forecaster Brian Garcia told SF Gate.

Inland, northeasterly breezes are indicative of autumn weather here in Northern California, and the typically gusty conditions also increase the danger of wildfires, which, after the last few years, has us holding our breath, and praying for the first heavy, saturating rains — which are still nowhere to be seen in the forecast. The National Weather Service has issued a “Fire Weather Watch in effect for the North and East Bay hills and mountains late Tuesday night through Thursday afternoon,” SF Gate said.

Some of our favorite West Coast sailors will be at the Annapolis Boat Show later this week. Captain Brian Trautman of SV Delos will be giving a presentation on the “Cost of Cruising” on Friday, October 11, at 10 a.m. at the  Annapolis Waterfront Hotel, “where I recount 10 years of our average cruising costs,” Trautman said on the Delos Facebook page.

“This is a non-ticketed, free event and open to everyone at the Annapolis Boat Show. The Southampton show was packed so get there early. Details are available here,” Trautman said on Facebook.

A recent World Wildlife Fund (WWF) study in Canada found that cruise ships dumped 1.3 billion liters — or nearly 343 million gallons — of wastewater in waters off the British Columbia coast in 2017, according to msn.com. The study, which focused on cruise ships traveling from Washington to Alaska in Canadian waters, said that “the impacts of the sewage (or greywater) range from dead zones for ocean dwellers to suffocating fish, lobster, crab, and other underwater life forms. It also has a large potential impact such as detrimental effects on local ecosystems.”

WWF said that discharging greywater is regulated when ships are close to shore, but once ships are more than three miles offshore, they’re in a legal no man’s land. “We urge Transport Canada [which is similar to the US’s Department of Transportation] to put additional regulations in place around greywater dumping,” said Andrew Dumbrille, WWF-Canada’s senior specialist. “Some companies voluntarily go beyond what is required, but much more is needed across the industry. Transparency can help customers make a difference by supporting companies that keep ocean health in mind.”

In everyday language, the idiom “As the crow flies” means the shortest distance between two points. But in the old days, a crow’s flight gave sailors an actual bearing to land. Coastal ships in Europe — perhaps back as far as the Viking days — often carried one or more caged crows. When it was foggy and/or they were unsure of their position, they would let a crow loose, knowing it would fly straight for the nearest land. The practice of carrying the birds in a cage suspend aloft is also where we get ‘crow’s nest’. 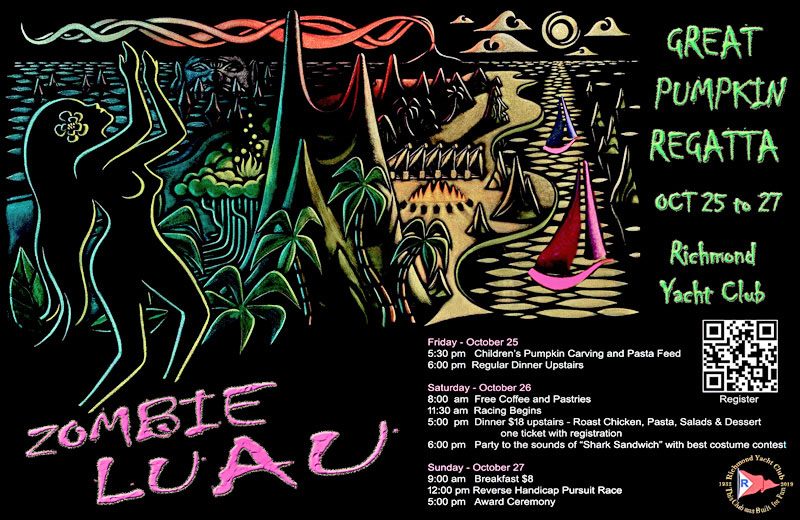 San Francisco Fleet Week kicks off today with a series of public events, including the arrival of military vessels to the Port of San Francisco. Several branches of the Armed Services will offer a variety of ship tours and static displays. Among the ships, the USCG’s Terrell Horne, a 154-ft fast response cutter from Los Angeles, is slated to arrive in San Francisco on Wednesday. Steadfast, a 210-ft medium-endurance USCG cutter from Astoria, OR, is scheduled to arrive on Friday. Additional Coast Guard assets participating include the cutters George Cobb, Pike, Tern, Sockeye, Hawksbill and Dorado; Maritime Safety and Security Team San Francisco; and Stations San Francisco, Rio Vista, Vallejo, Golden Gate and Monterey.

The Coasties will also be on hand to protect the safety and security of participants and on-the-water spectators. “We are looking forward to another exciting Fleet Week and want to remind everyone to be safe while participating in the many events throughout the week,” said Capt. Marie Byrd, the Coast Guard Sector San Francisco commander. “Coast Guard members are standing by ready to respond.”

As captain of the Port of San Francisco, Byrd has enacted a special local regulation for the on-the-water Fleet Week activities on Friday, October 10, through Sunday, October 13. Traffic will be restricted throughout most of the Central Bay from the Golden Gate Bridge, south of Alcatraz, to just south of the Bay Bridge. This is to accommodate the Parade of Ships as vessels pass under the Golden Gate Bridge to their assigned piers. A 500-yard protective zone will also be enforced around each military vessel the entire time they are in port.

The regulated area for safety will also be enforced during air show practice from 12:30 p.m. to 5 p.m. on Thursday and from noon to 4 p.m on Friday, Saturday and Sunday for the air show featuring the Navy’s Blue Angels.

For the awareness of mariners and the public, the above graphics show regulated areas for the Parade of Ships and the Blue Angels respectively. Mariners should monitor VHF channel 16 for up-to-date information regarding these regulated areas.

For more information on this year’s events, contact the San Francisco Fleet Week Association at (415) 306-0911 or visit www.fleetweeksf.org. Mariners can glean safety tips for Fleet Week at www.fleetweeksf.org/safety. Find more info about the protective zones and areas to watch from the water at www.homeport.uscg.mil/port-directory/san-francisco.

And, we’d love to see your photos of Fleet Week (the crowds on the water, the crowds on shore, the air show, the ships). 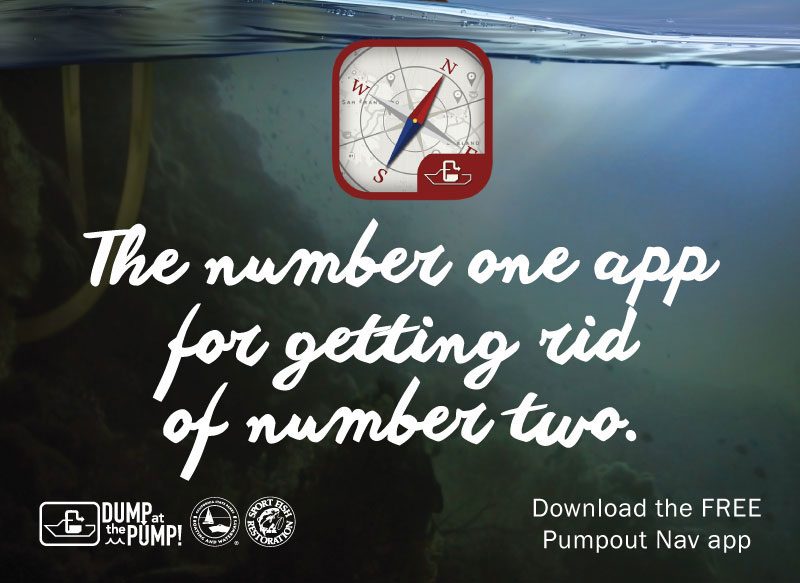 SHARE ON Tweet Share Email Linkedln
Receive emails when 'Lectronic Latitude is updated. SUBSCRIBE
'Lectronic Latitude: Friday, Oct 4
Three Sheets to the Wind
Federal Government to Ban Defecating Near California Coast
In an extraordinary escalation of political power and retribution, the Trump administration has proposed a ban on all defecating within three miles of the California Costal Zone, including “inland Bay waters.”
Personalized Plates
License to Sail
One of the Latitude staff was out in the shoreside world when they stumbled upon this little ditty: Guess what time it is, Latitude Nation?
Sponsored Post
Step Aboard This Hunter 42 at Yacht Fest
This well-maintained, spacious center cockpit Hunter 42 is worth a close look. With two cabins and two heads, it offers very comfortable family or two-couple cruising.
Always Ready
After Quick Coast Guard Search, Boater Found on Land
Yesterday, the Coast Guard began and ended a search for the owner of an unmanned and adrift inflatable west of Crescent City in Northern California.
Race to the French bread
Hurricane Delays Singlehanded Ocean Sailors
After a 14-day delay waiting for Hurricane Lorenzo to move out of the way, 87 boats in the 2019 Mini Transat La Boulangère will start October 5.
Sponsored Post
Special Pricing at Wayfarer Marina
Brand new docks in Marina del Rey at Wayfarer Marina.
More 'Lectronics »
Report Listing