While discussing Latitude 38‘s 2023 calendar last Monday, we were introduced to the word “Friggatriskaidekaphobia.” Have you ever heard of it? It means “Fear of Friday the 13th” — “Frigga” refers to the Norse goddess for whom Friday is named, and “triskaidekaphobia” means fear of the number 13. The word came up because, well, you guessed it, today is Friday the 13th — one of two we will encounter this year, with the second one occurring in October. This made us think about the various superstitions and sayings that are associated with sailing. Some are quite well known, such as renaming a boat being bad luck unless done with an appropriate ceremony, and “Red sky in the morning, sailors take warning. Red sky at night, sailor’s delight,” though this one began in reference to shepherds rather than sailors. We then decided to see what else we could find regarding sailors’ superstitions and discovered several entertaining sayings. Here are a few of our favorites.

When eating or cooking with eggs, the egg shells had to be broken into tiny pieces to deter witches from coming to the ship and sailing in the pieces of shell.

If you lost a hat overboard it was a portent of a long voyage.

Women were considered bad luck on board because they distracted the crew. This would anger the sea, which would take revenge by causing treacherous conditions. However, the sea was quite fickle in that it was calmed by naked women; thus many ships carried figureheads of naked or bare-breasted women.

Whistling aboard a sailing ship is frowned upon as it is said to cause strong winds, and as it has been used as a form of communication among mutinous crew. The one exception was the cook, as while the cook was whistling, he was not eating the food.

Salt could not be passed directly from one crewman to another. It would have to be put down by the one and then picked up by the other.

We’ve all been told “no bananas aboard the boat.” They were believed to cause ships to be lost. This could have come about as many ships that disappeared in the Caribbean in the 1700s were carrying a cargo of bananas. Also, before the age of pesticides, bananas carried all manner of insects and spiders, which could cause death or injury to the crew.

“Start off on the right foot.” Tradition says the left side of the boat has been associated with bad luck or “evil.” Many sailors therefore would step aboard with their right foot first to ensure the voyage started and finished in the right way.

Cats aboard boats are considered good luck. Some believed they could predict the weather. Of course, in the practical application, a cat would take care of rats and mice that crept aboard with cargo or via docklines.

Cutting your hair or nails aboard is said to be bad luck. This explains the bedraggled look sailors adopt after many weeks at sea!

Tattoos and piercings are believed to ward off evil spirits. Specifically, an anchor tattoo was meant to prevent a sailor from floating off if he fell overboard, and a nautical star would help sailors find their way home

Don’t say the following words out loud: drown or any of its derivatives, goodbye, good luck, and pig. The first two are self-explanatory. “Good luck” was believed to cause bad luck. And “pig?” Supposedly, pigs can’t swim

By the way, if you want to know how to pronounce “Friggatriskaidekaphobia,” check out this Youtube clip.

Confucius said, “Do not enter or exit a harbor where you can walk across the entrance.” Or he would if he saw Santa Cruz Harbor today. The harbor that launched Merlin, Santa Cruz 50s, 52s and 70s, and many more deep-draft racing vessels, has shoaled up during the recent winter storms, making it impassable at worst and dangerous at best — unless you’re a surfer. You’ve probably sailed through here. The shoaling is not uncommon or forever, as the harbor dredge is on hand to get the harbor back into shape once winter storms settle down.

Harbormaster Blake Anderson wanted to let everyone know that “any time anyone has a trip planned to Santa Cruz Harbor they should check our website for the latest depth information and/or call the harbor office at (831) 475-6161.”

With more storms and large swells arriving today and lasting through the weekend, we’ll quote the website for the weekend ahead, which has advice for Santa Cruz boats and boats anywhere on the stormy California coast.

Powerful surge conditions in the harbor and breaking surf at the entrance are expected. Please use caution at all times when aboard your vessel or dockside.

It is highly recommended that you check your vessel in advance of the swell. Please ensure that your vessel is secure, drains are clear, pumps are operable, and that dock lines and fenders are in good condition. Lines should be replaced and/or added as needed.

Santa Cruz Harbor is a fantastic destination for anyone cruising the coast, but timing is everything.

Young kiteboarding superstar Daniela Moroz, 22, is again a finalist for US Sailing’s 2022 Rolex Yachtswoman of the Year Award. If she wins this year, it will be back to back with her 2021 title. She also won this distinction in 2019 and in 2016 — when she was only 16.

Residents of the San Francisco Bay Area, Daniela’s parents were competitive windsurfers. She actually sailed in her first race before she was even born. Her windsurfing mom was pregnant with her in August 2000 when she competed in the long-distance San Francisco Classic. Daniela took kiteboarding lessons at Sherman Island (in the Delta) at age 11. She competed in her first race off Crissy Field at age 12.

Finalists for the Rolex Yachtswoman of the Year Award

The six finalists have demonstrated on-the-water excellence at international and national events while representing the USA. Some of these sailors were selected based on their consistent exceptional performances throughout 2022. Some were chosen for wins at major international or national events.

In 2022, Daniela Moroz won gold at the Princesa Sofia Olympic regatta and captured her sixth Kite Foil World Championship title. She also placed first at the French Olympic Week Regatta, held at the 2024 Olympic venue in Marseille. The Formula Kite will make its Olympic debut in the 2024 Summer Games. Moe Roddy interviewed Moroz for a Good Jibes podcast in August 2022. Learn more about Daniela at www.danielamoroz.com.

Sara Stone took first place in the inaugural Bermuda to Newport Doublehanded event as skipper of the only all-female entry. She won the Ida Lewis Distance Race with co-skipper Ken Read. She also took line honors in the youth division of the Newport to Bermuda Race, breaking the youth-racing record as a coach with the MudRatz youth team on board Spitfire.

Finalists for the Rolex Yachtsman of the Year Award

Ravi Parent is the youngest man on the shortlist. In 2022, he became the first sailor to win the A Class Worlds, F18 European Championships and F18 World Championship in the same year. He also won the A Cat Midwinters Championship and the A Class division at the Helly Hansen Sailing World Series. Ravi is a design engineer at Morrelli & Melvin in Newport Beach. He grew up sailing Optis and Lasers, and got into F18 doublehanded cats at age 14. Catamaran Racing News & Design chose him as 2022 Catsailor of the Year.

Doug DeVos was the overall winner of the 2022 TP52 Superseries as the skipper of Quantum Racing. DeVos and team took first place in all four of the series events: the World Championship, Baiona Sailing Week, Royal Cup Scarlino and Barcelona Sailing Week.

Voting groups of past award winners and sailing media journalists will vote for the winners. US Sailing will announce the 2022 Rolex Yachtsman and Yachtswoman of the Year Awards at a presentation at the Sailing Leadership Forum in St. Pete Beach, Florida, on February 2. The forum will be held in conjunction with the US Sailing Association Awards at the TradeWinds Grand Resort. Learn more at www.ussailing.org/competition/awards-trophies/us-sailings-rolex-yachtsman-yachtswoman-of-the-year-awards.

Doesn’t everyone captivated by the sea want to find a way to spend more time on the water? Or, if really fortunate, make it a career? We know many sailors among us work on tugs, ships, ferries, or in the ports and shipyards ringing the Bay. Despite the attraction and the presence of good-paying jobs, the New York Times reports on the shortage of workers in the commercial maritime world. If Latitude 38‘s Job Opportunities section is any indication, we’d say the same is true for recreational marine businesses on the West Coast.

The NY Times reports most of these maritime jobs have traditionally been filled by men, and with male participation in the labor force declining while female participation is climbing, there are many good jobs out there seeking applicants. At sea, the ratio of men to women in the maritime trades is five to one, but with jobs ashore, the ratio is more evenly balanced.

Outside of the commercial maritime trades, there are numerous jobs for craftsmen, yard workers and others servicing the recreational marine industry up and down the coast. The endlessly changing world of the working waterfront is looking for people who want outdoor, hands-on work instead of work with a keyboard and mouse. That could be teaching sailing at a local sailing school, welding sheet metal at a local yard, or crossing an ocean on a ship or tug. There are many jobs for sailors who don’t ever want to get too far from the water. 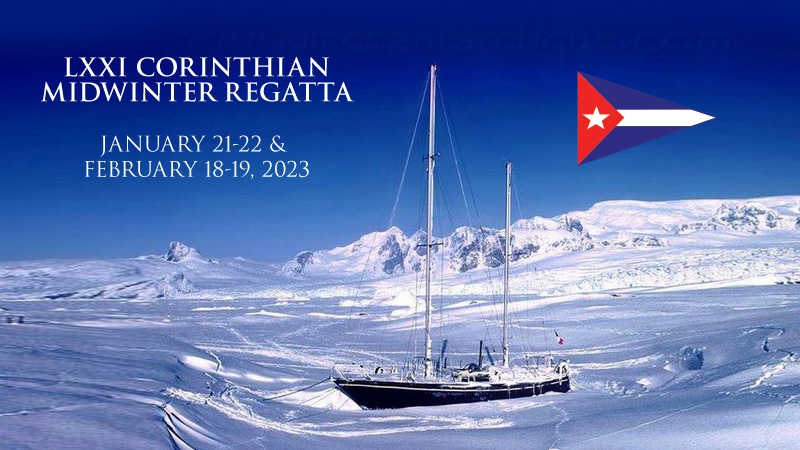 Festivities and Buffet Dinner open to Racers and Non-racers alike!

SHARE ON Tweet Share Email Linkedln
Receive emails when 'Lectronic Latitude is updated. SUBSCRIBE
'Lectronic Latitude: Wednesday, Jan 11
The Rain We've Been Praying For?
Damage and Close Calls on the Waterfront During California Storms
The storms continue to ravage the state and the coast, causing severe damage, loss and close calls for many.
World Famous L38
Caption Contest(!) — The First for 2023!
Welcome to 2023's first Caption Contest(!). This felt like an appropriate photo for the current weather state.
Sponsored Post
Need Fast, Reliable Internet On Your Boat?
Our high-speed fixed wireless base stations and private Bay Area fiber ring offer the reliability, redundancy, and resiliency needed to keep you online, no matter where you call home!
Sailing for Your Ears
Good Jibes #73: Milly Biller on Lifelong 110 Sailing
Milly is the port captain of the Inverness Yacht Club and has been sailing International 110s since childhood.
Sailing Superstar
Bay Area Sports Hall of Fame Member Paul Cayard
Paul Cayard is part of elite company at the SFO Terminal One display of Bay Area sports heroes.
Sponsored Post
San Francisco on the Bay: Dock, Dine, Stay, Play
Discover San Francisco Bay and all that inspires those of us who live or visit here.
More 'Lectronics »
Report Listing