This evening, sailors will gather at St. Francis Yacht Club on the San Francisco Marina. What will they be doing there? Weighing in, checking in and sitting in on a competitors’ briefing for the Rolex Big Boat Series, and learning which divisions will sail for which trophies (and watches).

What can the participants and spectators expect from the regatta to be sailed this Thursday through Sunday?

Andy Schwenk, who needed a medevac during his return delivery from the Pacific Cup due to a severe infection, is out of the hospital. Andy’s Express 37 Spindrift V remains in RBBS, with Bart Hackworth at the helm. Andy will watch the racing from the club, and Spindrift has a docking spot close to Regatta Plaza, so that Andy will be able to get down to the boat in his wheelchair and check in with his team.

Mercifully for the sailors, last week’s intense high-pressure heat wave, which would have been detrimental to exciting racing, has switched off. A low-pressure system has just passed through, and we expect typical San Francisco Cityfront conditions for the regatta. Winds will tend to be lighter for the first race of each day, building as the afternoon progresses. When you start seeing kiteboarders and wing sailors near the Golden Gate, you know the breeze is on!

Latitude 38 has several weather links on our website. A glance at the National Weather Service site reveals a Small Craft Advisory for tomorrow, with winds gusting up to 28 knots. Sunday looks to be the lightest day, with a chance of rain.

We’ll be on-site covering the regatta, and we wish all the sailors a safe, successful and super-fun regatta!

This is Episode #57, and we’re casting off with this week’s host, Nicki Bennett, and Ben Shaw, host of Out The Gate. Out The Gate is a podcast about sailing and adventure on and around San Francisco Bay — and it was a huge inspiration in the creation of Good Jibes.

Ben has been sailing since before he could walk, thanks to his parents, who were crossing oceans in small boats back in the ’60s and ’70s. As a professional journalist, he’s worked as a reporter on Capitol Hill, produced television and radio for National Geographic, and written for multiple sailing rags (including Latitude 38). Ben grew up sailing on Chesapeake Bay, and in his 20s he refurbished the 1969 Allied Luders 33 Baggywrinkle, which he cruised from the Eastern Seaboard to South America and back. He’s currently working on refitting Dovka, a Hallberg-Rassy 352.

Hear how Ben was introduced to sailing at a very young age, why he decided to start the podcast, what he’s learned doing 100+ episodes of the show, about the invaluable sailing community, and about his future boat projects and sailing plans with his family.

This episode covers everything from starting a sailing podcast to the best parts about sailing in the Bay Area. Here’s a small sample:

This past Saturday, Sausalito Community Boating Center hosted its Open Day and first-ever Oyster Festival at Dunphy Park in Sausalito. And while they weren’t able to open their docks to the public, due to some additional requirements from the building inspector, SCBC opted to share the festivities with the Sausalito Cruising Club’s Kids Day. Amid mostly sunny skies and a good breeze, locals and visitors came out to enjoy the fun and sample some fresh oysters.

SCBC secretary Raylene Gorum shared her thoughts on the day.

“As an organization best known for the Herring Festival, it was exciting to test the Oyster Fest as a part of our Open House. We hosted dock tours and knot-tying and safety demos, and had wooden boats (a Bear and a Butterflute) on display, a balloon savvy-clown, a bounce house, and the much-appreciated, oboe-enriched musical stylings of the Hot Clams.”

“Many of our volunteers who give our unique fleet TLC on 2nd Sunday Work Parties were there to support us and celebrate a great day on the Bay together. After enjoying oysters on the half shell and a variety of baked oyster options, many more expressed enthusiasm for the future of the SCBC Oyster Festival in the years ahead.”

“We look forward to joining forces with those prototyping oyster reefs in Richardson Bay and highlighting the ecological gifts that our little bivalve friends bring to our waters,” Gorum added.

The Poobah is putting together the Meet the Fleet book, which will include bios of all the boats entered in the Baja Ha-Ha, and as many photos as possible.

Some of the photos have been great. In fact, one photo sent in by Bryan and Carolyn Kelly of the Santa Cruz-based Cal 46 Willow is so excellent that the Poobah is buying the family — two adults, daughters Marin, Mae, and Rose, and a cat and a dog — a couple of big Domino’s pizzas and a bag of kibble in Cabo for their efforts.

Some of their other shots were good, too. I guess it’s not surprising, as Carolyn is a still photographer.

The Poobah has also received a good number of very acceptable photos. He thanks all of you.

However — and how can the Poobah put this gently? — he’s also received a bunch that are awful. Really awful. Out of focus, subject halfway out of frame, terrible exposure, and itty-bitty size. Sometimes all four in the same photo.

Folks, these photos are for Ha-Ha posterity, and the Poobah wants you looking as good as you possibly can.

The good news is that if you act now, there is still time, and the process is simple:

1. Get into the shade where there is no bright background.
2. Take some photos with your camera phone of the captain, first mate, or both. And label who is who, particularly if both are of the same sex and/or if crew are also in the photos.
3. Send the best two photos at max resolution to [email protected].

The Poobah understands that you’re not professionals, so here are some tips.

1. The subjects need to smile. They are going on the Ha-Ha, not to the gas chamber.
2. If you’re a couple, tilt your heads toward each other. It screams love and affection.
3. Sometimes it helps subjects to relax if they are holding something, like a coffee cup or a hammer. or suddenly turn around and look at the camera.
4. Funny is good, and photos need not be restricted to sailing or head-and-shoulders shots. Check out the photos of Corey Goit and his wife Jennifer at the world’s largest potato Airbnb, or Corey working his best ZZ Top look.

5. When in doubt about how to take a good photo and how to send it to the Poobah, ask any teenage girl. They can complete the entire process is less than two minutes. Seriously.

The Ha-Ha is about fun, so let’s get serious about it!

It’s not often we feature a powerboat in a story, but of course, many of our readers go both ways or end up going to the “dark side” in the course of their boating lives. There were even five powerboats in the No Comprende Division of the 2021 Baja Ha-Ha. For this reason we often have powerboat owners advertising their boats for sale in our Classy Classfieds, with the boat below from our August Classifieds being sold before the magazine even left the delivery pallets!

Due to some logistical challenges and manpower shortages on our August delivery day, we needed someone to watch over the magazines destined for delivery on the Peninsula. Our friend Jim Tull of Passage Nautical offered to stand by our magazines while waiting for the arrival of our delivery driver. What’s a broker to do with a stack of new Latitudes on the side of the road? He picked up the hot-off-the-press issue to breeze through the latest Classifieds. The 36-foot Chris-Craft Constellation stood out as the type of boat a friend and customer had been seeking. He called his customer on the spot and days later, after inspection and survey, a new owner was on board. The boat was sold essentially before the magazine was even delivered.

Being a classic, she’s in need of some work, but we know the readers of Latitude 38 have a great appreciation for the beauty and heritage of wooden boats, and we’re sure she’s going to be restored to keep many friends and family happy on board for years to come.

If you’re looking to buy a boat from our Classy Classifieds, don’t wait too long to pick up an issue: The boats can move quickly. If you’re looking to sell a boat, the deadline to post your boat for sale for our October issue is tomorrow, September 15, at 5 p.m.

After posting your boat for sale you might as well start browsing the brokerage ads and our Classifieds for your next boat. It’s out there somewhere. 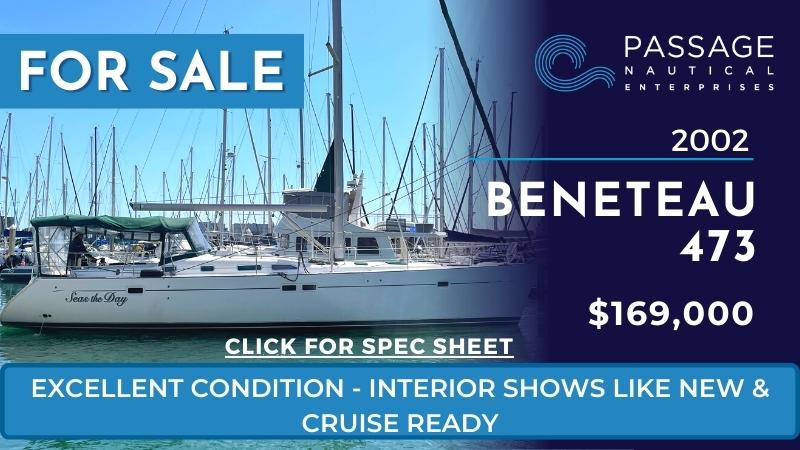