Last month, the UK-based Telegraph ran a piece called “Your 70s Is the Best Decade of Your Life — Meet the Women Who Prove It.” Among the climbers, marathon runners and other septuagenarian female athletes was our favorite “marathon” sailor, Jeanne Socrates, who, at age 77, became the oldest woman to circumnavigate the world solo and unassisted. She accomplished the feat in just 11 months aboard her Swedish-built Najad 38 Nereida, crossing her outbound track in Victoria, BC, in October 2019. Also “for the record,” this was the fourth circumnavigation in a bit over 10 years (and the second nonstop) for Jeanne, who only took up sailing in her late 40s.

Earlier this year, Jeanne returned to Canada after having been stuck in Australia when the country shut down due to COVID. Over the past several months she has been working on Nereida to complete many upgrades and needed repairs, for example, removing and servicing the diesel heater — “… entire exhaust was full of holes and rusty — the project just got bigger!!”

Jeanne had flown to Australia in early 2020 to visit the family of her Australian father, who had been killed in World War 2. While she was there she was able to travel much of the country, doing what she called a land circumnavigation.

She told Australia’s ABC News, “I landed in Australia in February last year and hired a campervan with the plan to spend four months driving around, but by April 2020 I was locked down in Western Australia.” Her time was not wasted, and Jeanne saw much of the state, made many new friends, and had some interesting experiences.

A big “Happy Birthday!” to Ms. Socrates, who turned 80 this week, on August 17, and we look forward to seeing her adventures back on the water.

On August 13-14, Del Rey Yacht Club hosted the United States Optimist Dinghy Association (USODA) West Coast Championship. The three competing divisions are Red, Blue and White, depending on skills, Red being the most skilled level. The kids raced outside Marina del Rey. Conditions started out with lumpy seas and 5-6 knots of breeze on Saturday. After a Race 1 general recall, the race committee shortened the course numerous times until mid-Race 4, when they deleted the last upwind leg. The seas managed to hang around, making it imperative that “one hand for you, one for the boat” was the order of the day.

Sunday the fog rolled in and the committee kept the kids inside until it cleared. The group set some temporary marks, found some wind, ran some practice races in the main channel, and took advantage of the conditions.

After the fog lifted the kids were treated to more wind outside than on Saturday. They reeled off three races in fine fashion with no reduction in course length.

Cooper Keeves, 13, repeated his command of these boats and rattled off six bullets. Cooper won overall honors and the Red Division.

Miles Gordon took second overall and first in Blue Division. Miles was followed (overall) by Gage Christopher, Leticia and Vivi Lagutenko, Helen Hooker-Poletti, Jacob Artof and Timothy Liu. These kids finished in the top 25% of the fleet, qualifying for the 2023 Optimist Team Trials to be held in St. Petersburg, Florida, in February.

Congratulations to all the kids who qualified — keep up the good work!

Complete results are at www.usoda.org/racing. 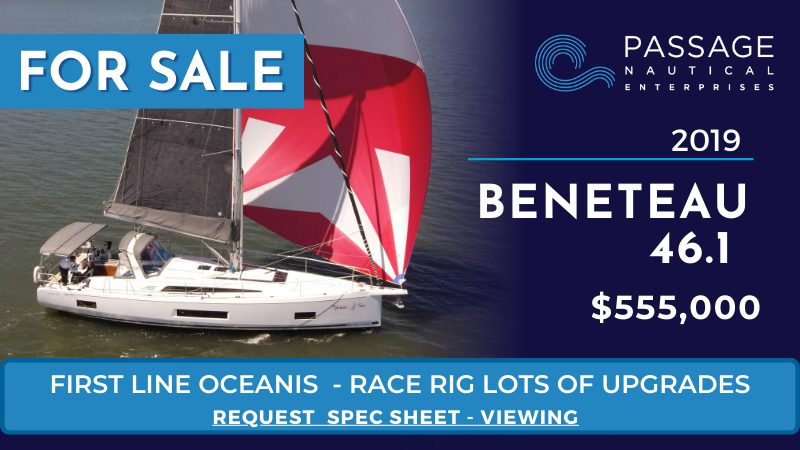 This First Line Oceanis 46.1 is equipped for racing and cruising with just about every option. Point Richmond office. Request specs or schedule a viewing.

“Where is the crew?” We were all asking ourselves the same question. The sun was setting, the bar was warm, the drinks were flowing, and we were all waiting for the crew of our competition to make their appearance to receive our congratulations for a race well sailed. Also our taunts for some questionable moves that we probably should have protested if our red flag had been within reach. Making them buy my crew a round or two would be a better form of justice, under the circumstances. Were they afraid to show their faces?

The post-race schmooze, where everyone gathers in the same place to talk about the same things, is one of the main reasons that club-oriented “beer can” races are still going strong while some other race formats are having hard times. But that crew was depriving us of that weekly pleasure.

So I decided to walk down to the dock to see what the holdup was, and Lee Helm, who absolutely had to explain to their tactician why some of their moves were all wrong, decided to come with me. The surprise was that, even though they had finished ahead of us boat-for-boat, and they had a much shorter route to their berth on the main fairway, they were not anywhere near finished putting their boat away.

“The luff tapes should line up exactly,” instructed their skipper as the foredeck crew and trimmer carefully flaked the jib.

“Don’t you want to be able to see the entire luff before hoisting?” asked the flaker at the luff end. “To make sure there are no twists?”

“Oh, no, that would change the angle into the pre-feeder as the sail goes up,” the owner responded. “It increases the wear on the tape.”

“Aye-aye,” the forward flaker responded with a note of sarcasm, and they undid the first three folds to start over.

Meanwhile, another crew was collecting and coiling the sheets and guys, and piling them into a large bucket while her shipmate fetched the dock hose.

Is it time to reef, put on storm sails, or let out more scope? According to the New York Times there’s a California megastorm headed our way. The only problem is we don’t know when or even if. The story outlines how research scientists have found clearer evidence of megastorms appearing periodically over the centuries and, with the current trajectory of climate change, they believe their likelihood only increases. The result will be storms that allow forecasters to gasp with some of their favorite, gripping terms such as atmospheric river, bomb cyclone, and pineapple express. It does sound ominous.

Yet we are all sailors, and one thing you learn to respect as a sailor is Mother Nature. The last thing we’d do is scoff at weather predictions, suggest that we know better about what Mother Nature is up to, or think about turning our back on such warnings. We’re in the midst of a 20-year drought, and here in Marin, our reservoirs were running woefully low last winter. It didn’t rain much, but one large storm just about filled them up. Great luck, and we hope it continues.

The projected cause of a future megastorm is the warming planet — it lets the atmosphere hold more water vapor, and changing air currents may send this vapor north, where it collides with the coast, heads skyward, and turns into heavy rain or snow or both. As the Times describes, “This vapor plume will be enormous, hundreds of miles wide and more than 1,200 miles long, and seething with ferocious winds. It will be carrying so much water that if you converted it all to liquid, its flow would be about 26 times what the Mississippi River discharges into the Gulf of Mexico at any given moment.” Yikes.

If you’re a skier or a farmer, or sell dock lines and chafing gear, this could sound awesome. Maybe it will be. On the other hand, if you’re a marina operator or an insurance agent, or your farm is behind a levee in the California Delta, there’s plenty to worry about.

However, there’s the whole issue of timing. Is this something we should worry about this winter, or not in our lifetime? Even though weather forecasters are often wrong, we do take them seriously. We’re often wrong too, so few take us seriously.

The projected storms will threaten levees, dams, sailors and essentially all California infrastructure. We’re never sure how much we should be alarmed and prepare for possible planetary events, but we do know Mother Nature will have the final say. It’s always wise for sailors to pay close attention to the weather. We’ll hope for the best and prepare for the worst. 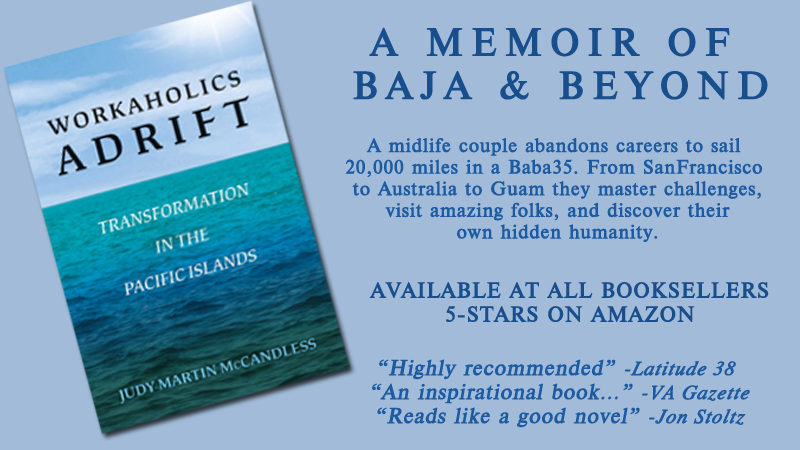 Click the book to find out more and purchase your copy today.

SHARE ON Tweet Share Email Linkedln
Receive emails when 'Lectronic Latitude is updated. SUBSCRIBE
'Lectronic Latitude: Wednesday, Aug 17
Global Solo Challenge
Ronnie Simpson’s New Ride
"In October of 2023, I will be setting sail in the inaugural edition of the Global Solo Challenge race from Spain back to Spain."
See You There
Latitude 38’s Crew List Party — The Best Way To Meet New Sailing Friends
This is the sailing event of the season and will take place on September 1st at the Spaulding Marine Center in Sausalito.
Sponsored Post
‘Workaholics Adrift’ — a Sailing Memoir by Judy McCandless
Click the book to buy or download today.
Sailors' Stories
Good Jibes Episode #53: Brian Crawford on Exploring Shipwrecks
Brian is an author, historian, and open-space activist who has done extensive research on famous and undocumented shipwrecks throughout Marin County.
From the Magazine
The Unique Controversy Over the Proposed Treasure Island Toll
As a new development on Treasure Island blossoms into a new 8,000-home neighborhood smack in the middle of the Bay, local governments are bracing for the corresponding surge in traffic, and are looking for ways to curb congestion.
Performance Dinghy Sailing on the Bay
West Marine US Open Sailing Series Wraps in San Francisco
Olympic class racing is hard to find in the US but the foundation for future success is being built on both coasts with the West Marine US Open Sailing Series.
More 'Lectronics »
Report Listing