“Other boats discovered medical conditions that came out underway, severe seasickness being the most common.

Aboard John Wilkerson’s Washington-based Express 37 Perplexity, crewmember Kirt Hegerberg developed a bloody nose. “Not a big deal except when it goes on for several days. This became a cause for concern. With [only] basic medical supplies and no doctor on board, Perplexity reached out to our medical team for advice. At first, it was ‘Pinch your nose, or pack it; it’ll be fine.’

“As the situation developed, we put out a precautionary call to the fleet for nearby vessels with better ability to deal with this to be on standby to assist. To our immense satisfaction, several boats responded almost immediately with doctors, medical gear and a willingness to meet Perplexity wherever needed.

“Meanwhile, Perplexity continued communication with the Coast Guard and our Medical Team. Ultimately, the US Navy’s Pacific Tracker was dispatched from about 200 miles away to meet up with the stricken crewmember for treatment or evacuation.

“Early Sunday night, Perplexity and Pacific Tracker met a few hundred miles offshore. The 660-ft Navy vessel sent an inflatable over for what the skipper described as a smooth transfer. (From the image of the ship, we’re surprised they didn’t have a teleporter!)”

“As of this writing, Navy and Coast Guard are consulting on how best to get the patient to shore. His condition is good.

“Our thanks to the US Navy, Coast Guard, George Washington University, and the several participants willing to interrupt their race to render assistance. With huge thanks from Perplexity as well, which is returning to racing.” Paul Kamen of Berkeley is listed as crew on Perplexity, but we’d be willing to bet he’s their navigator.

Check out the latest standings here: https://2022.pacificcup.org/standings. Stuart Dahlgren’s Victoria, BC-based Santa Cruz 70 Westerly is ahead of Roy Disney’s San Diego-based turbo Volvo 70 Pyewacket 70, though the latter is out in front of everyone according to the YB Tracker. Their division started on Friday.

Kahuna and Cassiopeia have joined Wizard and Circe in dropping out of the race. On Saturday, Ronnie Simpson reported that, “Kit Wegman’s Islander 36 Cassiopeia has made the decision to retire from the race and head back to port. Going slower than anticipated, the crew could foresee logistical, travel, work and food/water challenges, and has decided to pack it in and head home. All on board are safe, with no problems to report.”

You can read texts from the fleet at https://pcup.org/publicfeed.php. Andrew Koch, navigator on the Seattle-based R/P 55 Zvi, filed this report from 32° 46.324′ N 136° 9.133′ W at 8:41 PDT this morning: “Second backdown of the day during the position report. Lots of fishing. Nets, trash, bags, totes and debris. We had a 1/2-in line on the keel and some smaller line on the rudder. Second backdown was a large trash bag clump.”

“Seems like our location on the course has lots of debris on it. We dodged a huge fishing net just before sunset and have seen [a] large concentration of fishing related items. Excellent downwind sailing for much of the day with lighter breeze overnight. Lots of commercial traffic, and we finally had a visual [of] a sailboat mast, as we are now sailing through the early starters. Crew is in good spirits and pushing hard to Hawaii.”

Welcome to the July Caption Contest(!). We love innovation, and this month’s photo takes us to new heights. 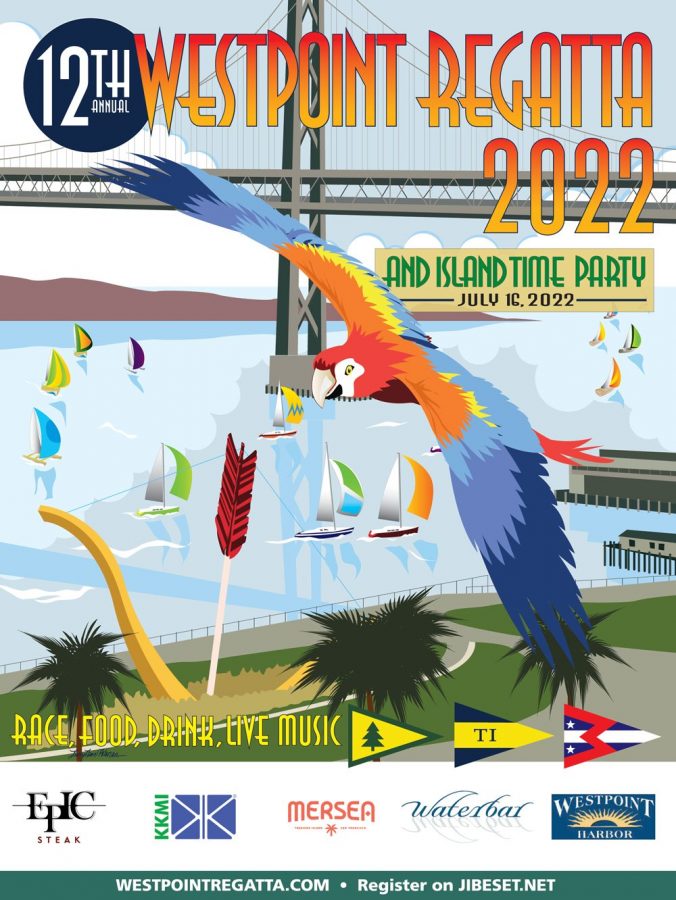 Westpoint Regatta is an annual yacht racing event run by the Sequoia Yacht Club, The Club at Westpoint, and Treasure Island Yacht Club.

The race is the fastest growing race in San Francisco Bay because it is fun, fast, and starts and ends with great parties. It is part of the YRA Weekend Regatta Series. Saturday, July 16th, 2022 with a pre-race party at Treasure Island YC, post-race at The Club at Westpoint. Registration is now open. Sign up on Jibeset.

On a recent visit to Alameda, we stopped by the Alameda Marina condo development in search of the proposed boatyard. The once-thriving maritime trade center is heading full-tilt toward relieving Alameda’s housing shortage while also, apparently, relieving Alameda of its maritime heritage. There’s a long way to go on this project and we’ll hope the planned and city-approved commercial maritime center emerges in the midst of the housing complex. Though it’s hard to imagine true, maritime industry happily coexisting alongside family housing and latte shops.

Waterfront property is cherished by developers who can sell or rent the finished product at higher prices than the exact same condo structure just a few blocks inland. However, this steady erosion of space along the waterfront is increasingly depriving all Bay Area residents of the space for Bay access and maritime trades and services. The maritime trades provide the essential support for everyone’s enjoyment of the region’s best feature — the Bay.

Cities need tax revenue and a plan to alleviate the region’s housing shortage, but there are many land options for housing that are simply not options for the maritime businesses. Watching our waterfront transition from waterfront activities to waterfront “lifestyle” is sadly too heavy on “style” and short on “life,” once again reminding us of Joni Mitchell singing, “They paved paradise, put up a parking lot … They took all the trees, Put ’em in a tree museum …”

The Alameda Marina is a long way from finished, so sailors can still hope to see the promised return of sail lofts, riggers, boatyard, metal shops, paint shops, chandlers, maritime electronics and many other maritime services and jobs that kept Alameda at the hub of a thriving Bay Area sailing scene. Our imagination may be limited, but we struggle to envision the happy marriage of commercial maritime businesses in the midst of this shiny, new housing development. Consider the following video posted by the Sausalito Working Waterfront Coalition, a group dedicated to ensuring that Sausalito’s housing solutions don’t displace critical maritime infrastructure in Sausalito. Who wants to buy a brand-new waterfront condo and listen to this?:

It’s easier to see nautical gift shops with anchor and lighthouse pillows or potholders and sailing notecards for sale, rather than welding and metal-grinding shops.

We hope we’re wrong, but only time will tell.

Say “yacht club” to the “person on the street” and they think ascots, megayachts, blue blazers and hoity-toity social affairs. That’s true on occasion, but far rarer than the many more casual clubs that simply help like-minded sailors find space on the waterfront to go sailing with friends. The approximately 110 clubs in the Northern California Pacific Interclub Yachting Association (PICYA) run the full spectrum of membership styles, and, regardless of style, clubs are united by a common commitment to sailing. This is the reason we enjoy all the clubs we get a chance to visit.

We appreciate the low-key nature of smaller, volunteer clubs that are a gathering place for sailors and good times. We thought we’d offer a little “yachting attire” (a Latitude 38 hat) to the first Northern California “yachtsperson” who can tell us in our comments section below which local club is home to the members’ refrigerator/freezer pictured here.

Dues at this club are $75/month, which is the price we found online for a Brooks Brothers Ascot.

There are more expensive and less expensive clubs in the Bay Area, so we’re sure you can find one that’s right for you. They’re all a lot of fun, and when you join one, and with reciprocal privileges, you really join almost all of them.

If you’re ready to embrace your inner “yachtsperson” you can visit the Pacific Interclub Yachting Association website to find one that suits you. (Ascots not included.)

SHARE ON Tweet Share Email Linkedln
Receive emails when 'Lectronic Latitude is updated. SUBSCRIBE
'Lectronic Latitude: Friday, Jul 8
Boat-in Destination Goes Up in Flames
Fire Destroys Moore’s Riverboat in the Delta
Moore's Riverboat fell victim to the flames in the pre-dawn hours of Wednesday, July 6.
Update
The Dutch Bridge Too Small (and Too Far) for Jeff Bezos Will Not Be Dismantled
Holland's 95-year-old, decommissioned Koningshaven railway bridge will not be temporarily dismantled to make way for Jeff Bezos' new superyacht.
Sponsored Post
Don’t Miss the West Point Regatta
Join the fastest growing race in San Francisco Bay — it's fun, it's fast, and it starts and ends with great parties.
The Exodus to Hawaii
The Vic-Maui Race Started This Week Too
As the last of the Pacific Cup divisions boats depart San Francisco today, we see another dozen boats bound for Hawaii in the Vic-Maui Race.
Seabird Sightings
San Francisco Bay’s Cold Water Means Abundant Anchovies and Pelicans
Frequent pelican sightings are the result of an abundant anchovy fish population.
Good Question
Something to Ponder Over the Weekend … What’s a Blooper?
Ever heard of a "blooper" in sailing?
Sponsored Post
San Francisco on the Bay: Dock, Dine, Stay, Play
Discover San Francisco Bay and all that inspires those of us who live or visit here.
More 'Lectronics »
Report Listing