In the Northwest, the middle of October signifies the coming of fall, which usually entails bigger breezes and rapidly changing weather. This year was no exception during the staging of the PSSC Regatta on Puget Sound off Shilshole Marina.

The race committee, ably led by veteran PRO Charley Rathkopf, staged the first race on Saturday, October 9, in a shifty southeasterly (a highly unusual direction for Puget Sound) before pulling the plug and waiting for the forecast — and more normal — northerly to fill in across the course. And fill in it did. Saturday afternoon’s two races were held in breezy, lumpy conditions, with peak gusts in the low 30s. Some of the sportboats reported their best boat speeds in years, notably the J/80 and J/105 fleets.

Sunday dawned calmer, with two more races conducted over the course of the day, featuring flat water and consistent — and much lighter — northerlies.

The event was also the fleet championship for the fast-growing J/80 fleet. Congratulations go out to John Sezer on Reckless for their hard-earned win. Other winners included Bucky Rezaback skippering the J/105 Insubordination to a solid win in that always-competitive fleet, and Matt Macgregor winning the resurgent Melges 24 class on Good Enough. Find full results at http://racing.cycseattle.org/results/2021_specific/pssc.html.

Corinthian Yacht Club of Seattle has been testing implementation of MarkSetBots for start/finish marks and weather marks. So far the jury is out on their utility (occasionally they do ‘go rogue’). But the club remains committed to innovation and continued testing, and use is highly likely.

The regatta signified one of the first (somewhat) post-COVID and larger social events in the newly renovated CYC Shilshole clubhouse. By all measures, this year’s PSSC was truly a celebration of fall, safe sailing in the Northwest, and the joy we all take from being with one another on the water.

Welcome aboard Good Jibes! In this week’s episode host Ryan Foland chats with Joseph Mouzon about getting outdoors and breaking barriers. Joseph is COO of Outdoor Afro, an organization that celebrates and inspires black connections and leadership in nature — and he’s excited to get more people sailing.

Hear how to best enjoy the outdoors, about leadership skills to apply to life, why it’s beneficial to try something new, how sailing is about confidence, and his “welcome to sailing” moment on a Sunfish in Barbados. Learn more at OutdoorAfro.com. 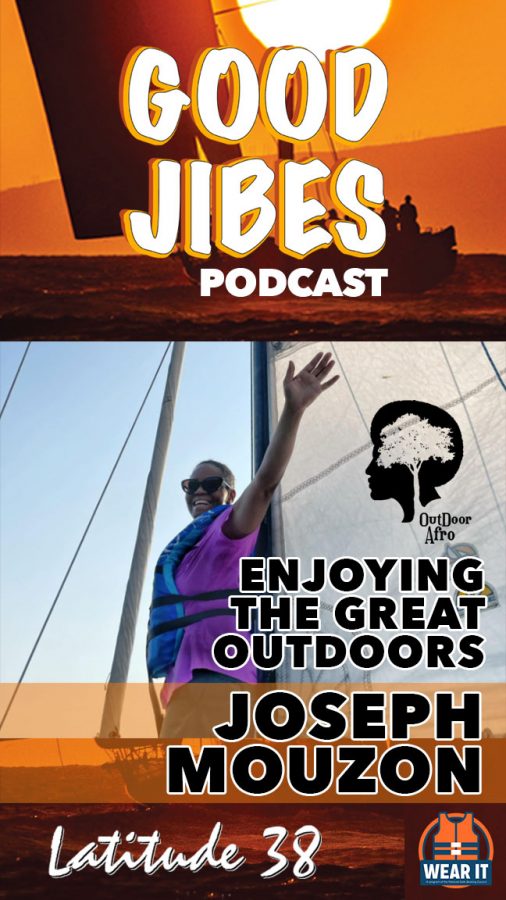 Listen to this and previous episodes on Apple Podcasts, Spotify, Google Podcasts, and your other favorite podcast spots – follow and leave a five-star review if you’re feeling the Good Jibes!

Last Wednesday, October 6, the Cruising Club of America, San Francisco Station (SAF) held their monthly meeting at the Spaulding Marine Center in Sausalito. According to one member, it was the first in-person gathering to be held for some time, and certainly the largest since Christmas two years ago. The evening’s feature was a slide presentation by PICYA Historian of the Year, Ron Young — “They Came for the Gold, They Stayed for the Yachting.”

The evening’s host, Jim Quanci, presented, in turn, Spaulding’s president Bill Edinger, who spoke about the progress of the organization’s Pelican Project and Boatworks 101 marine apprenticeship program, and Stan Honey. who gave a humorous account of his time aboard the Ultim class Gitana 17. Stan spent four days aboard the 100-ft French foiling trimaran in his capacity as navigator while the vessel ‘flew’ from France to Ireland, to the Azores, and back again. Stan had brought along some slides of Gitana 17 and said of the enormous-looking sailboat, which seemed to glide above rather than in the water, “It’s not as crazy or unsafe as it would appear on this boat,” adding that the most important piece of safety equipment was a personal MOB AIS beacon tucked into the crew members’ outermost pocket.

Next on the agenda was Mary Crowley from Ocean Voyages Institute, who updated the members on the progress of Project Kaisei. Despite some recent vessel issues, the organization continues to collect tons of “ghost” fishing nets from the ocean. Mary also announced they have secured support for the project from Matson.

The last item on the agenda was also the highlight: Ron Young’s “They Came for the Gold, They Stayed for the Yachting.” Ron shared his findings on the history of yachting in San Francisco Bay. Ron’s slide presentation covered the beginnings of yacht racing in the Bay Area and the advent of the San Francisco and St. Francis yacht clubs. His greatest focus, however, was in locating the original site of the San Francisco Yacht Club.

“It took me 10 years to locate the building,” Ron later shared.

Although the SFYC’s very first location was in Sausalito, where the Trident restaurant now stands, Ron was committed to finding the site of the original clubhouse in San Francisco, and as part of his research spent many hours trolling through archives at the city library and the San Francisco Historical Society on Mission St.

Here are a couple of other fun facts divulged during the presentation:

Ron added, “Yacht clubs were formed to add order to racing; then they became social.”

One more fun fact: Ron Young was a Sea Scout throughout his teenage years, from around age 13.

Everyone dreams of having a bigger boat — right? In a world where we’re told bigger is better, it’s always refreshing to find folks who appreciate sailing regardless of boat size. In fact, most large-boat owners started out small and hang on to a nostalgia for their early boats even as they move up to the increased comfort, accommodation and range of larger boats.

John went on to say, “The Lido is kinda timeless, and such a spacious and pleasant daysailer.”

We did have to ask about his larger boat, the 1989 three-cabin Catalina 42 Splash, which he’s owned in Southern California since 2004. He keeps her docked at Yacht Haven Marina in Wilmington (in the Port of Los Angeles), adding, “It’s a great little marina, and only three and a half hours from Big Geiger Cove at Catalina, including 45 minutes motoring out to Angel’s Gate. The hailing port is Alamitos Bay, CA. Though it’s never been docked there, it’s a tribute to where I grew up and learned to sail.”

Griffith goes on to say, “Like all boat owners (I think), I spend a lot of time looking at boats for sale, looking for my ‘next boat’, but so far haven’t seen anything that fits us better. Those two solar panels above the davits power our large 12V DC fridge-freezer, induction cooktop, TV, stereo, phones, computers, and all house needs (‘electrify everything’). And they keep the starting battery topped off. I have 660 amp hours in reserve and have never dropped below 580Ah, even using everything. We like Splash, with a very comfortable interior, and love the open transom. We’re hoping to spend December through February aboard at either Catalina or points south.”

When not sailing his Lido 14 on Lake Superior or his Catalina 42 in Southern California, Griffith is a bird conservationist. The Bay View Boat Club has helped recently with access to their Bradford Island property in the Delta, where Griffith is protecting some endangered Bell’s vireos. He also manufactures the FlopStopper to make sure rock ‘n’ roll is only something you dance to, and not something you have to try to sleep with.

Are you nostalgic for a small boat from your past?

Want to sell your boat? Don’t delay. The November-issue Classy Classifieds deadline is October 15, at 5 p.m. 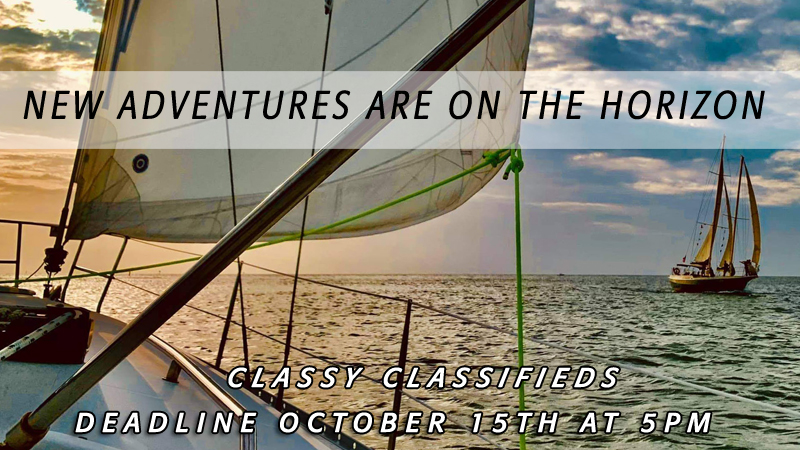 Or place a FREE AD – Online only, here: https://www.latitude38.com/adverts/add-classy-online-only/

SHARE ON Tweet Share Email Linkedln
Receive emails when 'Lectronic Latitude is updated. SUBSCRIBE
'Lectronic Latitude: Monday, Oct 11
Look Up!
Fleet Week Air Show and Sailboats — What a Way to Spend the Weekend!
The US Navy's Blue Angels and a variety of aircraft blazed across the sky over San Francisco Bay for the 2021 Fleet Week Air Show.
What Say You?
October’s Caption Contest(!)
Get amongst it!
Sponsored Post
Westwind Boat Detailing Offers Washing, Waxing and Varnishing
Washing, waxing, varnishing. “Everything looks great! It was a huge relief."
Spanish Flying Lessons
SailGP Makes a Splash in Spain
It was a “Zap,” “Pow” and “Kabam” weekend in Cádiz, Andalusia, Spain, as SailGP’s flying foiling circus delivered action in spades.
A Maritime History Lesson
Max Ebb Explores Columbus’s Navigational Claims
Columbus Day reminded us of the time Max Ebb and Lee Helm tried to educate each other about the veracity of the explorer's claims to nautical fame.
More 'Lectronics »
Report Listing