As events slowly re-open, we are excited to announce that we have a Latitude 38 crew list party on the calendar for September 9, at the Bay Model in Sausalito. As we began to plan our first event in 18 months, we started to wonder how many sailing partnerships, friendships, and work relationships have formed at our crew parties, and how those dots connect and expand as time passes.

Our last crew party was on March 5, 2020, 10 days before the pandemic paused the world as we knew it, specifically large gatherings and in-person events. Despite circulating headlines, Golden Gate Yacht Club was packed that evening with sailors of all ages and levels of experience hoping to connect with other sailors. Mitchell Andrus and Quincy Cummings of Q & M Travels offered a free passage to nine people across the Bay from Berkeley Marina to GGYC aboard their Kelly-Peterson 46 Esprit, showing up in a style fitting for a Latitude 38 crew party. As we flipped through the photos from that night, we realized that was likely the last in-person event for many familiar faces.

Did you form a relationship at the last party that grew, despite the pandemic?

The previous fall crew party in September 2019 is where I first met now-friends Quincy and Mitch. New to both the Bay and sailing, I was eager to make friends in the sailing community. Though our boats were docked near each other’s at Berkeley Marina, and we had many mutual friends, we first met while mingling at that crew party. A friendship formed and grew to include sailing, socially distanced hangouts, and collaborations with a few other local female sailors on a cookbook project called Women on the Water. Mitch went on to interview me on my galley renovation project for his article on pandemic boat work for the March 2021 issue of Latitude 38.

At that same fall 2019 crew party, Quincy and Mitch introduced Audrey and Garrett Ruhland of Thisldu to Ben Shaw of Out The Gate Sailing, and they went on to be guests on his podcast. Audrey and Garrett left the Gate and turned left one month later, heading south on their cruising journey. Their plans, as most this last year, were disrupted by the pandemic. Catch up with Audrey and Garrett’s sailing adventures through the pandemic and beyond in this month’s Changes in Latitudes.

We know there are likely many more stories of paths crossing and relationships forming at crew parties, both on and off the water. Since the goal is to connect the sailing community, we would love to know if you have a crew list party connection story. Perhaps you sailed off on a grand adventure, met the love of your life, or got a great job. The world is large, but the sailing community makes it feel small, especially in the tight-knit community we have around the Bay.

Send your crew party stories to [email protected] and don’t forget to mark your calendar for our upcoming crew list party, September 9, 6:00 to 9:00 p.m. at the Bay Model in Sausalito. Can’t wait to sail? Find a ride by putting your name on our Crew List now.

The 2021 Transpac is off! The first seven boats started yesterday. They’re currently facing light southerlies as they look to escape the L.A. basin and find the breeze.

While waiting for fleets to get some traction on the racecourse, reader Rodney Morgan, who sails with Captain Dave Fullerton aboard the Express 37 Mudshark, sent in a note reminiscing about close Transpac finishes. He wrote in saying, “I’ve been going through Transpac records — what fun. I’ve been trying to find a closer one-design finish than that of the Olson 40s Prime Time and Spellbound in the 1983 race. Granted, sleds and the IOR were a terrible mix for handicapping. Prime Time gave Spellbound all of 22 minutes, 42 seconds over the course — one minute for every 99 miles. Spellbound ended up finishing in front by 46 seconds after 2,225 miles!”

Rodney described the finish. “The 46 seconds equaled three swells, where Prime Time, starboard pole and on layline, stalked for a couple of hours.” Spellbound, with Rodney aboard, on port pole and running out of jibe time, went for it. “We rounded down hard, jibed in the windless trough, and came back up on the same swell and pointed to the finish. The round-down threw Greg Paxton off the helm and into the Channel, only to be scooped back up by hanging on to the tiller. Pretty darn exciting it was. Downwind, we could hear the Prime Time crew cheering when we crashed and a collective groan as we righted and took off.

“Now, ’83 may have been the high point for actual ‘one-design’. There were 12 very similar Santa Cruz boats racing, with 11 finishing within 12 and a half hours of one another — not likely to happen again. Do you have any insights as to a closer finish between similar racers in a long-distance race?”

Curiously, we just wrote a story about the 1981 Transpac when, once again, 46 seconds made all the difference. In that Transpac, Merlin, chartered by San Diego Yacht Club staff commodore Nicholas Frazee, missed out on breaking Merlin’s standing Transpac record by 46 seconds.

You can read the full story of the 1983 Transpac here. If you are sailing in the 2021 Transpac, just remember: Every jibe counts. Despite the finish line being about 2,250 miles away, the race could come down to 46 seconds (or less?) at the finish. 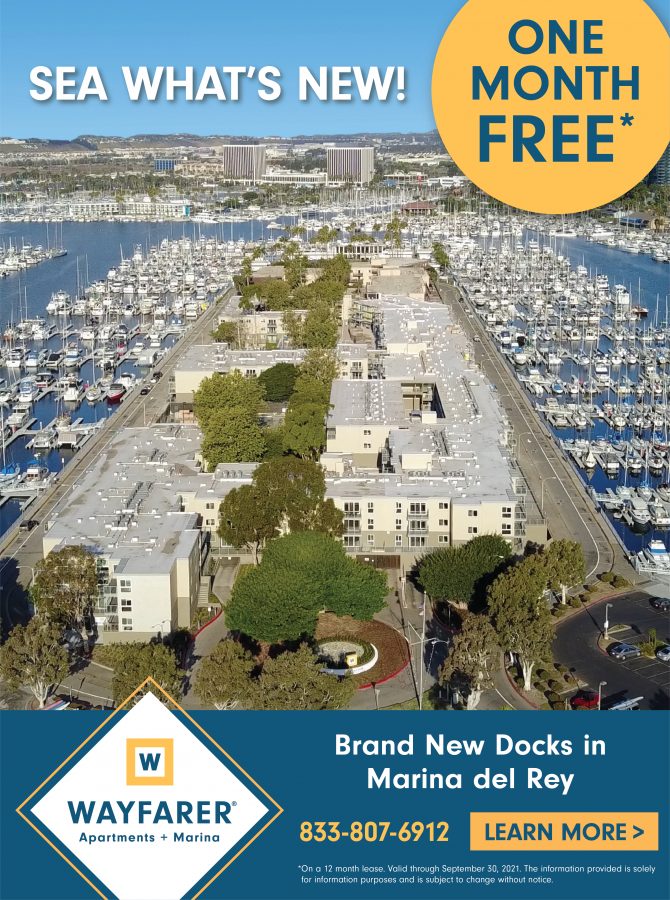 Due to COVID restrictions still in place in Hawaii, the Singlehanded Sailing Society volunteers were unable to find a venue to host the awards for the Singlehanded Transpacific Yacht Race on July 10. (Nawiliwili Yacht Club had hosted the last couple of editions.) So the volunteers, solo sailors and various family members and supporters went to a park in Hanalei. They put together a couple of picnic tables, gathered food to go from various sources around town, and had an absolutely lovely DIY event. It was a day that exemplified the can-do spirit of the organization.

Because the event was held at Black Pot Beach, we thought it would be fun to recreate this photo from the first race in 1978.

The perpetual trophies are numerous and impressive. But when race chair Brian Boschma handed out the first prize, it was the MacGyver award.

The next award went to the final finisher.

We’ll have much more in the August issue of Latitude 38; in the meantime, check out the standings here. Green Buffalo, Perplexity and Northern Star are now sailing back to the West Coast with tracking; check out their progress here. The Cal 40 Green Buffalo returns to Richmond, while the other two are heading for the Seattle area.

Check your mailboxes, Ha-Ha sailors; the 2021 Baja Ha-Ha packets are on their way! With148 boats signed up, that’s a lot of packets.

Inside you’ll find the 2021 burgee — a beautiful red — and this year’s First Timer’s Guide. One big difference we think you might like is that instead of having a dozen or so loose flyers to keep track of for all your Baja Ha-Ha specials, the flyers are now printed in the First Timer’s Guide.

While you’re waiting for the mail to arrive, you can check out the First Timer’s Guide online — you can even download a copy. And remember, this booklet is not only for first-time Ha-Ha participants. Each year there’s a new edition in which you’ll find a wealth of updated information, tips, and helpful advice from our sponsors and hosts, all the way from San Francisco to La Paz.

The Baja Ha-Ha is a two-week cruisers rally from San Diego to Cabo San Lucas, which takes place every fall. If you haven’t signed up yet, there’s still time. The deadline for all entries and information to be received by the Baja Ha-Ha Rally Committee is Wednesday,  September 1 at 5 p.m. — this includes all bios, photos, and payment, as well as online Owner or Skipper’s Waivers and Crew Waivers from each crew member. So if you’re on the fence still thinking, get down and just do it! You can find answers to frequently asked questions on the How To & FAQ page. And you can sign up here.

Are you looking at selling your boat? Don’t delay. The August-issue Classy Classifieds deadline is tomorrow! Thursday, July 15 at 5 p.m. 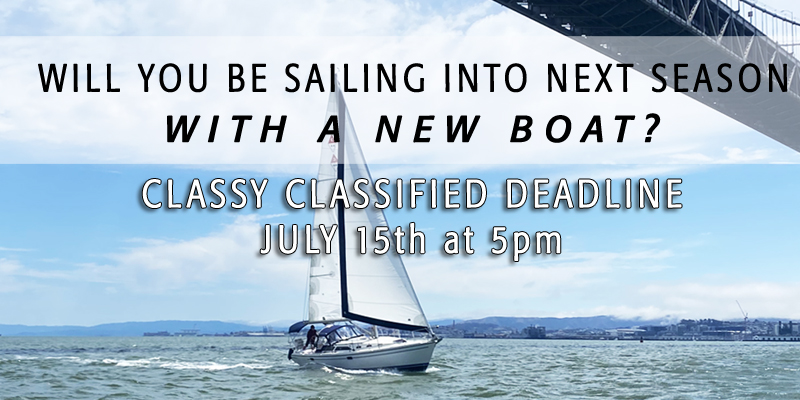 Or place a FREE AD – Online only, here: https://www.latitude38.com/adverts/add-classy-online-only/

SHARE ON Tweet Share Email Linkedln
Receive emails when 'Lectronic Latitude is updated. SUBSCRIBE
'Lectronic Latitude: Monday, Jul 12
Recovering a Grounded Sailboat
Update on the Demise of ‘Aequus’
On July 4 it appeared that S/V Aequus was a lost ship. But later that week she was recovered by a crew from TowBoatUs Ventura & Channel Islands.
GREEN IS NICE
Sailing Is Greening the Blue Planet
As much of the sailing world continues its drive toward a more sustainable future, SailGP has made a huge commitment to rebalancing the equation.
Sponsored Post
Dump at the Pump with Division of Boating and Waterways’ ‘Pumpout Nav’ App
Find your nearest pumpout and floating restrooms with DBW's 'Pumpout Nav' app.
Cruisers Keep on Cruising
Where Are They Now? Cruise Notes from ‘Changes in Latitudes’
After a long year, more and more cruisers are finally starting to up-anchor again to go cruising.
Saving the Sea of Cortez
Celebrate Shark Week with a World Premiere Film from Mexico
The film captures the work between scientists and fishermen to restore and protect sharks and their marine ecosystems in Baja California.
More 'Lectronics »
Report Listing