Cinde Lou Delmas of the Alerion 38 Another Girl sent us this shot taken by Kellie Ann Taylor of dogs watching dogs during the daytime dogwatch in Richmond Yacht Club’s Wednesday night beer can series last week.

Cinde Lou wrote to say, “Things are starting back — oh, so fun!

“Xunaan (goddess of the water in Mayan, foreground) on Another Girl talking to Cali on Carmelita, owned and skippered by Chris Lewis. Xunaan is a Portuguese water dog and, like Cali, she does not shed. Cali is a Woodle: Wheaton terrier and poodle mix. Both of these furry foredeck crew love to race and sail. Cali goes fishing too! She likes being forward and comes back when they tack.”

While ‘Caution’ flags continue to fly around the waterfront, the careful protocols of racers and race committees plus the increasing vaccination rate among the sailing population are resulting in better racing and sailing than last year. For dogs and people. If you haven’t registered for your local evening beer can series, now is the time. Find one near you here.

Our recent photo of Kirk and Char Wagner’s boat Freedom, and her dinghy resting ashore, prompted a question on where the photo was taken. Well, we sure did get a lot of responses.

Most readers guessed the location was somewhere in the Sea of Cortez — Chris Boome for example gave the Sea of Cortez as his chosen location. Probably a safe bet given the layers of hills, or mountains in the background.

Pat McIntosh got very descriptive with, “That sure looks like the beach in Puerto Balandra looking west, out the entrance to the Sea of Cortez and the town of Loreto someplace in the distance.”

… as did Brian Timpe — “South end of Isla Coronado (aka Smith Island), with the northernmost mangroves in the foreground. Didn’t know Kirk and Charlene were that far north already. I won’t be up around BLA for another month or so. Nice hiking area in that area, as I recall.”

Someone even said Tiburon. Erm … you had your eyes closed, right, Robert?

However, the majority of readers came back with Honeymoon Cove on Isla Danzante. Jim Coggan, Randy Fraser, Skipper Steve, Arjan Bok, Lauralee Church, Mark Thompson and Steve Bondelid all said Honeymoon Cove. And Steve in particular ought to know, as, “Last time we decided to go in there, the black flies attacked by the millions!!”

But, as we are somewhat investigative in our approach, we don’t want to just assume that the majority is correct. So we did actually email Kirk and Char Wagner to ask where the photo was taken. At the time of writing this story we hadn’t yet received a reply. If you happen to be in touch with the couple, please ask them to check their inbox! 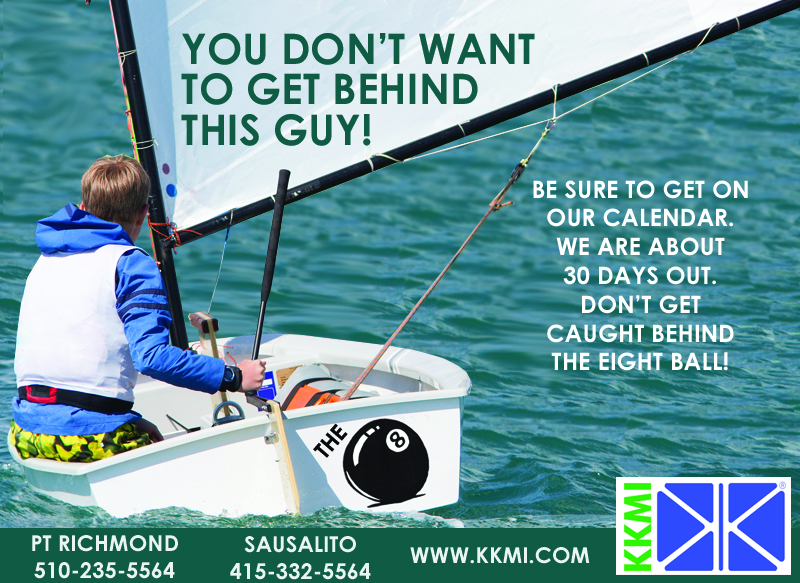 Don’t be stuck behind the eight ball. Book your boat in now with KKMI.

Could a little homemade sailboat find its way to Emery Cove, all the way from Hawaii? Kwenu was kayaking on the Bay out of his home port, Emery Cove, when he came across what he took to be a sailboat.

“I came across a small sailboat with the inscriptions on it saying that it had been launched from Hawaii to USF. I don’t know if this is was really from Hawaii or not, but I thought maybe one of your readers might know about it, or possibly be the person(s) who actually sent it on its way!”

“Its sails were completely gone when I came across it.”

“I have no idea if is even possible to make that crossing in that time frame, as I have no experience with sailing, let alone a crossing as such. One day hopefully I will try to crew and learn some sailing skills!”

Well, readers, it’s over to you again. Does anyone know anything about this little vessel?

The Yacht Racing Association’s Summer Series will kick off this Saturday, April 10, in conjunction with Berkeley Yacht Club’s Rollo Wheeler Regatta. You can sign up for either or both. “If you race under PHRF and are interested in joining this four-race-day series, sign up by Wednesday. You’ll automatically be added to Saturday of the Wheeler Regatta.” The Wheeler Regatta will conclude on Sunday with a pursuit race.

Next up on the YRA schedule is a Racing Rules Webinar. This session will discuss the changes that begin this year and their impact on race committees and race documents. Anyone involved in race committee work, or interested in it, will benefit. Mike Gross, Area G regional administrative judge, will lead the talk on Wednesday, April 14, starting at 7 p.m. The cost is $20. Register here.

In February, the Point Bonita Buoy, RG Fl(2+1) R6s Bell, broke free and went missing. The US Coast Guard has been publishing the information in the Local Notice to Mariners. They do plan to reset the buoy. “We hope to see it back on station by the end of spring,” commented the YRA. The buoy is used as a rounding mark in a few Bay Area races, including the YRA Encinal Regatta (ex-2nd Half Opener), scheduled this year for July 31. At Point Bonita the Golden Gate opens up into the Pacific Ocean.

Speaking of the Ocean…

…It’s about to open up. The OYRA ocean series offers divisions for fully crewed and shorthanded boats. The first race in the 2021 series will be the Lightship Regatta on April 17. Sign up for the Lightship by 5 p.m. on Thursday, April 15.

For more regattas from the YRA, clubs and associations around Northern California, see our 2021 Sailing Calendar, but also check Latitude 38’s monthly Calendar for updates in these shifty times.

SHARE ON Tweet Share Email Linkedln
1 Comment
Receive emails when 'Lectronic Latitude is updated. SUBSCRIBE
'Lectronic Latitude: Friday, Apr 2
Another Long Lost Sailboat
Searching for an Old Flame, ‘Kate II’
'Kate II' took a lot of kids sailing while she was the flagship of St. Francis Yacht Club, and she made me a happy skipper.
Rescued From Angel Island
A Fortunate Ending to a Soggy Pizza Lunch
We started the oven and heated a pizza, and while I took my first bite I felt rising water on my foot.
Sponsored Post
Westwind Boat Detailing Offers Washing, Waxing and Varnishing
Washing, waxing, varnishing. Serving the entire Bay Area for more than 30 years. “Everything looks great! It was a huge relief."
Sailboat Racing at Fiesta de Veleros
Talking About February’s Barra de Navidad Cruise-in Week
In December, we didn't think we could do any fundraising at all due to COVID restrictions preventing large gatherings, plus so many snowbirds aren't even here this year. So 'Baja Fog' floated the idea of a sailboat race …
Do you want fries with that?
Looking for a Fresh Seaweed Salad?
Water intake, fuel filters, oil filters, and water filters are all there to prevent problems. But if they're full of seaweed ...
Did you send us your photo?
Sailagram: A Snapshot of March Sailing
Did you get out sailing in March? It has been an incredible spring for many sailors. This month’s Sailagram feed is full of photos submitted by our readers, the real sailors who make our community so amazing.
More 'Lectronics »
Report Listing