On Monday we shared the story of the old wooden vessel Suisun, which sank in Richardson Bay  during a gale-force windstorm in late January. The story stirred up memories of Suisun‘s better days, during which she was a frequent member of the Bay Area’s social fleet. Suisun was built in 1914 and no doubt holds a lot of memories for many. Local sailor John ‘Woody’ Skoriak was one of the people who had firsthand encounters with the old boat in her glory days — he sent us his recollections.

“Among all the boats that have sunk these last few months, none has been sadder for me than the news about Suisun.”

“I was involved in the original restoration of Suisun many years ago in the mid-1980s, and crewed for her caretaker/restorer, Paul Stevenson. After Paul restored the boat we held a celebration and re-launch, and then gave complimentary charters aboard her on many weekends and special events — mostly with Sausalito Yacht Club members and VIPs, and for events like the America’s Cup practice trials and photoshoots, etc.

“During that time I was working as a yacht broker at Edgewater Yachts, and Paul worked there with me for several years. Paul was trying to sell Suisun after its restoration, but we used her for years. It was a fun boat, and we had a whole team of ‘engineers’ who had to come every time we went out and oil the Corliss 4-cylinder gas engine that was as big as a car. It was an amazing engine. [Latitude 38 writer John Riise tells us Suisun‘s engine was “a six-cylinder something or other” and “each of the cylinders was fed by a single carburetor from a Model A Ford … the engine room seemed to take up half the boat.”]

“Suisun had been built for the US Army Corps of Engineers as a Delta and Bay survey boat. But no expense was spared to build the boat. It was much more of a yacht than a working, commercial survey vessel. In fact, her original upholstery was mohair, and we replaced it with the same during the restoration.

“Suisun later had a fire on board while hauled out at Stone’s Boatyard Alameda, and the insurance did not cover the cost of repair. The boat languished until Paul finally found a buyer. There were many unsuccessful attempts to restore the boat, including one very amateurish and ill-equipped attempt by a Bay Model employee, which ended up with the first sinking of the boat. It seems it’s been downhill ever since.

“Paul and I were also involved with the 92-ft Blanchard-built fantail motor yacht Wanda, which has been shuffling between marinas and berths for the last few years, with attempts to restore it while chartering it. We sold Wanda several times (bank repo) at Edgewater, and Paul did years of restoration on it for an owner named Bill Kelly, who had an insurance company and had his whole office on the boat. We also took Wanda out almost every weekend during good weather for a few years.

“Suisun and Wanda were both berthed downtown at the Sausalito Yacht Harbor.

“I worked with a lot of classic wooden yachts in those days, and at the same time, I was mate and relief skipper on Fair Sarae, which Bill Bodle bought, restored, and re-named Eros. Fair Sarae was also in main harbor Sausalito, but was too big for inside so had to moor on the outside wall where the tugboats were. Fair Sarae was 103 feet long, without the bowsprit that Bill Bodle added on Eros.”

Suisun was also mentioned in Latitude 38 in October 1986. You can read that story here in our archives.

The 1970s and ’80s were prime times for sailing in Southern California. There were thousands of boats being built in the region, and the Long Beach boat show was one of the biggest in the world, with endless rows of sailboats on display in the Long Beach Convention Center. Times have changed, but during another trip to Long Beach to get familiar with our new Sabre 38 MkII, we couldn’t help noticing that Long Beach’s Shoreline Marina is still packed with sailboats, with Shoreline Yacht Club holding a ringside seat. Many of these boats were built in Costa Mesa in the ’70s or ’80s, and probably sold at the Long Beach Convention Center across the street. There are dozens of gorgeous new boats in the mix, and a look at the marina reminded us that sailing in Southern California is alive and well.

As you may have read, the pandemic year of 2020 actually turned out to be a banner year for sailing. Most of our yacht-broker customers report 2020 as being one of the best years ever — and for many, that goes back a long time. With most travel and family events canceled or curtailed, boating/sailing turned out to be one of the big winners in the economy. Looking across Shoreline Marina you can see sailing is clearly a prime pathway to enjoying a Southern California weekend. Just 25 miles to the west of all these boats is an escape to Catalina Island, and just 100 yards to the east are 20 million people trying to stay healthy. If you can swing it, having a sailboat in Southern California is an obvious choice.

One of the biggest challenges facing yacht brokers today is finding boats to sell — new or used. Demand is high, and people who might have considered parting with their boat are rediscovering why they bought a sailboat to begin with, and are making amends for past neglect by renovating their boats for continued use. Additionally, since the pandemic forced manufacturing shutdowns and continues to constrain work schedules, negotiating the supply chain for getting new boats isn’t easy either.

Another silver lining of the pandemic is all the boats from the ’70s and ’80s that are being restored by younger, first-time owners. After spending life between keyboards and cocktails you find it’s not all it’s cracked up to be. Shutting down social media and picking up an adjustable wrench, or mixing epoxy resin, is becoming a preferred option for many. Completing a project you can hold in your hands or show your friends in real life is a different type of accomplishment than having your code stored in a server farm near the Columbia River. Like Marissa and Chris (story in our current issue), who are restoring their Cheoy Lee 41, there are numerous sailors with similar projects underway up and down the coast. Sailor and writer Mitchell Andrus is bringing us a few more of those projects in our upcoming March issue. Instead of the ‘Maker Faire’ being a one-weekend event, it becomes part of your lifestyle, with ongoing, rewarding achievements. It’s cooler to serve cold beers from the galley you rebuilt yourself than from the Frigidaire you ordered from Amazon.

We’re also hearing about more people building or restoring a boat project in their garage. Do you have a project underway? Summer is coming so we hope you’ll be ready, but in the meantime, send a photo and a couple of paragraphs to editorial@latitude38.com.

If you live in densely populated Southern California you don’t have to go far to find yourself out in the ‘sticks.’ It’s not the 1980s anymore, but as always, it’s still a good time to be a sailor in Southern California, or anywhere. 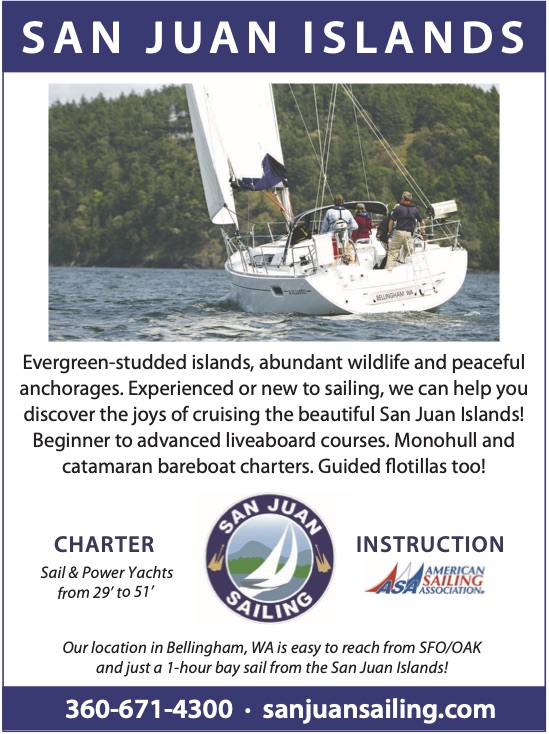 Rated #1 in the world by the readers of Cruising World in customer service and in charter value.
We don’t try to be the biggest … but we passionately want to be the best.

“If there is one thing this pandemic has taught us, it’s got to be how to be nimble and adapt to the constant need to change the best laid plans,” writes the YRA. “Due to some logistics issues with COVID, we’ve had to change up our new Doublehanded Series. The good news? It’s still definitely happening!”

“The two SSS races, the Corinthian and the Round the Rocks Race, are no longer part of the series. Those two dates are being rescheduled and replaced with two new doublehanded-only YRA races. We will get the new schedule of dates out as soon as possible. We’re planning a kick-off date of March 14 for the first race.”

The change will please those competitors who wanted to race singlehanded in the SSS series, and still participate in the YRA’s new four-race doublehanded series. The two SSS races are scheduled for February 27 (Corinthian) and March 27 (Round the Rocks). “Corinthian” is now a misnomer, as that race will start and finish in front of the Golden Gate Yacht Club in San Francisco instead of the Corinthian in Tiburon.

The SSS capped entries at 150, reached within two days. But, hold on, there’s hope yet if you didn’t make the first cut. The SSS reopened entries, and they’ve reached 182 sign-ups as of this morning. Registration will close for good next Wednesday night, February 24. The skippers’ meeting (via Zoom) that night will double as the awards meeting for the Three Bridge Fiasco.

Have you updated your knowledge of the Racing Rules of Sailing? The YRA is inviting sailors to an online rules talk by Rob Overton next Thursday, February 25, 7:30-9 p.m. Overton serves on the US Sailing Racing Rules Committee. He’ll discuss the changes in the 2021-2024 RRS, why those changes were put in, and how the changes will impact us as racers. The cost is $25. Learn more and register here. Incidentally, we profiled Rob and his family in the December 2019 issue of Latitude 38.

Following all the hullaballoo on Wednesday, a canceled race day, the Prada Cup resumes Saturday, which is already today in New Zealand.

New Zealand’s government moved to Level 3 COVID restrictions in Auckland following two new community cases on Sunday. Prada Cup racing took a five-day break. But now racing is planned for every day until one competitor gets to 7 points, or by the end of the schedule on February 24, whichever comes first.

The government moved to Level 2 on Wednesday. Under Level 2, crowds of more than 100 will be unable to gather to spectate ashore. Activities such as the dock-out show, race screening and other public events have been suspended. Race courses B and C, those closest to shore, will not be used, in order to discourage large public gatherings on land. Spectators can still head out to watch the racing on the water.

During the break, the two teams, Luna Rossa Prada Pirelli, which has so far shut out their rivals, and INEOS Team UK, could choose to spend time tweaking their AC75s in the shed, and/or practice out on the water. Each chose a mixture of both. The two teams spent long hours afloat.

See www.americascup.com for all the latest.

SHARE ON Tweet Share Email
Leave a comment
Receive emails when 'Lectronic Latitude is updated. SUBSCRIBE
'Lectronic Latitude: Wednesday, Feb 17
Another Boat Hits the Bottom
Sailboat Explosion Alarms Sausalito Waterfront
A sailboat exploded and sank on Richardson Bay, alarming nearby residents. Fortunately there were no serious injuries.
New Vessel to Tackle Floating Plastics
Giant Catamaran ‘Manta’ Prepares to Take on Ocean Plastics
The SeaCleaners has unveiled the Manta, a giant catamaran designed to collect and process large quantities of floating plastic macro-waste at sea.
Sponsored Post
Division of Boating and Waterways Boater Card
The California Boater Card shows that its holder has successfully taken and passed a NASBLA/state-approved boater safety education examination.
The Dilemma of Casting Off
Should I Sail Away? What Would You Do?
Sailors often ponder the question of whether to stay put, or sail away. Some know the answer before the question even arises, while others take time to deliberate. What would you do?
America's Cup Commentary
The ACE Who Kicked the Hornet’s Nest
The America's Cup Event (ACE) has stirred up a hornet’s nest in what seems to be an attempt to slow down Challenger of Record (CoR) Luna Rossa Prada Pirelli's march to winning the Prada Cup.
More 'Lectronics »