Run every four years, the Vendée Globe singlehanded around-the-world race will start on this Sunday, November 8, at 1 p.m. local time off Les Sables-d’Olonne, France. The boats are all box-rule IMOCA 60s of varying ages and technologies. Just like in our Bay Area Singlehanded Sailing Society boats, the spread ranges from ‘spend all you can to win’ to ‘run what you brung’. Most skippers are French, with a few Brits and a smattering of other nationalities represented. Some are repeat offenders from earlier Vendées. Some are first-timers. Six competitors are women, a record for the race.

Starting from the top, ‘spend money’ campaigns with the best chance of winning are:

Among “I have only this boat I can afford to race” entries are:

The top women with a chance to win are:

You can view the race online, check the tracker, watch the onboard videos every day, and keep up by going to: www.vendeeglobe.org/en. Another great site about all the boats and racers is www.imoca.org/en/races/imoca-globe-series/vendee-globe. And North Sails posts a well-produced video series hosted by Loïck Peyron on YouTube: https://www.youtube.com/results?search_query=north+sails+vendee+globe.

In mid-October, after a summer of bizarre weather, it was 80-plus degrees and windless at Latitude’s satellite office in San Quentin Village. The Bay went completely glassy for almost five days in a row — conditions that are otherwise unheard of on this always-some-kind-of-wind stretch of water. In these rare, placid moments, I grab an old, fiberglass windsurf board and go for a paddle.

On about day three of the ‘paddle-athon’, I spotted two alien craft skimming the water. Oh, right, they were electric foilboards, I realized, which is now apparently a thing. Each rider seemed competent, but both took the occasional fall. They were in the Larkspur Channel as a ferry, outbound for San Francisco and still in the five-mile-an-hour zone, made its way past San Quentin Prison and into the Bay. I was about 200 yards outside the narrow channel as the foilboarders headed west and toward the oncoming ferry; they were sort of half in and half out of the channel, circling in front of the ferry’s course — not unlike buzzing flies. (I don’t mean to imply anything derogative by that analogy. I’m referring more to their swift, erratic, hovering motion.)

I found myself growing anxious and having the strong opinion that the foilboarders should head left and unmistakably out of the channel — immediately; the time had more than passed for the riders to make clear their intention to yield to a vessel restricted by draft and maneuverability. As the ferry hit the gas and got up to its 20-plus-knot cruising speed, one of the boarders crossed in front of the oncoming vessel at a distance of what I guess was well less than 100 yards. I fully expected the ferry to give a short blast to voice its displeasure (or my displeasure). It didn’t.

“You [email protected]*ing idiot,” I thought. I was tempted to yell at the rider, but the foilboarder was just out of outrage range.

I don’t recall when I had the epiphany that I almost wanted the foilboarders to be in the wrong. Maybe I wanted to lord my sense of superior, cautious seamanship over some poor hapless fool whom I deemed in violation of the code. That I was so outraged was a startling realization, and now I felt in the wrong, but wrong in the right way, I guess. (I should also say here that many of you would be appalled at my safety choices on the water, so please don’t hear me claiming I’m holier than thou.) If I’d had the chance to speak with the two riders after some time had passed, I would have stuck a conciliatory tone, asking them to consider giving decisive way to a vessel in the future, adding that in addition to that course of action being an infinitely safer choice for them, it’s also the considerate thing to do for the skipper of a vessel. Oh yeah, and it’s the law.

Nothing brings out comments from Latitude Nation like questions of safety and rules of the road. We even have what we’ll call a committed “safety squad,” or readers who reliably chime in, or wag their finger (as I was ready to do) when there’s even a perceived infraction.

There’s no denying that certain groups of watercraft users are less likely to know and practice the rules than others. In this month’s Letters, Dave Cowell of the Islander 30 Mas Tiempo noted the abundance of kayaks in the Delta this summer, saying, “It’s curious how all of us have to go through the Cal Boat Card [CBC] routine, but not paddlers — be they kayakers, SUPers or rowers, they don’t seem to have to get any education before mixing it up with the rest of us.” Vendors and retailers and rental companies must, for the moment, be the de facto governing bodies and executors of the rules of the road to a growing swath of users. But sometimes, it feels like that responsibility falls on us.

Anyway, here’s the question that I really want to ask: Have you ever caught yourself being unexpectedly outraged at someone breaking the rules of the road? Maybe your cause was legitimate and your anger righteous, but maybe you caught yourself in mid-rant. What is the best strategy, tone and reaction when someone is unaware of the rules? In the heat of the moment, I would have felt more than justified in shaming and embarrassing those foilboarders. More broadly, if sailors are always yelling at non-sailors on the water, then resentment is likely to fester. Isn’t the better strategy to bring those who are unaware into the cadre of mariners looking out for one another?

Or is the occasional tongue-lashing in order? 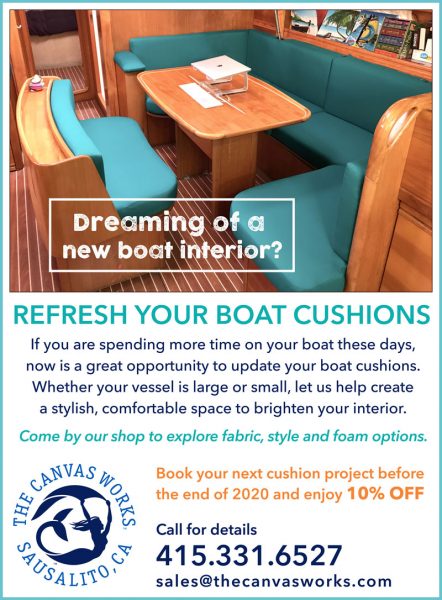 The spirit of the regatta is to encourage more women, couples, friends and families to sail and race together. For many of the participants, this was their first racing opportunity. For several it was their first time doublehanding a boat and not sailing with a full crew.

There was close racing among the six Santa Cruz 27s, with Evan Diola on Mistress Quickly beating Rachel Cherry and Mark Voropayev on Kasatka in B Division. For many parents, this is a great opportunity to share their passion for sailing with their kids. Ryan and Janel’s kids on Hanalei demonstrated their Schuyler racing skills to win in the family division. However, the youngest crew were Gary and Evgenia Mirfield’s 7-year-old Nickolas and 10-year-old Alex aboard their family’s SC27, Good Timing.

Several dads in the club were reuniting with their sailing daughters, such as Craig Smith on the SC27 Don Quixote, Chris and Rachel Hofmann on the Santana 22 Odonata, and Vern Wallace and Cindy Rodrigues on Seabird. Stefan Berlinski sailed with his wife, Mary, in the Families division on the Santana 22 Hamachi.

Steve and Sara Bourdow on Mooregasm won the start among the nine Moore 24s. Tom Conerly and Amy on No Wildfire rounded the weather mark in first and finished second overall. Scott Nelson and Karen Loutzenheiser on Lowly Worm 2.0 sailed brilliantly on rhumb line, while every other boat was seeking better pressure, to win overall out of 13 boats in B Division.

Mike Evans and Nancy Rinkardt on the Moore 24 Tonopah Low had an impressive win in Jib and Main. The Lighthall 30 New Wave, with Mark Merritt and Janell Hillman, came in second. Moore 24 #101, with Mike McCarthy and his first-time-racing gal, came in third in a fleet of 11 entries.

JV Gilmore was determined to make the race, so he singlehanded, with his dog Noche, from San Francisco to Santa Cruz, proving that Less Is Moore is an apt name for his Moore 24.

This  popular mixed-gender shorthanded sailing event reflects our club’s interest in developing the next generation of sailors. It highlights an opportunity to develop an outstanding caliber of women sailors and couples. Many of the doublehanded sailors have gone on to own their own boats, race internationally, or do regattas like the Doublehanded Farallones, Three Bridge Fiasco, Pacific Cup and Transpac.

We all love getting up close and personal with whales. But what happens when we get too close? According to a report on abc7.com, two kayakers almost found themselves on the whales’ lunch menu while enjoying a peaceful paddle at Avila Beach, CA.

Julie McSorley and Liz Cottriel were watching humpback whales from around 30 feet away on Monday when one whale came up underneath them and caused them to capsize.

“I saw the big pool of fish, the big bait ball come up out of the water,” McSorley reportedly said. “I saw the whale come up. I thought, ‘Oh, no! It’s too close.'”

Cottriel reportedly commented, “I’m thinking to myself, ‘I’m gonna push.’ Like, I’m gonna push a whale out of the way! It was the weirdest thought. I’m thinking, ‘I’m dead. I’m dead.’ I thought it was gonna land on me.”

The women quickly resurfaced, and nearby kayakers and paddleboarders went to their aid. They were then able to paddle to shore, apparently unharmed.

Footage of the incident was captured in two separate videos in which it appears as though the kayakers are being swallowed by the whale.

“The whale was right here in my face, literally,” Cottriel told reporters.

We’re all told that humpback whales typically feed on krill and small fish. So although Cottriel and McSorley no doubt felt as if they were food, it’s more likely that they just happened to be in the wrong spot at the wrong time.

SHARE ON Tweet Share Email Linkedln
Leave a comment
Receive emails when 'Lectronic Latitude is updated. SUBSCRIBE
'Lectronic Latitude: Wednesday, Nov 4
North Bay Sailors Head Up River
Downtown Petaluma Reopens to Boaters After Dredging
Petaluma River is again open to boaters since the completion of dredging in mid-October.
When a Potter is Not a Potter
Pottering About with the Potters
Small-boat sailing has a good following on the Bay. Check out some of these photos of Potters and Montgomery 17s in action.
Sponsored Post
Twin Rivers Marine Insurance Opens New Location
Gary Clausen of Twin Rivers Marine Insurance has been serving the needs of his clients in all of California for many years.
Sailing Away From Diesel
Euphoria and Electric Propulsion
With a diesel engine that was not only unreliable but leaked and stank, David faced an expensive and lengthy rebuild or re-power.
The Lead-up to the Vendée Globe
Cape Horners Launch Register of Solo Circumnavigators
The International Association of Cape Horners has taken on the mantle of maintaining an official register of those who have completed solo circumnavigations via the Three Great Capes.
More 'Lectronics »
Report Listing