Early Saturday morning, a four-alarm fire broke out on Pier 45 on San Francisco’s Embarcadero. The cause of the fire is still unknown, but the devastation wrought on the fishing and crabbing industry, which was already suffering from the pandemic, cannot be overstated. The warehouse stored some $9 million worth of fishing gear, according to KQED News; about 30 crabbers and fisherman lost up to $300,000 each in equipment.

According to KQED, the Port of San Francisco requires tenants to have insurance. “As of Sunday, the San Francisco Crab Boat Owners Association said it was unsure how much of the equipment loss insurance would cover — if any at all.”

“The business of crabbing is an inextricable part of what San Francisco is. It’s part of our reputation and our economy,” San Francisco Supervisor Aaron Peskin, who represents Fisherman’s Wharf, was quoted as saying by KQED. “We’ve got a little bit of time between now and November to figure this thing out, but if it’s a philanthropic campaign or assistance, we need to get the crabbers back on their feet.”

“Pier 45 is the heart and soul of commercial fishing out of the Bay Area,” Larry ‘Diver Duck’ Collins, the head of the San Francisco Community Fishing Association, told the San Francisco Chronicle. “To take a hit like this, it’s a bad one. Most people don’t think about where their salmon, crab or black cod come from, but that’s where: It’s Pier 45.”

The Broderick grandsons, last seen ‘sailing’ Grandpa’s Voyager 14 in the driveway, took to the real water Memorial Day Sunday in Grandpa’s Wyliecat 30 Nancy. The whole family’s been living together since the Tubbs Fire in 2017, so met the ‘sailing household’ requirement. Pat Broderick’s son Larry and daughter-in-law Sameth joined his three grandsons Elljay, 12, Preston, 10, and Tyler, 7, and enjoyed a few hours on the Bay, escaping Santa Rosa’s heat in a real boat on real water.

Memorial Day Sunday was bright, with a moderate southwesterly wind with a moderate flood. Before leaving the berth, everyone voted for a sail under the Golden Gate Bridge. So, using a San Francisco Bay chart, the boys plotted a course from Sausalito across to Fort Point, then a tack along the South Tower and under the bridge. Crossing toward San Francisco close-hauled in mid-teen southwest wind made for an exciting ride, as Nancy’s bow dug into one of the tidal swirls and the flood pushed the bow away from the plotted Fort Point landfall.

After Nancy dipped under the bridge, the southwesterly wind provided a nice broad reach down the San Francisco shoreline toward Fisherman’s Wharf. One point of interest on the to-do list was taking a look at Saturday’s Pier 45 fire and the Jeremiah O’Brien. “The boys had noticed a slight gray haze coming off the pier as we sailed across the Bay, and commented that the fire wasn’t completely out,” reports Pat. “As we passed the St. Francis Yacht Club, a large black smoke cloud suddenly blossomed up, obscuring the Fisherman’s Wharf area. The fire had rekindled at the end of the pier. The Jeremiah O’Brien disappeared into the blackness.”

(For our report on the Pier 45 fire, see today’s top story.)

The boys observed flames inside the warehouse windows and the San Francisco fireboat Francis approaching from Pier 39. The large red fireboat nosed up to the pier under the O’Brien’s stern and began hosing down the flareup. In short order the thick black smoke turned to white and the O’Brien re-appeared. The Memorial Sunday sail’s most exciting moments.

“We jibed and sailed along the west side of Alcatraz Island on our way back to Sausalito, observing an orderly procession of sailboats tacking up alongside the island and heading for Angel Island before sailing back toward the East Bay. Some notable racing boats just happened to be part of the orderly procession, and it appeared most were being doublehanded.”

Each grandson got a turn on the tiller and took a hand in trimming the sail. They saw harbor seals, California sea lions, sea gulls, pelicans, cormorants and one lone foiling kite sailor. And the fireboat. They agreed it had been a good sail, but that they were ready to sail home.

“We continued into Richardson Bay, dropped the sail, and found the berth. While Grandpa put the boat away, the boys and their parents made a run to the takeout at McDonald’s. By the time they got back, the sail cover was on and the boat was straightened up, ready for a late Big Mac lunch in the cockpit before heading back toward Santa Rosa on Highway 101 with the van’s air conditioner blowing salty hair.”

Delta waters were super-busy on the weekend — some locations were reminiscent of a pre-COVID summer. But not all venues attracted crowds. Continuing her solo Delta ramble aboard the Cal 2-27 Dura Mater, Jackie Philpott found an idyllic anchorage in one of the lesser-known sloughs — and had it all to herself.

“Brother John and I had a great first day of sailing last Saturday on Folsom Lake,” writes Pat McIntosh of the West Wight Potter 19 Ramblin’ Rose. “We even got the Potter up to hull speed on a reach. The lake is still rising from runoff, so it looks like boats may still be in the water after the first of August.” (When the lake level gets too low, the boats must haul out.)

“We had a great Show ‘n’ Go Regatta at Whiskeytown Saturday and Sunday,” wrote Mike Strahle. The regatta had no registration, no race committee, no skippers’ meeting and no trophy ceremony. We’ll have more in Racing Sheet in the July issue of Latitude 38. 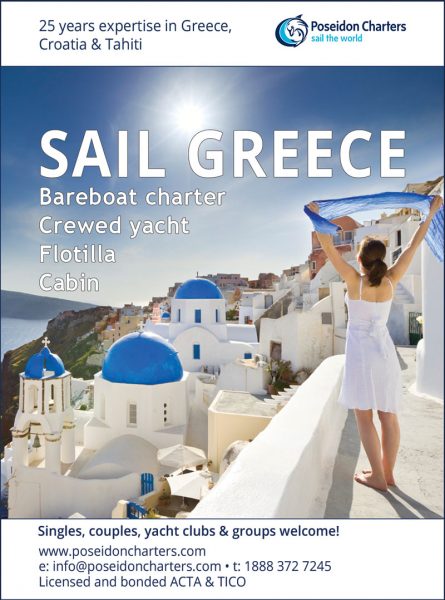 Poseidon Charters has 25 years of expertise in Greece, Croatia and Tahiti.

Kaneohe Yacht Club’s Junior Program is an advanced, high-tech sailing laboratory where junior sailors learn the latest techniques. Here we see a group of them absolutely sending it in their O’Pen Skiffs. Next, a fly-by: It’s not the Starship Enterprise — it’s a Waszp! Sending it!

Sailing season has begun in many parts of the world, and you’re probably stuck at home! Even if you’re lucky enough to be able to sail safely, you may be doing it alone or with your immediate family, and missing the camaraderie and fun of being with other sailors.

Rather than being an online game where you might drive a boat around a racecourse, SL is an immersive virtual world, and everything in it beyond the bare platform is built by its “Residents.” These are real-world people who enjoy the human interaction that makes SL a unique experience. In the case of sailing, they are creating and enjoying yacht clubs, cruises, lighthouses, racecourses and islands, all without leaving home. In SL, people connect, talk, dance, and sail with others around the world.

And the boats! You are skipper, at the helm sailing a dinghy or yacht programmed to behave just like a real-world boat. They sense wind, waves, and currents; they heel when your sails are trimmed tightly; the best boats know when an upwind boat has blocked your wind. Nearly all can be customized with your own graphics, making every virtual boat as individual as its owner.

There’s lots to do for any real-life (RL) sailor venturing into Second Life. But for Sailstice, yacht clubs are planning races, cruises, and parties throughout the day that will be spread across many square miles of oceans and channels.

Interested in being a part of Summer Sailstice in Second Life? You need to do three things:

You’ll absolutely want to log in and explore; the SailVirtual.com website has suggestions of places to go. There are always experienced SL sailors willing to help you, and lots of help available on the Second Life website.

Sign up early so you have time to learn your way around, and even get in some sailing practice. You’ll find you use everything you’ve ever learned about the techniques of sailing, and keep those skills honed while you shelter at home.

If you can get out on real water on June 20, by all means, do it! But if you’re at home, come join us in Second Life. We promise a great day.

Dave Bloch, a Staff Commodore of Island Yacht Club in Alameda, is coordinating all virtual Summer Sailstice events in Second Life. Dave is passionate about sharing Second Life sailing with the world.

SHARE ON Tweet Share Email Linkedln
Leave a comment
Receive emails when 'Lectronic Latitude is updated. SUBSCRIBE
'Lectronic Latitude: Friday, May 22
In Harmony with Nature
Monterey Bay Instead of the Pacific Cup
When I made plans earlier in the week to sail out of Moss Landing with my friend and mentor George Mckay, I felt a tension ease out of my shoulders that I hadn’t really been cognizant was there.
Coast Guard Rescues Three off Sailboat Near Half Moon Bay
On late Tuesday night/early Wednesday morning, the Coast Guard rescued three people from a 30-ft sailboat off Pillar Point.
Sponsored Post
Passage Nautical Offers Beneteau Oceanis 41 for Sale
The 2014 Beneteau Oceanis 41 Scarlet Fire is offered by Deborah Reynolds of Passage Nautical.
Thanks to Phase 2
Some Launch Ramps Have Reopened
"We are among the first of the sailboats back on Folsom Lake, finally," wrote Pat McIntosh. Pat and his family had a short sail on Saturday afternoon.
The Baja Bash
How to Get Your Boat Home from Mexico
With seaports around the world closed to unfamiliar vessels, it’s not surprising that sailors are left wondering what to do when they and their beloved sailboat are sheltering in different countries.
More 'Lectronics »
Report Listing